Does anyone know a single person who enjoys shopping for sex-related products in drugstores? From hideous packaging to creepy names to the overabundance of available styles—right up to the part where you make uncomfortable eye contact with the cashier—I can't think of a single enjoyable step in the process. Considering that sex should be an enjoyable activity for everyone, shouldn't there be a way to eliminate stress from point of purchase to use? 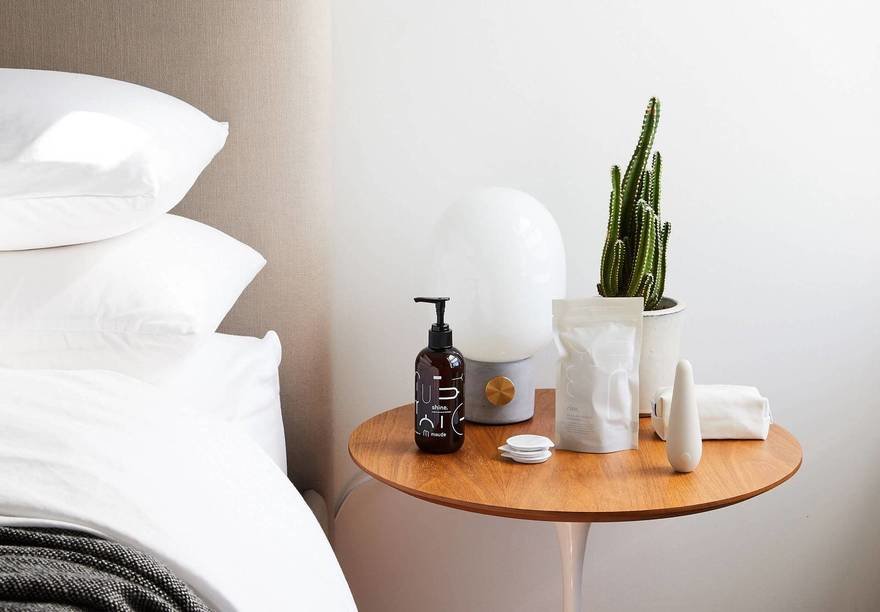 Goicochea and Epstein's decision to tackle this design problem stemmed from frustration with the lack of outside voices in the industry and the separation between protection and toys in drugstores. "Purchasing condoms and toys are two very disconnected experiences that are equally as uncomfortable," said Goicochea. "We wanted to question why these products aren't put together and try to understand why they are positioned and marketed the way they are." Epstein, who has previous experience designing product for Doc Johnson added that, "It's mostly men in boardrooms making all the decisions. There's such a wide variety of products, but they're all coming from the same people."

"To treat all of these items equally was really important to us." -Epstein 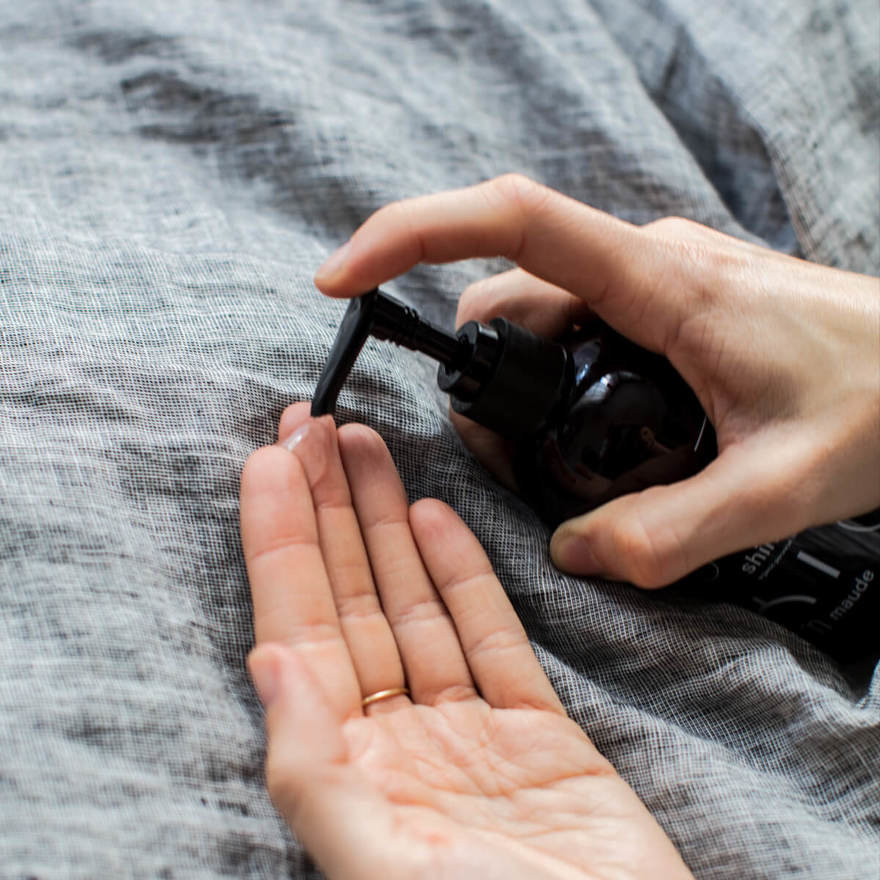 To begin approaching possible solutions, Goicochea and Epstein conducted a survey of around 700 people and found that the responses were similar across the board. Overall, consumers of all ages and sexual identities had negative feelings towards the general messaging of sex-related products, and because of this, most didn't have any type of brand loyalty in this space.

Many survey participants were also concerned with quality, which Goicochea and Epstein were careful to address in their design and manufacturing processes. "We wanted to go to the factories that produced the best quality," assured Goicochea. "We designed the vibe in-house, we worked with factories to formulate the lubricant, and the condoms are from the biggest producer in the world." 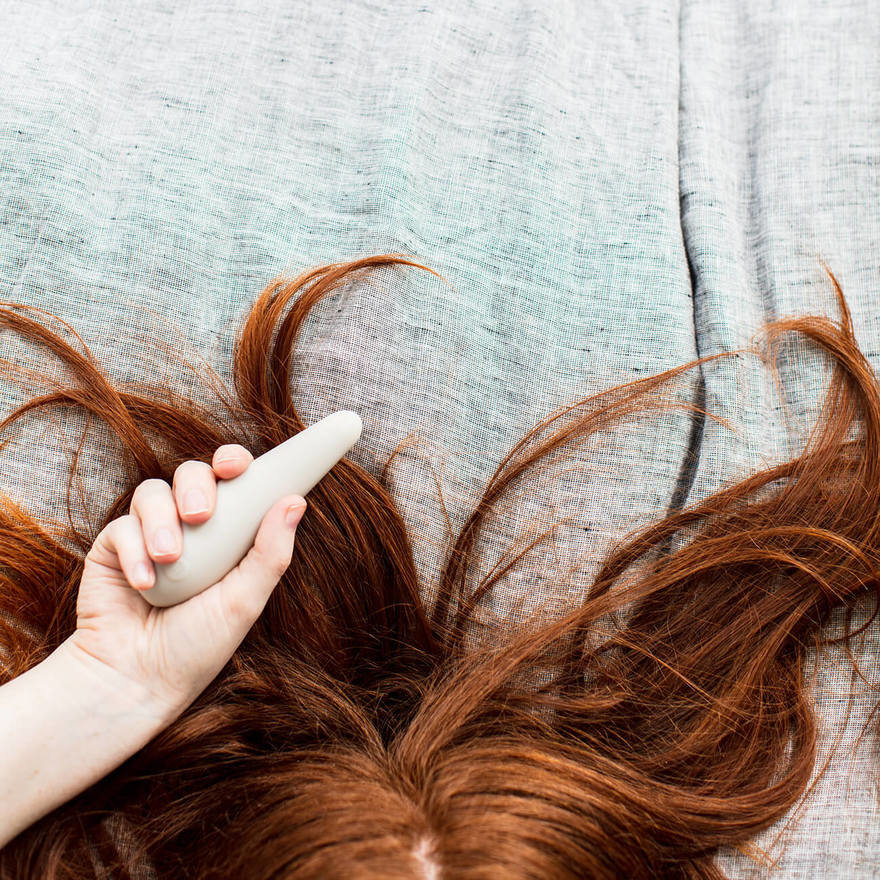 In terms of figuring out a target market, the duo wanted to break away from current trends to focus on a broader audience. "Bigger companies can't take risks, and smaller companies tend to speak to smaller groups because it's easier to have one voice instead of saying their products are for everyone," said Goicochea. "I think it's the trend as of late to have a female-focused brand, but what we heard over and over again in the survey was people saying, 'I'm a man, I'm gay or I'm older—I'm not a 25 year old woman, but I still want to talk about this subject." 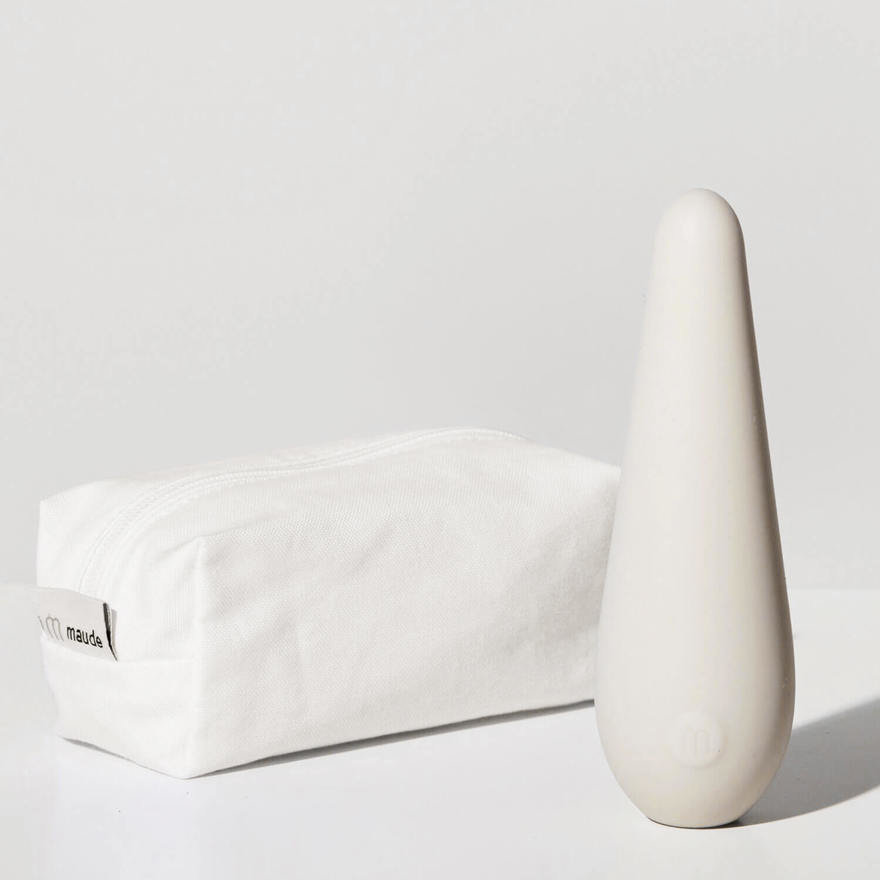 "vibe. is pretty universal in its approach and is meant to be used however you want it to be used," noted Goicochea. The vibrator's instruction guide lists recommended uses ranging from the expected to the unexpected, my personal favorite being hand massager—it really is for the people!

Maude's condoms, named rise. ($12 for a pack of 10), act as the bread and butter of the line since they need the most replacing. Maude's condoms are made by the largest condom manufacturer, so the main difference between rise. and, say, Trojan is the packaging. 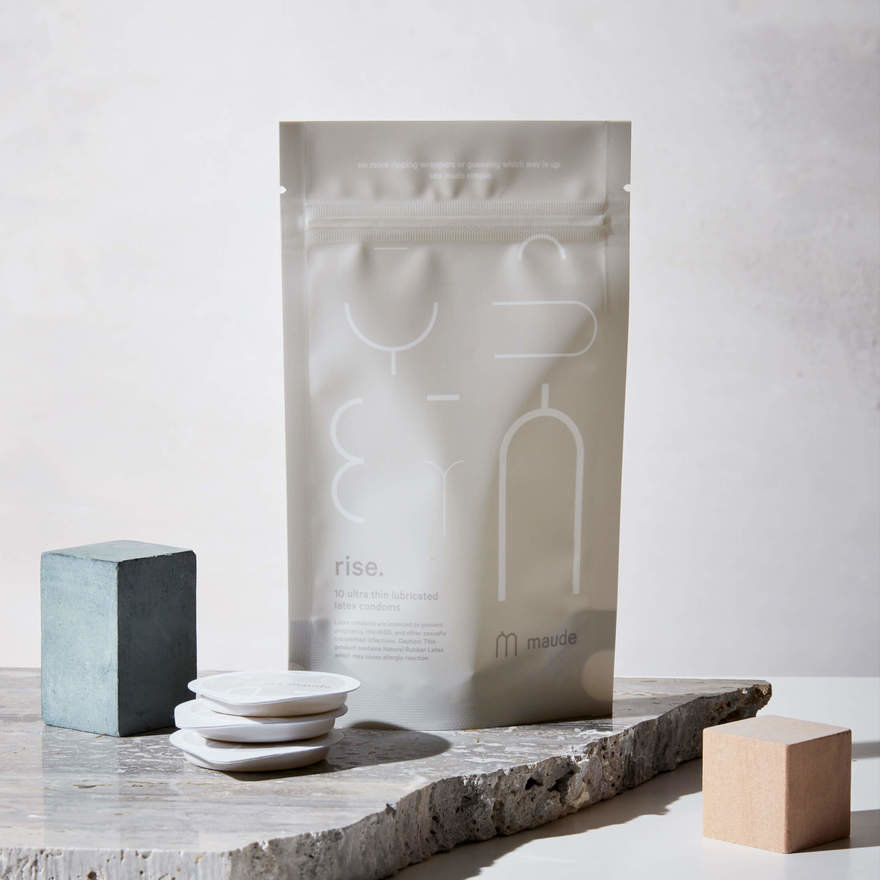 Trojan and almost all other condom brands make use of the classic tear-open packaging, while rise. condoms come in cups that can easily peel open. And to be completely honest, the graphics are way more appealing and less aggressive than this: 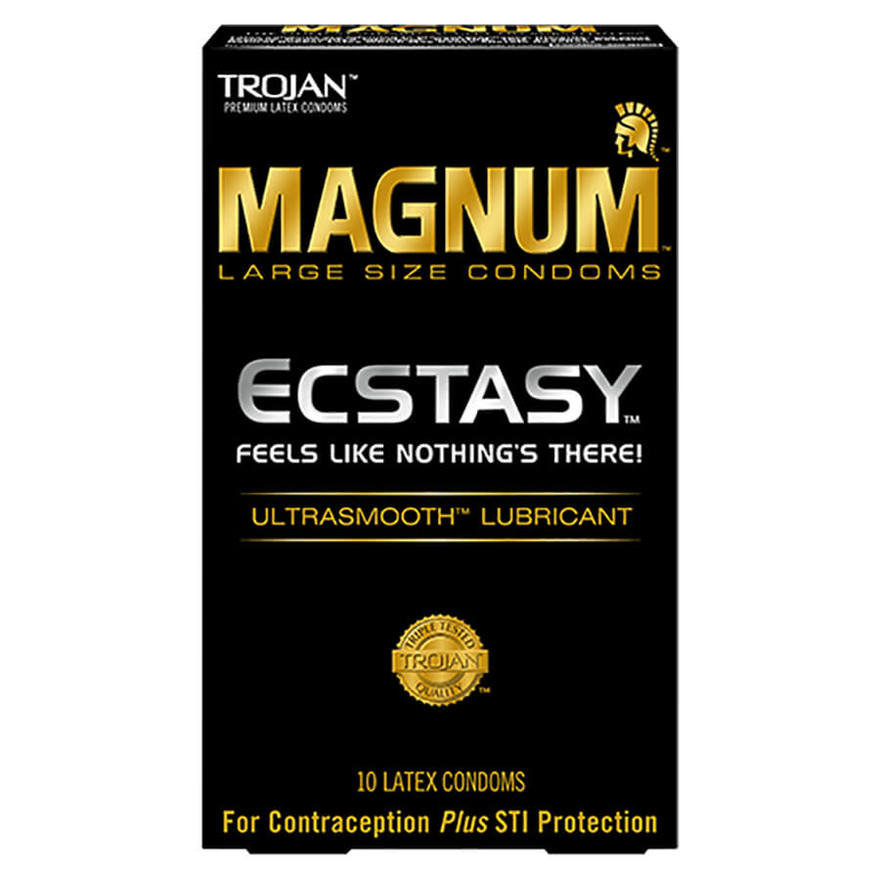 In terms of the lubricants, named shine. ($25 for 8oz), the most interesting part of the packaging is the pump bottle, which is similar to liquid soap. So whatever you do, don't put it near the sink. shine. comes in two varieties—silicone and organic for those that like to know their products are all-natural. The product line as a whole is subtly designed, so if you prefer to have your lubricant on your bedside table, it'll at least blend nicely with its surroundings.

"I left the industry for a reason—your mind can wander with that reason—but I still believed this space needed to be redefined." - Epstein 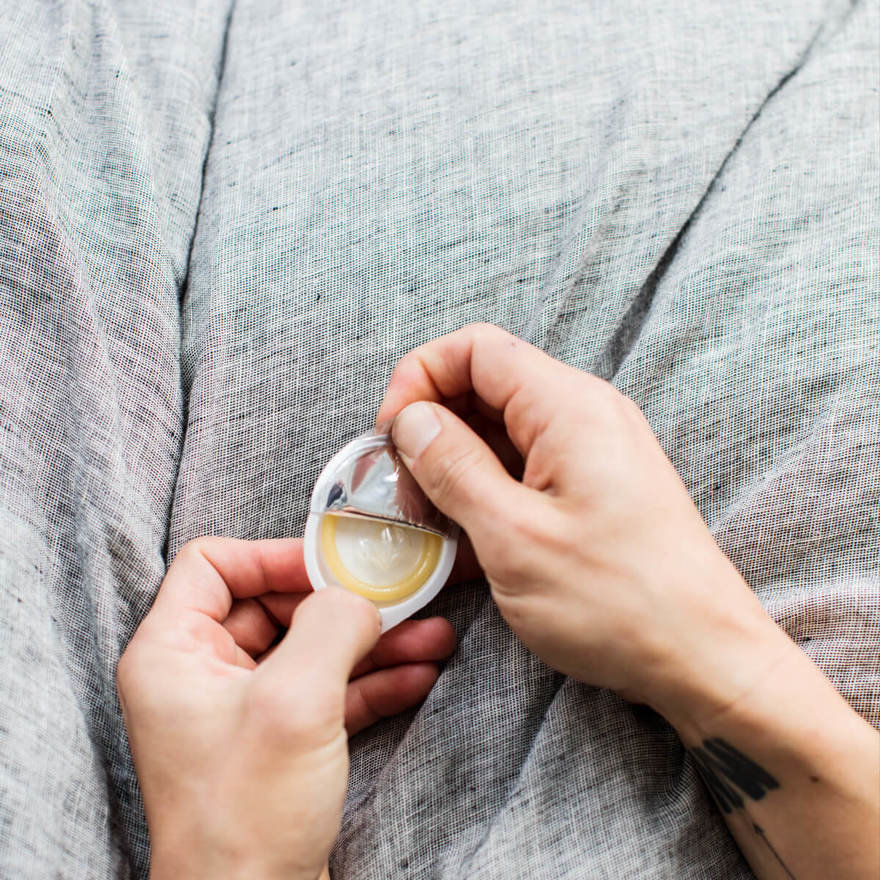 When you really think about it, little to no condom brands sell their products directly online. "No pun intended, but we wanted to remove the barriers to entry," said Goicochea. "We can't compete with the distribution of Trojan, so the idea is that it's affordable, it's easy to buy on our website, and you're not being tracked the way you would with Amazon. We're trying to compete as best we can online."

The competitive price-points of the entire collection stood out to us, and Epstein noted that, "Nobody that's trying to enter this market really has a background in sex product design, which is part of the reason why our pricing is so good. The factories that we work with are relationships that we've either built over the two and a half years of ideation of the brand or people that I've known for years and years."

What's Next for Maude? 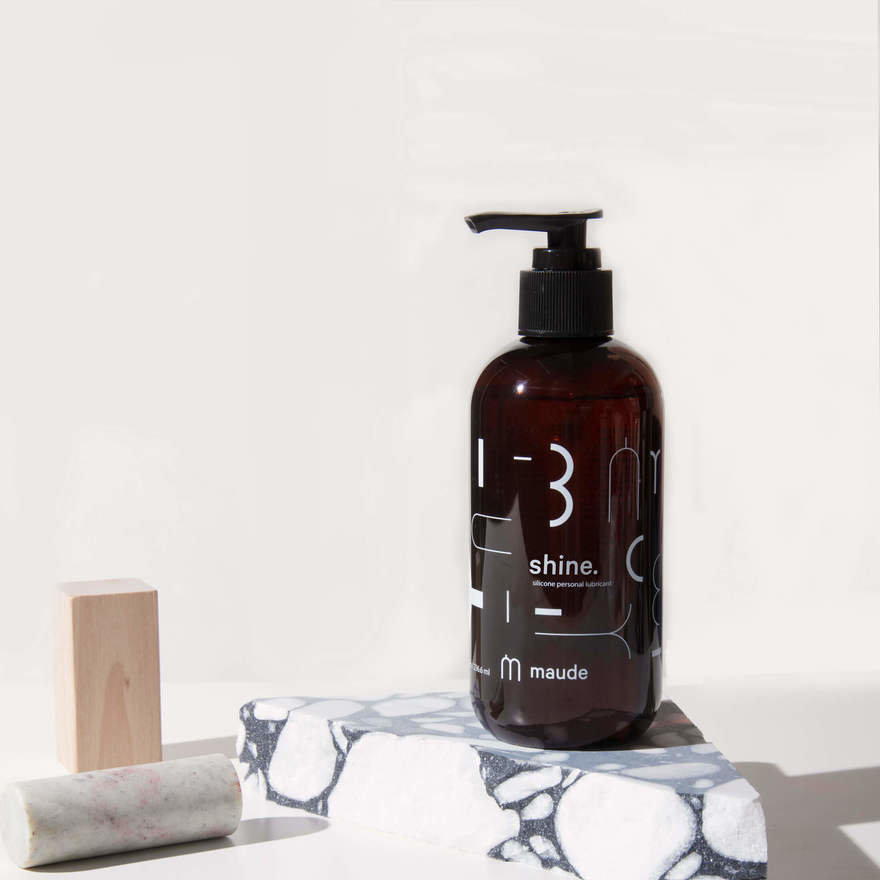 Goicochea was quick to describe starting your own business like constantly trying to get your footing on a surfboard, but that's not stopping the team from wanting to tackle the next round of sex essentials they feel need an upgrade. "We're going to start thinking through other products in this market that either aren't around or can be reinvented. We have this interesting opportunity to be in places that are unexpected and work with unexpected partners, and that's really the excitement with the first year," Goicochea explained. "I think I can speak for both of us when I say we're both problem solvers," Epstein added. "That never stopped when we were at bigger companies, and now with Maude we're constantly solving problems and our minds are always working. It's wonderful."

Browse Maude's website here to learn more about how the company is redefining the experience of purchasing and enjoying sex essentials.