Epic Games is in the process of rolling out an exciting new design visualization tool based on their popular game engine Unreal 4. Currently in open beta, Unreal Studio is intended to bring real time rendering to design visualization and provide industrial designers and architects tools to create fast, stunningly beautiful animations, walk-throughs, renderings and interactive product demonstrations. The technology is already in use by some major companies as Epic is betting on a recent trend toward real-time rendering as it seeks to position Unreal as a go-to tool for real time rendering for industrial design.

The real time aspect of Unreal piqued my interest because, let's face it, no one enjoys the monotony of waiting for for a scene to render only to realize there are changes to be made. Epic's recent collaboration in real-time ray tracing with NVIDIA and ILM-xLAB featured at GDC 2018 is a beautiful preview of where this technology is headed. It is also convincing evidence that Epic is not playing around as they strive to deliver higher levels of visual quality while pushing real-time rendering into the workflows of the industrial design and architecture industries.

Before getting started with Unreal I had a chance to chat with Chris Murray, Epic's Technical Marketing Manager for Enterprise. Chris filled me in on the concept behind Unreal Studio and the vision behind it at Epic. The goal is to introduce Unreal Studio to the design visualization space to give industrial, product, environmental, and architectural designers tools to use real-time rendering as part of the design visualization workflow. The studio offering will also include industry specific support for designers and the like.

According to Chris the advantage of this approach is to shave hours, days and maybe weeks off the process of visualization with real-time tools that allow designers to make changes to everything from scene assets, materials, colors, finishes, and lighting more quickly. Because Unreal is a game engine it is ready to present these real time rendered visualizations through interactive web, VR and AR experiences. Currently, and through November of this year, Unreal Studio is available as a free open beta to anyone who signs up.

Unreal Studio is closely integrated into Unreal Engine 4 as it layers on new tools to the existing game engine. New templates and blueprints (which are simply pre-packaged code for specific applications) create new starting points that are geared toward design applications. The Unreal Studio download includes these features:

The Datasmith tools and learning resources are the cornerstones of Epic Enterprise's effort to create Unreal Studio. To give industrial designers a "frictionless" path to move CAD resources into Unreal, Datasmith includes a set of importers to bring models directly into Unreal Studio for realtime rendering. The importers include support for industry favorites like SolidWorks and AutoDesk Inventor file formats as well as Catia, Pro/E and many standard formats like IGES and STEP files. The 3DS Max Exporter plugin provides the ability to export 3DS Max scenes to a Datasmith file format ready to import into Unreal with standard materials and lighting intact. 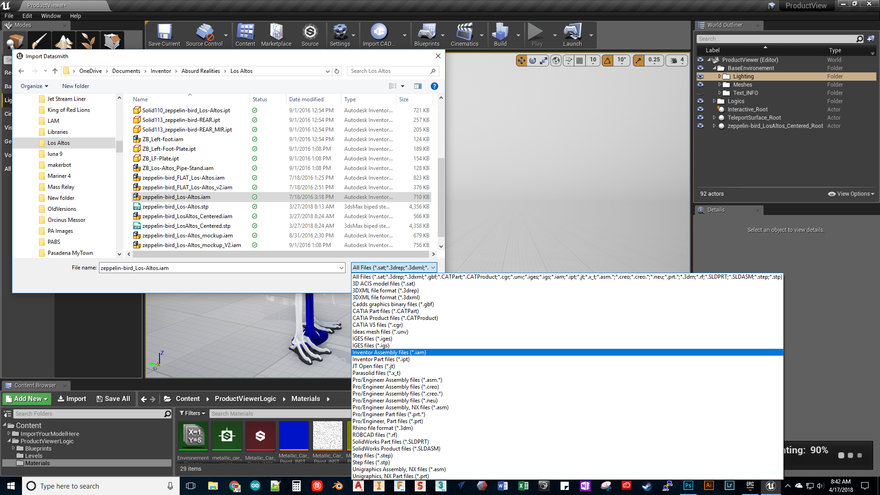 Many standard CAD file types can be imported into Unreal Studio

The exporter will capture pretty much everything in a 3DS Max scene including standard materials, lighting, and geometry and package it for easy import into Unreal. I tried the importers on some of my own Inventor models and assemblies and they worked well with only a few basic tweaks necessary for orienting the models correctly in a scene. The importer also automatically handled UV mapping of the now triangulated surfaces well enough to dive right into applying materials and shining lights on the models. 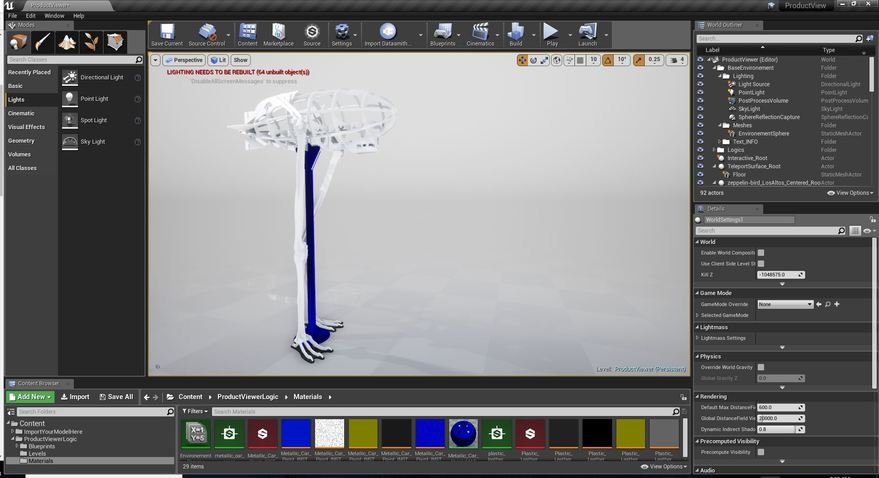 An imported model from a previous project

As a total novice in Unreal most of my test drive centered around the second cornerstone: new learning resources for Epic Enterprise. These consist of demonstration scene assets and online video tutorials available from Epic. This was helpful as an overview of the interface and also offered deep dives into specific capabilities and processes in Unreal Studio. Chris Murray, from Epic, said these new learning resources will expand in the coming months and will continue to offer designers basic through expert level information about all aspects of the Unreal Engine.

Through the learning resources I quickly became comfortable with the interface and dove into explorations of scene structures, materials and lighting. The demonstration assets served as good examples of the engine's capabilities and provided a solid structure on which to learn the software's basics. The interface is fully customizable and centered around a familiar viewport with game-like controls. At first I noticed a few of the nomenclature choices were unfamiliar. Like when I opened a demonstration project to find it blank and realized that I need to load a "level" in order to see any of my "actors" and manipulate any scene assets. The interface includes a separate, tabbed editor window that allows for a fast and responsive multi-monitor setup. The editor window is home to material editing, scripting, as well as UV and mesh tools. 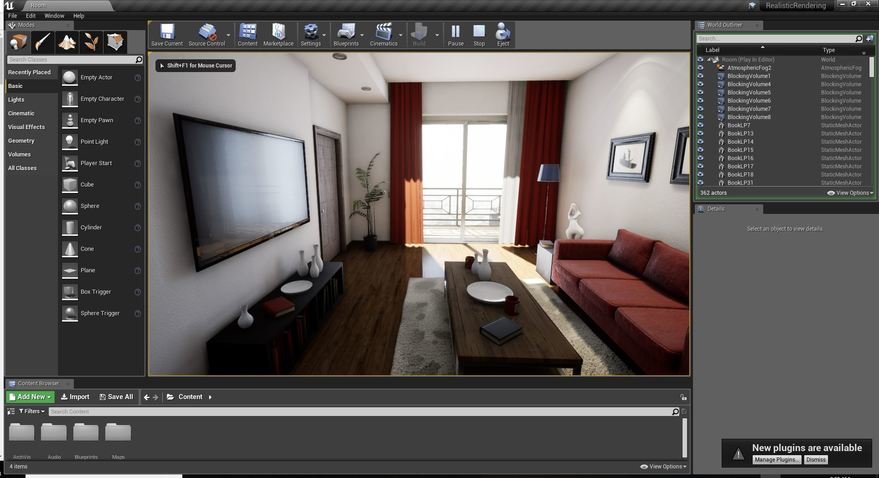 The material/shader system in Unreal is a familiar node-based visual scripting tool that makes understanding complex materials with many inputs and outputs fairly easy. While there are hundreds of different expressions and functions built in there are a handful of key expressions that do most of the work to control everything from color, metallic reflection, specular and roughness to normals and ambient occlusion. What is most remarkable about the system is how easy it is to convert nodes to parameters to create dynamic material instances allowing for fast on-the-fly material tweaking without recompiling. 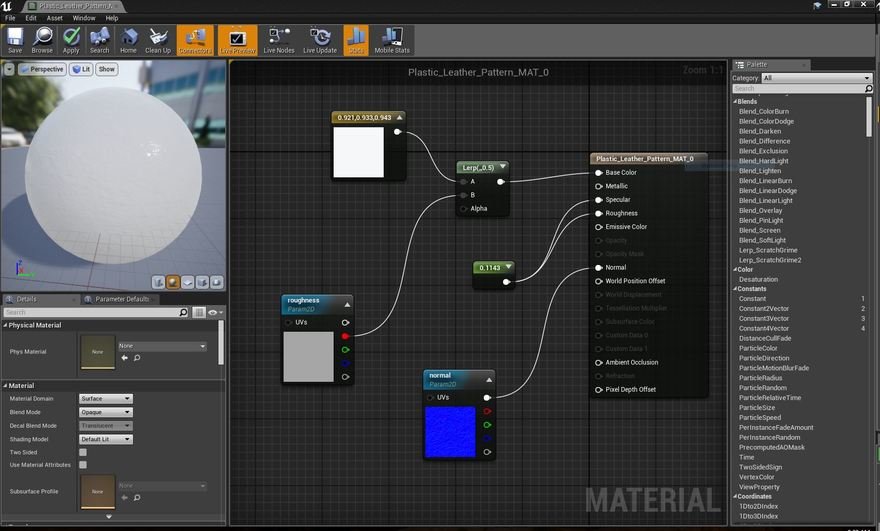 The material editor in Unreal Studio

Each of the demonstration projects I worked with showed off the visual quality of Unreal's real time rendering engine and some of the visual still felt game-like as opposed to photo-real. However, the ability to dynamically light scenes, change materials, move fluidly in a scene, and also visualize the scenes in VR offer a unique and compelling trade-off. This test drive with Unreal has not led me to think of real-time rendering as a replacement for traditional ray-traced rendering techniques but rather a new compliment to familiar visualization techniques. The price point supports this view: when the open beta ends in November the Studio will cost $50 per month to license. At that price it seems to me an enticing new tool to create immersive, interactive visualizations for my projects.

Overall Unreal Studio a solid value proposition to add to the visualization workflow. If you are curious about real time rendering or you've been thinking about applying VR to a project, now is an excellent time to test the waters with Unreal Studio.