Tools & Craft #93: The Argument for a Traditional Tail Vise

I built this workbench in the late 1980's. It serves me well and I have very few complaints. The design is basically the Frank Klausz bench that is detailed in Scott Landis' landmark The Workbench Book. The major changes I made were making it left-handed, and using a quick release vise as the front vise. 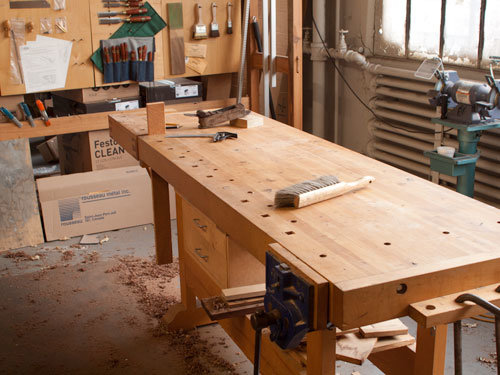 Most modern workbenches don't use a traditional tail vise, they usually use some version of a face vise just at the end of the workbench, or some sort of wagon vise. While these approaches allow you to clamp lots of long things and are reasonably versatile I don't think they are nearly as useful as a traditional "L" shaped shoulder or tail vise.

The main reason why a traditional tail vise is so darn useful is because of the unobstructed gap you get in the front of your bench. this gives you the perfect way to solidly clamp chair legs, or any long part that needs to be held while you work on it from one end. You also have space on both sides of the work for tools.

In my case the tail vise also has dog holes so I can easily clamp boards over seven feet long, longer than my bench, and have them supported all along the underside, except for a small gap. With a end mounted face vise you just don't get that kind of support. Wagon vises do give you that kind of support but without allowing you to extend the clamping length past the length of the bench.

Another use for a tail vise is something I saw recently and adopted immediately. Tage Frid, one of the early writers for Fine Woodworking would saw his blind dovetail tails by holding them diagonally in the tail vise. I tried this and it means I don't have to crouch and saw up, and I can see both the inside face and the end grain as I am sawing.

My tail vise was made completely out of wood, the mechanism isn't perfect - but it works well enough. In fact when it comes to real work I use it a lot more than my face vise. 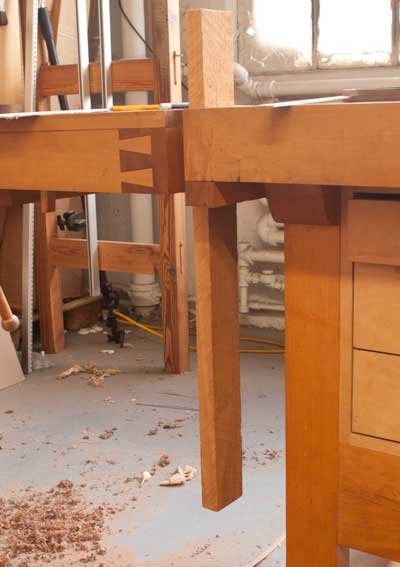 I have nothing against wagon vises and their descendants, I think they are a great retrofit to a bench, are very useful, easy to build, and just have the limitations I mentioned above.

I do have it in for the double screw vise mounted at the end of the bench. In my opinion it's definitely at the bottom of the heap of vises. I understand why a double screw vise can be handy on the face of the bench - for clamping boards for dovetails and things like that but even so any regular double screw vise is a little low for fine work. Additionally the light is wrong at the ends of a workbench for fine work. A Moxon Vise in any of its forms is far more useful and is at the right height. For regular clamping of long boards all a double screw vise at the end of the bench does it give you two threads that can bind and if a piece of wood or wide panel is not going to move around the bench with a single threaded vise, two threads don't add anything. As for gluing up big panels and things - well that's why bar clamps were invented. Gluing up in a vise is a shortcut I have been guilty of but for a wide panel bar clamps are a much better solution than an end mounted twin thread vise.

P.S. I apologize for the poor quality of the photos. They really should be from the other side of the bench and show me actually doing something useful.

Tools & Craft #93: The Argument for a Traditional Tail Vise