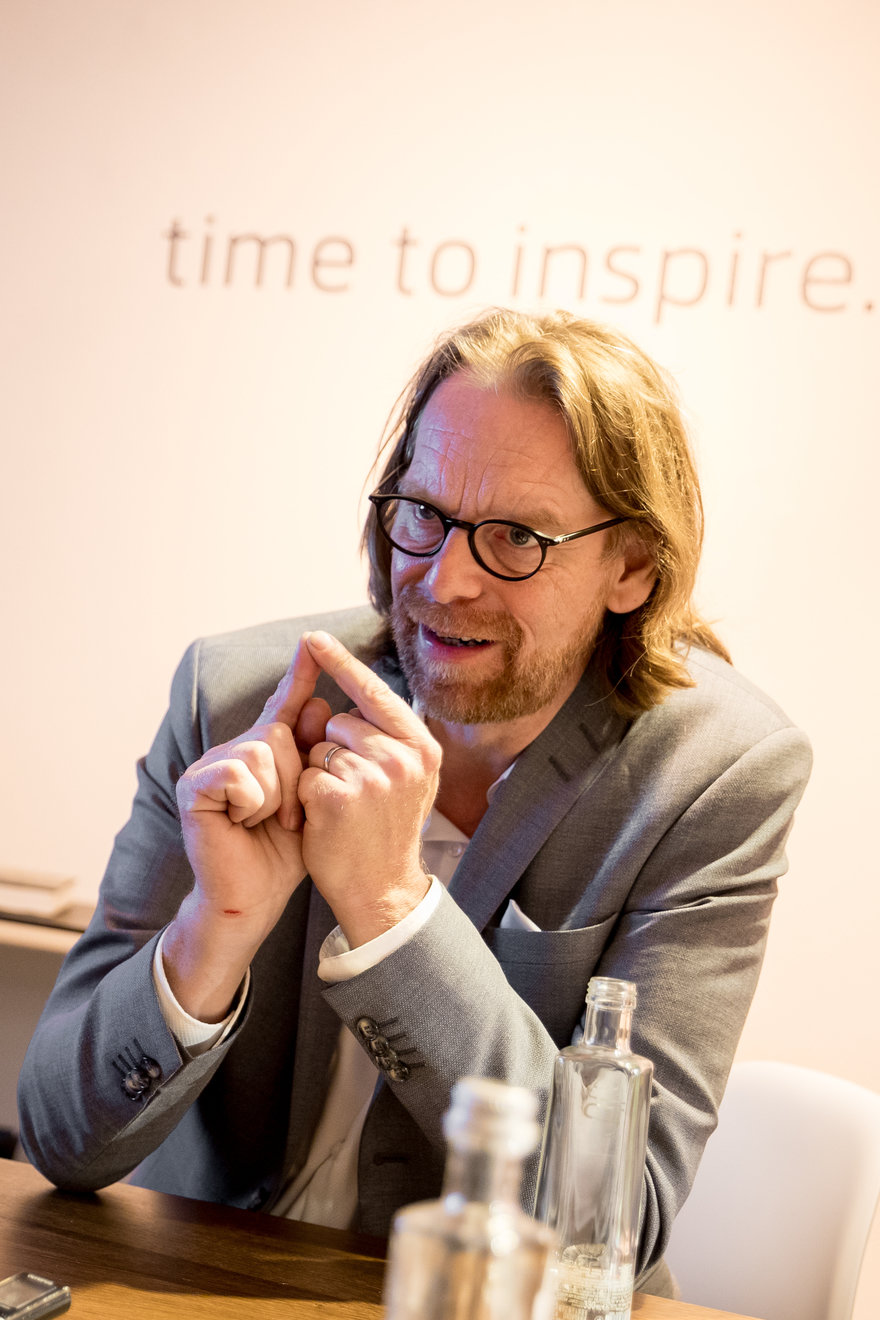 During last week's Milan Design Week festivities, China, Munich and California-based electric vehicle start-up BYTON unveiled their electric concept SUV in Europe for the first time at a quiet, tucked away location in the Brera Design District. The concept was previously unveiled at CES and a few other locations, but for the European unveiling, BYTON created an installation around the vehicle and put together a miniature design studio on the lower level of their venue.

The electric concept SUV features a large 49 x 9.8 inch display screen that self-adjusts its brightness according to changes in light, along with a human vehicle interaction system that utilizes voice recognition through Alexa Voice, touch control and Air Touch gesture control (yes, this means the car will respond to specific hand movements). After using face recognition to unlock your BYTON vehicle, the lack of a center console makes the space feel less like a car and more like a lounge. In terms of holding a charge, drivers are able to go around 323 miles on one single charge. During Milan Design Week, BYTON also unveiled the concept for their first brand store, which will open later this year in Shanghai. 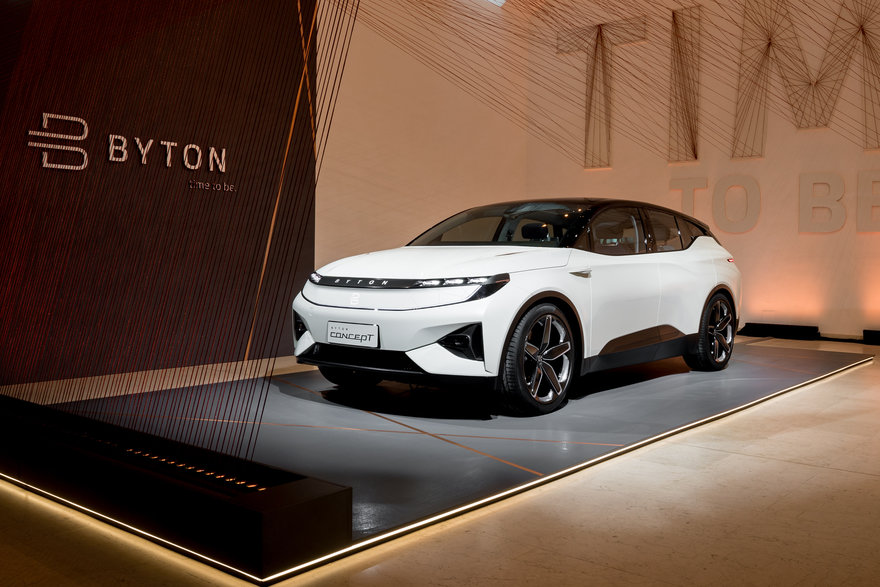 Amongst the list of industry veterans leading BYTON's team is VP of Design, Benoît Jacob, who is the former VP of Design at BMW. During his time at BMW, Jacob was the head of various projects, including both the i3 and i8 electric vehicles. Now, at BYTON, Jacob is responsible for building a concept vehicle from the ground up with the help of his design team. We were curious to learn more about the design process behind BYTON's electric concept SUV, so we had an in-depth conversation with the self-taught (crazy, right?) car designer to get the inside scoop:

Benoît Jacob: I must say that we really had the chance to have a standout design process where we were could truly focus on innovation. A good design process means you have to have time. With startups, you have a lot less time, so we decided to do the explorative, creative phase much quicker. We went wild and looked at many possible directions, but we came to our decision relatively soon in such a way that we were not compromising the whole development process because there's nothing you can compress in the development process. You can fly from Milan to Los Angeles in about nine hours, maybe eight hours if you go quick. What you cannot do is fly that distance in five hours. 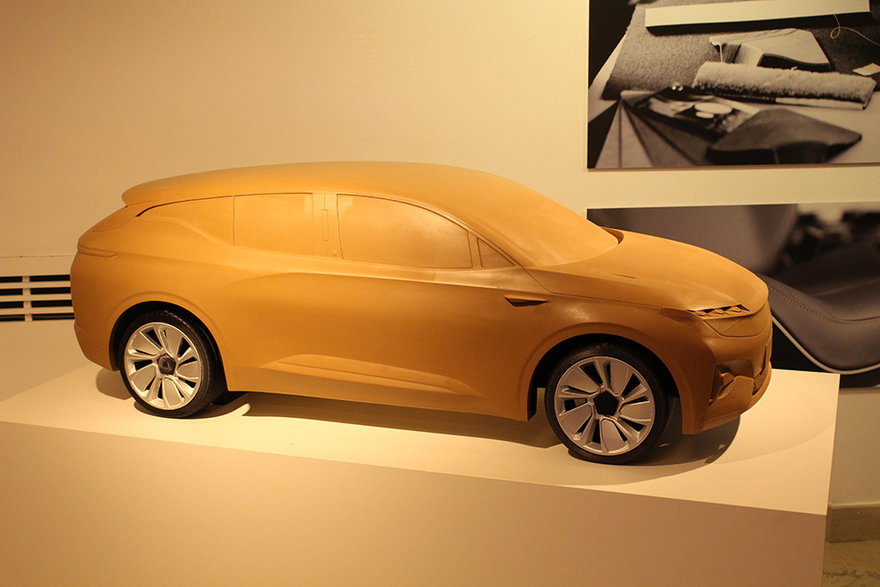 The way we run our design process starts with strategic research, context, benchmarking, and all these things, and then after we simply work digitally and physically on models. Our design center in Munich has all the tools and methods to conduct this. So we have the possibility to create clay models even from our studio, which is very rare for a start-up. Normally people will outsource, but from the beginning we set up the structure to do all of these things ourself.

"I think the ability to update software, functionality and things like that will be on a day-to-day basis. And this is, of course, something we have to integrate as a technology into the car."

We have a fairly big design team now of about 70-80 people. We are not only working on one show car. We also work on the production car, and we're already working on future development. This is a platform, so we need to make sure we have that next thing ready. We not only need designers to do all of this but also data managers, engineers and people programming the milling machines. We have about 15 different jobs, and I think around 15 different nationalities. It's a fantastically international team. 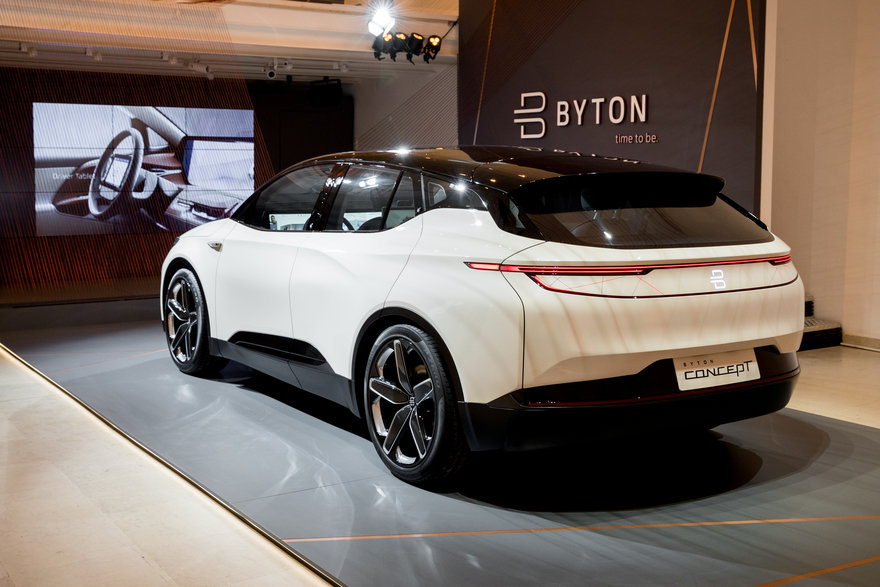 We have a very strong visualization team, and we work a lot with virtual reality. We invested quite a bit into VR tools. Visualization helps you see basically, on any day, exactly how the final car will look before it's ever built. We are now at a competency level where we can do highly realistic renderings, and in a way it helps with speed. If you have the highest possible level of objectivity while you develop your car, you are able to react quickly if something goes wrong. In the old process, you would work for months on the clay model, then get it finished, get it outside, look at it 200 meters away and say, "Oh shit! That part is not even," or something. A detail that you'd never see on the plate while you work on the car magically comes to light. Now, we do it differently. If something goes, wrong, I can see it basically the next day—even at an early stage.

We also have a global footprint. Our design center is based in Munich, but now we also have a design center in Shanghai because I want most of our ideas to be born in China. China is where our market is, and you have to get your ideation or your research where your market is. Then in Germany we have the advantage of bringing quality to this whole process.

Who would you say is BYTON's particular target market is at this time? 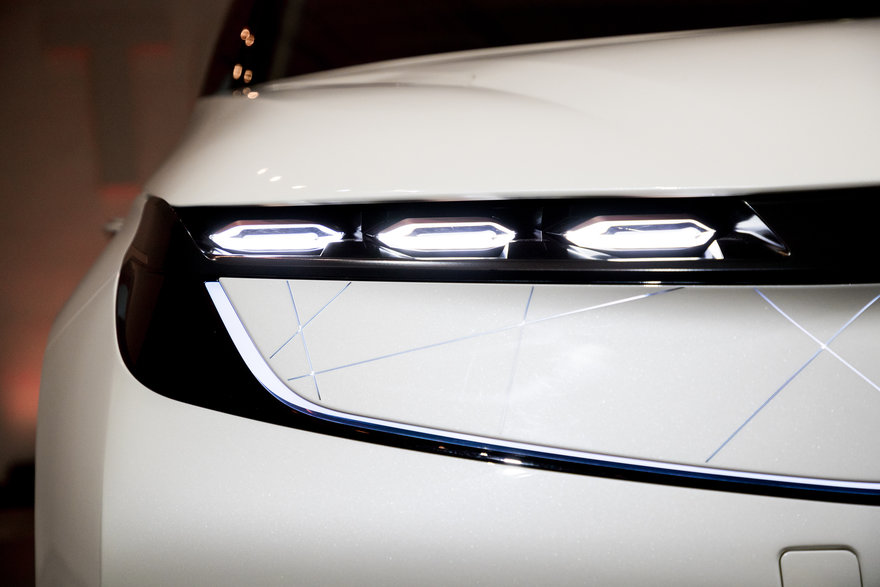 The people that we're looking at are a group that typically buys premium product—like the young, successful entrepreneur. I would not say millennials because they are probably a little bit too young, but definitely Gen-X.

You've worked on a few interesting engineering projects with this car, including a larger than usual display screen and motion sensor technology. I'm curious to learn about how those considerations played into your design process.

The car industry has gone through a transformation, and the main challenge for us designers is to combine cars with new digital product that has a very different lifecycle. On one side you have the car, which is still capital intensive and, of course, a huge investment. So, the car itself will still have more or less the lifecycle that we know today—you know, six, seven, eight years. But digital products have a totally different lifecycle.

"Typically car designers and engineers say they know everything right from the beginning. But from start of production until the end of cycle, I'm saying I probably don't know everything, and this is a good thing." 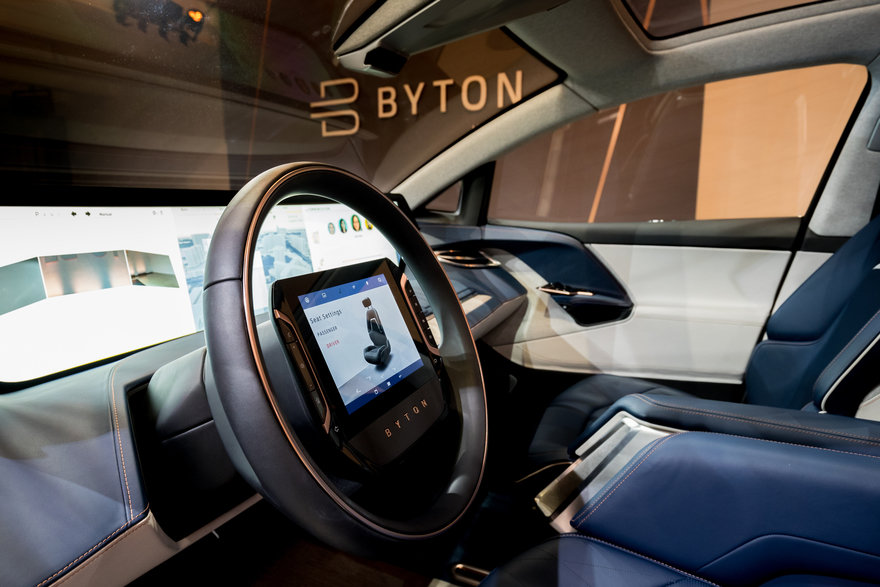 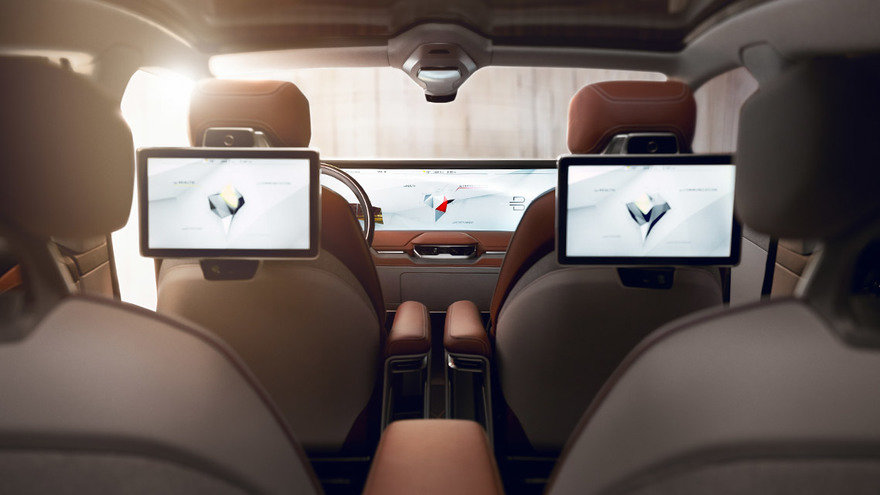 The interior features two large display screens in the back in addition to the main display. 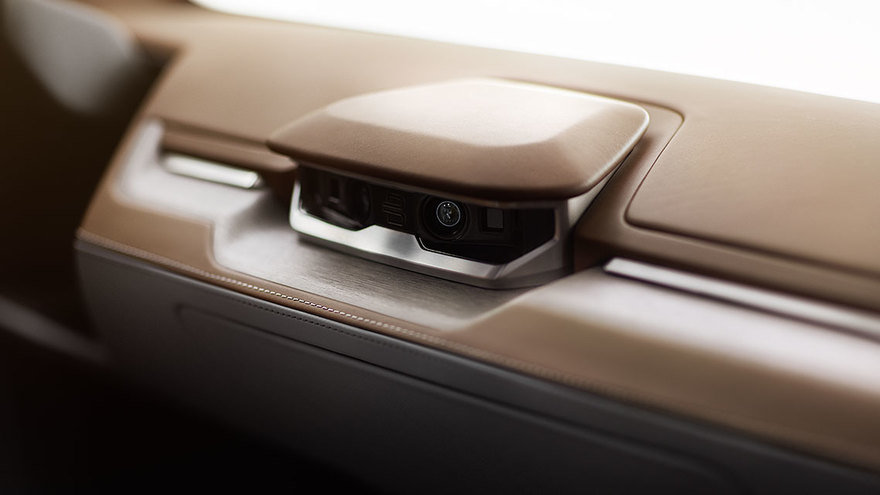 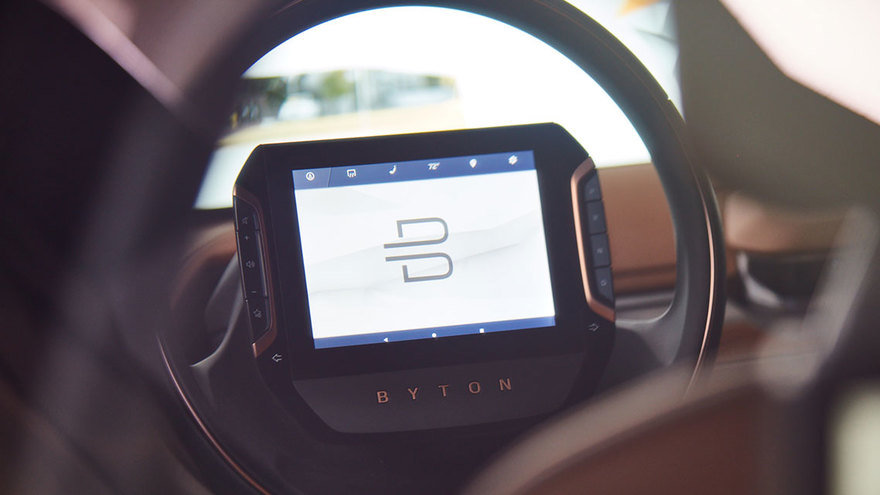 Figuring out how to update a car within the traditional lifecycle is a challenge. The way you update a car today is essentially based on the mid-lifecycle impulse—"Okay, lets go from new wheels, new bumpers and maybe new color," and you're done. I do not believe the future will be like that. I think the ability to update software, functionality, etc. will be on a day-to-day basis. And this is, of course, is something we have to integrate as a technology into the car. We need to consider the systems that receive this information, like for example antennae systems and modems, and we need to have a design or concept that accommodates them. We have this relatively large screen inside of the car, and it's not because we find it fancy. The idea behind the large screen is instead to say, "This is a canvas". We already know some of the use cases for the display now, but we're leaving room for the many use cases that we don't know at this point in time.

It's okay to say that we don't know everything. Typically car designers and engineers say they know everything right from the beginning. But from start of production until the end of cycle, I'm saying I probably don't know everything, and this is a good thing. This is a future-proof sort of attitude. So that is the idea, but of course integrating this technology was, from a design standpoint, a challenge for us. Learning these new skills and integrating a large thing like that is not an easy task. For example, safety standards and regulations can change at any time, and we're designing this car for a global market, so it has to fulfill different, various regulations worldwide at the same time. We've gotten to a point where we fulfill all of them to the highest possible standard.

I'm glad you touched on the unknown future of the car industry because my next question is: How, as a car designer, do you design something for the future and know that it's still going to be relevant when it finally comes to fruition? 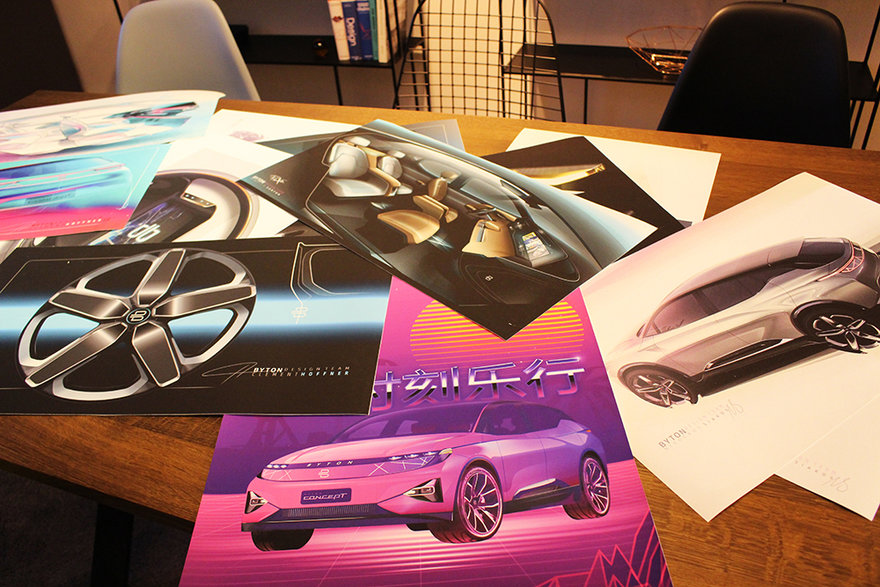 We are not trying to innovate for the sake of innovating, but instead we're trying to innovate where it really makes sense. I can give you this example: At the very beginning, our CEO Carsten Breitfeld asked me if I would consider a specific special door concept. Funny enough, when a CEO gives the head of design permission to do fancy doors or something like that, I would say most of the time, the designer automatically says yes. But I actually told Carsten that this concept wasn't necessary or relevant. We'd rather invest our energy, time and money into something that is more relevant or meaningful as an innovation rather than there just being a story about getting in and out of the car.

It's interesting how alien some concept cars look and feel, especially in a time where design needs to be accessible and approachable. They're almost futuristic to a point where people can't quite relate yet.

You have to have a balanced approach towards innovation, and that's what I really try to instill as the spirit of BYTON as a brand. Yes, there is a strive for innovation and things that we will only do to compete with our competitors, but you can combine those elements with very bulletproof solutions. You don't have to reinvent the wheel, especially when it hasn't been proven that some of these new ideas are much better than the ones they're supposed to replace.

BYTON's concept vehicle will be available in China towards the end of 2019 and in the US and Europe in 2020 with a price starting at $45,000. Learn more about BYTON's electric concept SUV here.