Emoji has become almost like a second language to us, but where did it come from? 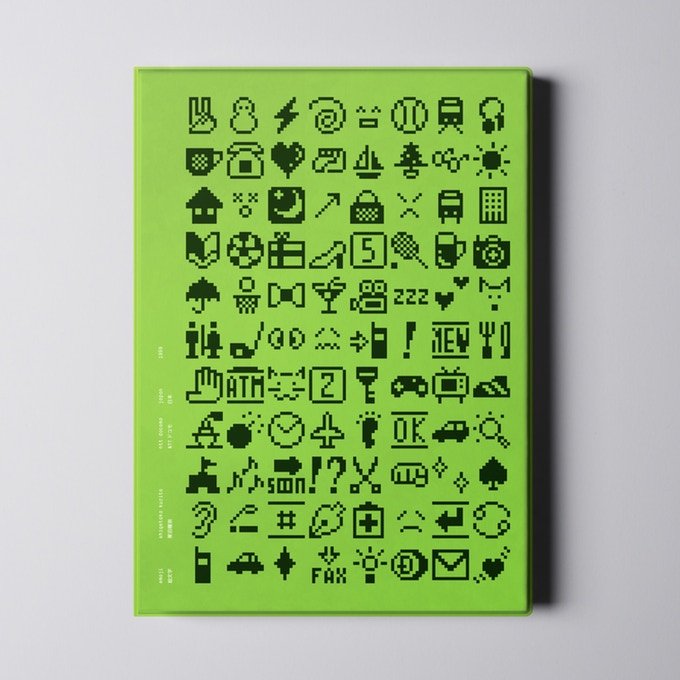 At its core, Emoji is a supplement language designed to accompany our own languages to give the appearance of human emotion during digital conversations. Weird, right? When MoMA announced that they had acquired the original set of emojis from Japan, people were confused for understandable reasons. Its often difficult for people operating outside of the design world to think of graphic systems we use on a daily basis as design. Are emojis design? Where did they come from? Why are they here? What have they become? With their new book, Emoji, Standards Manual aims to explore those valid questions through graphic design and extensive research.

What we find particularly fascinating about this book is that learning about the history of Emoji is nothing like reading about hieroglyphics or other image-based languages from thousands of years ago. Emoji is more like studying our own personal language behavior, which is difficult to do objectively. To learn more about the peculiar topic of emojis and why they chose to address it from a design standpoint, we sat down for a chat with Hamish Smyth and Jesse Reed of Standards Manual:

Hamish Smyth: In the 90's, Japan was very much ahead in terms of mobile phone technology. Mobile phone were invented in the United States, but they really leap-frogged in Japan, and they had a really sophisticated network in the 90's. They had data transfer before anyone else really had a reliable system for that, which means they had a primitive mobile email system on phones in the 90's. They also had beepers at this point, but their beepers included this thing that DOCOMO, the AT&T of Japan, called i-mode. i-mode was this primitive email and data transfer system, and one of the features of i-mode was that you could, on your beeper, write a little message and then press a button and put a little pixelated heart on the end of a message. Essentially it was an emoji heart, but you could only do a heart, just one thing.

People really liked it, but then for some reason, they updated i-mode, I think around '98, and they took the heart away. Apparently people hated that. They were like, "bring back the heart! We love it." And so they said, "okay, give us a second." They went away, they figured out how to bring the heart back, but they also designed a whole suite of these little graphics. And that's what the first emoji set was—it was this set of 176 little graphics that you could attach to phone messages or emails using DOCOMO phones. They were designed by Shigetaka Kurita. 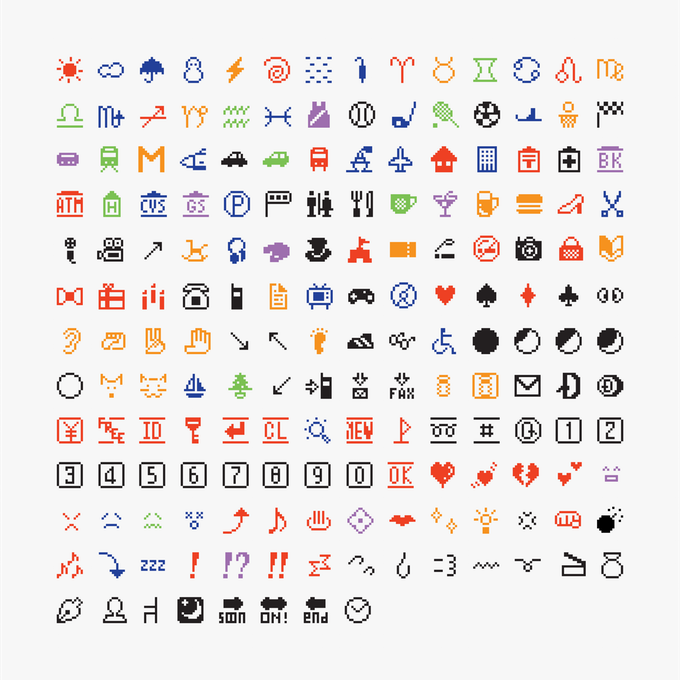 DOCOMO was ahead of everyone else with this, so it was a great marketing tool for them. It eventually became so popular that all of the other phone carriers adopted the same system in Japan. Everyone in Japan was using emoji since '99, 2000 and the early-2000's, but we didn't have anything like that in the West until Apple and Google adopted the Unicode standards for emoji in 2011. I think they were working on it from around 2009-2010, but 2011 is when it was released. Of course, by then, screen technology was way, way better, so the emojis were different-looking. But they used the same principles as the original ones, and the original ones are the ancestors of the ones we have today. If you sent a heart back in 1999, that's the same heart that we use today.

Jesse Reed: Emoji was invented to enhance the complexity of digital communication. When you're not face-to-face this is the replacement of us looking each other in the eye. It adds an extra layer. If you text someone "Thanks", and there's no exclamation mark or period, it's either "Thanks!" or "Thanks." Are you being sarcastic? Give me a little bit more emotion.

What made you decide to compile this information into a book?

Jesse: We know the emojis in our phones very well. They're all silly, but the history of them hasn't been told at great length yet. As with most things, it appeared and people think it came out of thin air. We're trying to tell the story of why they were created, where they came from and who designed them a little bit more. 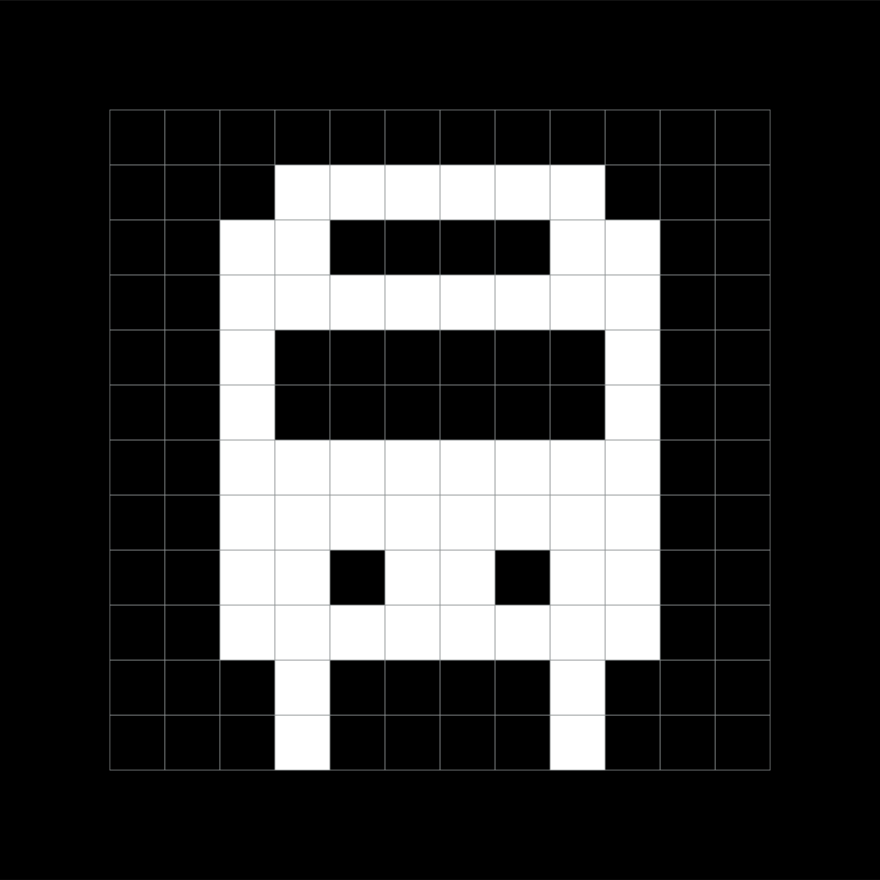 What are some interesting, unexpected design details within the emoji system?

Jesse: One interesting thing is that nothing can be centered. The grid is symmetrical, but that means there can't be this middle stem in any of the images. So everything ends up being somewhat asymmetric because you can't center anything within the grid. We learned little things like that from interviewing Shigetaka and talking about his process.

In graphic design these days, the underlying grid is a feature that people add to logos and identities, but a lot of the time it's just bullshit. The do it after the fact and are like, "look at the structure that we created." But with emoji, it was truly an architecture that had to be followed no matter what. You couldn't cut corners. You couldn't add anything. You couldn't even make diagonally cut pixels. You had to make these recognizable images appear out of a 12x12 pixel grid. It's the right way to use an angular end grid, and it's important for people to see that process.

Each individual emoji has so much information behind it. How did you decide to put all of this information together in your book?

Jesse: Most of the book is one spread per emoji. Every spread has an enlarged emoji with the grid kind of overlapping it and then a one-to-one scale in the very top on the left-hand page. Then on the top of the righthand page is all of the technical data like the unit code, the hex color, the number it was assigned and everything like that. It's interesting seeing them so blown up because they become abstract when they're small, so when you see them at full size they become more clear.

"Various things influenced emoji. One was the pictogram. Pictograms are used as signs in many places in Japan like stations and public places. The second was the Japanese art of Manga, which uses graphics to express emotion. Lastly, it was Japanese magazines. All of these things that organize and communicate information came together to influence the creation of emoji." —Shigetaka Kurita, designer of emoji

This exercise in distilling a complex object down to a form like this is really hard. Shigetaka doesn't even consider himself a designer. He's not a trained graphic designer, in fact, her's a game designer now. But this is such a graphic design challenge—it's not a normal thing that we deal with. Even when designing a corporate identity, the goal is to have some sort of complex form and distill it down to the bare essentials of productive design. I don't think people equate emoji with that practice because what we see now are really like photographs.

You ended up taking a research trip to Japan for this project. What were your main objectives while on this trip?

Jesse: There were many reasons why it was important to go there, obviously to meet Shigetaka and the team at DOCOMO, but you'll see in the video that we shot a lot of B-roll of Japanese life because all of the emojis are based on Japanese culture. The initial set were just everyday objects that people encountered in Japanese life that aren't necessarily the same in the US or in Europe or anywhere else in the world. It's very interesting to see their environment and what they pulled from. One example is that the emoji for mail is the logo of the mail service in Japan. It doesn't look like a mailbox, it's just a logo that's a Japanese character that only they would equate with mail. If you saw it you would have no idea. 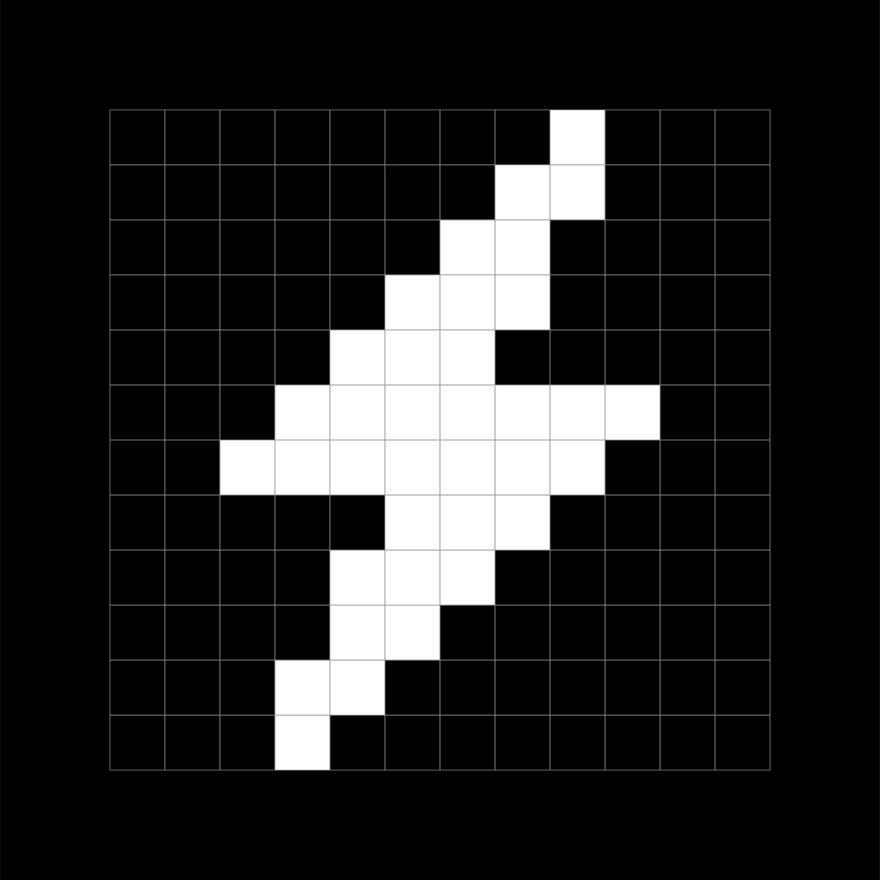 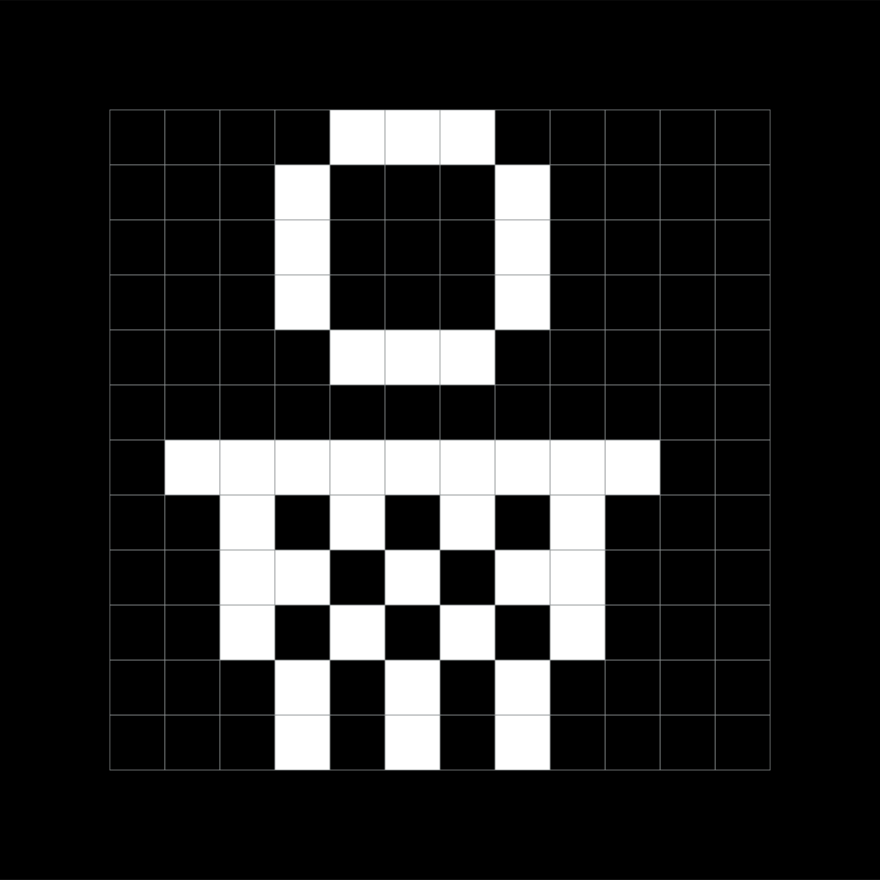 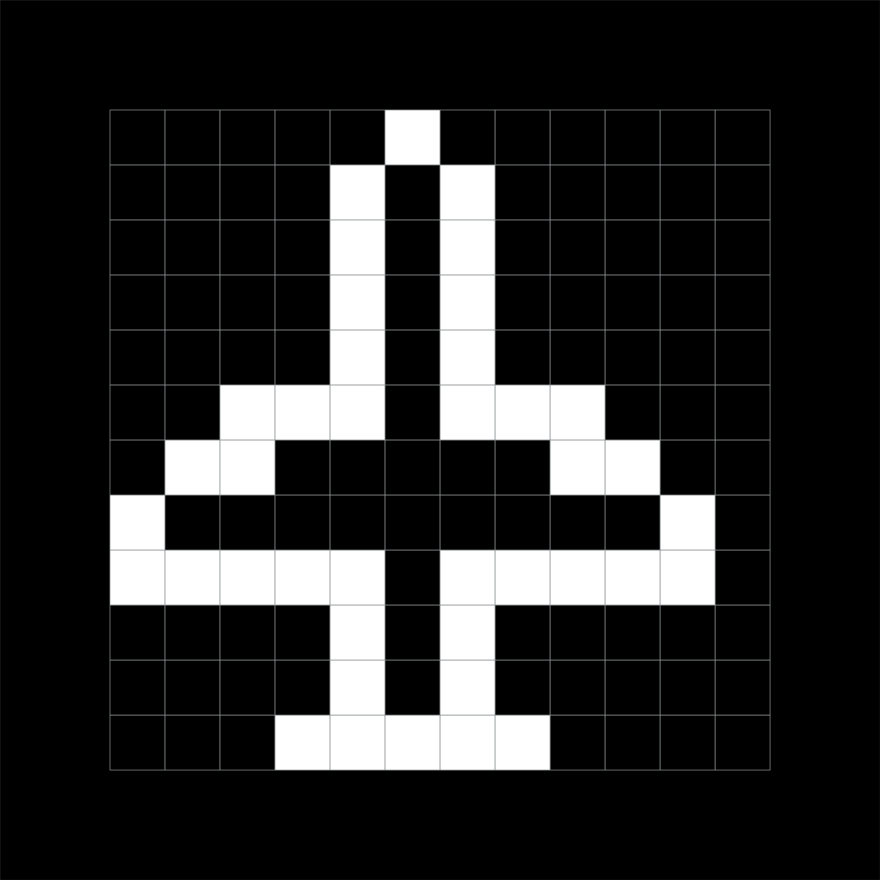 Can you talk about the book's unique cover design?

Jesse: Oh yeah, It's awesome. A black print of the emoji is on a board below this bright green vinyl so you can see the graphics through the vinyl. The different layers and the way the book lights up from the green vinyl is supposed to look like an old flip phone screen.

The cover graphics are a crop of the full set of original emoji sketches. Shigetaka scanned this particular page and gave it to us. Not all of them ended up being made. We didn't even know the sketches existed, but when we interviewed him, I think we just asked, "do you have any sketches?" and he was like, "Oh yeah, I have this sheet that I did all my ideas on" And then he just photocopied it for us. I don't even think MoMA had it on display or included it anywhere. He acted very nonchalant about it. He's very humble, and when we interviewed him he talked about how no one at DOCOMO ever intended this to be a global phenomenon. It was just a very one step at a time transition from i-mode.

There's also a keyboard component to this project. Can you explain what that will be like?

Jesse: It's going to be a keyboard extension with the original set of emojis so that you can use them on your own phone, more or less like stickers. That was kind of the impetus of the project. They wanted to make a keyboard extension in the States, and we got involved and said, "that's cool, but we don't really do that. We make books. Could you get us some original sketches?" So they did, and now we're doing the whole package deal. The keyboard will be included for free during the Kickstarter campaign, and then it will be sold afterwards.

What do you think the principal of emoji and the system's history says about each respective culture?

Jesse: Emoji is highly organized information that is just so thoughtful, and it has to be. From the selection of objects to the way that they're designed to the way that they were deployed is kind of just like Japanese culture. That type of organization is normal. Looking at the Apple emojis, they're so complicated and overdecorated, which probably says something about our culture.

Hamish: In the mid-2000's, Japan moved on from emoji even before the West had adopted it. They had stickers, and they invented all these way more complex ways to express emotion. We're so far behind.