Let the below image sink in for a moment: 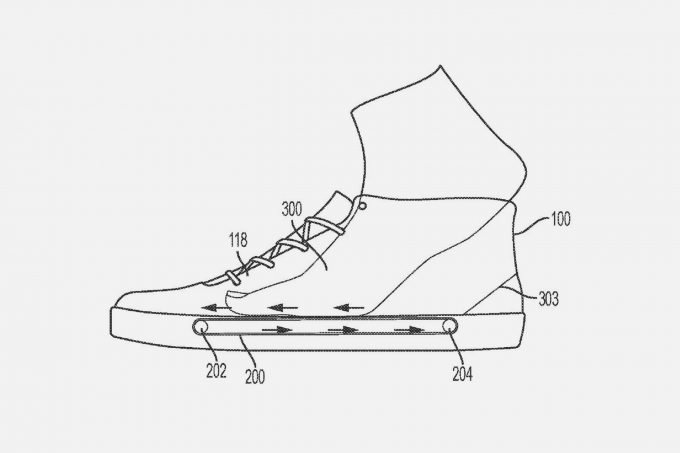 Yes, what you're looking at is a miniature treadmill inside of a sneaker, and yes, this is a real patent that Nike recently filed. Looks like when a bunch of employees left Nike because of that sexual harassment scandal all of them were replaced by Steven M. Johnson.

In any event, the "rotatable conveyor element" inside of the sole is not meant to help burn extra calories like some type of mechanical version of the disastrous Sketchers Shape-Ups. Instead, think of the mechanism as an electronic shoe horn that eases your foot in and out of the shoe with no effort.

The only information released from the patent so far is that the proposed shoes would feature “an upper configured to form a space between the upper and the insole," the mechanism's general goal would be to, "admit and secure a foot of a wearer,” and the conveyer belt in particular would be “configured to rotatably engage a body part of the wearer as the foot enters the space and draw the foot into the space.” It would be highly uncomfortable to walk around on a metal hunk all day, so I'm curious to see what kind of materials Nike would select or develop for this. In the image, it looks almost like there could be a layer of material between the foot and device, which is promising but still very unclear.

How do you turn the treadmill on and off, you're wondering? The shoes would be,"coupled to an activation mechanism, such as a switch or mechanism to detect the presence of a foot." I envision this component as a button carefully placed on the exterior of the shoe so that the user's foot couldn't accidentally activate it while in motion. Perhaps something on the tongue along the lines of a sleeker Reebok InstaPump Fury button?

The idea is intriguing, and I could see this being useful for people with limited dexterity who have trouble getting their shoes on and off themselves. Even people who have trouble sliding their Nike SF Air Force 1s on in the morning could benefit from this.

Whether Nike will bring these to life or not is up in the air, but I will say this: we never figured Nike's adaptive lacing technology would hit the real market at some point, so it's likely that whatever this is won't stay locked away as a patent forever. On that note, imagine a sneaker that incorporates both adaptive lacing and this conveyor belt technology, and it gets real scary real quick.