Mass-coordinating clothes in lieu of flashcards

Video footage featuring a "human LCD"--South Korean schoolchildren using tri-colored jackets(one color on the front, one on the back, one inside) in the manner of flashcards, to produce patterns and images. (The moment that occurs around 2:58 on the counter is pretty eye-opening.)

The technique is borrowed from North Korea's annual Mass Games, a challenging-to-coordinate Communist spectacle of synchronicity. North Korea's version features a stadium-sized image--they modestly refer to it as "the Largest Picture in the World"--which is in fact comprised of schoolchildren turning pages of a massive flashcard tome, coordinated by a conductor. In comparison to the South's version, the North Korean version is fairly "hi-res" (photo below). 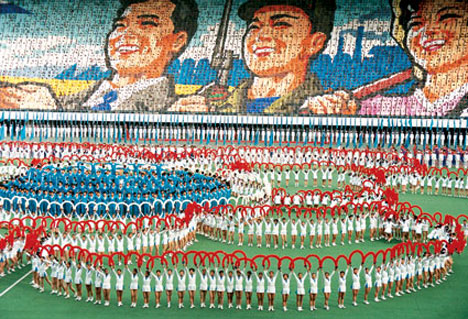 via live leak and theme magazine

Mass-coordinating clothes in lieu of flashcards