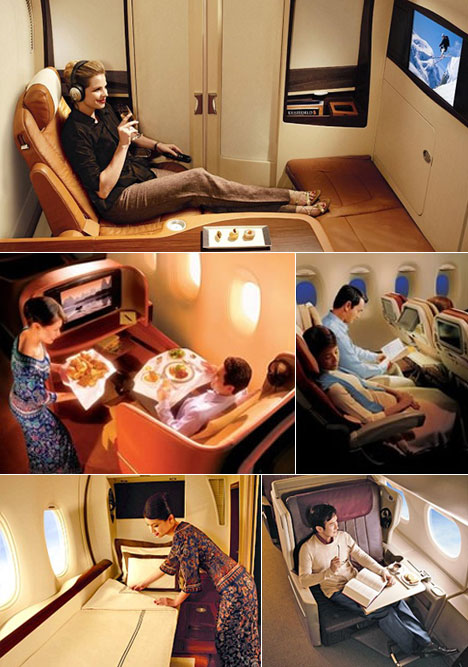 Yesterday Singapore Airlines finally took delivery of the first production-line Airbus A380, unveiling some surprises; Singapore Airlines had been so secretive about the plane's interior design that many SA employees hadn't even seen it. So here's what the big bird's got:

- 12 "Suites" heralded as "beyond first class" with seats nearly one meter wide and actual separate beds, none of this folding nonsense. Duvet and cushions designed by Givenchy. Couples traveling together have an option for double beds. 23-inch LCD.

- 60 Business Class seats, 34" wide, with "privacy shells" and height-adjustable dining tables. 15.4-inch LCD, USB ports, in-seat power. Alas, if the poor BC traveler wants to sleep, they'll have to do it in their seat, which folds into a bed (also featuring Givenchy bedding).

- 399 Economy Class seats with 10.6-inch LCD, USB port and in-seat power. EC flyers will sleep the old-fashioned way, i.e. Greyhound-style, and back here your only connection to Givenchy will be reading about them in the in-flight magazine.

Features we thought the plane was going to have, but which didn't actually make it in:

As we've mentioned in previous posts, this plane is enormous. For scale, check out this photo, where a blogger over at SinGeo used Google Earth to overlay the plane on Singapore's National Stadium: 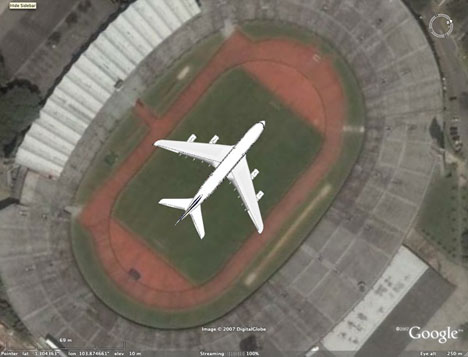 This thing is so large, we believe smaller aircraft can land on top of it when they want to take a break.

SA's first commercial A380 flight takes off in 9 days, headed for Australia. For more plane specs, click the link below.