In the picture I am boring a pretty big hole. Pulling the handle of the brace towards or against me is pretty easy, but rotating the handle from left to right when the handle is far way from me is a different story. With my arm outstretched, moving from left to right, I have no leverage, and very little strength. On a small hole this isn't a big deal, but I struggle with larger diameters. 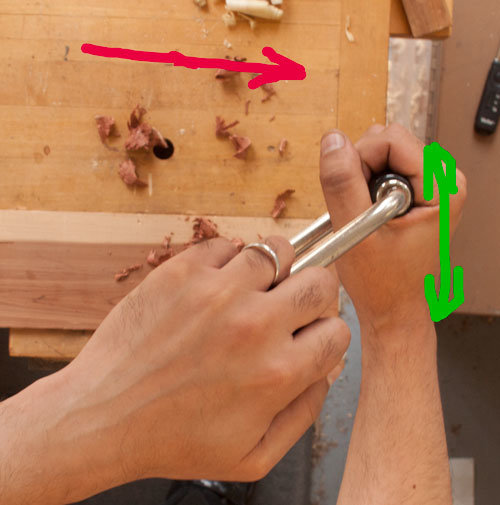 The solution, with a common American ratcheting brace, is to use the ratchet. Instead of trying to move the handle in complete circles and having no power for the left to right parts of the stroke, I just ratchet the brace forward and back, on the part of the stroke where I have the most arm strength.

In this manner, drilling a big wide hole becomes pretty darn easy and quick. I think this is one reason why American style ratcheting braces became, in the late 19th century, so popular worldwide and drove the English ultimatum brace out of production before World War One.

In the picture the green lines show the back and forth part of the powerful part of the stroke where I am ratcheting away, and the red line shows where you have very, very little arm strength by comparison.