Hone in on your design sketching skills at the second edition of SQ1CON happening this July 13-14 in Chicago!

Advanced Design Sketching (ADS) is getting ready to host their second SQ1CON in Chicago this July 13 and 14 after a successful inaugural event last year. What began as industrial designer Hector Silva's pipe dream in grad school, ADS has now evolved into a multifaceted non-profit that puts on sketching conferences and workshops and offers a free video library on YouTube, Facebook, Instagram, featuring sketching videos from some of the most notable industrial designers of our time. 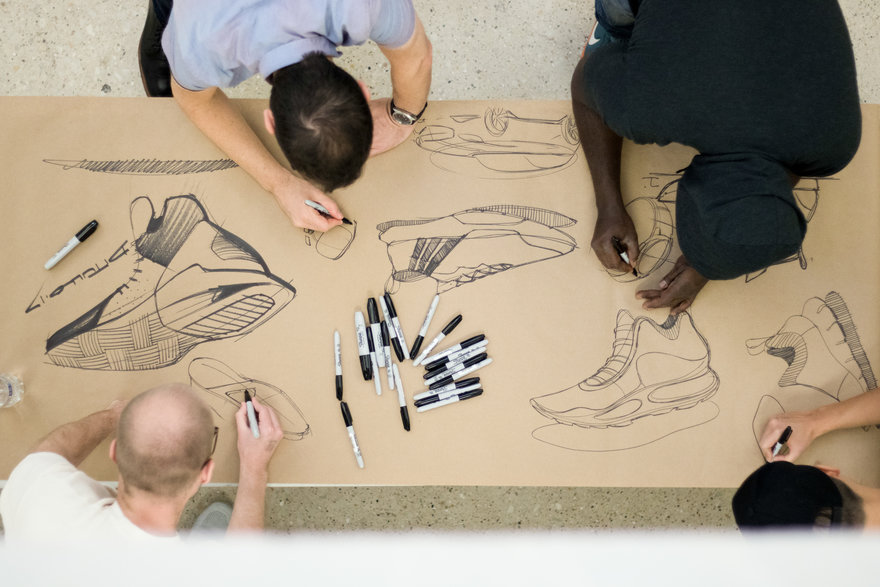 At its core, ADS is a small team of passionate and talented ID'ers, hand-selected by Silva, that makes bigger and bolder moves each year—like the Avengers of student design, which is a fitting reference, considering Silva's initial idea was inspired by Jony Ive's badass ID team over at Apple. However, ADS isn't focused on designing tangible products, they're focused on exactly what their name lends—making sure ID students understand the fundamentals of design sketching and have the opportunity to hone in on their skills before entering the real world.

We sat down with Silva to learn more about how he started Advanced Design Sketching, the struggles and triumphs along the way and what's still in store for the evolving platform:

Core77: What drove you to put on the first workshop?

Hector Silva: A lot of my first and second year students wanted to continue building their skillsets over the summer. Around 20 or 30 students came to me and asked if I knew of any in-person or online workshops they could take. I didn't. That's when I realized there was enough demand and that it would benefit the school.  It was pro bono, and the students did not get credit—it was more about commitment. The students promised me that they would show up, and in return, I would show up and teach them everything that I could. If I couldn't teach them something, I would then connect them with the best. 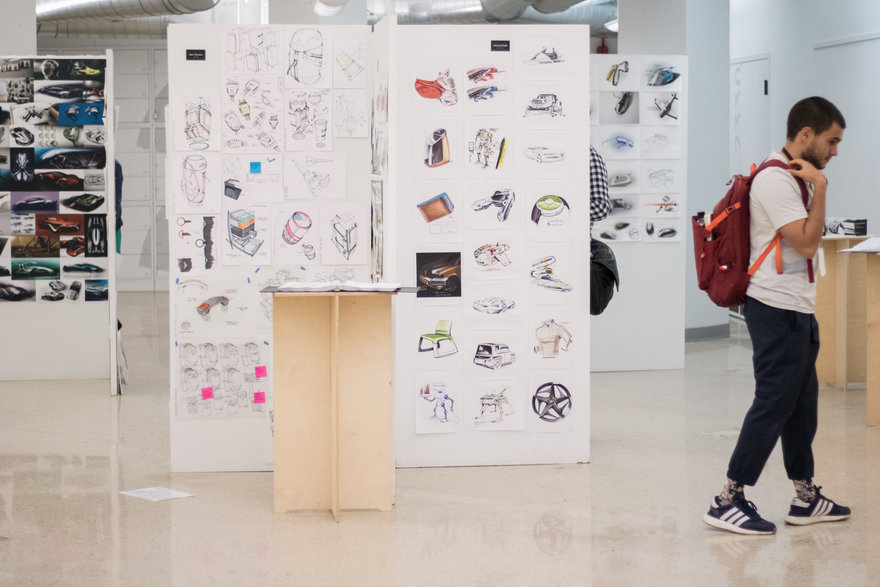 The first summer workshop happened in 2016, and about 15 students showed up. We met once a week for about 7 hours at the university's Student Innovation Center. When you take your foundation year, the sketching classes are called "Design Sketching" or "Design Drawing", and this class was an advanced version of that, which is probably how the name Advanced Design Sketching came to be.

What was the result of that first workshop? 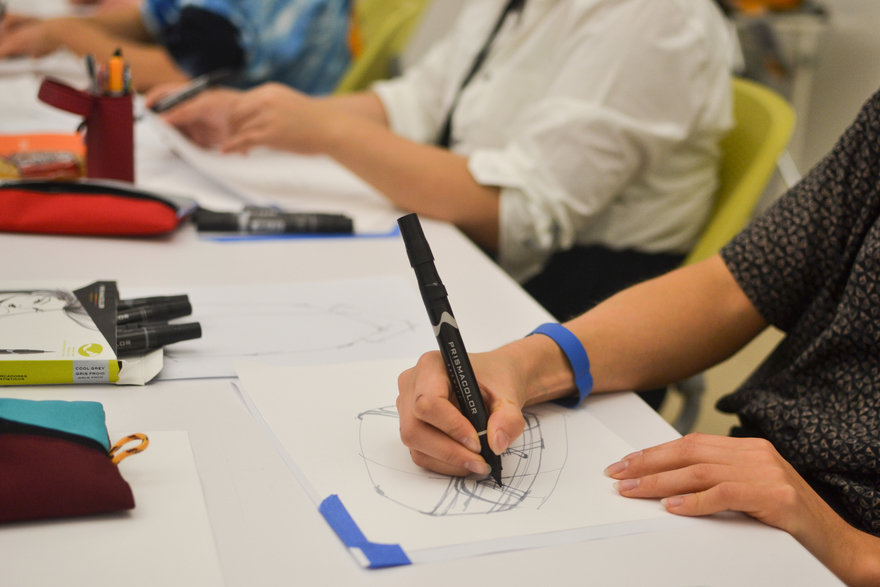 The students absolutely tripled their skill set over summer. They went back to school, and at the same time, I started to reach out to my network of industrial designers around the country and ask if they could put together a video of what design sketching meant to them and how they use it—either on an individual or personal level or at work. It was a very good opportunity for them to stroke their ego and to self promote. 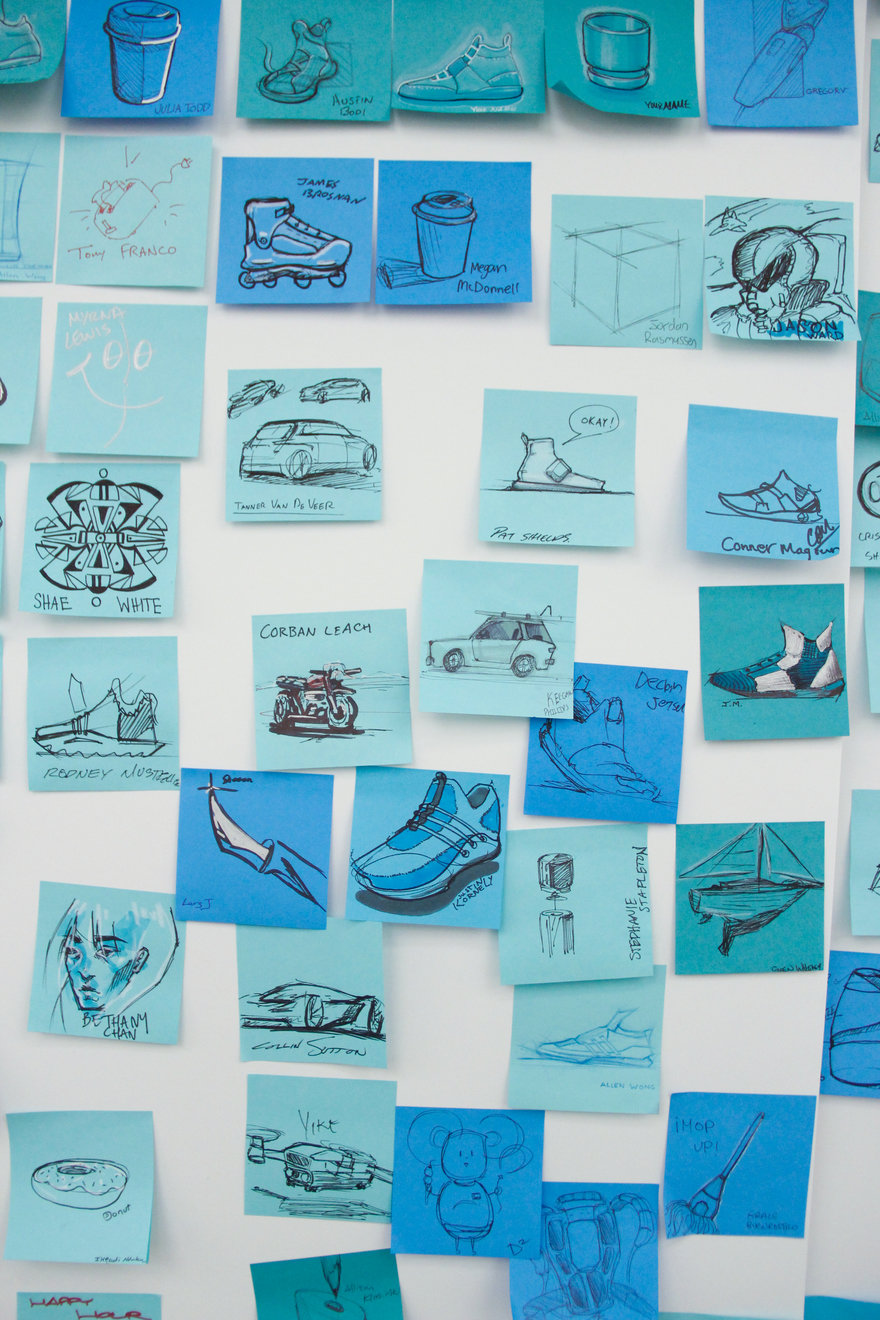 I initially asked ten people, but it blew up, and all of a sudden I was asking about 400 people. The videos spanned out to footwear design, toy design, furniture design and even architecture because I think students should be exposed to all kinds of thinkers and designers. I started hitting up everyone from students doing amazing things to the big dogs, the CEOs, the managers. I wanted everyone to see how different people use design sketching at different levels of their profession.

I started putting the videos on Facebook and Instagram, and my team and I started to offer free events where we would invite local hotshot designers with a pretty big influence on Instagram to Chicago for a workshop. We started to draw about two to three hundred people coming to these events. We put on about 4 or 5 workshops in the spring of 2017, and at that point, we began recruiting more people because we had so much work that we wanted to do. Our team is currently 12 people and 3 advisors—Nicholas Baker who was just featured on Core77, Spencer Nugent of Sketch-A-Day and the Coreskills series, and Jeff Smith of AutoDesk. They make suggestions and advise us on next steps. They've done amazing things for us. 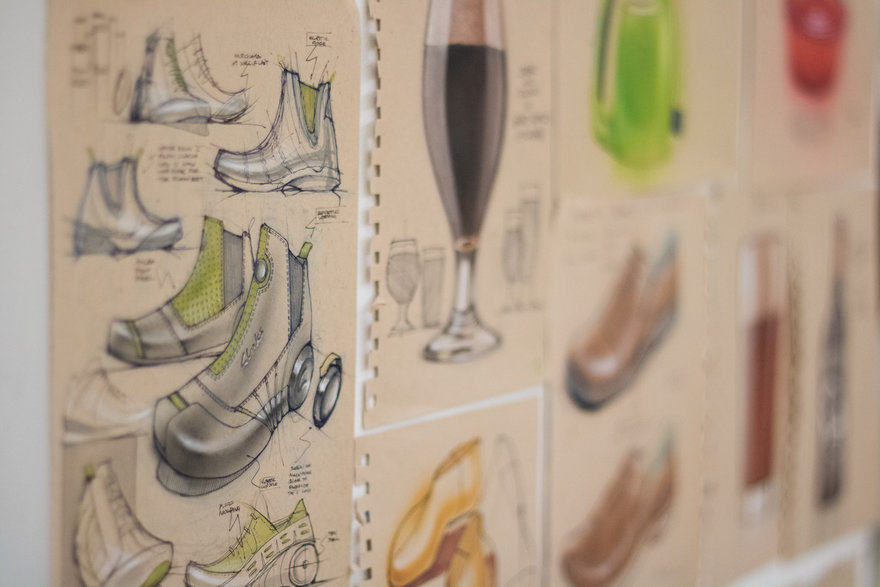 What brought about the idea to start the SQ1CON conference?

At the time we had a one-of-a-kind video library and workshops once a month, but long term we needed to figure out what we could do that would really validate us and put us on the map. That's when we decided to put together a conference where the most influential designers that are really hot right now on Instagram would come together in one space. We were so hyped. We started putting the conference together, and we coined it SQ1CON as in if you fail, you go back to square 1 and start again. Our keynote happened at Motorola's amazing headquarters, and it was by Michael DiTullo, who is another big Core77 contributor. Michael DiTullo is awesome because he is all about helping and giving back. 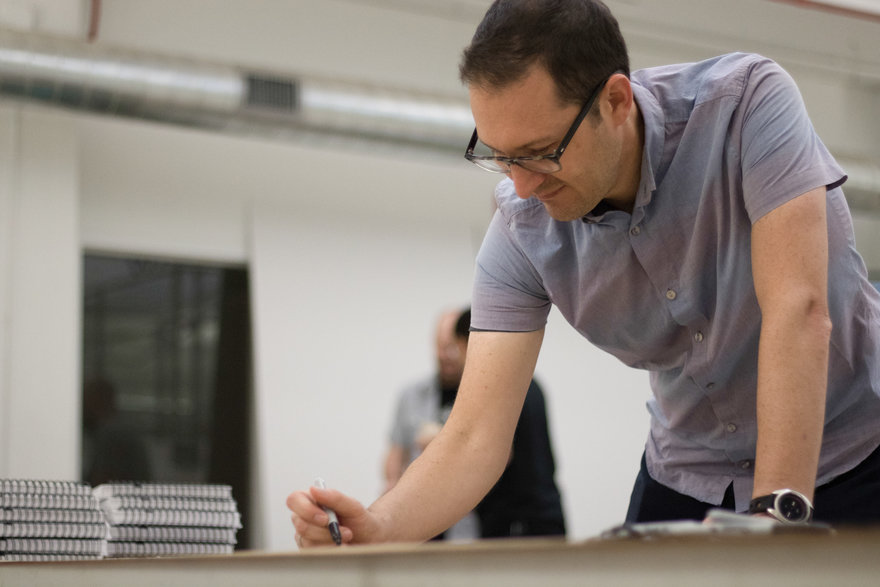 Did you run into any challenges along the way?

Yeah, the craziest part is no matter how much you prepare for something, you're never prepared. We had no idea what we were getting ourselves into. In order for us to really be valid, we needed to be nonprofit. I had no idea of any of the business logistics but had a very good friend who helped me apply for nonprofit status. That made me confident that anyone who would collaborate with us or give us money would know that we were authentic. AutoDesk became our really big investor for the first conference—it was AutoDesk presents SQ1CON. We held the first conference at the University of Illinois in Chicago because the layout of the design theater is awesome. Since I was on faculty there and because all of the students are from the university, they let us borrow the venue. We were very thankful for that. 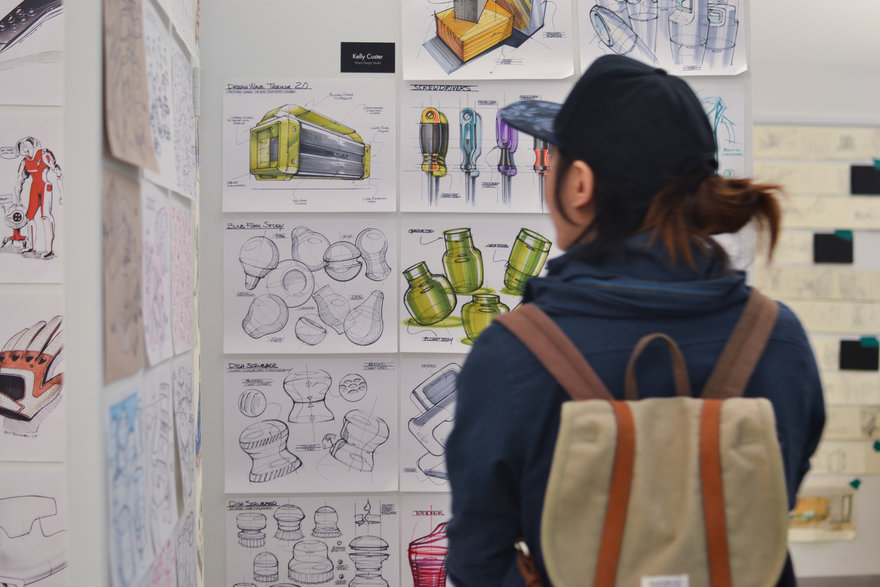 We anticipated a few hundred people because we counted every seat available, but I don't know what happened. On the day of, we had 600 people registered for the conference. We didn't know if we should be pissed off or if we should be happy that 600 people somehow were able to register. I wonder if Eventbrite broke. We only had enough resources for 200 people, including food, giveaways and door prizes, but in the end it all worked out. Everyone was super happy and was like "Wow! I can't wait until the next one." And we're just like "Shit."

And now you're gearing up for the second edition of SQ1CON.

Yeah, this past January, we started to meet to get ready for this year's SQ1CON. This year's conference is going to happen in July at the IIT, Illinois Institute of Design, which is the downtown loop area of Chicago. We invited a couple of repeat designers, but we also want to give the platform to other designers who are doing great things. This year's keynote will be the Creative Session Brothers.

Are there any major changes besides the venue?

My team right now is not only diverse in gender, but also diverse in race and ethnicity. That is very important to me because I want a team where people come from all walks of life and different backgrounds so that we can then have a conversation and discuss, even argue about ideas. One major thing that we want to change is that at our first conference we only had about three women designers speak. 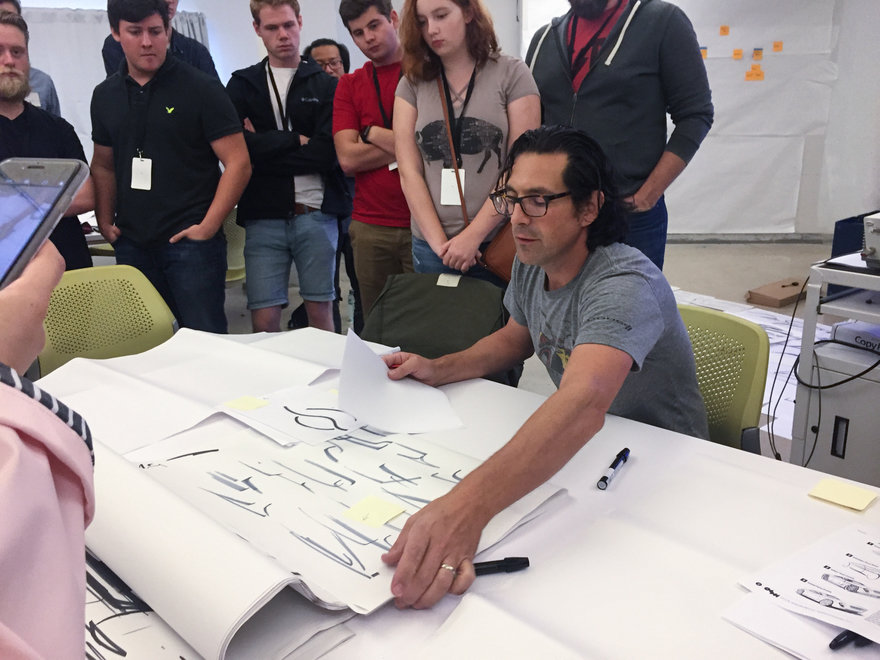 It was really hard for us to find women designers. We asked around. We asked for references. I think we had eight speakers, and we wanted half to be male and half to be female. The math did not add up like that, and we were disappointed. Every year, we need to get better at this and evolve and give everyone a voice. This year, the number doubled. It's still not half, but half is our goal. We are a team of diverse people, and we want that to reflect on everything we do.

It sounds like if you keep getting your name out there, more and more people will come forward. 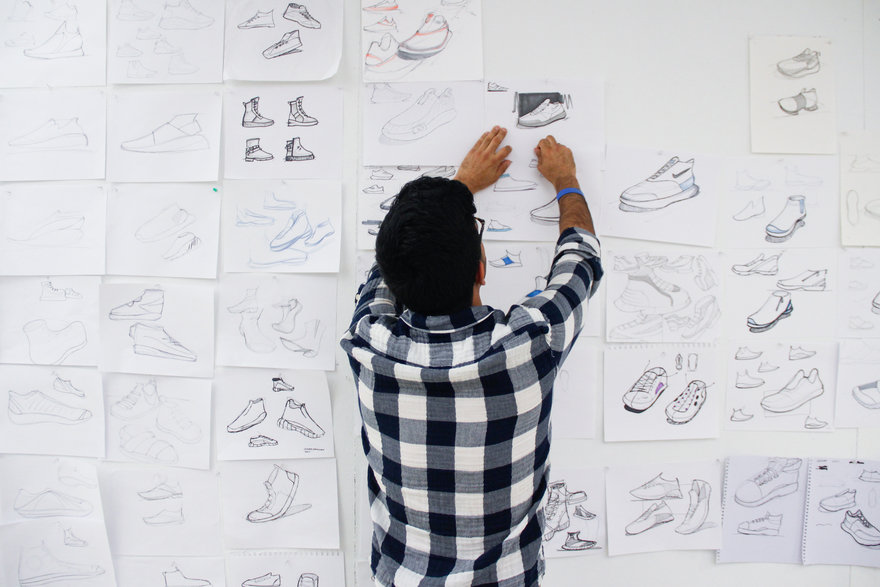 Absolutely. Last year's conference was very niche. It was all design sketching. This year's theme is about how sketching can be a catalyst in other parts of the design process and how it should always be evolving through your work, whether it's research or CAD or prototypes. Some people use it analog, some people use iPad on the Wacom or even VR sketching. We're gonna open things up so that we're able to reach as many people as we can.

What's next for Advanced Design Sketching?

We're going to start offering scholarships to undergraduate and graduate students, and we're also going to start doing a podcast. And all of our content will remain free.

Secure your ticket to SQ1CON before they're gone.