It was a wildly diverse, but consistent program for the opening sessions of the Connecting 07 Conferenece. Hans Rosling started things off with a presentation on Gapminder, a tool that's been around for awhile but never ceases to amaze. Arguing that data visualization and the designer should be in hand-in-glove relations, he spent some good time arguing that phenomena like global income gaps--and indeed the whole idea of a "Western World" as distinct from a "Third World" are, in his words, "bullshit." The best parts of his presentation were seeing him up on a ladder with a huge telescoping pointer (Al Gore on cherry picker-style), articulating his argument with some good old-fashioned show business, but the content was there, and you can check it out yourself at the site. Sure, he's clearly given this presentation about a million times, but it's no worse for wear.

Next up was Richard Seymour, famed designer/founder of Seymour Powell, who spoke, ostensibly, on Space Tourism. It was a fascinating leap from the first presentation of the day--so we were in for a literal and figurative conference ride. (Nice juxtaposition, programmers.) Seymour's presentation, in fact, was essentially about design optimism, tracing through comic books and some movie footage how we used to think about space exploration (from a design perspective), and how we're now loosing what he talked about as the "delight and thrill of things." "Designers cannot be pessimistic, it doesn't go with the job," he asserted, and gave a nice lift to the start of the day. The Virgin Galactic video was a nice piece of design pron, but that's okay: For $200,000 a shot, you'd expect something special.

Finally, Martin Eberhard + Barney Hatt took to the stage to talk about the Tesla electric roadster, with Eberhard taking on the hard stuff and Hatt following with the styling. It was a nice one-two punch, and one got the feeling that the audience was loving every second of it. Learn all about it, if you haven't already, at Teslamotors.com. 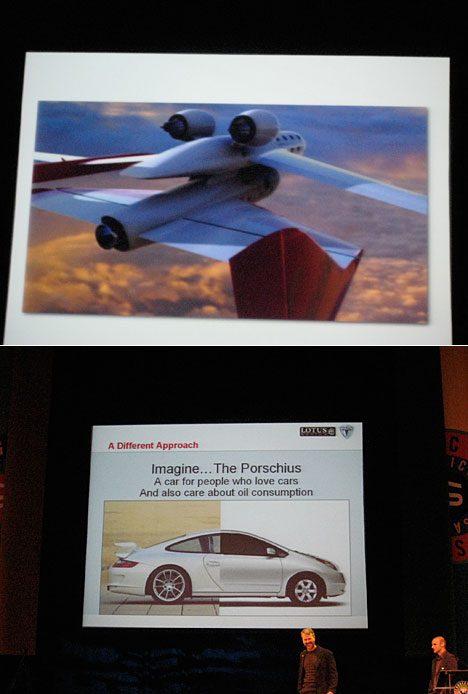