When we think of rust, the first thing that comes to mind is "old," as the natural process is an indicator of age for most products and even modes of transportation like motorcycles and boats. Through his experimental materials project Rust Harvest, designer Yuma Kano aims to transform our notion or rust to something more positive. He created a process called Rust Harvest, in which the first step is naturally creating rust on metal sheets by exposing them to light, rain, earth and seawater. Next, Kano developed a method to separate the rust from the metal plates by pouring acrylic over them. From there he uses the completed acrylic panels to create various types of furniture. The insanely satisfying video below runs through the rust harvesting process in detail:

The idea behind Rust Harvest began when Kano moved to a studio inside a shipyard located near Tokyo in 2014. He began wondering what materials he could use around the shipyard to incorporate the inspiration of his location into his work.  Eventually, Kano discovered the abundance of rust in the area, as the shipyard was located in close proximity to the ocean. Two years later in 2016, Kano began his first experiment with rust, leading to Rust Harvest. To give us a better understanding of the process, Kano handed us a sheet with translated answers to commonly asked questions. Below is the whole Q&A: 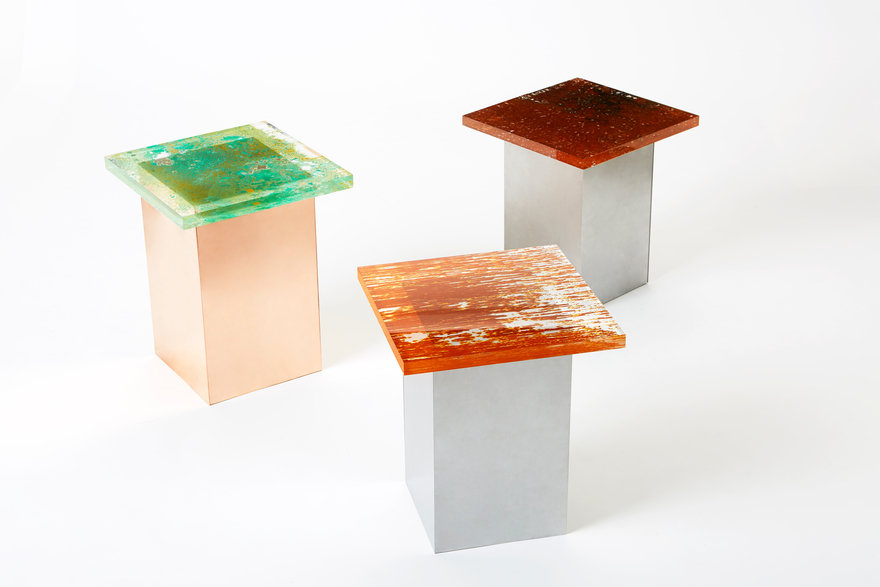 How is rust produced / How do you create rust?

The metal rust plates are produced by myself from scratch. Rather than using chemicals, I prefer to use elements from natural resources, such as sea water, rain, air, sunlight, soil, etc. As a result, I carefully and accurately add rust to metal, much like an artist painting on canvas. Of course, rust is a natural phenomenon, which makes it difficult to control fine details, but though the repetition and improvement of experiments, I am now able to adjust the color tints, for example, brown to orange. 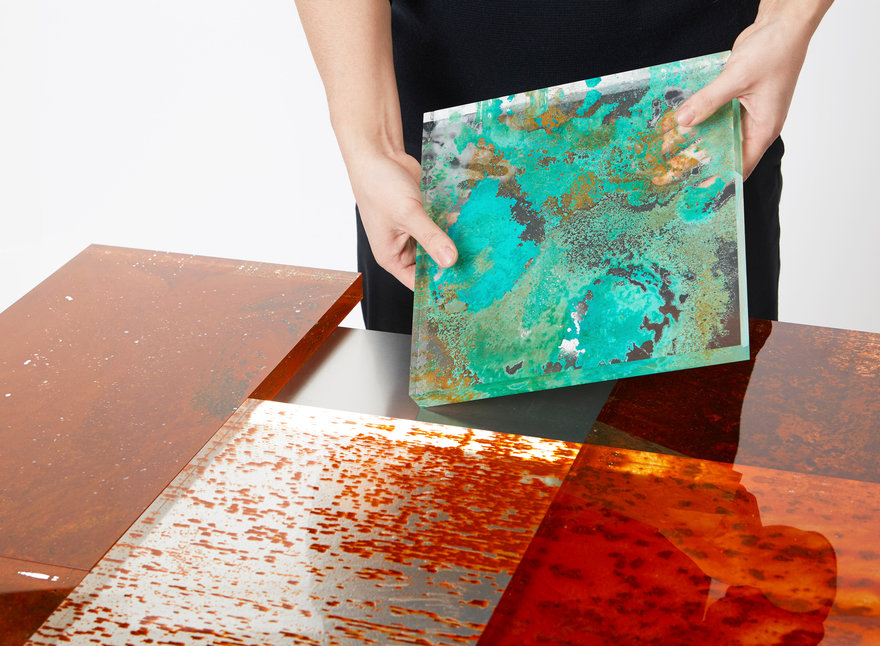 How do you rust acrylic?

Instead of rusting acrylic directly, I used an innovative method to transfer only the rusted surface from the metal plates using adhesive resins.

Why don't you use chemicals to rust?

The various rust patterns that appear due to natural conditions such as the seasons of rusting, weather, time of day, etc. are far more provoking than using chemicals that forcibly rust metal without taking enough time and consideration, making the pattern and color become uniform and uninspiring. In addition, more complicated and beautiful rust patterns or colors will appear by coincidence and unexpected various conditions overlapping, I aimed to artificially produce a natural rust by changing such conditions to create my own patterns.

What happens to the metal plate after removing the rust? 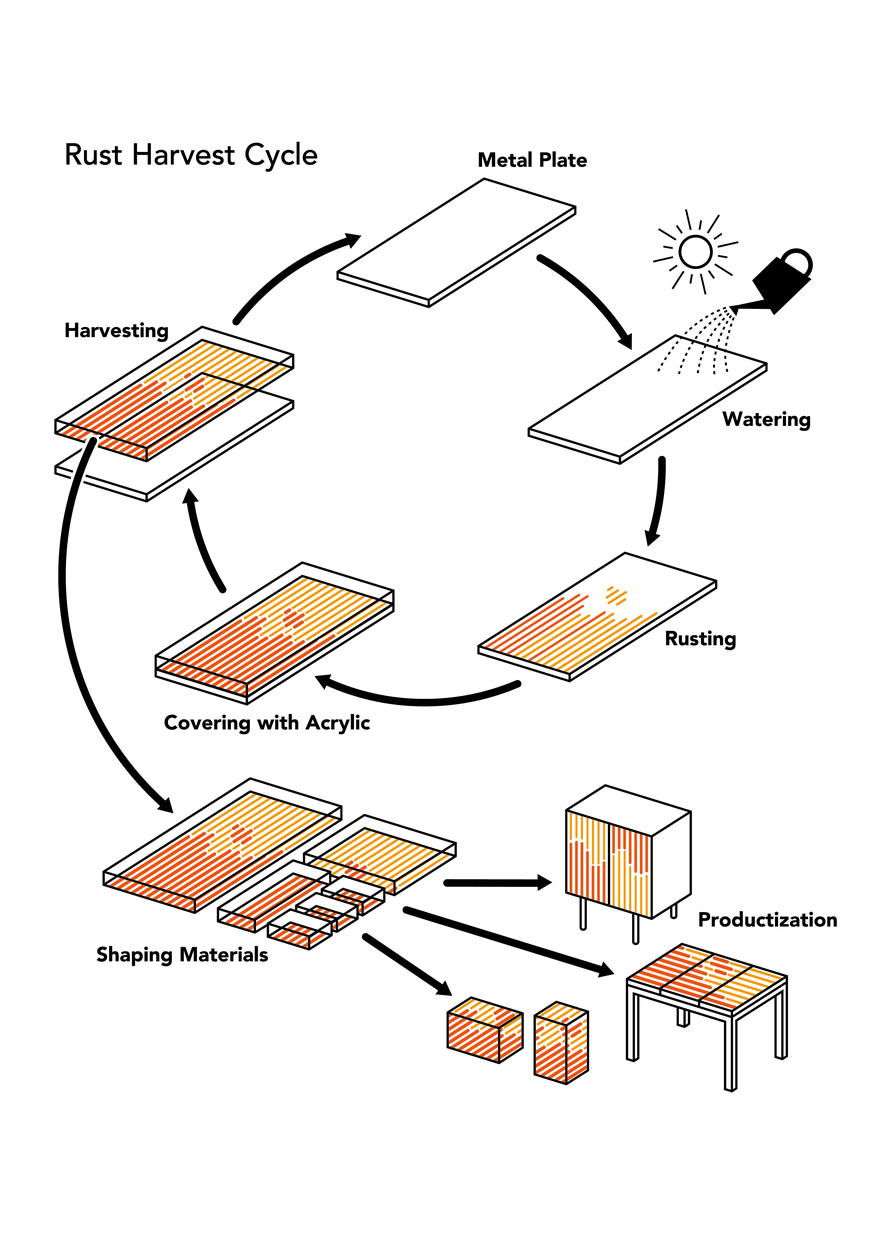 Although the surface will not be as smooth and clean as before, it will be re-usable once all the rust surface has been removed. After removing the rust, the metal plate can be either recycled or reused to rust again and create a new rust surface. I have defined this series of cycles and concepts as "Rust Harvest", as if raising and harvesting crops.

Why is the rust transparent when transferred on acrylic?

I discovered this phenomenon after a certain failure during my experiments. It is obvious that rust will only occur on rusting materials. The rust on a metal surface will not transmit light, simply because metal is not transparent. On the other hand, acrylic is transparent, therefore when the rust is transferred onto an acrylic surface, light will be transmitted all the way through. Because of this, you will notice that the rust is formed by many layers, and you will be able to see the bottom surface of it, where it was otherwise hidden by the metal surface. 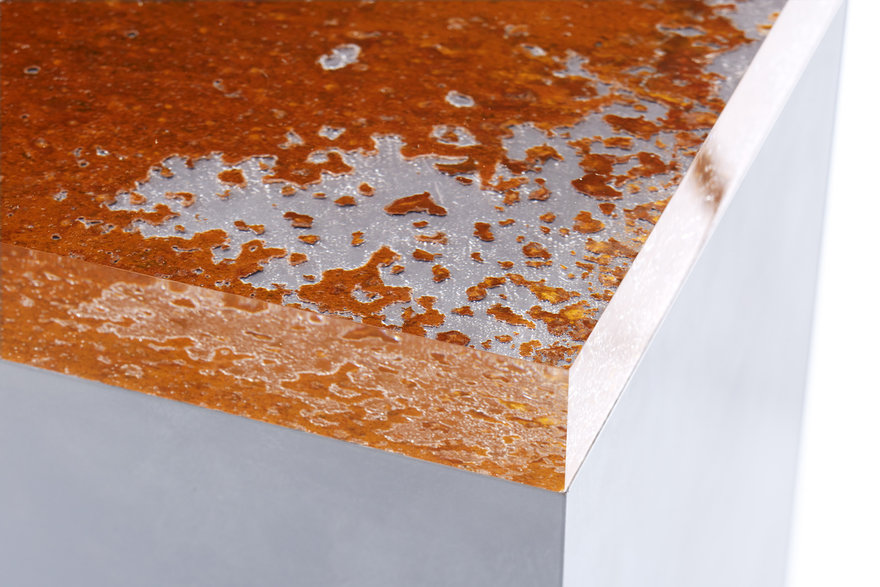 Does the rust on acrylic continue to develop?

The answer is no. Normally, rust progresses with the passage of time, but since the rust surface is adhered to acrylic, it will never be exposed to air to allow further rusting. In other words, it is in a state where the "time" of rust is captured inside the acrylic.

What is the purpose of using metal as part of your work?

I decided to make a principle of using metal as a part of my work. By doing this, you can see the difference in color between the rust and original metal, and it makes the texture more compelling. Moreover, using a pure metallic material for the parts will allow for rusting to occur with dirt and moisture. I expressed the change of time by combining the acrylic plates (in a state with "no rusting time") and the metal parts (in a state with "gradually rusting time") in a single piece of work. Decades later, the metal parts might rust as well as the acrylic surface, and I will look forward to seeing that happen. 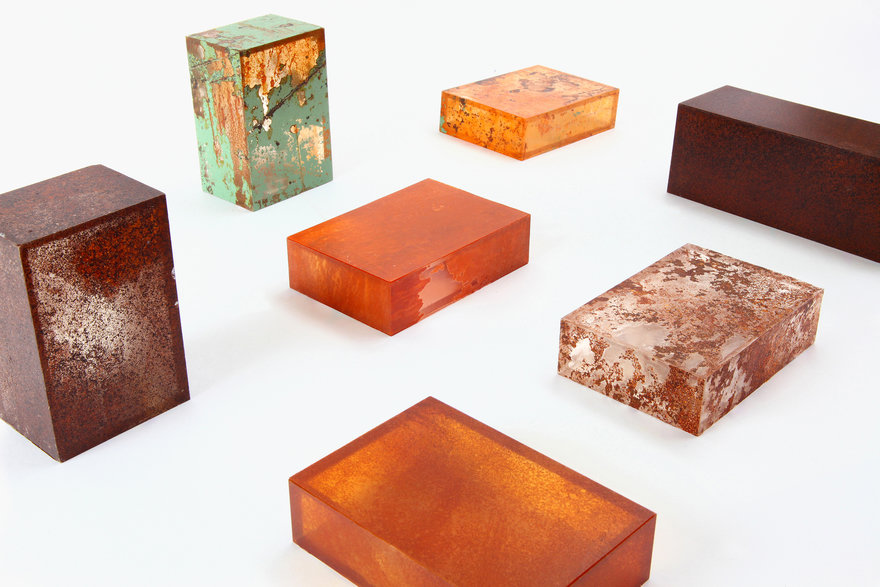 In the future, what would you like to use this material on/for?

I would like to use this material for spatial design as a building material in the future, such as a shops interior and architecture. It would be a beautiful environment if all the walls were covered with a rusty pattern, allowing light to pass even further. Since the material itself is acrylic, it has flexible manufacturing techniques and processes such as adhesion, cutting and bending. It is a beautiful material that has infinite possibilities.

Other than this rust harvest project, what kind of design do you normally do?

With my client work, I collaborate with Japanese traditional craftsman, proposing designs that make use of available technology. I also do product development and design direction for other companies. At the same time, I am actively engaging in independent projects, developing new materials and announcing new product designs and concepts. This "Rust Harvest" project started from my own independent project. 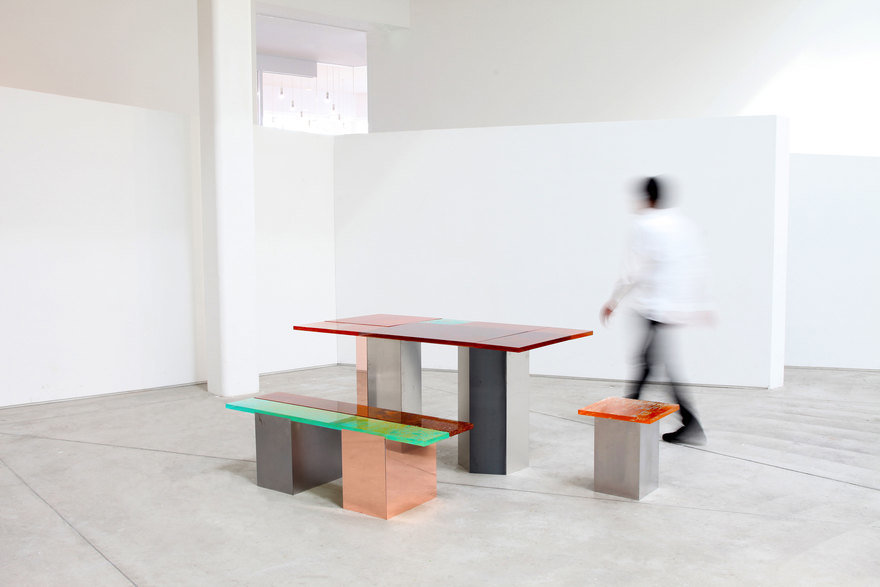 What other kinds of material would you like to handle after this?

The genre of materials is not important to me. Everything starts with research and experiments, and my job is to discover combinations of materials that nobody has noticed yet, how to use them, explore small ideas, shape them and finally propose them.

My job is to pick up a small phenomenon that others would overlook, explore new discoveries and events that lurk in my daily life, review existing concepts, expand those concepts and enhance the possibilities of design to reach a "new value". Regardless of textile design, furniture design or spatial design, my policy remains the same.