A few years ago when my colleagues were designing an aging-in-place walk-in shower for Jacuzzi, they rented a nearby virtual reality facility to evaluate a simulated version of an early prototype.

The VR facility staffer donned a suit packed with sensors, and the designers on Bresslergroup's project team were able to ask him in real time to interact with different elements of the prototype. Observing how some of the controls were in a hard-to-reach area, the design team immediately saw the value of changing these and other design elements.

Today we have the ability to set up and interact with a VR-simulated prototype whenever we need to, and without leaving our office – and the cost is a fraction of what we spent to rent the VR facility just a few years ago. And the technology continues to grow more accessible. If you can figure out how to leverage it for product design, it can easily translate to faster turnaround and cheaper development costs.

Foam core mockups have been a staple for industrial designers since the beginning of our profession. Once an object gets bigger than two by two feet, it's often useful to build some kind of volumetric model to evaluate placement of controls, positions of openings and doors, and relative scale compared to the users.

I was taught in my first years of design school how to meticulously craft by hand a presentation-worthy foam core or foam model based on CAD drawings. Laser cutters and CNC machines make this process more precise, efficient, and speedier.

At Bresslergroup we frequently build these models for clients to conduct ergonomic assessments and get feedback on in-progress work. Models can be built with moving doors and drawers to simulate usage scenarios and evaluate workflow. In most cases we make refinements based on learnings derived from interacting with these models.

But the larger models, such as the one shown below of the aging-in-place shower, can take skilled designers days and even weeks to construct. And if a large change needs to be made to the model, it again takes time and significant effort to modify. 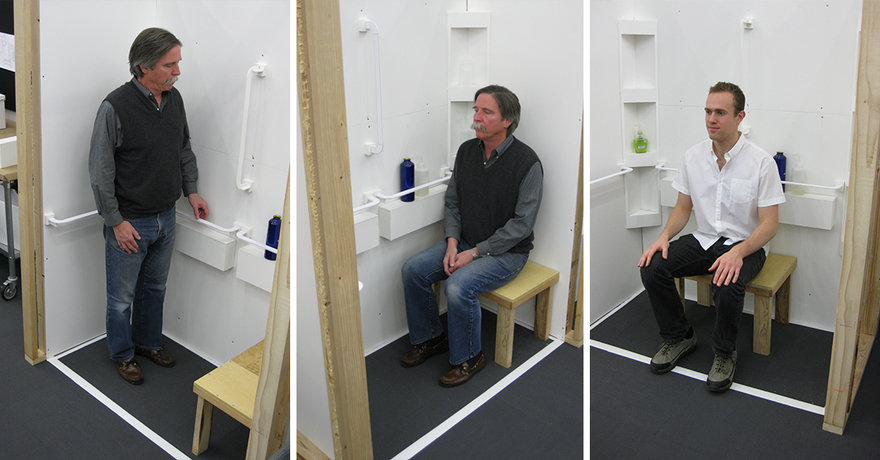 Transporting something of this size has its challenges. If a client isn't within driving distance, in many cases it's not feasible to deliver a model to a client's location. In the case of one model we built of a room-sized lab instrumentation system, we rented a truck to drive it (in pieces) to our client a couple of hours away. Then we re-assembled it on-site.

Enter VR. Devices such as the Oculus rift and HTC Vive have enabled consumers and professionals alike to embrace the technology, experiment with it, and discover its potential.

At Bresslergroup we've integrated VR into our workflow. Our CAD planning still begins in our chosen CAD platform of choice – readying the design for VR requires no extra work. But instead of iterating with physical materials, we can now quickly jump into VR to explore variants more quickly. 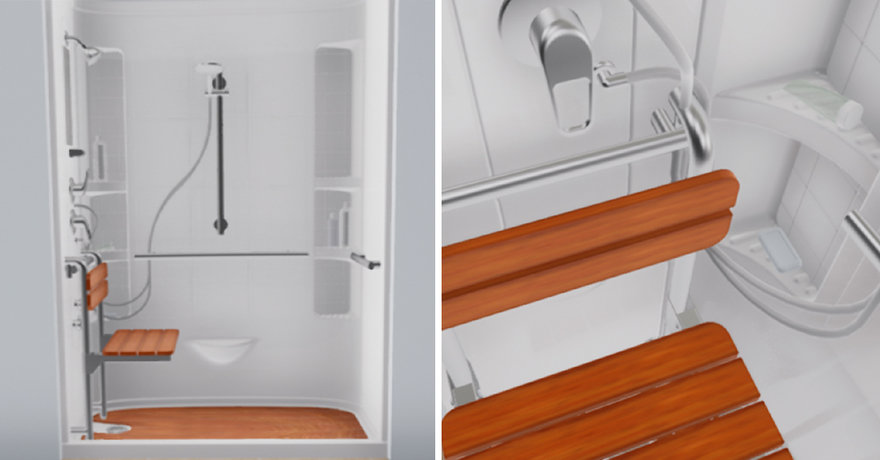 VR makes quick work of creating and playing around with variants to test our assumptions. Native CAD files can be imported seamlessly into a VR environment in just a few minutes. (Above are screenshots of the shower imported into our VR environment.)

Once in VR, different variants and configurations of this model can be evaluated side by side in full scale. Watch the video, above, to see how we can manipulate and move the shower seat and reach for shelves and grab bars while in VR, adding to the immersive experience. When designing products such as these, not only is access important but so is the ability to reach critical areas.

Have VR, Will Travel: Our Portable Setup

The ability to quickly try things out in full scale is an extremely important tool in our design toolbox. But when we want to share the model with our clients, the ability to pack it up and take it on the road is key. Below is a GIF of me unpacking the kit and setting it up – as you can see, it's a lot more efficient than building, deconstructing, transporting, and reassembling a foam core model.

Our setup consists of an HTC Vive and a VR capable workstation and of course, a case to carry everything. We have developed a workflow to quickly bring in Solidworks models with textures and shading.

We expect our setup to evolve as quickly as VR evolves (which is to say, quickly). The new Oculus Rift is $199. In a few years you'll be able to get an HTC Vive for that price. Google Chrome now supports web-based VR for the Oculus Rift; and more apps are being introduced to enable us to upload a CAD model, create a scene, and send it to a client. With one click, the client will be able to open the VR scene and interact with our latest prototype. 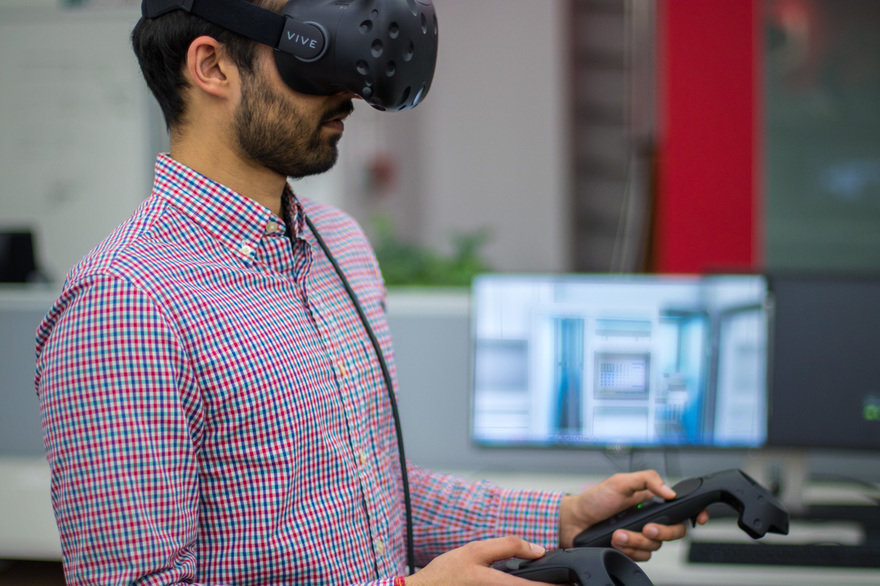 Today VR is usable and affordable for ergonomics testing and to test our own and our clients' assumptions. This lets us iterate and improve a design before we build a prototype. Before VR, if designers and engineers didn't have the time or budget to build foam core models, they would end up with very expensive prototypes that would then require changes. Now we can make sure the first prototype we build is optimized for ergonomics.

In the future, we expect to be able to use VR for user testing. (Check out this report from the recent HFES Symposium by my colleague, Aditi Singh's – she writes about the trend of Using AR/VR Technology for Human Factors Research.) This future is close—and it's exciting.

Tom became a designer to make thoughtful, long-lasting products — he's not a fan of throwaway stuff. He has a great sense of brand design language, and he welcomes product-branding challenges. At Bresslergroup these range from working with a startup who is branding from scratch to making a legacy brand’s new product line look different even if the guts are the same. He will often be the lead industrial designer on a project, working with the engineering and interaction design leads to illustrate a client’s design options, walk the client through the team’s recommendations, and document solutions. His first step is always to gain a thorough understanding of a client’s manufacturing concerns, branding strategy and impact, and user research. His happiest moments are when a client is uniquely satisfied. Tom earned degrees in Engineering and Industrial Design from Ocean County College and Auburn University. He honed his skills at Black and Decker, where he worked for eight years before coming to Bresslergroup.