Brilliant Materials Insight: Human Hair Can be Used to Clean Up Oil Spills

Here's a perfect example of analyzing a material's properties, then exploiting them to solve a problem. In 1989 an Alabama man named Phil McCrory was watching footage of the Exxon Valdez oil spill on television. The sad footage showed an otter drenched in oil--and McCrory observed that the water immediately around the otter contained less oil, as it had been absorbed by the otter's fur.

This was noteworthy to McCrory, as he was a hairstylist. As he explained to NPR:

And I was thinking, well, the otter was, you know, getting saturated with oil, then the hair that I sweep up should do the same thing. So basically, I took the hair home, put it in my wife's pantyhose, created a little imaginary [oil] spill [in a kiddie] pool, and cleaned the water up. Within a minute and a half, I had the water crystal clear, and all the oil was in the pantyhose loaded with hair.

Inspired by the footage, McCrory gathered a bunch of hair clippings from his workplace, stole a nylon stocking from his wife and stuffed the hair into the stocking. He then filled a kiddie pool with water and dumped some motor oil into it. When he submerged his pantyhose-and-human-hair sausage into the pool, he found that it soaked up the oil. 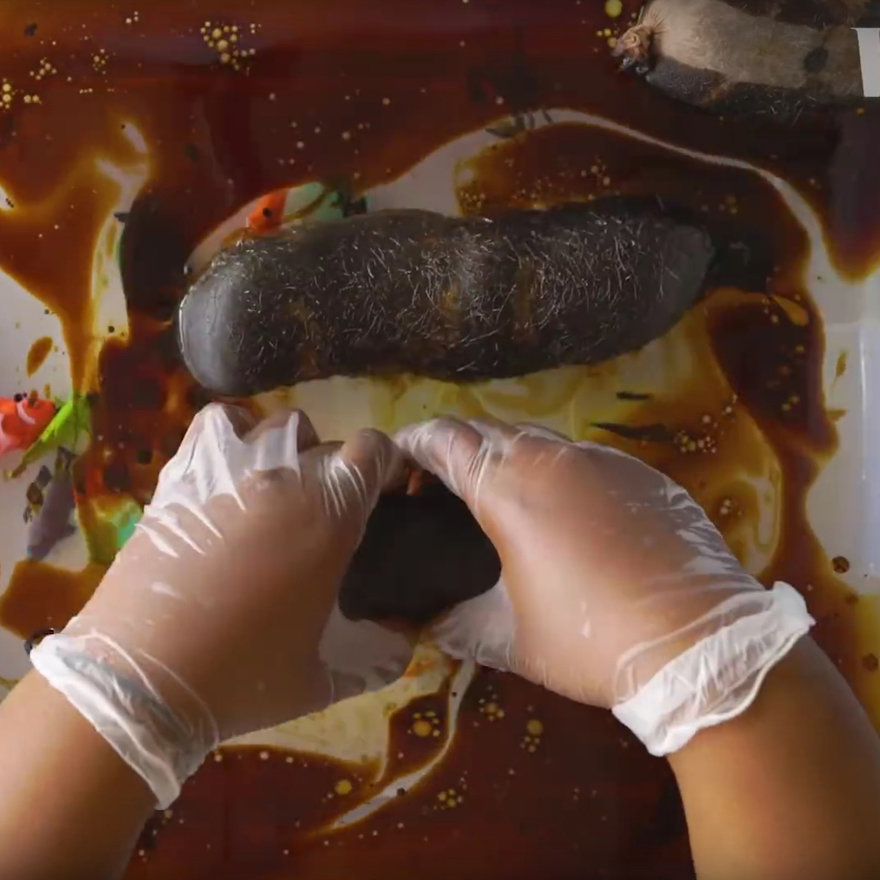 Today McCrory's company, Ottimat, harvests otherwise worthless human hair clippings--60 million pounds of it is discarded each year in the U.S. alone--to produce the nylon-stuffed sausages for oil spill cleanups. The sausages are chained together into long booms that are deployed around the affected area. McCrory's partnered with a charity called Matter of Trust, which coordinates hair and animal fur donations through their Hair for Oil Spills program. Here's how it works:

So what happens to the oil-soaked booms once they've done their job? It appears there's no clear answer:

- BP has declined to use the hair booms, stating that "they've had some difficulties in the use and disposal of hair booms in the past;"

- the BBC reports that "the options tried by the charity include feeding the whole mess to worms to break down into fertilizer;"

- the same article points out that chemist Malcolm Fox tested oil-soaked wool and "recycled the wool mats by putting them through an old washing mangle to recover the oil, which could also be used again;"

- McCrory himself suggests that "The oil saturated bundles can be burned as fuel and energy value of the petroleum they contain can be recovered."

Still, it's a brilliant first step to solving the problem of oil spill cleanups. Now someone needs to step up and figure out what to do with the cleanup materials.

Brilliant Materials Insight: Human Hair Can be Used to Clean Up Oil Spills