This story is part four of MakerBot's series of design studies, exploring the relationship between designers and their tools.

We started this design series taking a look at iterative design with bikes, and now we're ready to shift gears (hah!) to tackle an increasingly popular and more radical form of transportation: the skateboard. There's a long history of 3D printed skateboards online, from the daredevils at Braille Skateboarding who will skate absolutely anything to the early board designs on Thingiverse, but it wasn't until we joined Frog's skateboard challenge that I committed to designing a functional 3D printed skateboard deck. 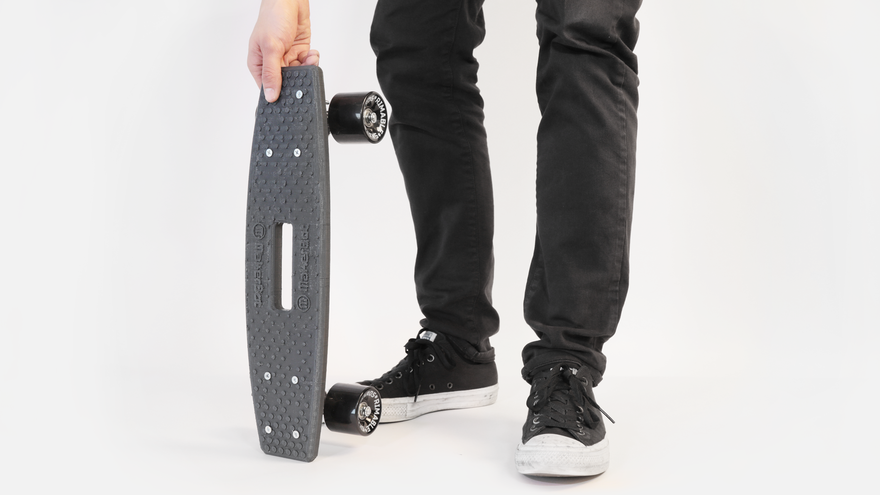 My goal was to create a deck that's compatible with standard trucks and wheels, lightweight and textured for tricking, while still durable enough to support the weight of your average Brooklyn hipster. Here's how I did it:

While the exact shape of a deck is up for interpretation, the length:width ratio and rounded edges are enough of a starting point to skip ahead and think about other design features. Using Rhinoceros with its parametric design plugin Grasshopper, I sketched out a rough shape and began experimenting with different lattices and surface textures.

Taking inspiration from organic forms like spiderwebs and barnacle clusters, I drew bounding boxes and set Grasshopper parameters to produce several different lattice boards. I wanted to push the limit of how sparse I could make the lattice while keeping it functional. Knowing these spiderweb-like boards may not survive skating, I set a backup plan to explore safer, more durable with a hand-hold in the center. 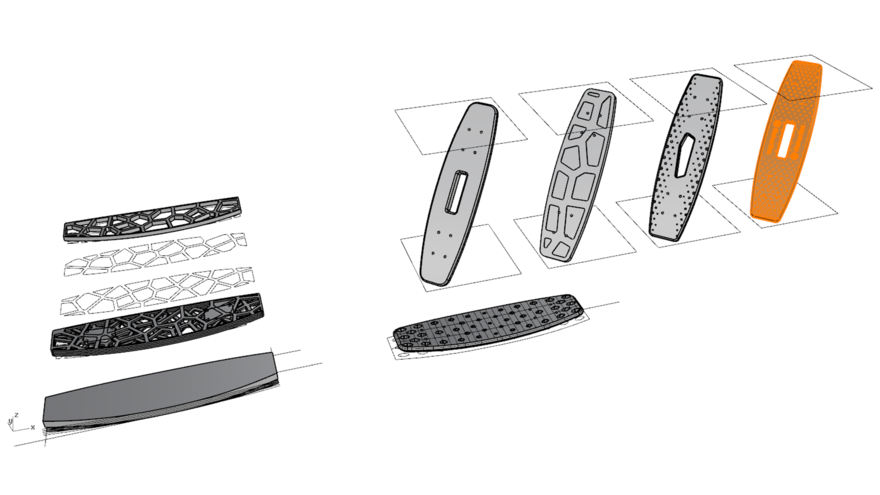 2. Design for 3D printing, stability, and the hypotenuse

Most 3D printers have a build volume smaller than your average skateboard, but happily I had access to the massive format MakerBot Replicator Z18. The build volume measures 12x12x18, but 18 inches was too short to carry both of my feet. I did the math on the Z18's XYZ hypotenuse, which enabled me to stretch the board 37% to a convenient 24.7in long, but that created a new challenge in the process. 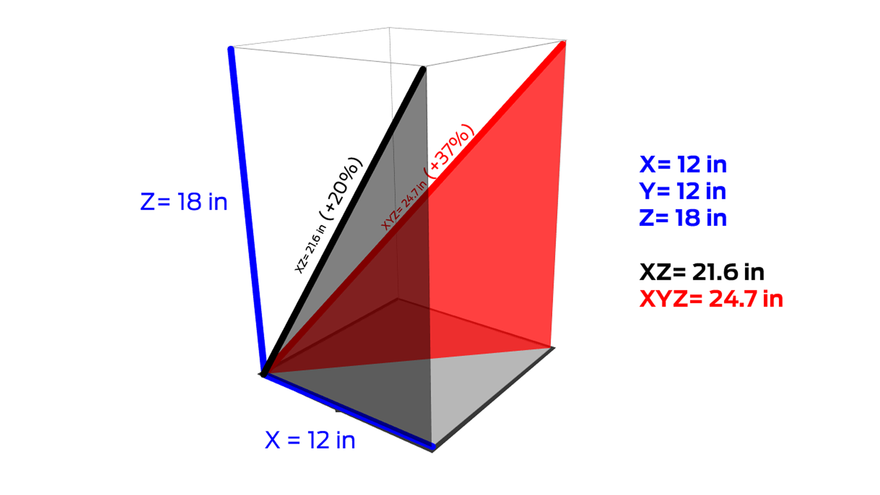 The board's center of gravity while printing wasn't directly above the contact point on the build plate, making it more likely to collapse under its own weight and fail the print. I considered taking the easy way out and adding a bunch of automatically generated support material, but that would add 30+ hours of print time and leave an ugly surface after cleanup. 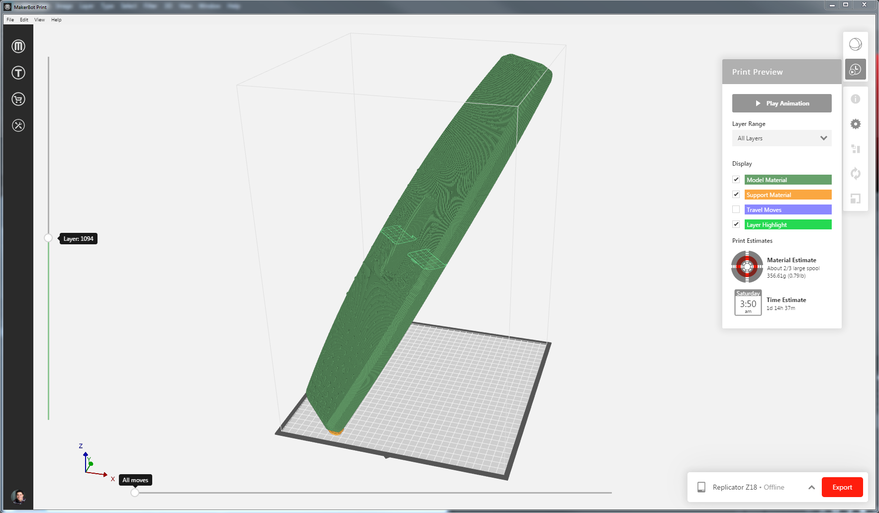 I loaded an early design in MakerBot Print and explored settings that would help the print succeed at this dramatic angle and still stick firmly to the build plate. Instead of using a "raft" (a sacrificial layer of support material that goes down underneath the model material) I tested out the new "brims" and "padded base" features. The wider base and extra brims offered enough surface area to resist peeling off the plate, confirming the hypotenuse print would work. 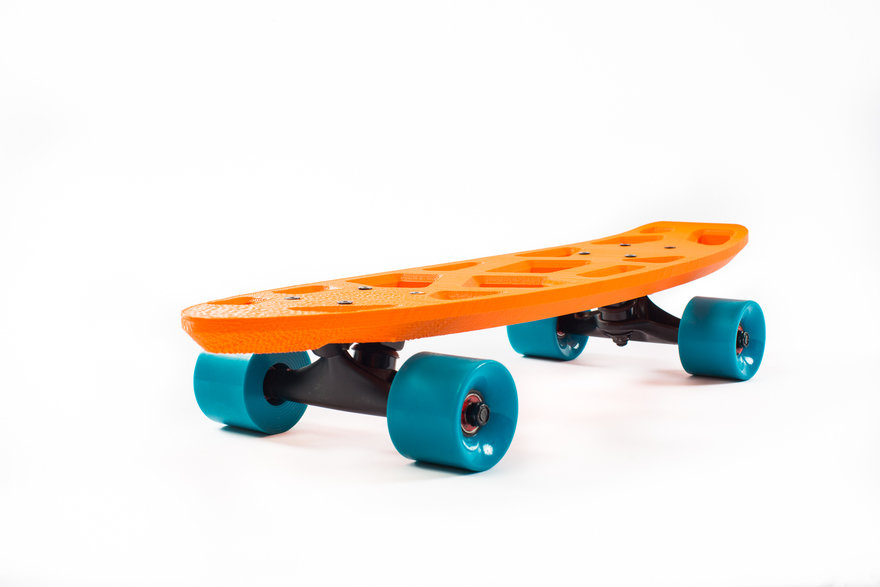 Next up was testing the amount of infill (internal structure) to put in the board, and how thick to make the outer shells. The more material I pack into the deck, the heavier it will be, so I focused on testing number of shells and learned that high shells (3-5) and moderate infill (15-20%) offers the best combination of weight and strength.

Before we talk boards, a quick word on materials. The material flexing in these pliers is MakerBot Tough filament (IMPLA). It's perfect for this application; twice the impact resistance of other 3D printing materials (ABS and PLA), high elasticity to flex and return to its original shape, and a tendency to deform instead of splintering so the trucks can be bolted on tight.

The first board's tail broke directly above the truck the moment our creative director Andrew stepped on. Taking a close look at the failure: I was surprised to see the fracture wasn't along the print's layer lines—which is common in failed prints. The break lined up horizontally across the lattice holes, making it clear that segment didn't have enough material. 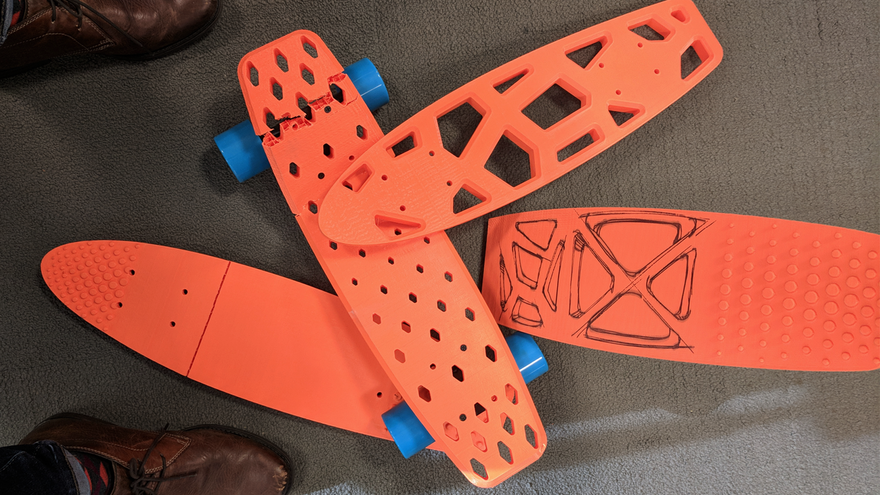 So I came back with a solid board, which survived a bit more of Andrew's tricking until he jumped on the center just inside the trucks. I beefed up the number of shells to 5 and decided to move forward with a new, less gargantuan test subject.

Product manager Lane had some solid moves, and the board survived! This was a fun, but absolutely critical part of the process. These functional prototypes delivered so much physical feedback I was able to make several design improvements at once, rolling into a very successful design in a very short time.

Hat tip to Occam's razor, in this case the simplest solution was the most successful. I fell back on a lightweight, hand-hold design and tweaked the parameters in Grasshopper to populate the surface with a gradient of textured bumps. The result is a durable, portable, and adaptable 3D printed skateboard that can stand up to the hazards of Brooklyn streets and support even the tallest of creative directors. 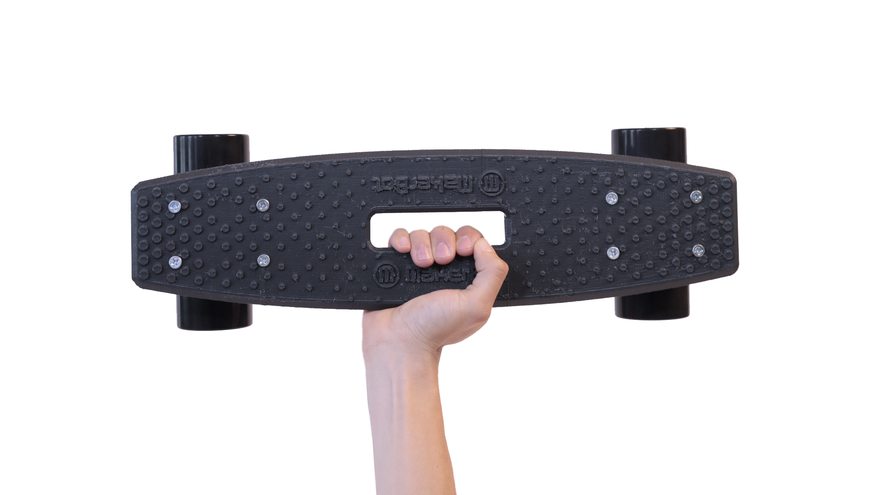