In my time, I've been part of many projects and designed pretty much everything, so in this second installment, I've decided to summarize the process of your average car design project. 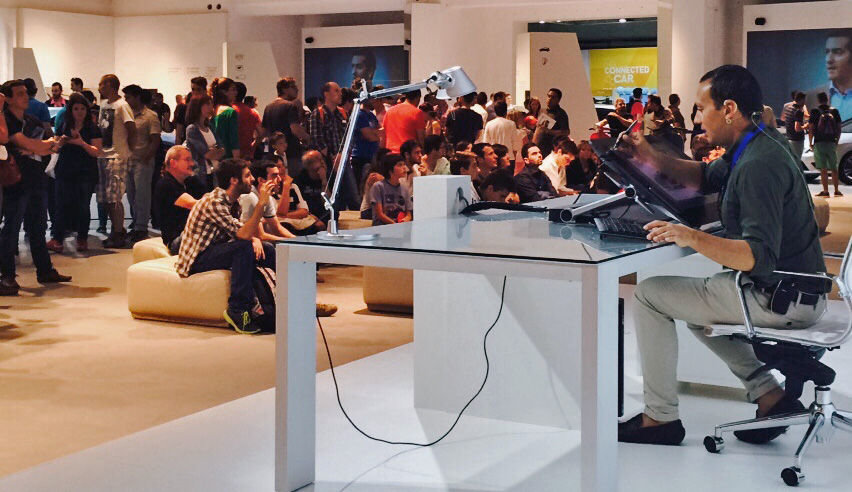 Saying "I'm a Car Designer" may sound almost too glamorous for its own good, but what it means, after all, is an office job. You check in in the morning and check out in the evening, much like most people in the world, except you have to have a sticker covering both of your phone's cameras. It's what you do in your office hours that is different and very rewarding—at least most of the time.

In my time I've designed engine covers, bumpers, grilles, rear view mirrors, many exterior design proposals... The lot! But I have to admit I've never had the chance to fully develop an exterior up to production or thereabouts, something I happen to have done quite a few times on interiors instead.

For this reason I'm going to write mostly about the design process of a car interior: the place where the customer passes most of its time yet often gets nowhere near the attention managers tend to give to exteriors during development. This isn't always a bad thing because an interior is a more complex object than an exterior, being made of a greater variety of parts and materials. It is also much more difficult to "destroy" with a single sentence for the mostly unqualified (in design terms, obviously!) company CEO at a big design presentation.

Of course this doesn't mean you can do your job less than perfectly: it simply means the feedback you'll receive will probably be more nuanced, and any non-design-trained upper manager eventually present at the presentation will throw less random "suggestions" and thus interfere less with your own good work.

Exterior designers often aren't so lucky: because everyone experiences cars in their daily life in one way or another, seemingly everyone feels eminently qualified to pass judgement on a design team's several month's work!

At such high-level presentation, the role of the Design Director is very important as a "buffer" between the design teams, which take huge pride in their work and often take things personally. But I digress...

Normally the interior design sketching phase starts a bit later than the exterior's one, to give time to the exterior team to at least give the new car some semblance of a shape. How many different alternatives may be sketched and how many "filter" presentations the material goes through may vary according to different OEMs and even according to the time constraints of the single project.

Once one or more designs are selected, more detailed drawings are made to support the first 3D modeling phase, where we encounter one of the figures that never get any publicity but has become the true backbone of car design projects: the digital modeler. In the car design field, two-surface modeling softwares are mainly used: Alias® by Autodesk and Icem Surf® by Dassault. Which software is best between the two is an ongoing argument that's far from settled and goes far beyond the scope of this post.

Anyway, with the package measurements for the new car loaded into the 3D software, plus eventual carry-over components, plus all the needed drawings and sections made by the designer (or designers) present and accounted for, digital modeling can begin: that's a phase that will be closely monitored by the designers involved, making sure the digital model will look exactly "right".

Remember this is still early stage, so not everything will be 100% feasible just yet, but it is nevertheless a first "reality check." Given that most production cars are made on shared platforms that can last more than one model cycle, the big hard-points for our new swanky interior will already be there. The steel carrier upon which the dash and its systems are attached is likely to be already designed and present, as will the HVAC unit, which is the climate-control system—a big, costly component that's always much bigger than the designer wants it to be and it is destined to survive many model cycles.

Positioning of the passenger airbag is also an issue, as its positioning is crucial for it to work properly and usually can't be changed all that much! Steering column positioning is also a given, together with the "envelope" of the various positions the assembly "steering wheel plus stalks and column plastic cover" will take in each of its possible adjustments: of course no interference is permitted! Seat frames are another hidden high-cost component that the manufacturer tries to reuse for as many model cycles as possible, so it's likely to be carried over and only the foams and exterior trim will be redesigned... As it's often the case for the steering wheel as well: the main steel core is usually retained while the exterior is redesigned. It's a bit like a bakery that brushes some molten chocolate upon yesterday's croissants to sell them off... But the end result can often be much "tastier", if the designers make their job properly!

By the way, from the 3D data the design models, or styling "bucks" will be milled, usually in clay parts fitted to a steel structure made according to the package measurements of the car. Two or three styling "bucks" will likely be presented, upon which the management will hopefully pick one favorite... Or, as often happens, demand to merge two proposals into one! Interior bucks at this stage are usually limited to the front seating area, where most of the design work is initially concentrated: dashboard and front door panels. At this stage, steering wheel and seats may still be off-the-shelf production items, put there just for show.

Needless to say, there is no such thing as a scale model of an interior: there's simply no way to properly evaluate an interior design without seeing it in life size and actually sitting on it, contrary to what happens with exteriors, which can be milled at quarter scale for an initial screening.

No matter how much virtual reality technology has improved, in my humble opinion there's no real substitute to looking at the models in the real world: not only gives me a kick every time, but it allows to properly judge how some styling features "work" in reality. For all the experience one may have, 3D software may still lead to overestimate the aesthetic impact of a certain surface change, chamfer or the like, because software are designed to visually magnify them to help you spotting eventual mistakes or defects. The clay phase is also very important because it gives the designer the opportunity to phisically modify the design buck, trying out some solutions or improvements that weren't considered or not even thought about during the digital phase.

Once a direction is chosen by the management, whatever that is, the buck is scanned and on that base the design team gets back to work repeating the process all over again, but in greater detail and concentrating more resources on the chosen design direction: one "lead" (a senior designer that's responsible for the overall result) will oversee the work of the junior designers that are helping out on a lots of issues while keeping track of the 3D modelling, dealing with engineering and manufacturing issues and how the eventual late additions of features that weren't originally planned (like a wireless phone charger or a bigger screen demanded for marketing reasons) end up impacting the design.

Depending on how each OEM is structured, there will be more presentations and the model will get more detailed as time goes on, up until a full seating buck that looks and feels like the real deal can be made. Such bucks take a lot of man hours to make and can become very, very realistic if so desired: I've seen people breaking door handles on them because they thought it was real and used it to open the "door". As time goes on all changes to the design become smaller, going into the details, the quality of the 3D model gets better, from C (styling in progress) to B then to A ("master" surfaces, used for making the production tooling).

Another aspect in which how OEMs are organized may differ is the presence (or not) of specialized "components" departments: I remember that ten years ago I was drawing all kinds of stuff needed for "my" design proposal myself, from radio faces proposals down to the graphics of the dials, while in a more recent project the opposite happened: despite being the "lead" of the interior project I couldn't even dare to pass judgement on stuff like steering wheel or gear knob proposals, as those were made by the "components" department... Heaven forbid if I encroached into the "component" boss's territory... You know, big companies have their own internal structures and politics! As you can see, there are many people involved and many decisions being made in what is quite a long process, so it's incorrect to state "this designer did this or that"... And yes, there will be a part three, stay tuned!