Intentional or not, this thread-bear backrest got us wondering—what would it take for public furniture to age gracefully?

When it comes to chairs—let's face it—few do things better than the Danes. As a visitor to Copenhagen, you could be forgiven for developing a nagging resentment as you inevitably begin to compare the aesthetics of your homeland to the unassumingly stylish public spaces—tripping over the many furniture design classics littering the capital's airport lounges and hotel lobbies, as well as, of course, the many cool-but-comfortable bars and cafés.

Having spent a lot of time on trains in and around Copenhagen on a recent trip, I can report that the local public transportation interior is clean and comfortable, whilst perhaps lacking some of the charming retro stylings we might associate with the country's furniture design icons.

I have no idea how old the interiors of the DSB trains I travelled on were, but the seating was showing the wear and tear of several years of heavy service—the moquette carpet seats faded and leather headrest shiny from touch.

The seats that were most used were clear to see (generally seats in a four, either in the center or near the doors) with blue backrest textile having been worn through. On sitting opposite one of said veteran seats, it struck me that the heavily worn backrest was revealing a new, not totally unattractive multicolor plaid-like pattern as it shed its threads. 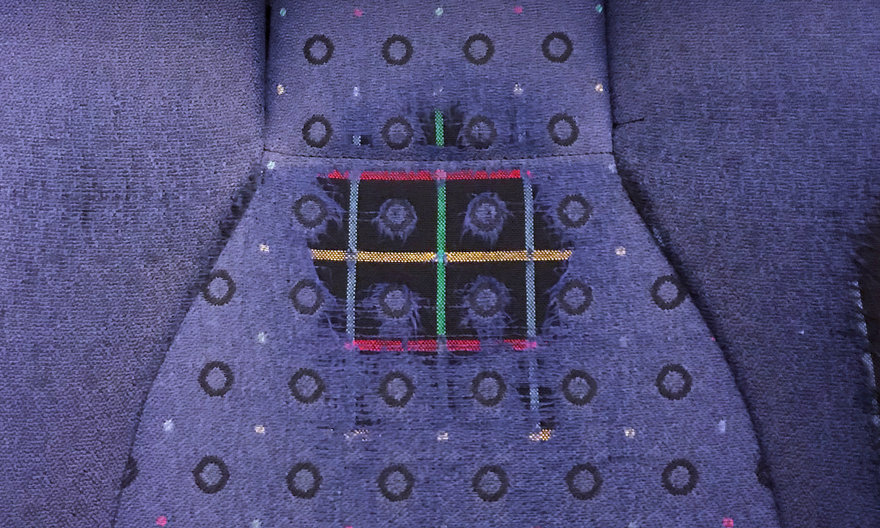 Not only did this distressed patch give a quite interesting insight into the multi-layered weaving that has gone into achieving those tiny coloured circles on the seats' original facade, it also got me wondering—what if heavily used public seating could age gracefully by revealing new layers of colour and/or patternation as it ages? (I'm thinking something like an upholstered chair-shaped gobstopper candy…) 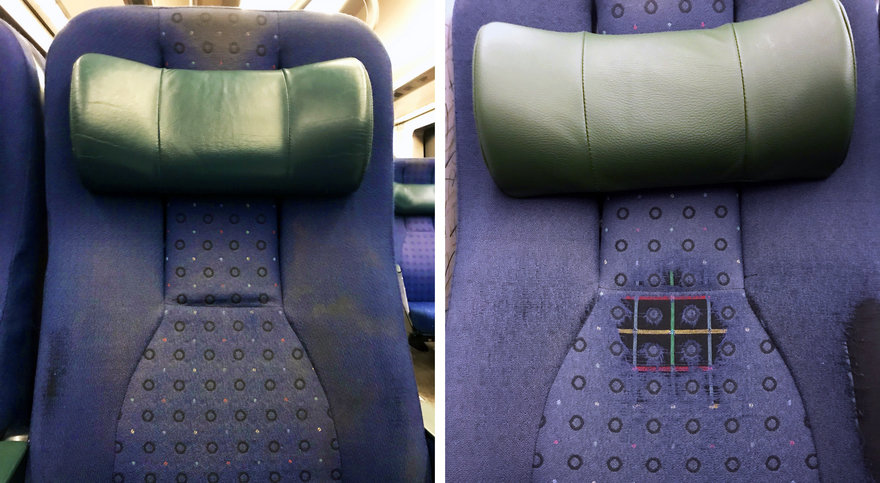 The before (right) and after (left)

Whilst the pattern being revealed on the Danish train seating was almost certainly an unintended design feature (and also, not particularly harmonious aesthetically with its blue predecessor), this wear induced evolution might point towards an interesting opportunity for the public space or public transport interior designer.

One for the Core77 hive mind – Are there any examples out there of textiles that change with age or contemporary public space or mass transportation interior designs that get better with usage wear?

Of course, the bigger question might be—is soft upholstery (as favoured by many European train/subway systems, as opposed to the hard plastic and metal favoured by the likes of NYC) still a sensible design choice in the age of mass transit in burgeoning urban centres? Some of the viral videos that Londoners have been sharing in recent years—comparing the relative filthiness of seating on various Underground lines—might well suggest otherwise...