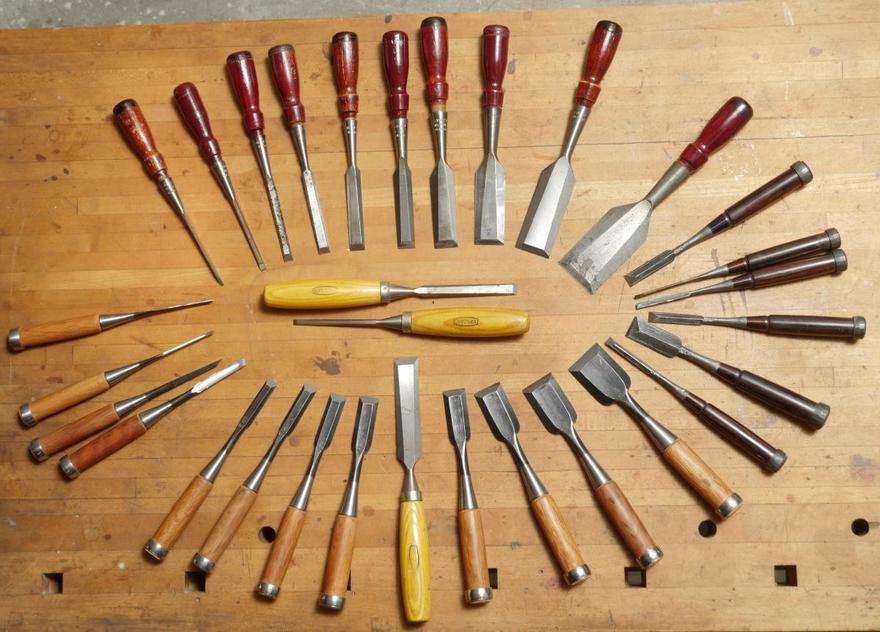 I was organizing some stuff in the shop the other day and I came across one of my old sets of chisels. As a tool collector, I have lots of tools that I have never used. The the four sets of bench chisels detailed here are different. They reflect different times and my evolution as a woodworker.

The very first set of chisels I bought - back in the early 1980's - was for my first or second class at The New School (then known as The New School for Social Research, then New School University - some consultants said search engines would be more impressed by the name - and now simply The New School). This was before I met Maurice Fraser, my woodworking mentor. This chisel set very much reflected a beginner's needs. I bought the set of four Marples bench chisels at Garrett Wade, the legendary woodworking store on Spring Street in Manhattan.

I quickly got disenchanted with the Marples chisels. I am not sure why, but in retrospect I bet it's because I could not sharpen them properly. I just didn't know how; what might have seemed obvious to others was beyond my comprehension at the time.

Pretty soon after getting the Marples chisels, I went back to Garrett Wade and bought a nice set of twelve Iyori Oire-Nomi. I chose Japanese chisels because I had just read Toshio Odate's great book, "Japanese Woodworking Tools." It was pretty obvious that (in accordance with the old saying about being a poor workman) it was far easier to find fault with my tools than to actually figure out how to sharpen efficiently. The Oire-Nomi were my most expensive tool purchase up to that time. I carefully stripped the oak handles and then sanded and refinished them with Watco. I also stamped the size on each handle. Of course difference sized chisels have different width blades, but when I had stripped the handles I also removed the sticker on each chisel identifying the respective size, and I thought it was vital that I replace the sticker with another method of identification. To this day I have a memory of stamping the sizes on each chisel - and I did a pretty good job. I should probably acknowledge that I had bought a number stamp set at a local flea market and was most certainly just jonesing for something to stamp. 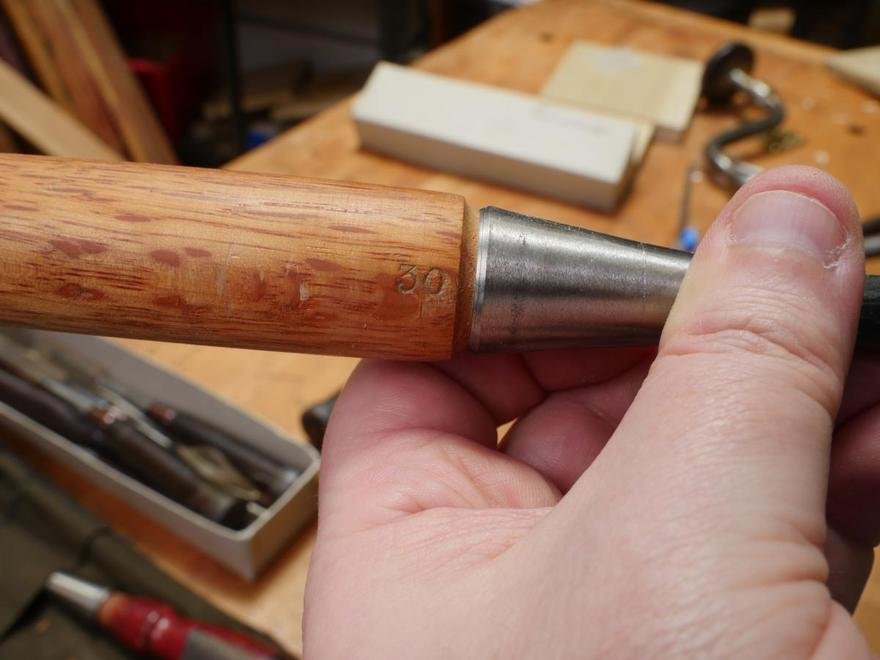 In the mid-1980's I started studying with Maurice Fraser. He had a set of Stanley 750's, possibly the most iconic of American style bench chisels. Naturally studying with Maurice made it clear that it was time to do some shopping. As Stanley 750's went out of production in 1962, this was a fine time to awaken my collecting gene. The assembly of my set took years, but as you can see all the chisels are in new or nearly new condition. One problem with the Japanese set I had is that the narrower chisels were almost square in section. This make cutting dovetails hard, and the 750's were a treat to use in comparison. Maurice taught me how to sharpen, which also influenced me as a woodworker and collector.

These are the chisels I used for twenty-five years. In that time I passed from an amateur woodworker/tool collector working in tech on Wall Street, to a guy who could get more tools directly from the manufacturer. When we started selling Japanese tools, I found that the chisels by Nishiki were the best I had ever used by any maker anywhere. So when for a short time we offered decorative chisels by Nishki, I decided to splurge and get myself a set of fancy dovetail chisels. These chisels have the longest edge retention of any chisel I have used, and are a joy to use. When I took a class with Toshio Odate in 2005, he made fun of the fact that the handles were made of Ebony, noting that the wood is brittle and hard on the hand. He's right. Setting the hoops was a nightmare because the Ebony would not soften. I ended up soaking the handle tops for hours and still had problems. But the Ebony transmits hammer blows very directly, a characteristic I like that very much. In retrospect, I would like to have a set of the Ashley Iles dovetail chisels. But aside from the samples in the shop -- that I use whenever I can -- I don't get much of a chance. They seem to sell out too fast for me to snag a set (customers always come first at TFWW). 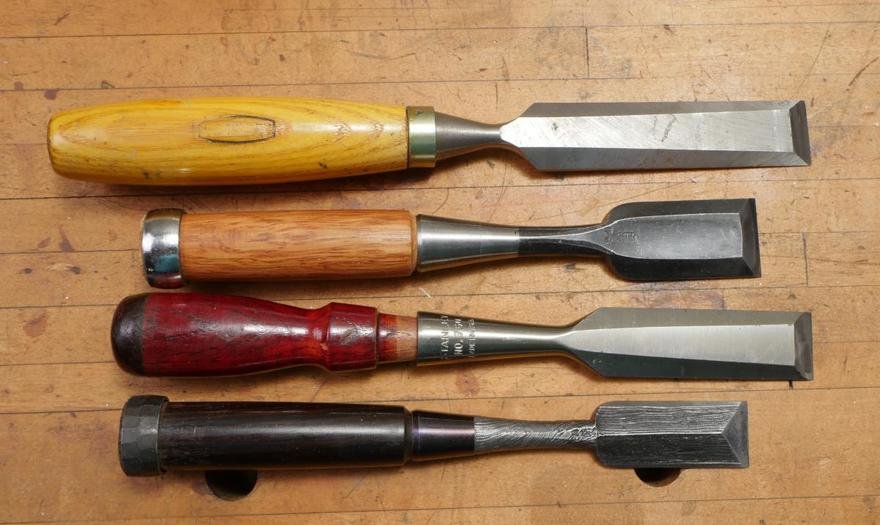 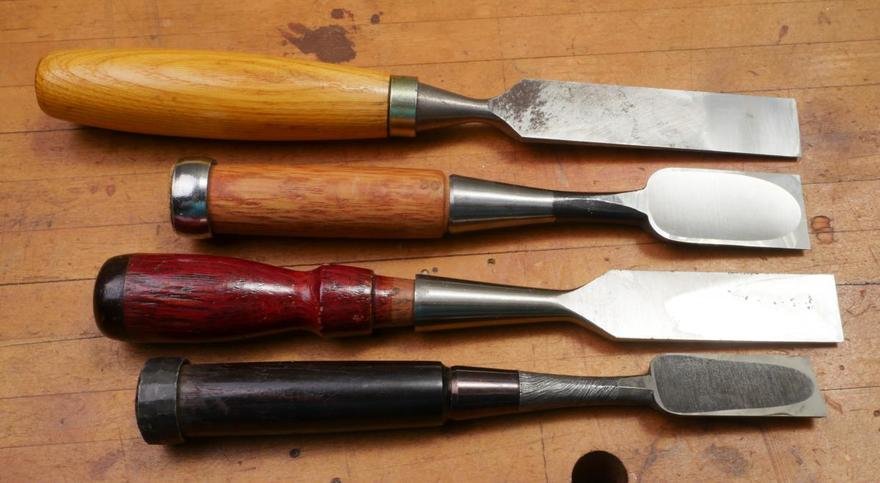 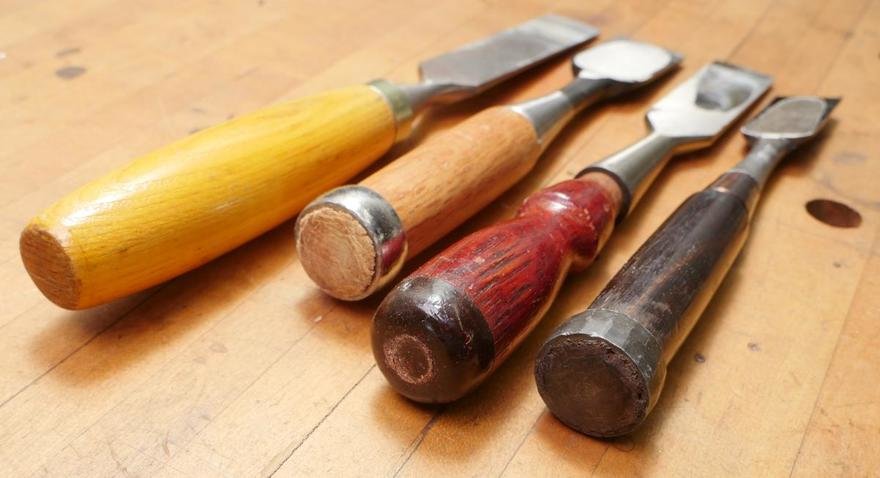 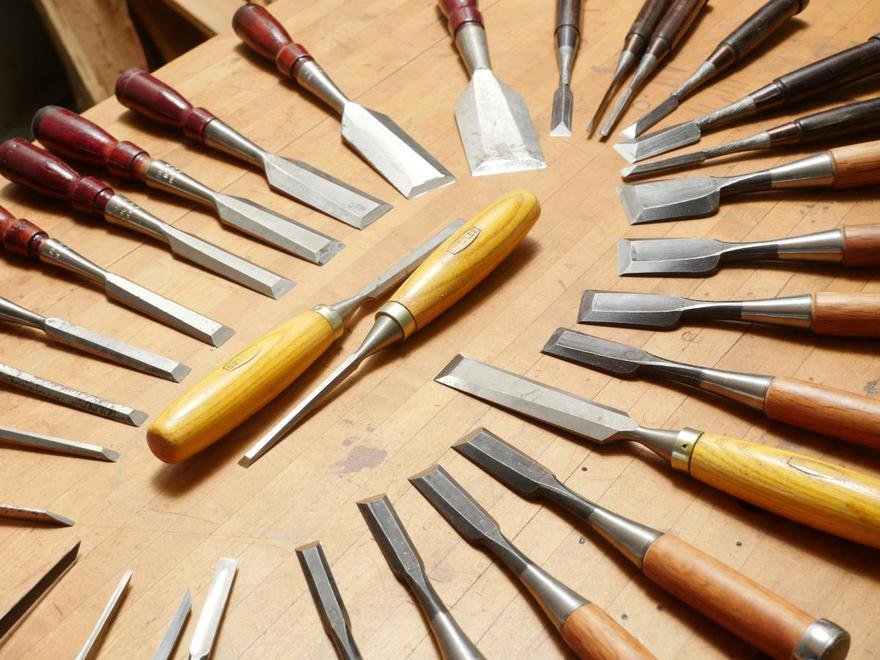 I don't use my Marples chisels anymore but they deserve a place of pride in my tableau of chisels because they started me off. 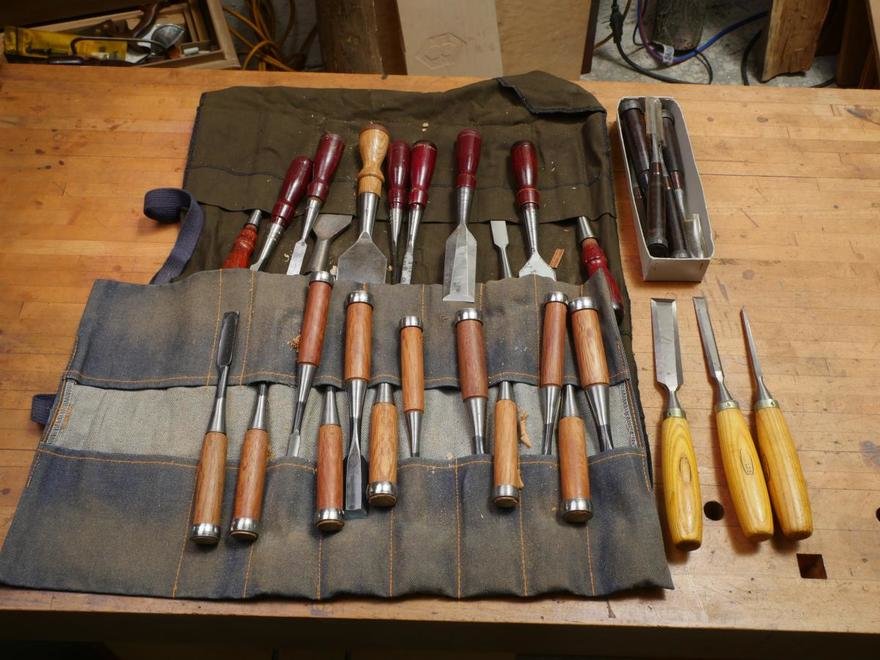 Normally my chisels are stored in chisel rolls.