An innovative, funky shape leads to a faster, safer building

When there's a natural disaster and our government is paying attention, we send scores of physically-fit, militarily-trained young men and women to the site to render assistance. This is a logistically massive task. For starters, all of those men and women need a place to sleep in between shifts.

Tents would be the easiest to transport, but are unsuitable for extreme weather conditions. So wooden-framed barracks are typically constructed on-site. While organizations like the U.S. Army Corps of Engineers have barracks-building down to a science, each barracks still takes a crew of eight people five days to build, and the wood must be shipped to the site.

That's why the U.S. Army Engineer Research and Development Center is trying to figure out how to do this faster and cheaper. They've set up a project called ACES-- Automated Construction of Expeditionary Structures--and are making great strides using massive concrete-spewing 3D printers and the services of a top-notch architecture firm. 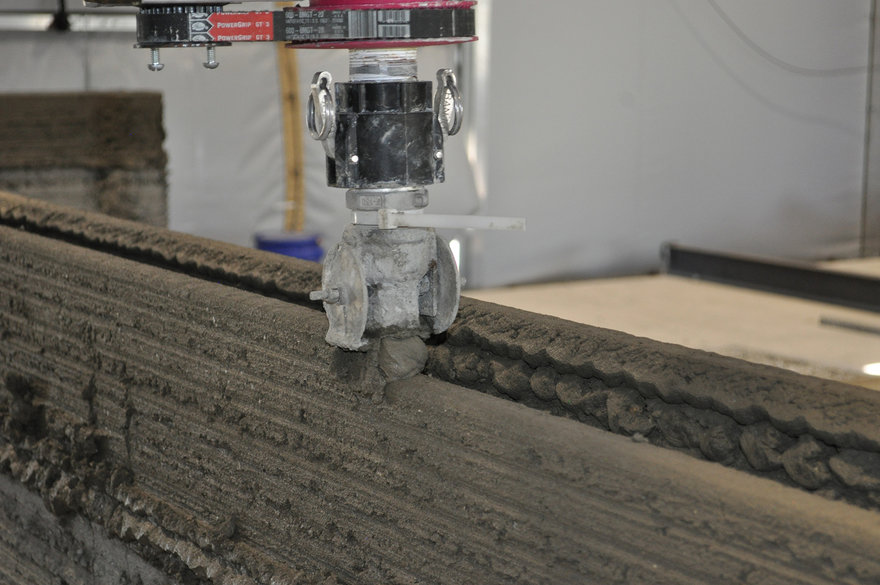 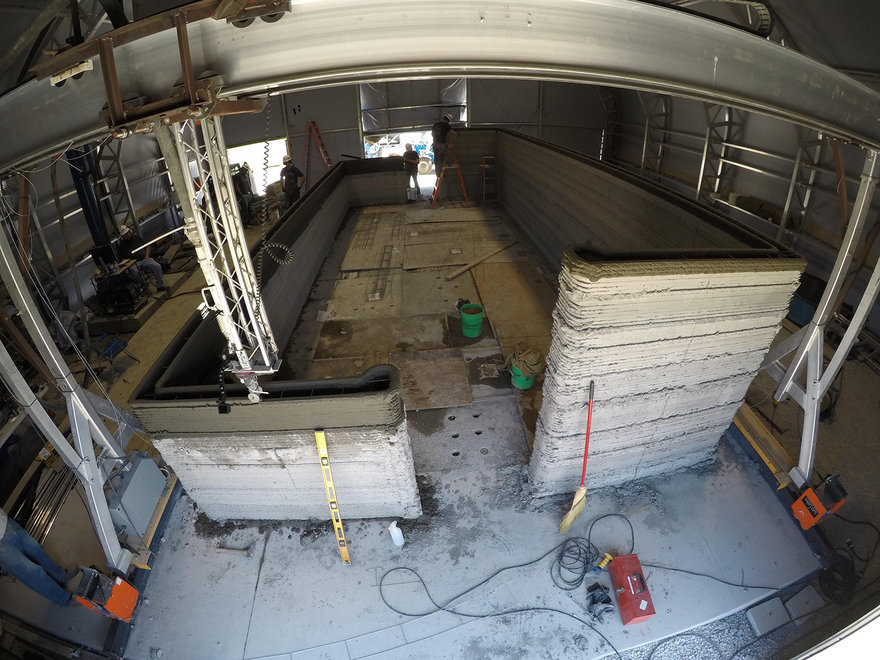 The ERDC contracted Skidmore, Owings & Merrill, who had previously done a project with the U.S. Department of Energy and were thus on the government's radar, to help them design sturdy barracks that could swiftly be 3D-printed in concrete. One of the problems with 3D-printed concrete is that it can crack at the foundations more so than cast concrete, and another is that it must be reinforced for strength. SOM solved these issues by designing a rather funky-looking wall that, understandably, initially attracted skepticism. 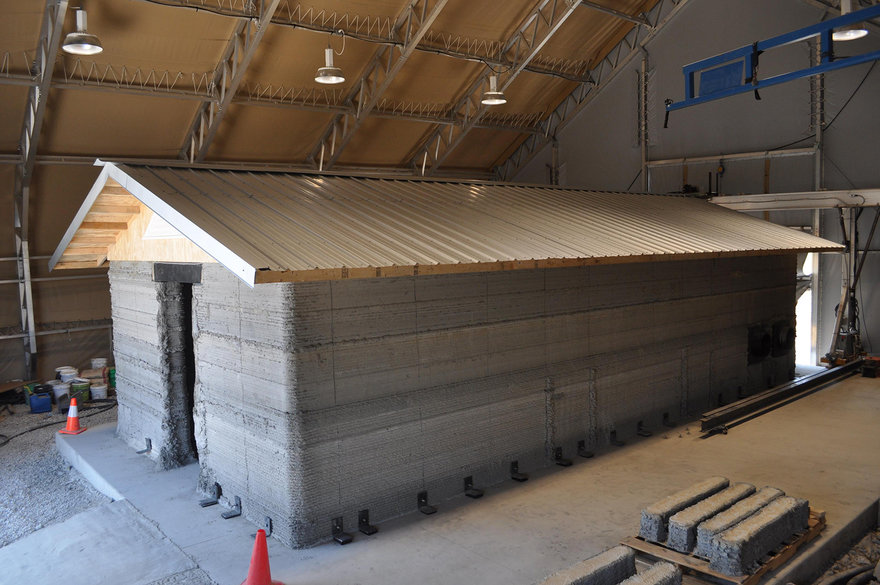 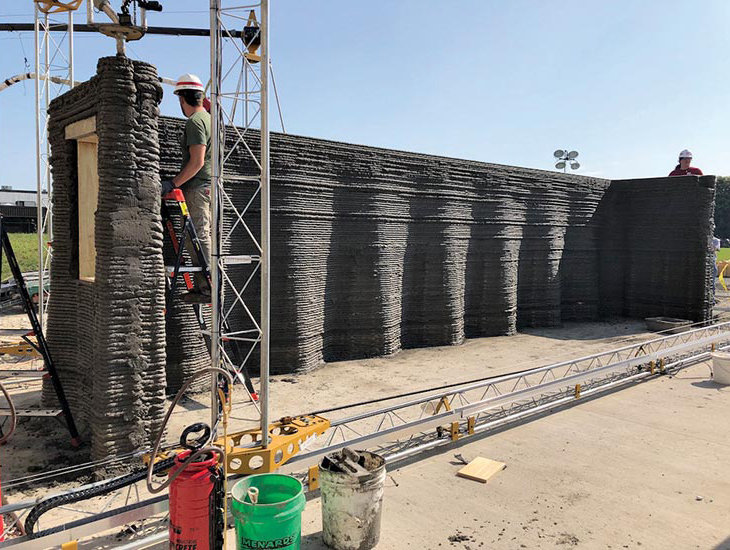 While the wall is straight at the top, down at the bottom it undulates, as if following the path of a slithering snake. At first glance this seems like a bad idea: Because the wall transitions from this zig-zag shape to dead vertical, it means that during the printing process, each layer of concrete slightly overhangs the one beneath it. That seems like an obvious no-no with 3D printing, and "when [SOM Associate Director Benton Johnson] first proposed the idea of the undulating wall, most of the team was hesitant," ACES Program Manager Michael Case told Engineering News-Record. Additionally, the undulating wall design requires 15% more concrete.

Undaunted, SOM printed up three walls to prove the concept: One straight, "normal" wall, one supported by a pilaster and one in the undulating design. Each wall was tested for both practical printability, and strength to the point of failure (i.e. they tested them until they broke). The undulating design proved to be "more efficient at resisting overturning moments" and "reduced the potential for shrinkage cracking near the foundation." Additionally, the shape "provides 2.5 times the strength in the wall's out-of-plane direction, is self-supporting during construction and allows field changes of the building shape without a total re-engineering." The undulating design was thus selected.

To further reinforce the structure, rebar anchors are embedded within the foundation, which 18-inch rebar dowels are plugged into "after the first lift of the printed wall."

In subsequent testing with three-man crews, ACES and SOM have "learned we can potentially build a building in 48 hours of clock time," according to Megan Kreiger, ACES Project Manager. That will come after kinks are ironed out:

The biggest problem, aside from exhausted crews, involved maintenance. Operator errors and printer malfunctions had had a cascading effect, causing the material, which sat longer in the mixer, pump and hose, to begin to cure and build up on the sides of the equipment. The equipment had to be cleaned.

…The team learned that for continuous printing, two or three dedicated crews--pretrained and working in shifts--are critical.

For SOM, the two biggest lessons are that concrete material performance is critical and stopping the printing process must be avoided, says Benton Johnson, an SOM associate director.

Even so, the early results are promising. ACES' 3D printer can be placed on a pallet and shipped on a C-130. Acquiring concrete from local sources would be easier, cheaper and faster than shipping wood. And if three crews are used in rotation for non-stop production, the building time is projected to be as low as a single day per structure--versus five for a wooden-framed structure.

The next step is to get a pre-cast concrete roof onto the structure (as of now, 3D printing a roof is still impossible), which should be completed by this month. Following that, a report with design guidelines will be produced. We'll be reading it with great interest.