A recap of one of LDF's most exciting exhibitions

100% Design is one of the biggest jewels in the crown of London Design Festival, and this year's show floor was generously encrusted with some proper gems from emerging talent. Fresh twists on traditional furniture forms and use of materials resulted in must-see highlights that surfed a rainbow of traits from playful and emotive to inspired and elegant. Take a brief tour of the exhibition below: 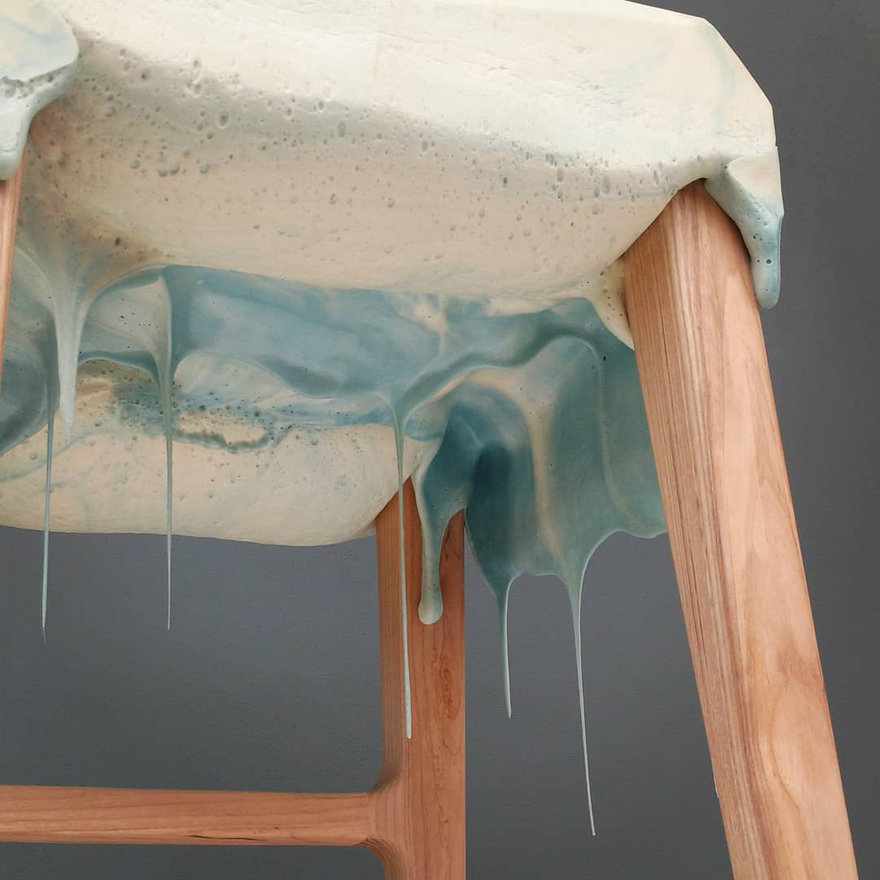 Winner of the Design Fresh: Product of the Year, the Eris Bar Stool is a bonafide melon-twister when it comes to expectations of looks versus feel. Conjured up by newcomer Joe Wonham, the seat is made using polyurethane expanding foam. The foam is squidgy to the touch, yet looks like a rock-solid piece of chiseled stone that appears to be melting onto a solid ash frame. Brilliantly disarming and oddly handsome, it can't help but ooze character. 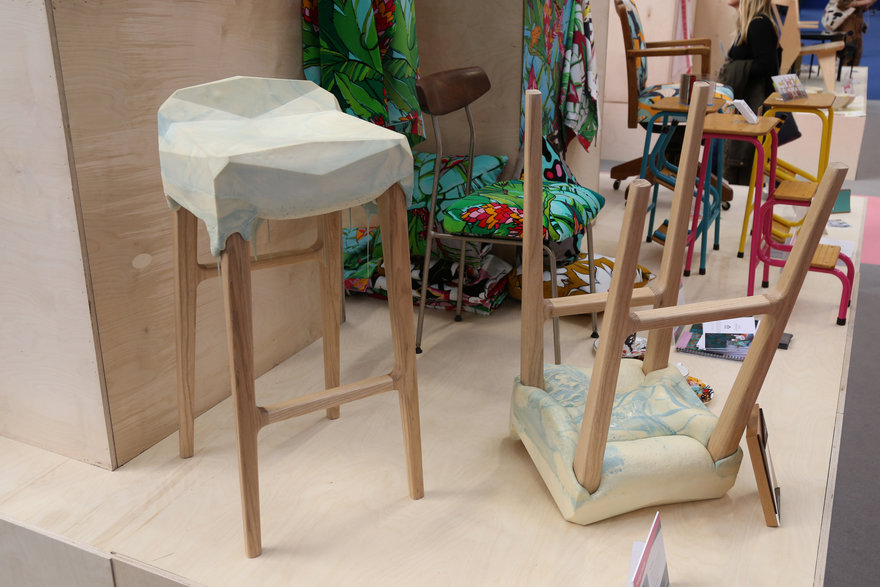 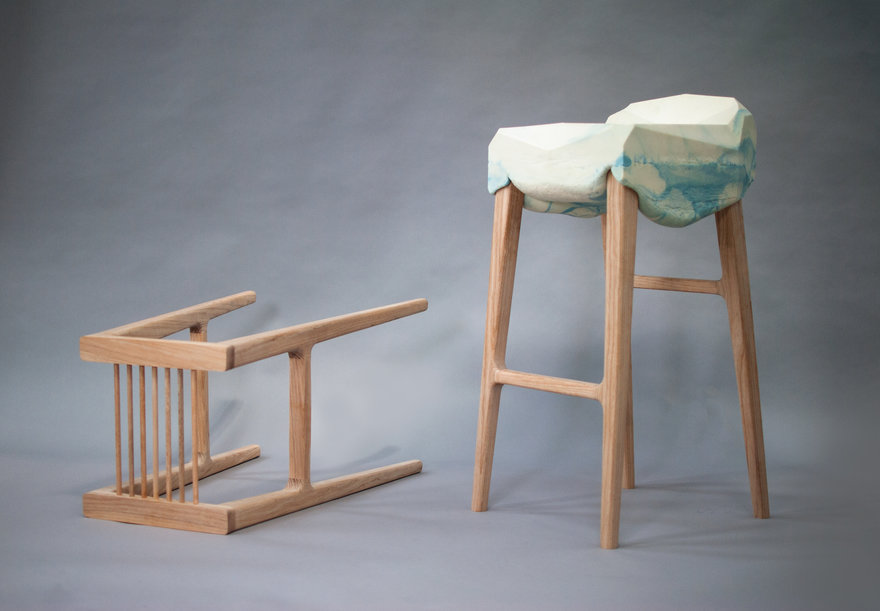 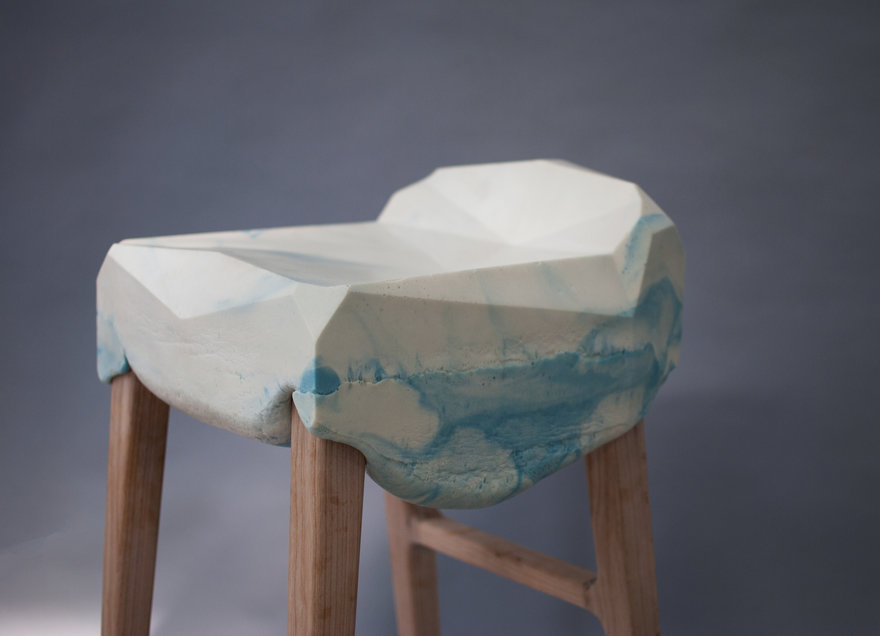 Marbling madness. It's upholstery, but not as we know it 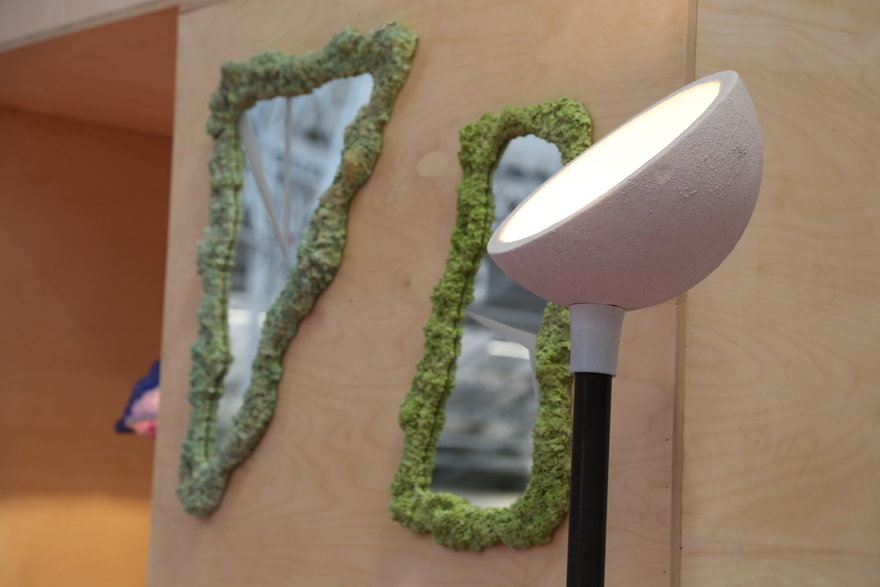 Brainchild of designer Atticus Durnell, That's Caffeine is a project that takes the waste from your flat white and transforms it into long-lasting furniture and products. "In the UK alone we generate more than 500,000 tonnes of coffee waste annually, the majority of which is sent to the landfill. This, in turn, creates 1.8 million tonnes of CO2 emissions." Made with used coffee grounds blended with biodegradable resin, Durnell hopes to help put a dent in the amount of coffee waste that goes to landfill each year by putting the waste to handsome use, brought to life in this standing lamp and coffee cups created to kickstart the concept. 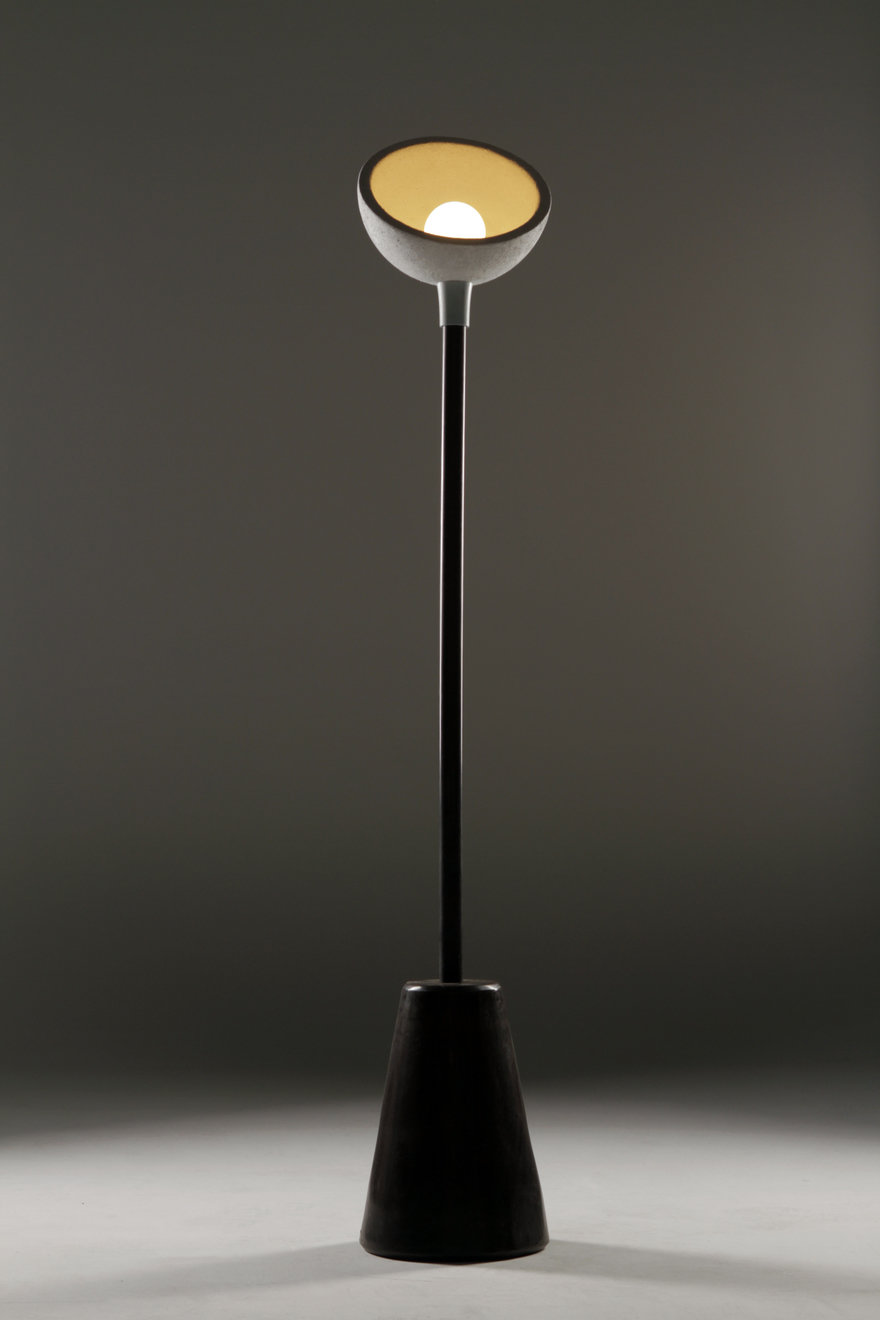 Durnell says the approach could be extended across a range of furniture, fittings and equipment 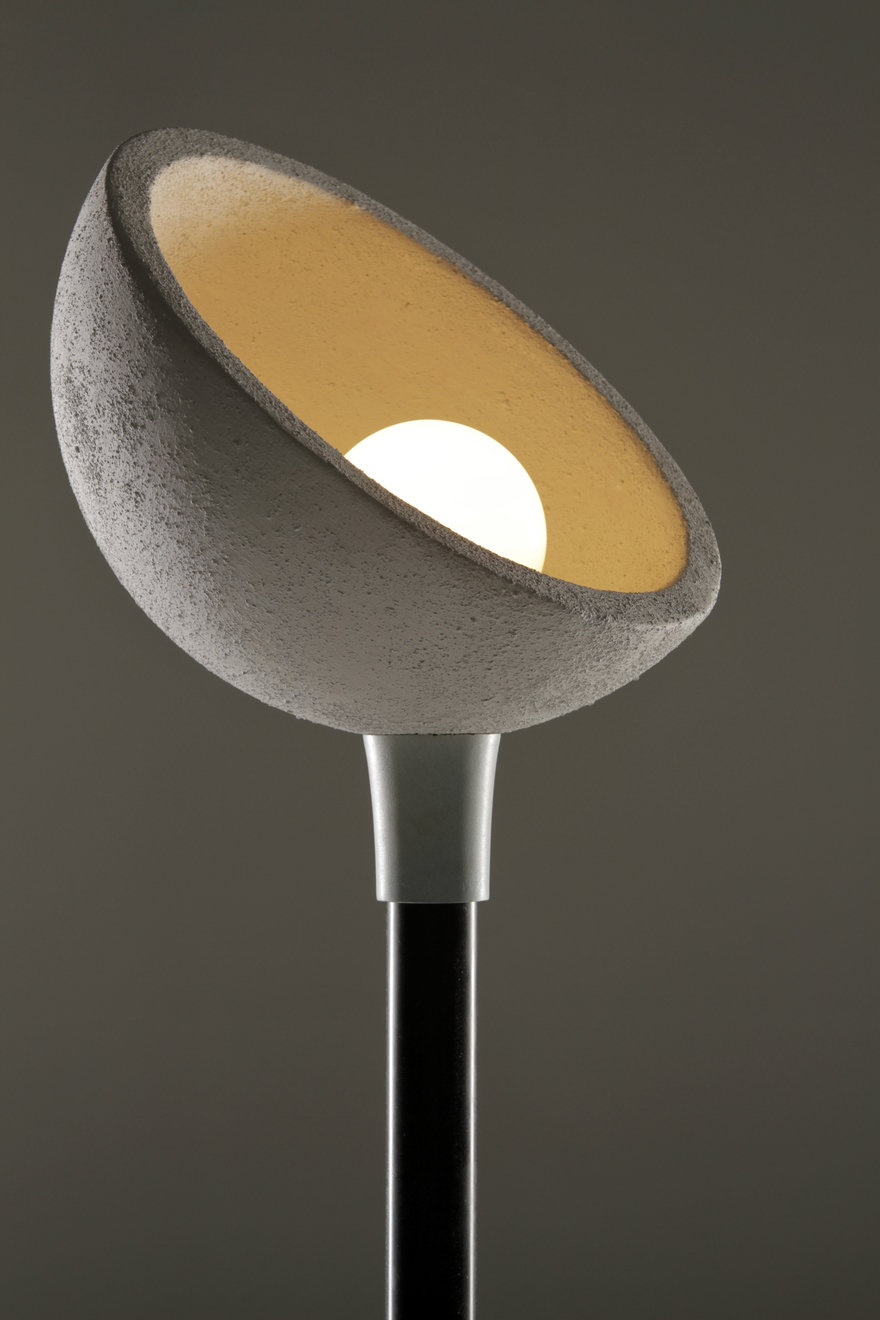 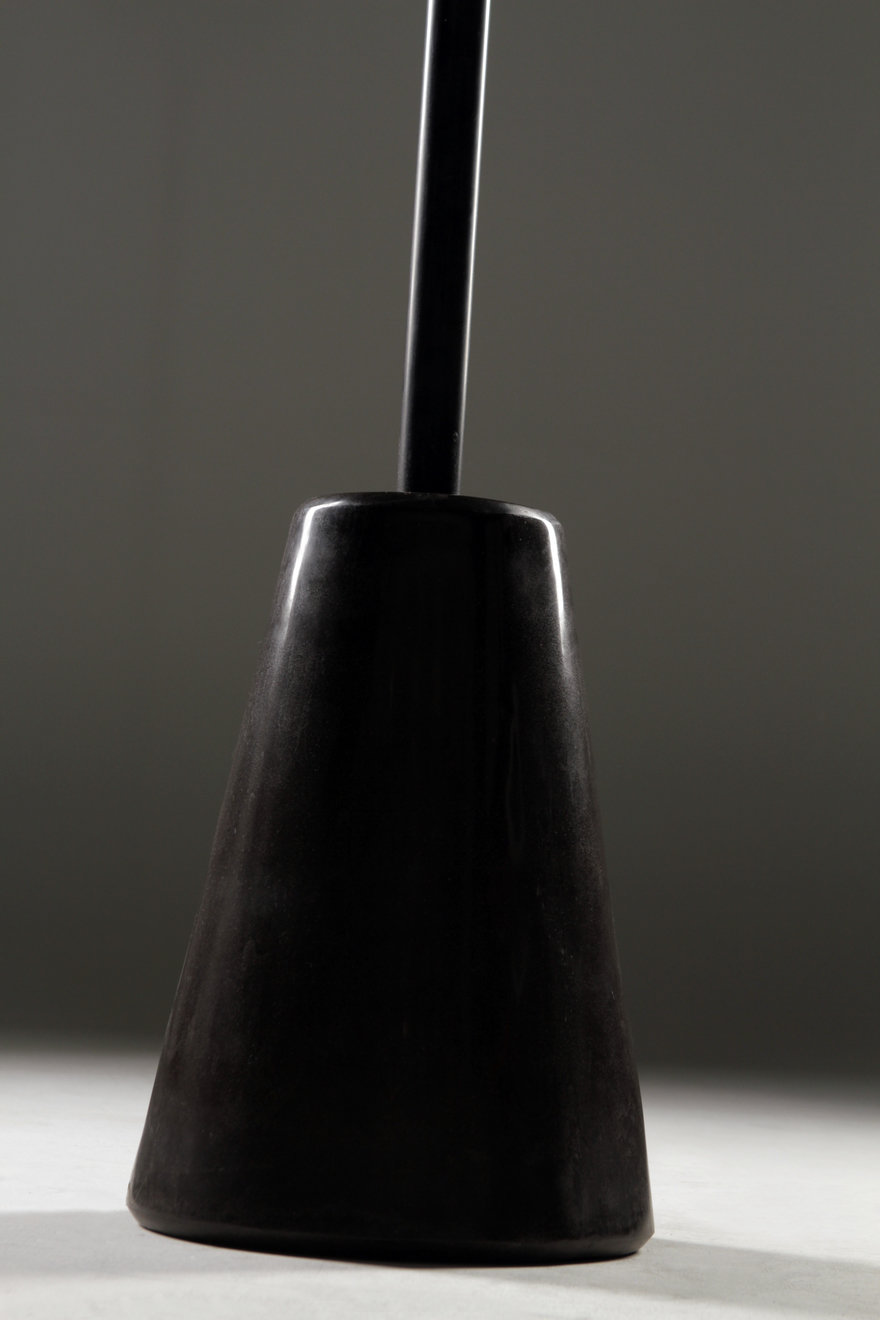 Coffee shops are an abundant source of the raw material 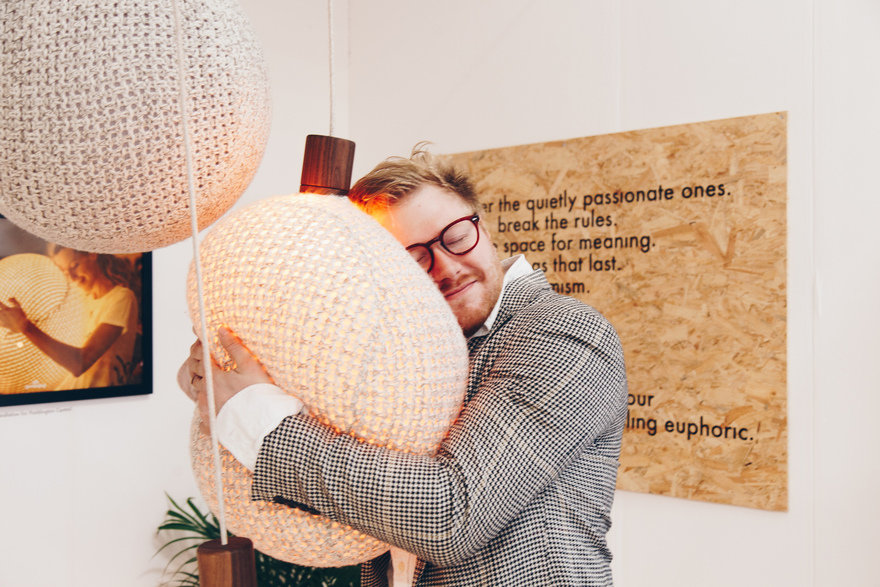 A great product name… and all the instructions you need.

The notion of plucking a balloon light from the ceiling like a giant grape and hugging it to make it glow sounds more akin to something you'd find on the set of a Tim Burton movie than on the show floor of a design festival. And that's the wonderful thing about Pluck & Hug—it's a bit magical. It genuinely feels great to simply squeeze the super soft cotton yarn covered balloon and witness warm light shine brighter the tighter you hug, thanks to a smart internal pressure sensor. When you're done hugging, you just snap it back onto its magnetic pendant stem. Developed over four years, and starting life as a temporary art installation, it's finally going to make it into the wild through a Kickstarter campaign that's set to launch soon. Keep an eye out. 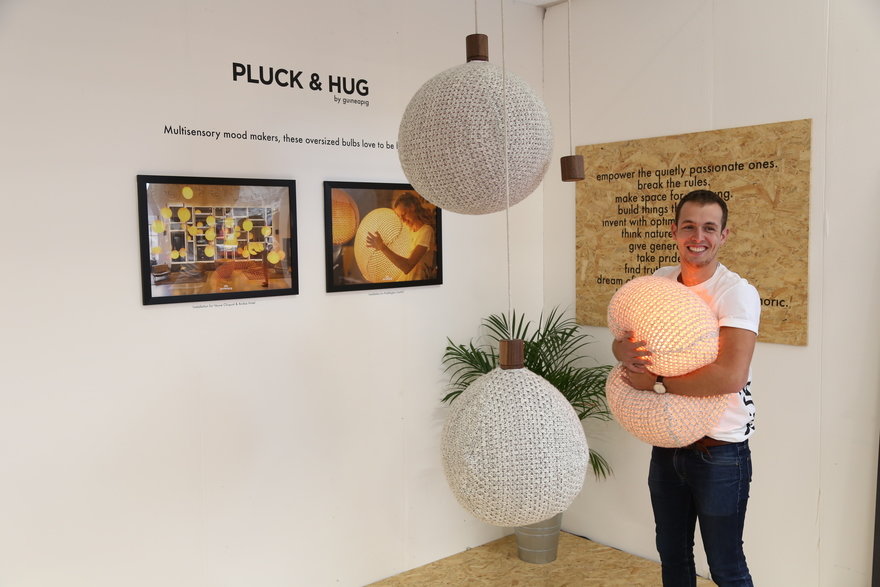 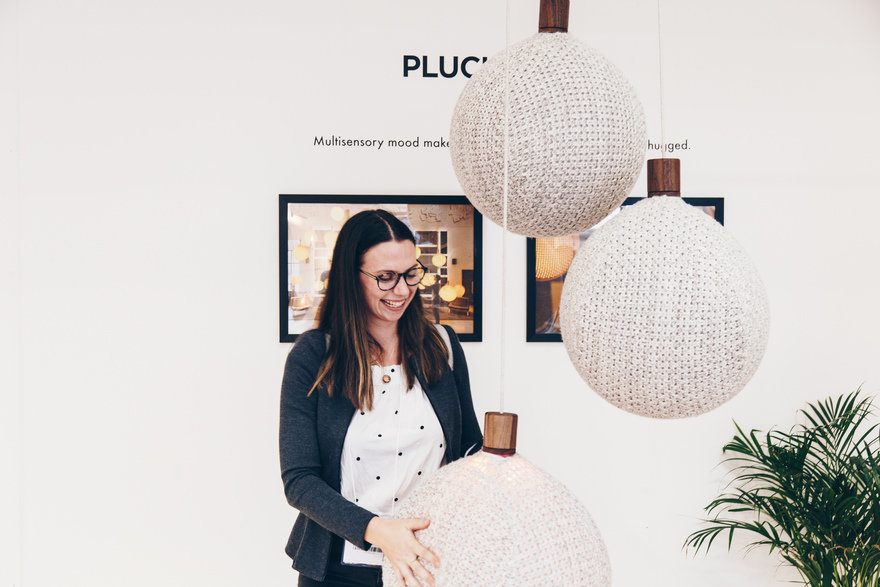 The outer cover is made of super soft 100% cotton yarn 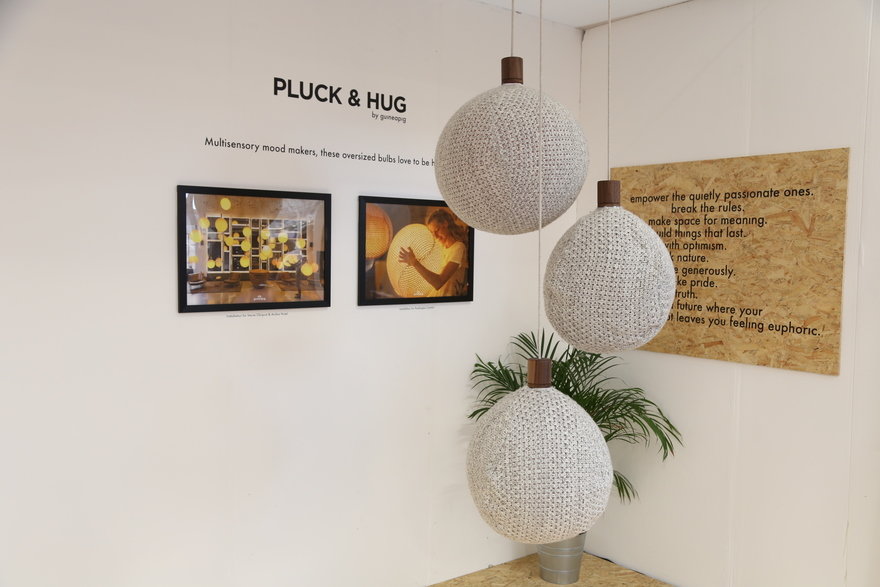 A bunch of hugs just waiting to happen

Designer Michael Hilgers is on a mission to create furniture for small spaces that maximize every possible millimeter. Twofold is one of his latest products, designed for Müller, and it uses an ingenious twist mechanism to turn a narrow bookshelf into a great little work desk. There's also a small slot in the shelf for your laptop cable to pop through for added tidiness. It's the little things. 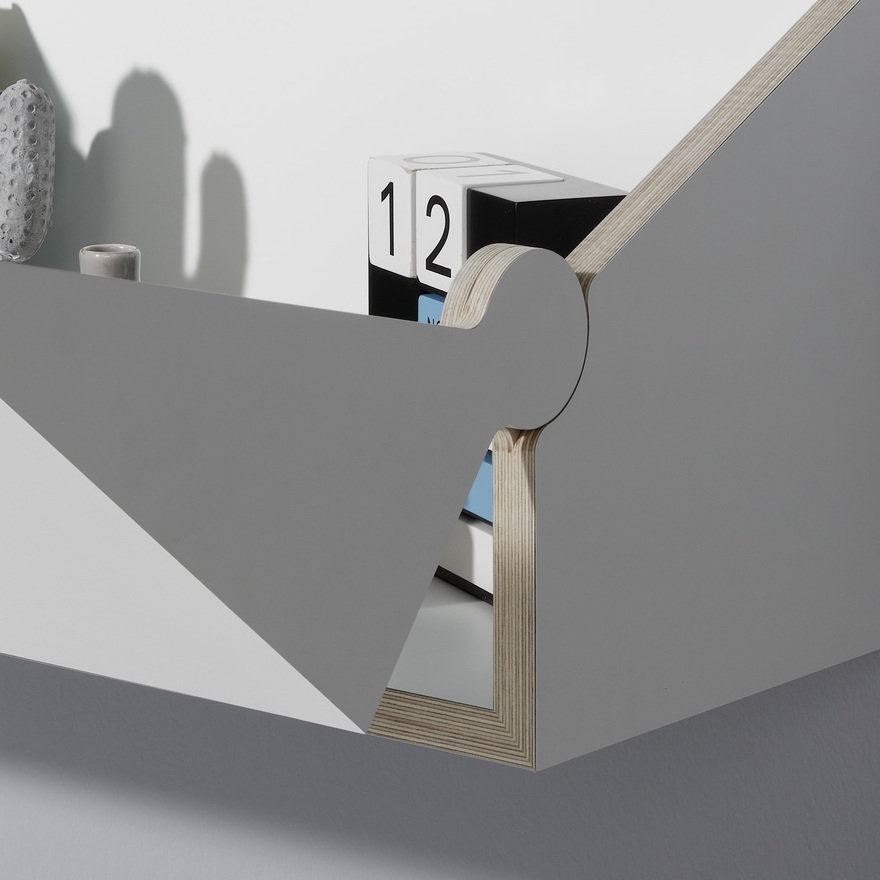 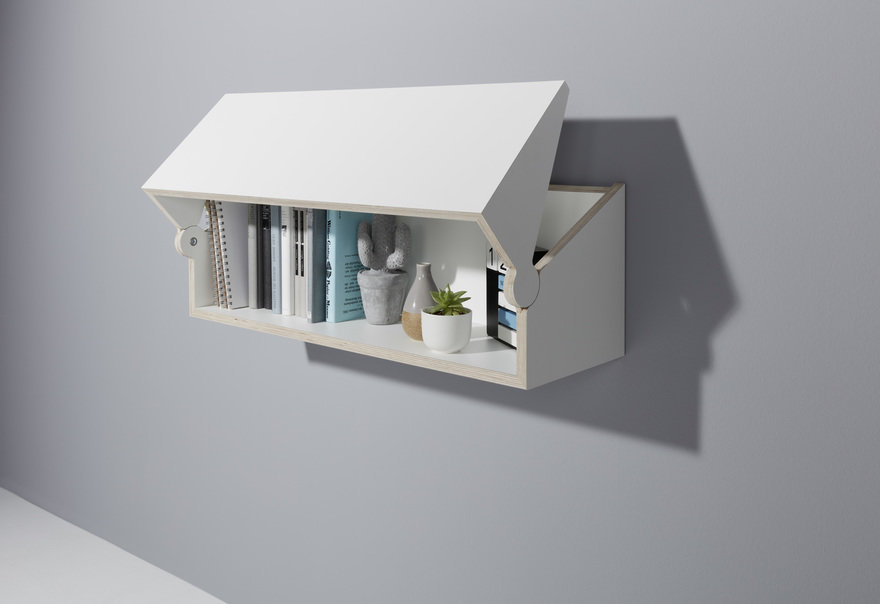 The shelf transforms into a desk that's a healthy 495mm deep 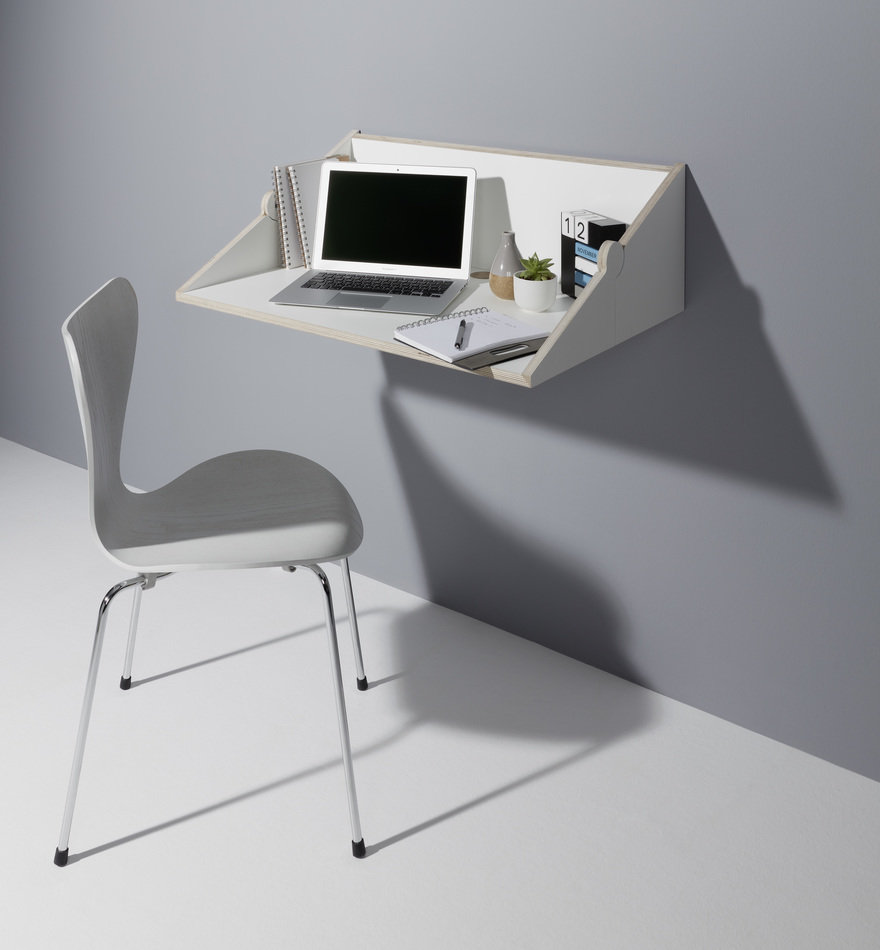 In fact, plenty of room for a messy workspace if you're not careful 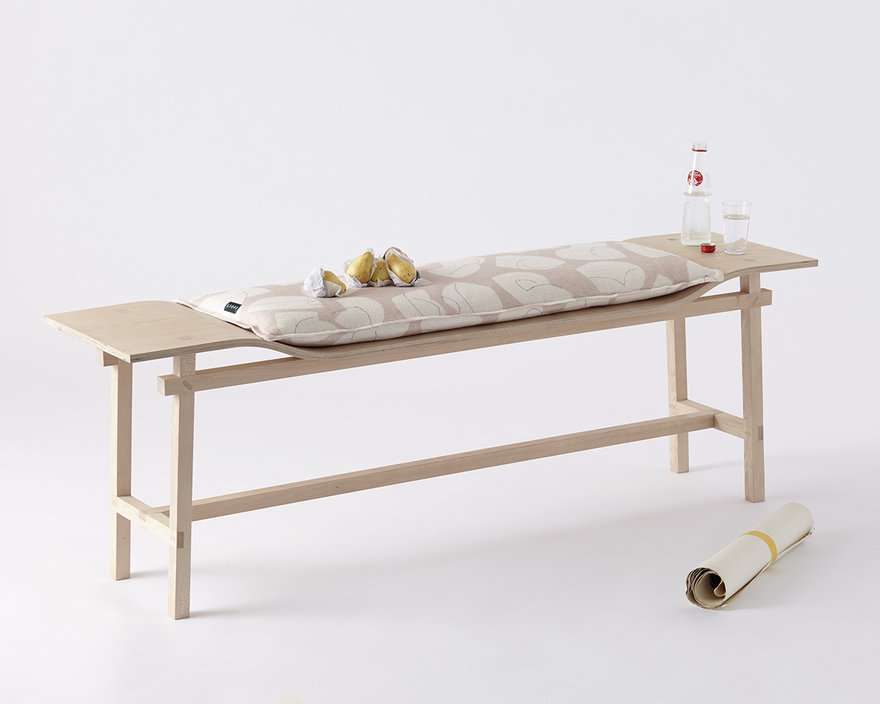 You can't beat a well designed curve. Particularly when its nesting a stellar cushion

Joyfully colliding textiles and furniture, Stoff Studios were selected to showcase some of their latest pieces at 100% Design as part of 100% Forward, which celebrates emerging talent. And rightly so, because design duo Carys Briggs, a textile designer, and furniture maker Andrew Mason have cooked up a beautiful collection of work. Their maple and birch plywood Bench with its soft curves and inset cushion is a particular favorite. 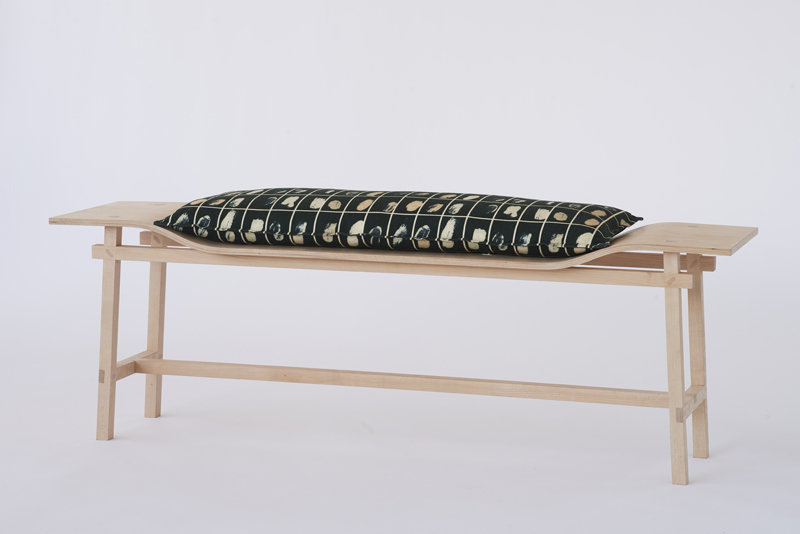 All the textiles are hand-printed by Carys 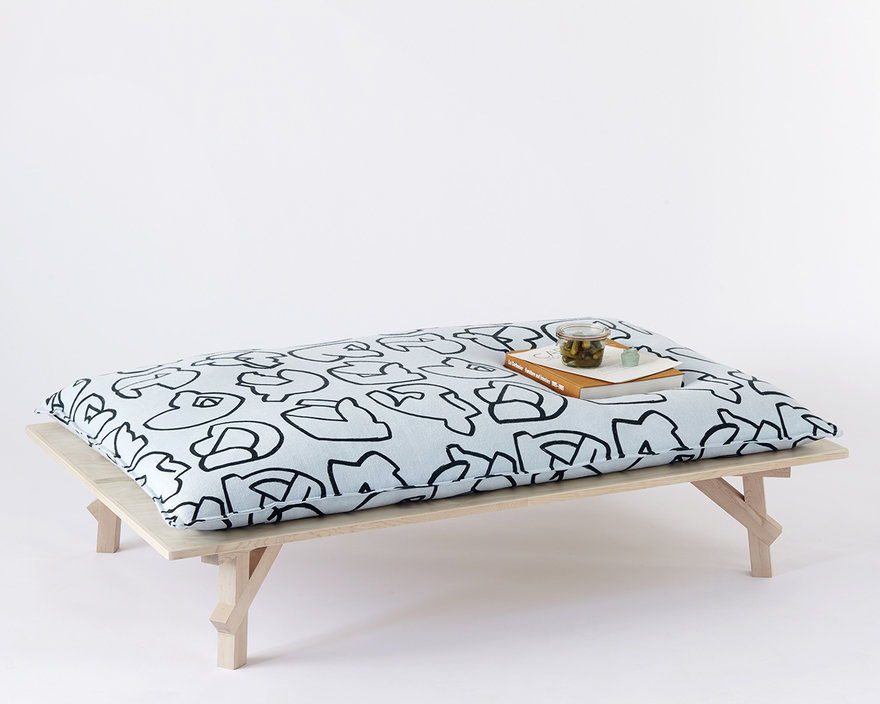 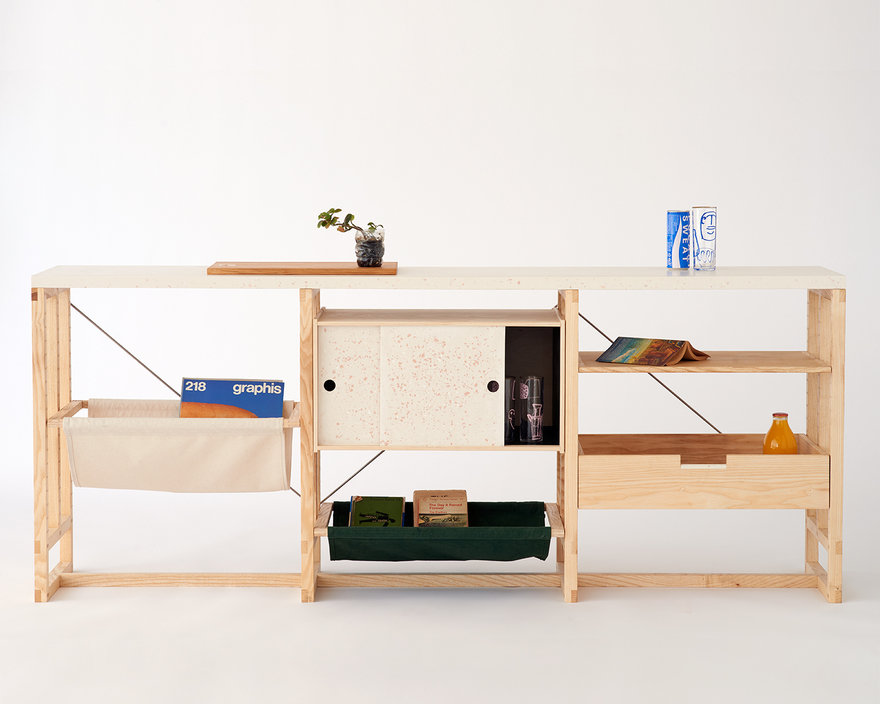 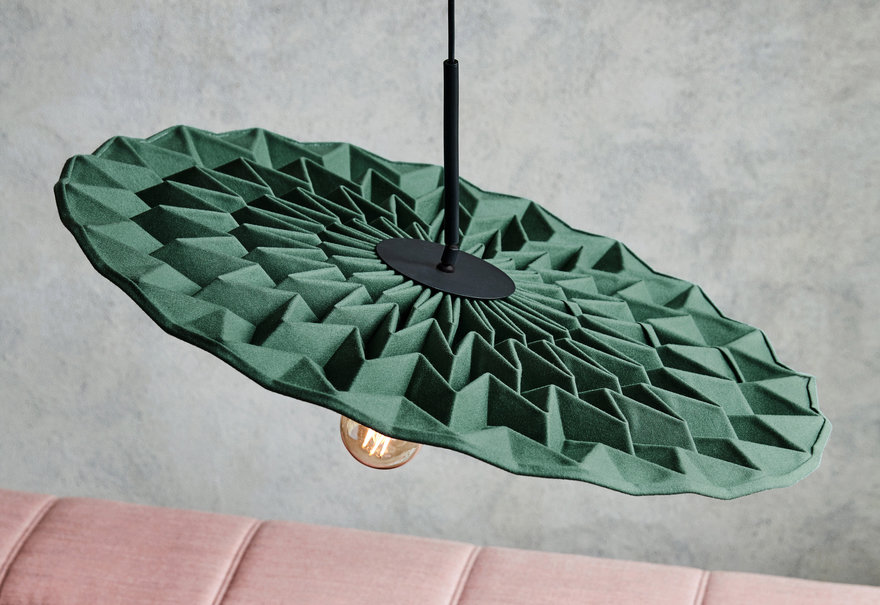 Fold is as easy on the ear as it is on the eye, with the ability to dampen ambient sound and absorb noise

Kyla McCallum's Fold Pendant makes it impossible not to be drawn into the light, because it's so ridiculously alluring. One of the most elegant and bewitching objects to make an appearance at the London Design Festival, its visual voodoo appears to the be channelling the spirits of ancient origami masters and otherworldly sheep. Made from hand-folded wool treated with a clever lamination process to give it rigidity, its fair to say Fold would light up any room… even when it's switched off. 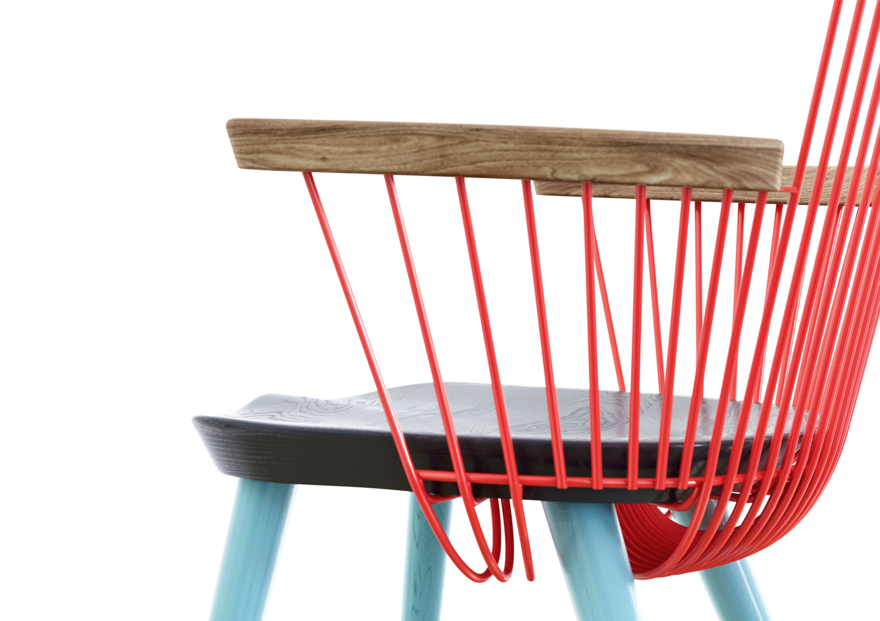 A tasty contemporary twist on the the traditional Windsor chair

A candy-fuelled neon spin on the classic Windsor chair, the WW Armchair is a delightful place to rest your derrière and can't help but bring a little smile. A design collaboration between Hayche and Brighton-based branding agency Studio Makgill, the wild wire-wrapped sides and back that swoop up in close formation from beneath the seat turn what could be just another Windsor chair into something a lot more special. The only problem is we now want to eat a bag of Twizzlers. 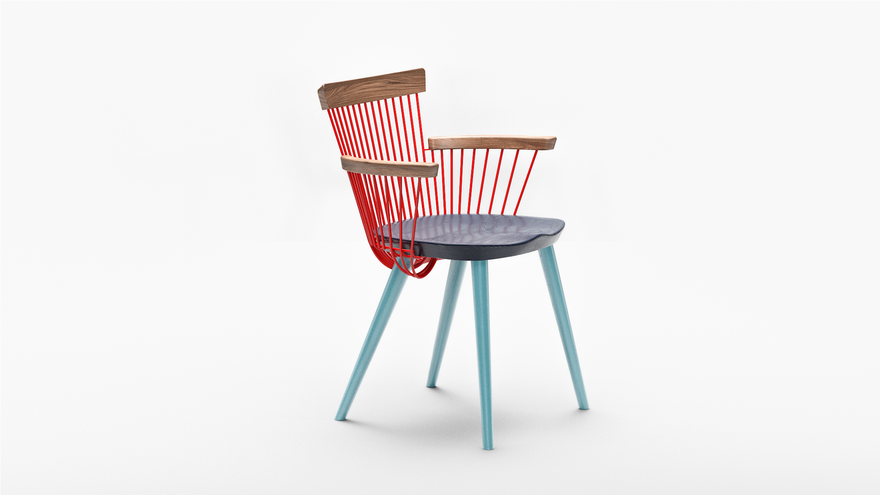 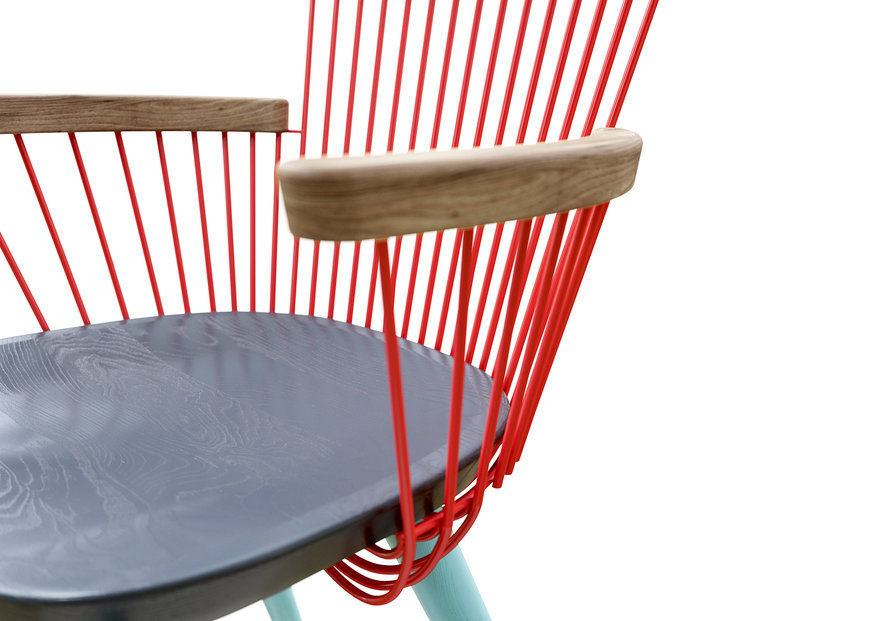 You're surrounded by 6mm powder-coated metal wire. Luckily not on all sides. 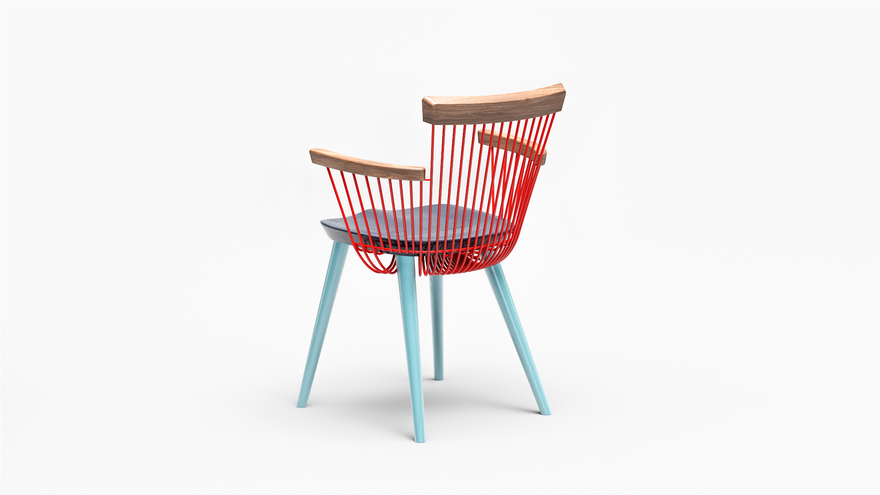 There are six color options to pick from