Each year, technology company Draper hosts an exhibition called Engineering Possibilities at their HQ in Cambridge, MA where some of their work is put on display for both industry professionals and the general public to see. Visitors are invited to participate in interactive demonstrations, including VR experiences, "drone" flying and more. The exhibit, this year called EP18, also offers a unique opportunity to directly engage with Draper engineers regarding breakthrough technologies that, if successful, will improve lives, change industries and push the boundaries of what is possible.

This year's theme prompted Draper scientists and engineers to dream up solutions that are able to operate under very challenging environments. One of Draper's missions for this year was to spread awareness of industrial design within the company, which is heavily dominated by scientists and engineers. To accomplish this mission, they worked closely with Boston-based industrial design studio Sprout Studios to design three products that are currently on display at the exhibition, which runs until October 6th.

The collaboration between Draper and Sprout Studios resulted in three very different project proposals—a sensor that is able to detect microplastics in the ocean, a device that speeds up the cell-based immunotherapy process, and a milk cooling system that operates using off-grid power sources. Each project aims to make a specific task easier and more streamlined, and they collectively offer a sneak peek into the future of technology.

An Aquatic Sensor that Detects and Analyzes Microplastics 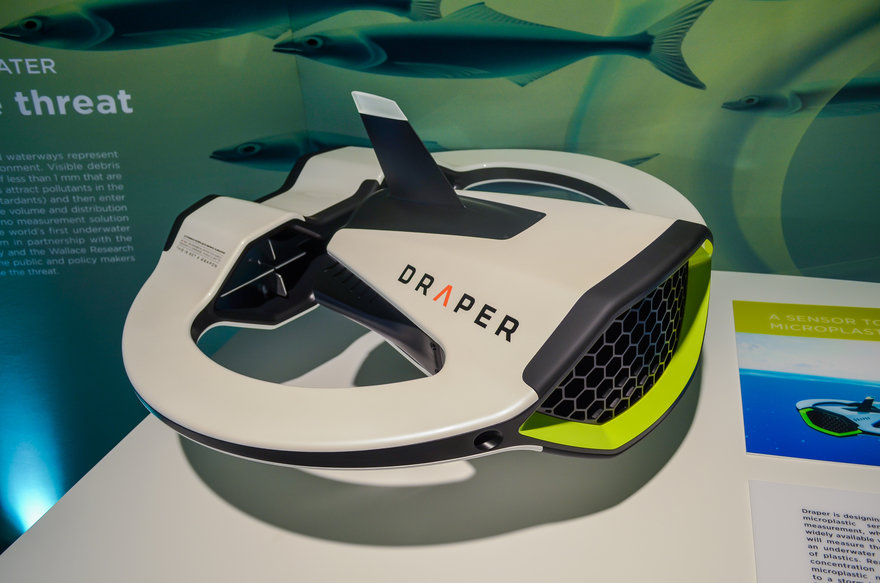 All images via Sprout Studios 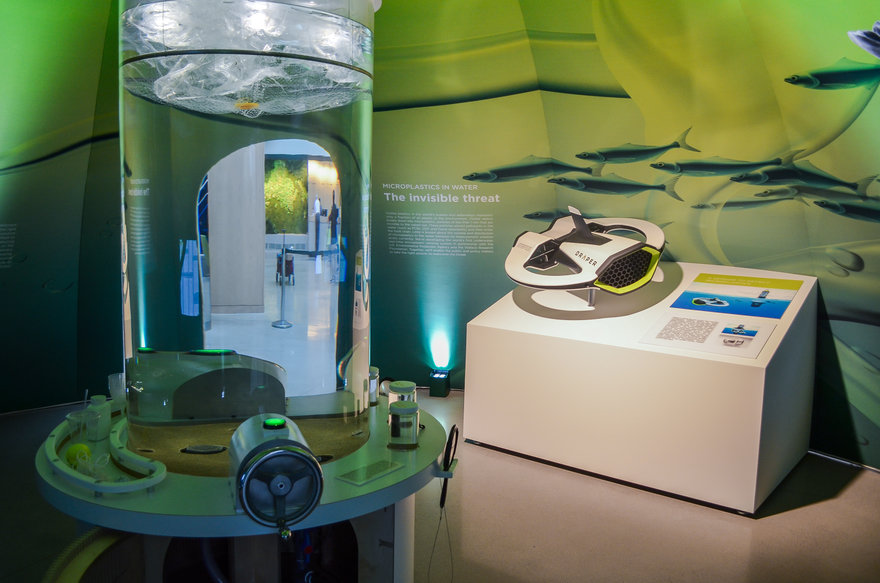 This interactive tank shows the difference between macroplastics and microplastics

Sprout Studios was asked to envision what the body of the sensor could look like. The goal would be to have a whole fleet of these sensors working at once with a single charging buoy nearby, equipped with satellite communications, to collect and share information. As the sensor moves through the ocean, it sucks up water and microplastics through the front, keeps the microplastics in that front body area and filters the water out through the propellors. 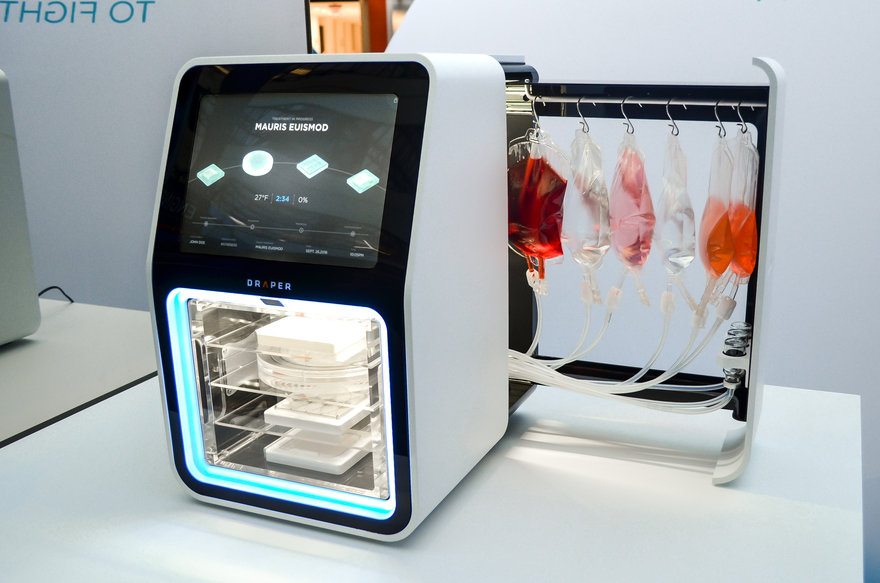 This compact medical device makes the cell-based immunotherapy process exponentially faster and more readily available to hospitals. Patients that need to be treated with cell-based immunotherapy are typically very at risk patients (think cancer or stem cell transplants) that need to be treated as quickly as possible. Unfortunately, the current treatment process requires cells to travel across the country multiple times since there's no one device that can handle all of the necessary steps. This type of transferring of the cells often results in more damaged cells, which certainly doesn't help the treatment process. 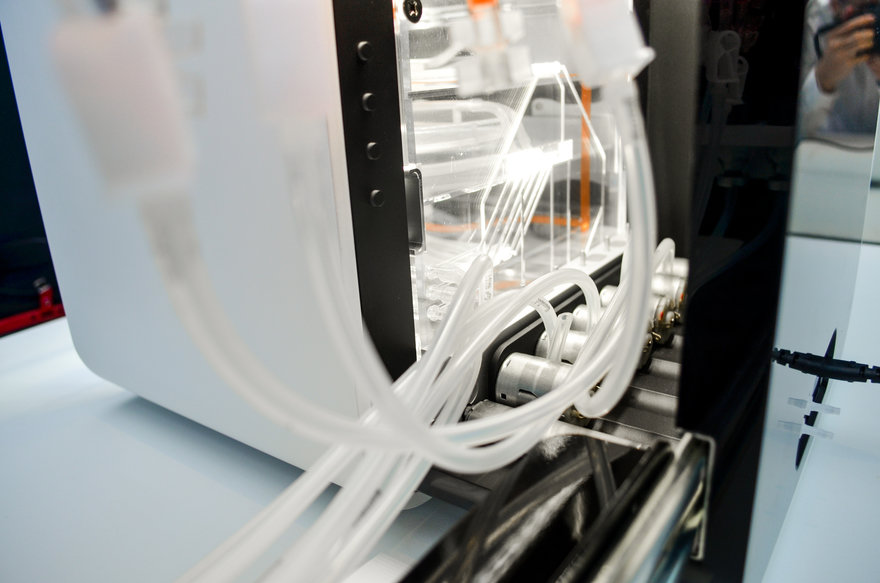 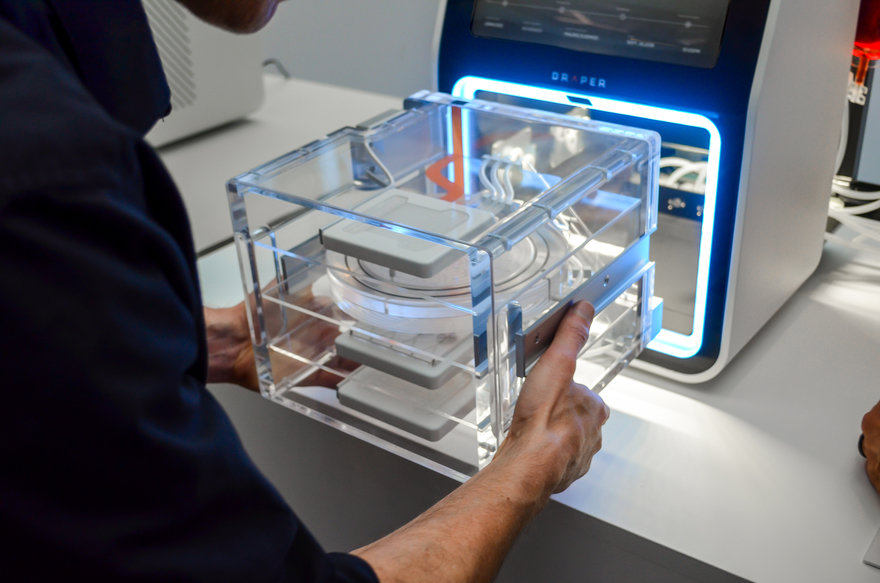 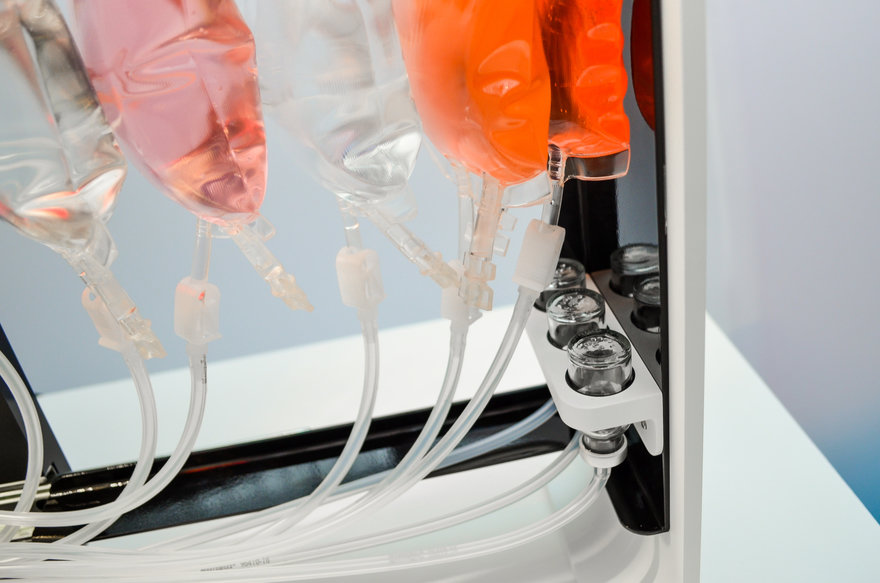 When designing this device, Draper provided Sprout with a list of requirements to ensure that all of the steps in the cell-based immunotherapy process would be taken into consideration. Draper designed all of the tech inside of the removable cartridge, and Sprout's job was to then find a way to house this tech. Sprout's team designed and prototyped the above option, which includes an insert housing a shelf for each step in the process. There's typically a ton of waste when using this process, but with this solution, only the removable cartridge will need to be replaced after each use. The science behind the device is extremely complex, so for EP18, Draper created a VR experience for attendees that walks you through the process from a cell's perspective. 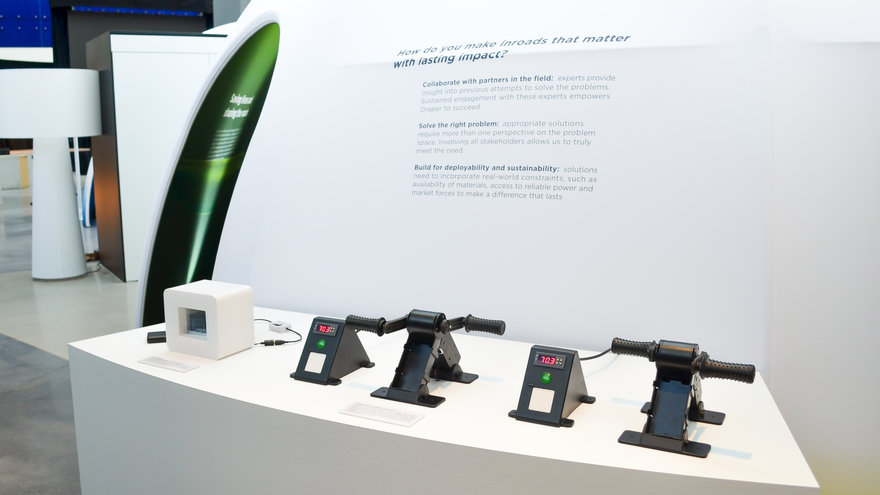 We often take our refrigerators for granted and forget they are a luxury. In many countries, lack of access to a power grid eliminates the option to keep perishables cool all-together. Draper recently developed cooling technology that is able to keep milk cool by running off of what is essentially the equivalent of a cellphone battery (which means it is able to run from off-grid power sources). Draper then brought Sprout Studios in to imagine what their dream project with the technology could look and act like. Sprout worked directly with Sheila Hemami, Draper's Director of Strategic Technical Opportunities, to figure out exactly what developing countries actually need. 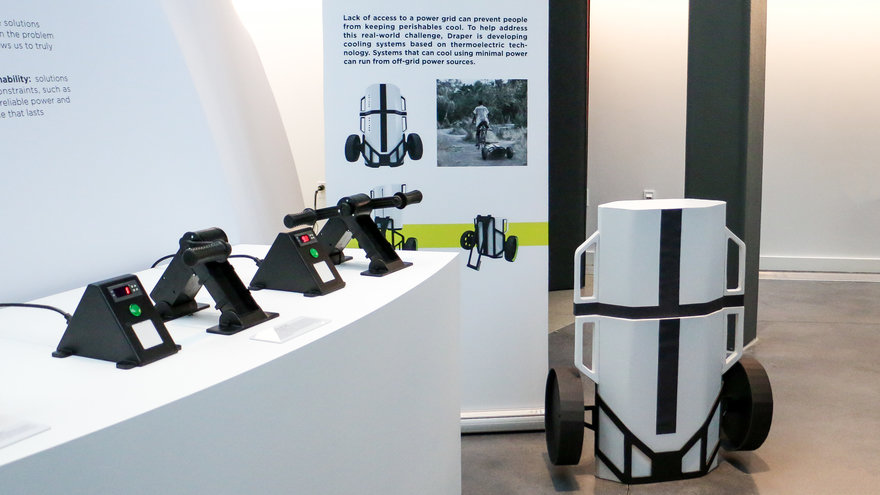 The outcome is the above mobile cooling system, which is designed specifically for dairy farmers that need to transport their milk long distances. The removable top unit is the actual cooling unit. Since water is a much more efficient heat transfer substance than air, this section uses both water and milk. By putting milk on one side and water on the other, the cooling technology is able to  strip out the heat from the milk and transfer it to the water, leaving just cool milk behind. The leftover water can be used for other purposes, such as cleaning.

See these projects and more in person at EP18! The exhibition is open to the public until tomorrow from 10 a.m. to 4 p.m. at 555 Technology Square in Cambridge, MA.