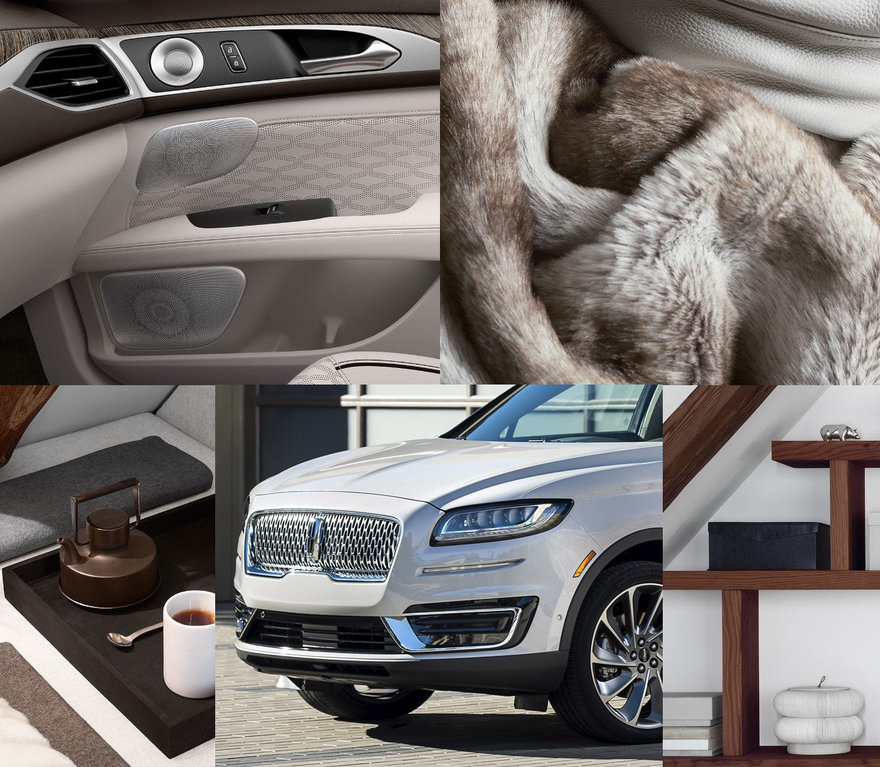 When car companies introduce new vehicles, they typically host media drives for journalists as a way to generate buzz and reviews in advance of dealership sales to the public. The majority of the time spent on these drive programs is experimental, mostly driving and eating (a lot of eating). Additionally, there's important informative talks by brand marketing representatives, engineers and designers which must be assimilated and committed to memory while being in a perpetual state of food coma. I particularly enjoy the vehicle walk-around talks done by the designers because I get to ask hyper-nerdy car design questions that generate glazed over looks on the rest of the journalists faces.

Lincoln recently hosted a launch program for the new 2019 Nautilus, their candidate in the extremely competitive and popular mid-size SUV category. One item on the agenda jumped out as being interesting from a design angle and uncharacteristic for an automotive media drive. It was a discussion between an artist Ruth Pastine and Marcia Salzberg, Senior Color and Materials Designer at Lincoln about how each other's work crosses over. The talk was held at the Porch Gallery in Ojai, California and included an exhibition of Pastine's work. 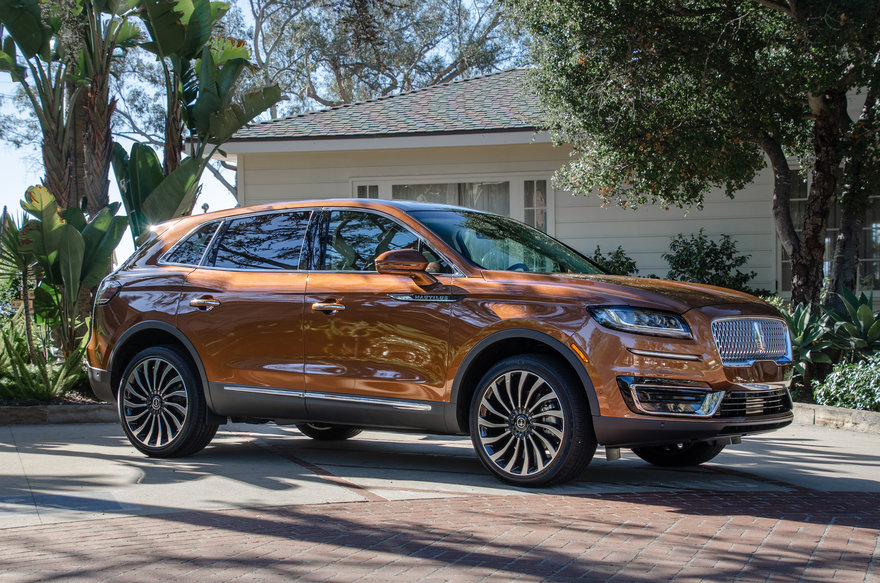 Ruth Pastine is an American color field painter based in Ojai. She describes the majority of her work as the exploration of color systems based on red/green, blue/orange and yellow/violet hue combinations. The pieces she creates are in two formats and mediums. Smaller works are created by "finger painting" ground pastels. Larger paintings are done by building up many layers of oil paint by hand with brushes. 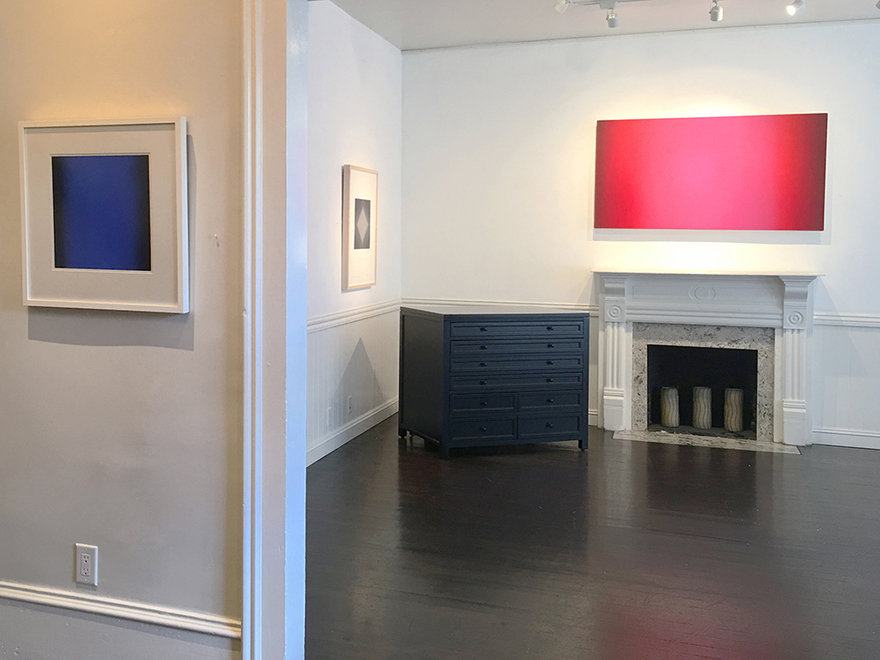 Pastine says the self imposed restrictions on colors, materials and scale introduce an element of scientific research and problem solving into her process. Using only two colors at a time might seem very limiting, but she's found that there's an infinite range of shades available to explore. She strives to achieve a chromatic glow from her work that often looks self illuminated. This is achieved with a critical focus on color saturation, value and complimentary pairings. 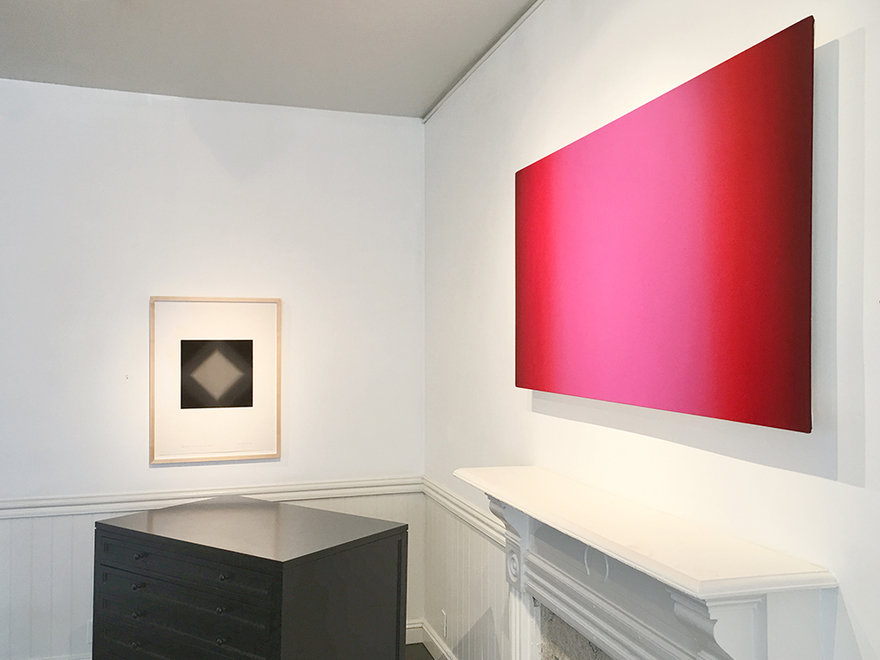 Paintings are typically created in a kind of production run process(not unlike the stages of vehicle design). Pastine said she works on multiple paintings at the same time and it can take between 4-12 months to arrived at a resolved state. While her paintings look simplistic at first glance, she said that each one is a "journey into the unknown" and the end result is sometimes completely different from where she started. To get the right emphasis of chromatic light means balancing that with a complimentary color in an interesting composition. This creates a kind of chromatic energy and tension and gives some pieces the illusion of being three dimensional. 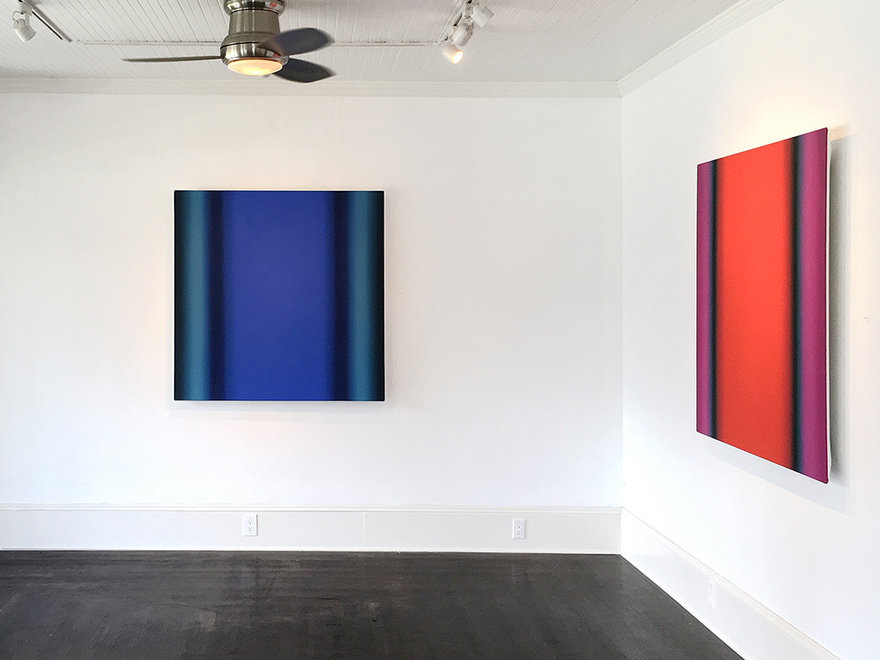 The way light interacts with Pastine's paintings and projects color into a space has influenced the way collectors are buying her work. She said these days, some people buying a new house or updating a room will begin with placing her painting in the space as a starting point for further furnishing selection. The color of the painting and its chromatic energy can bring a dramatic mood shift to a room.

Marcia Salzberg, Senior Color and Materials Designer at Lincoln commented on another spacial element of Pastine's work and her decision to present her paintings frameless. "I think the space you give the work to breathe is very important Salzberg said, keeping it modern and simple has a very long timeless aspect that really gives it the legs to stand the test of time." The sensitivity Pastine gives to space around her pieces is a similar characteristic Salzberg noted in the design of current Lincoln vehicles. "We consider our Lincoln environments a sanctuary. Even though we incorporate a lot of technology, it's really about enhancing your experience, evoking a positive feeling and making your journey as comfortable as possible without being cluttered."

Although Marcia Salzberg has worked at Lincoln (and parent company Ford) for 14+ years, she's an automotive outsider. Her background and prior career was as a fashion designer for 15 years in Los Angeles. Salzberg was used to the fast paced rigors of creating multiple fashion collections each year. Transitioning to automotive design meant adjusting to projects that took years to go into production. Much like Pastine's painting process, Salzburg described there's typically a color and materials concept for a vehicle followed by long periods of refinement. "It takes about 3-4 years for a vehicle to reach production. Ruth talked about her series paintings which she evolves over a span of time. It's similar with the color and materials on a vehicle. You'll start out with something and it'll have to go through testing. You might have to switch or you might not." 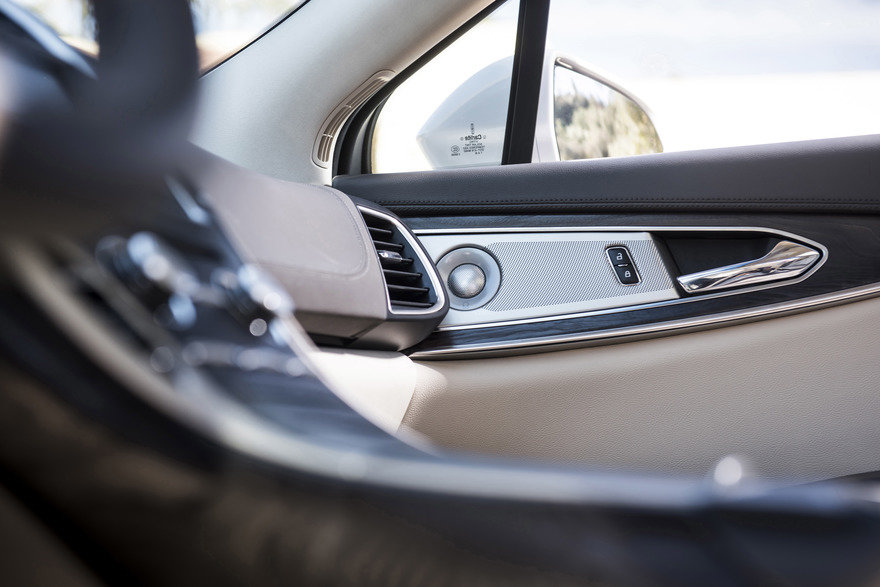 It seem's like a pretty simple task to select a few colors for a car interior, it's not as straight forward as Salzberg explains. "We have a full team that works on color and materials and we rely on rooms with special Macbeth lights. Whenever we say to a leather supplier for instance, this is the color we want, they'll bring in several submissions. We'll take the samples into the Macbeth rooms and we can review them under simulated daylight, twilight, which is a whole other cast, and sunrise. All our glass is tinted, that's another element we have to consider. So we have to deal with all these external factors for deciding on colors." 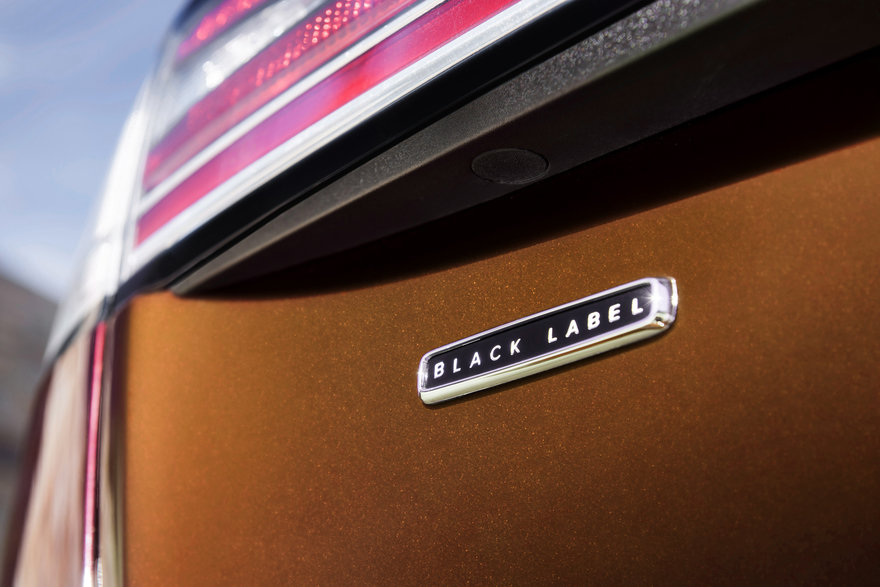 The new Nautilus, similar to all the other Lincoln models is available as a premium Black Label edition that includes special materials, features and services. To further separate the Black Label vehicles, they're designed around distinctive themes. "There's a story behind everything we choose. It's not as simple as this is a nice color of leather, we'll put it with that. Everything has to have such deep meaning and purpose as to why," Salzberg said. "That's how the Lincoln Black Label themes are curated. We have to develop a real moving, powerful story." 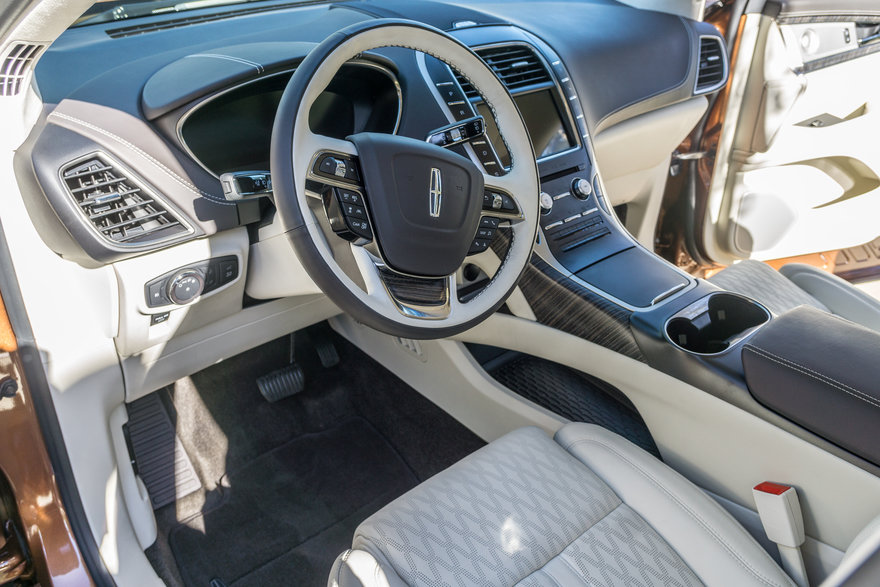 The Nautilus we test drove was trimmed in the newest Black Label theme called Chalet. "The Chalet theme is high contrast, we have the alpine white and we have the rich dark espresso", Salzberg described. We specifically chose that combination to reflect the idea of an alpine skiing vacation. You might be staying at a luxury ski resort and during the day you're out skiiing, it's white, pristine, cold and sparkling. Afterwards you're in the lodge enjoying the warm blankets and fireplace and sipping warm brandy or cognac or hot cocoa. So it was that contrast that really interested us." 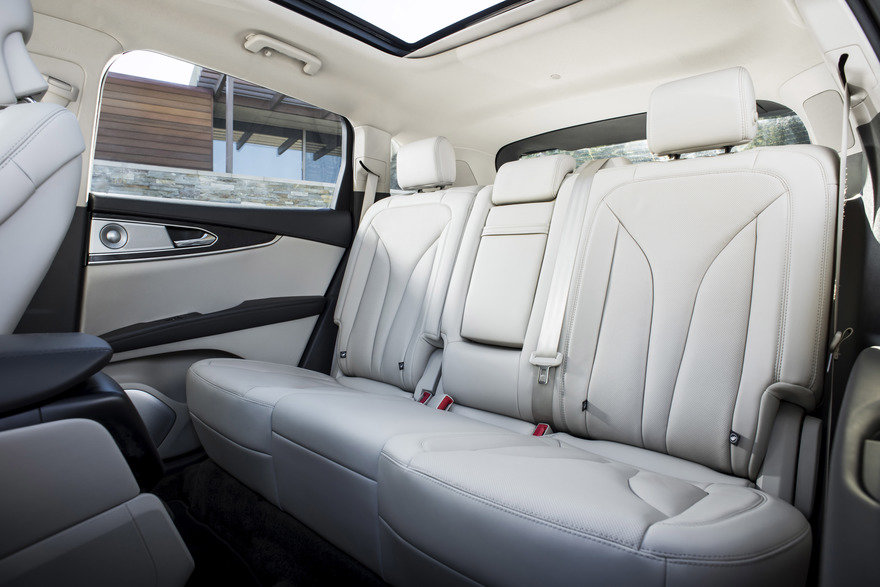 Deciding where to apply specific materials is often a balance of realizing the designer's vision with functional realities as Salzberg explains. "There's the Alcantara suede for the headliner which has a velvety soft feeling and also helps with noise and vibration reduction so the whole interior becomes this quiet sanctuary. As for the other finishes we like to use real wood veneer, those should be complimentary. We don't want anything to look dipped and flat so it's got to have movement and balance. As Ruth explained the importance of scale and proportion in her work, we also have to decide how much of a material to use and where. Are the seats in solid leather or do you treat bolsters and framing differently? For us there's lots of different degrees and combinations to create material breakups."

Once those material decisions are made, testing comes next and ironically for Salzberg, it's the fashion industry she's sometimes working against to get materials to pass. "Automotive has very strong regulations for dye transfer for example. People love light color interiors, they tend to perceive that as the most luxurious. But it's also the most challenging because of potential dye transfer from blue jeans for instance. We have robotic tests fitted with canvas butt forms that will do something like 75,000 passes taking two weeks to check for wear and color transfer on leather seats. So we go to great lengths to solve that issue without trying to change the feel and appearance of the leather." 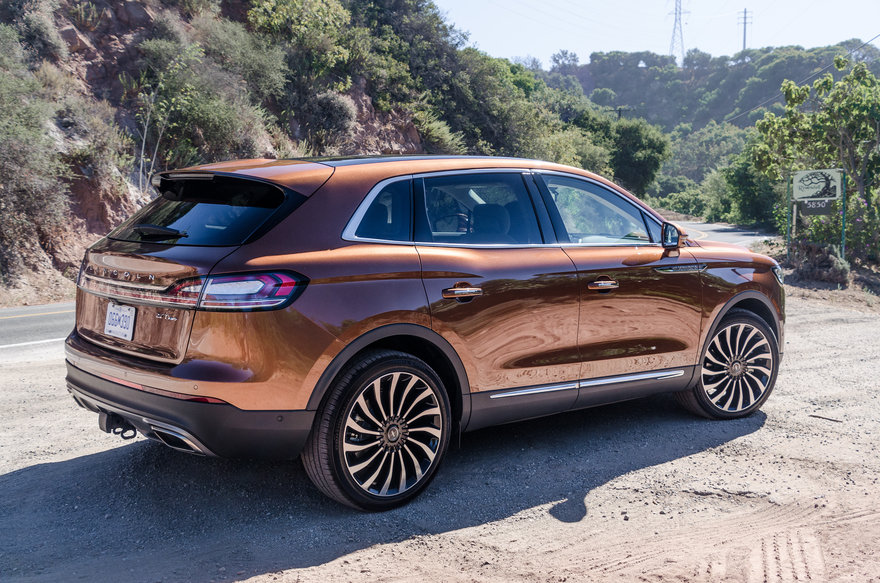 With all the added complexities associated with automotive design and manufacturing Salzberg said she's still able to rely on design fundamentals she's used since beginning her fashion career. "Coming out of the fashion industry, I could never imagine working in automotive. However, the similarities are amazing because they both involve personal style and expression choices. I think color is one of the main things that will attract you and contributes to what makes people buy one vehicle over another. It's relatable to artwork, it's a personal choice, it's what speaks to you and what you can identify with."

Disclaimer: Lincoln paid for all expenses for this trip including flights, hotels and meals.

New York based concept design specializing in retail and brand environments. Life long car geek and trained as a transportation designer, graduating from the Cleveland Institute of Art.