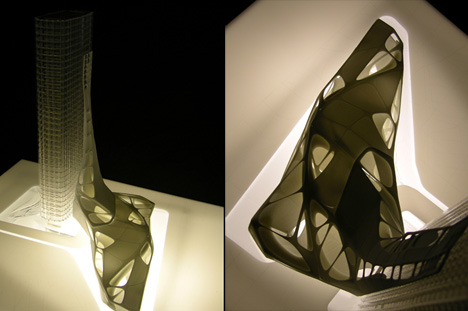 MRGD's algorithmic code-based formations research led to an actual architectural intervention at Centrepoint, an iconic 70's high-rise building in London. The design team observed the dynamic behavior of hair and used advanced modeling and animation software to simulate hair in an architectural context. The end result yielded a design tool capable of generating three-dimensional tessellation pattern of space. (Shown above is an SLS/rapid prototype model of the site proposal.)

The intention of the project is not a simple scaling up of a material system to the level of real structural components consisting of bundles of tubes of certain sizes. It is instead a sophisticated layered project with multiple systems and subsystems interacting in an organic way, and this is where the justification of beauty and elegance comes to fall.