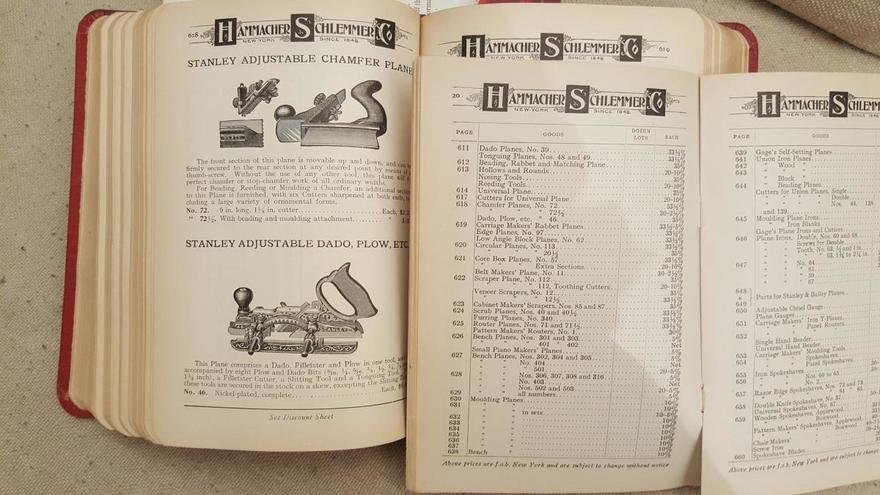 If the name Hammacher Schlemmer is known by the general public at all nowadays, it's as the very expensive seller of player pianos and other very expensive "lifestyle" curiosities. But the store's origins are as a large hardware store (based for a long time in New York City's Union Square area, at 4th Ave and 13th street, about 5 blocks from my apartment). Above is a picture of a page from the store's 1908 catalog. H&S not only sold tools directly, but it also distributed tools to many smaller stores. The catalog's page features some Stanley planes; the store's wholesale discount sheet, shown on the right side of the photo, shows that other store could buy the planes generally from anywhere from 25%-30% off. I am not sure what some of the discount ranges signify. (At the end of this post you'll see a picture of the front page of the discount sheet showing terms and conditions. The sheet is unique in my collection and generally rare. I found it in the front of the H&S catalog.)

This system made a lot of sense because the cost of shipping goods was huge. You needed to ship by sea or rail. Goods needed to be handled by many people, and the final wagon ride to the store - well, it made sense to group stuff together. Involving a distributor made a lot of sense because the distributor could organize an efficient shipment of lots of different things from different vendors for one store, rather than tiny shipments made onesy-twosey. Just having one representative travel around selling lots of different lines made sense because traveling by train or buggy miles just for an order of two boxes of screws was very wasteful.

Even after the introduction of trucks, the system kept going until the 1970's when the interstate highway system drastically lowered the cost of individual packages going long distances. Delivery companies like UPS and FedEx made direct shipment to the end customer (or store) commercially viable.

In 1978 Home Depot was founded. The company's their major brilliant innovation was buying directly from the factory. Essentially they could sell stuff far less expensively than a local hardware store could because they were paying distributor cost, not wholesale. Home Depot's competitive advantage of course led to the collapse of the local hardware store and gave Home Depot the power to lower costs even more by squeezing costs out of manufacturers, many of which decided to downgrade their quality for Home Depot goods or go overseas to lower costs.

Nevertheless many American manufacturers still insist on selling through distribution rather than directly. What this means of course is that even if you purchase something from the company website, the prices are included extra margin for the non-present distributor - or middleman.

What does this practically mean? American products from old-line companies are a lot more expensive than their newer, more streamlined competitors since the cost structure includes the middleman, even if the middleman serves no real purpose in the 21st century.

Backward thinking also affects investment in the means of production. Some old-line manufacturers are not willing to replace machinery that more or less works. When I worked at Black and Decker, it was nearly impossible to make quiet-to-specification gears on our old, worn-out, gear making machines. But we could not get approval to replace the machines because the cost of keeping the machines (zero) was far less than buying anything new, even though the product we produced had lower sales. The accounting perspective was that it only made sense to invest if you were building a new factory to expand something somewhere, not to upgrade a current profitable venture. Black and Decker instead bought an appliance company and eventually got out of the industrial power tool business that I was part of.

There are lots of reasons why American companies have trouble competing, but these are some of the big issues.

Why should you care?

A few months ago we got word the Baldor was dropping production of their top-end 6" grinder that we use for our custom grinders. It was expensive, too expensive, but worth it for those rock solid cast iron tool rests. But apparently for a big company like Baldor, the low volume wasn't enough to keep it going. That's a real shame. A little investment in machinery, a less expensive distribution system, and their grinders would be a lot more competitive in pricing. They would appeal not just to those who want the best, but also those who just want a great grinder. Note: the 8" grinder is still in production and lesser Baldor 6" grinders will still be sold (albeit not by us).

Over the years some of my favorite products have been discontinued by large American makers. The volume is just too small to interest them. Norton got rid of its Lilywhite stones for this reason. Now Baldor. There are other examples, but it's too depressing to think about. Every time I hear a story like this I tell my rep that if the company feels that the volume is too small for them, they should just sell the division to someone who wants it. These are still viable products. Heck, Unicomp, the company that made the fabulous M-Clicky keyboard for the original IBM PC's, still makes them as a niche business for people who want a great keyboard. I am very grateful. I have two - one PC, one Mac.

PS - we still have a few 6" custom grinders in stock, but even after we run out the store demo model, which is my own grinder, is staying with me for the rest of my life. 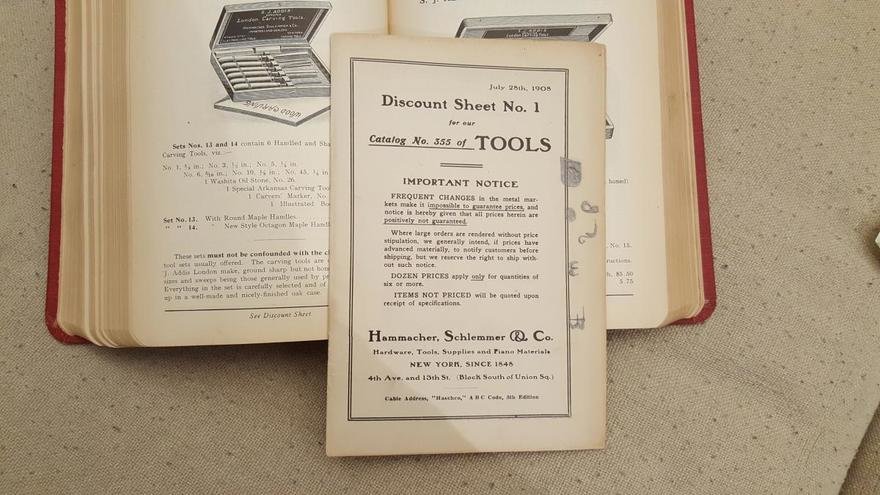