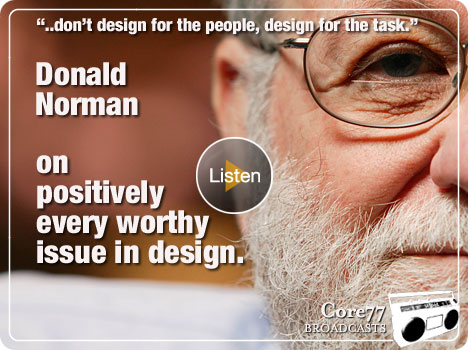 A fantastic holiday weekend treat! For those of you (very few) who may not already know, Don Norman's shining career began with a post at Harvard and then the University of California, San Diego, where his interests in psychology turned toward cognitive science. As one of the founders of that field, he eventually shifted his energies toward the relationship between user cognition and (computing) technology, which led to executive positions at Apple and Hewlett Packard.

Today he is co-founder and principal of the Nielson Norman Group, a executive consultancy for user-centered thinking; a Professor of Computer Science, Psychology, and Cognitive Science at Northwestern University; and co-director of Northwestern's Segal Design Institute (among too many other titles and activities to list). Importantly for design though, beyond his writing, he is trying to spread the word of design to our engineering and business brethren, so that they get how important design is, and so that we can work better together.

Bruce M. Tharp caught up with Don at the School of the Art Institute of Chicago's design center for a no-holds-barred chat. Don starts things off by criticizing the design of Bruce's voice recorder, talks about his just released book, what he's writing and thinking about now, the relationship between engineering and design, and much, much more!