When imagining the typical watch on the market today, the first image that conjures up (at least in my mind) is one with sub-dial overkill and too much clutter to highlight the single task watches are designed to do: tell us the time. In a digital age where smartphones have become an extension of our brains, stopwatches, timers, moon cycles and perpetual calendars are easier to access than ever—just ask Siri, Alexa or your favorite digital assistant what the date or time is, and she'll tell you that and more. So why do we still have watches? Well, they're sentimental wearables that have the ability to signify the wearer's current or aspirational state of being, they're of value, and there's nothing quite like holding your wrist up close to your face and saying, "hold on, let me check" when someone asks you for the time. 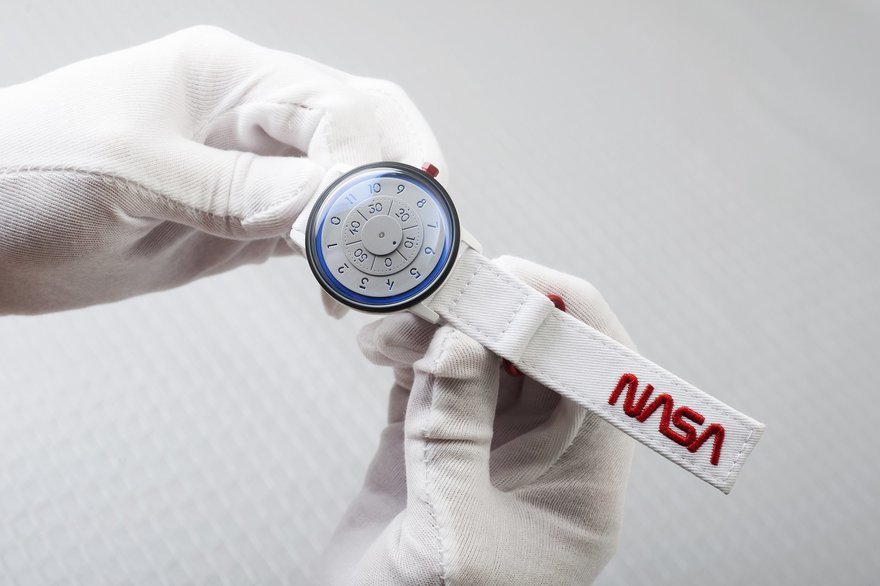 Watches are also design objects, which I was quickly and refreshingly reminded of after stumbling upon Hong Kong-based watch company Anicorn's website. Founder Joe Kwan naturally puts an emphasis on design based on his graphic design background, but accompanied by his innate sense of curiosity and an extreme drive, Kwan researched and asked the right questions to watch manufacturers in order to bring his company to life. Now, Anicorn is known for their strategic collaborations with companies and organizations like NASA, Daniel Arsham Studio, Highsnobiety and more—each one bringing a unique collaborative story to the table. Anicorn isn't necessarily the only company making well-designed watches, but they do it in a way that feels elevated and with purpose.

We sat down with Kwan to learn more about his decision to start Anicorn and what he found to be his most important skills going into the new endeavor:

Core77: What were you doing before starting Anicorn?

JK: I worked for several small graphic design studios in Hong Kong, working with some commercial clients and also some art and cultural commissions for around 6-7 years. I've spent a long time in the design industry but at the time could not feel any satisfaction due to the budget, crazy schedule (as you may know Hong Kong-ers work very fast) and lack of design freedom. I felt so lost with my career at that time. 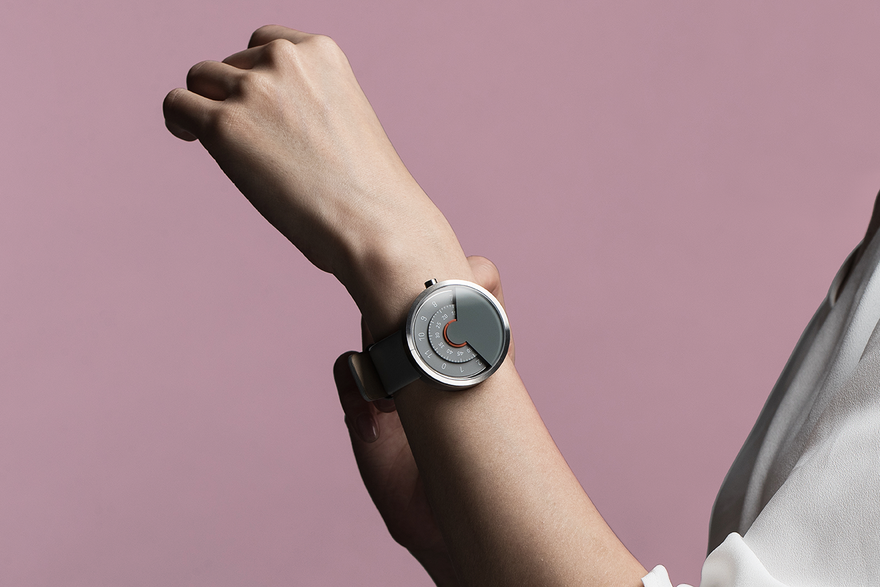 In 2014, there was a social movement (umbrella revolution) in Hong Kong to fight against the Chinese government and censorship. During that time, I felt I had to do something to change not only the political issue but also the things you really care about—the way you live and trying to survive in your own way. During that period I met my high school classmate, Chris, who is my business partner right now. He knew nothing about design (until now). He told me that he had some connections with some old Hong Kong watchmakers that were very skillful and intelligent. However, there is no platform for them since the watchmaking businesses was moved to mainland China from Hong Kong due to the economic crisis.

"[Asking for help] is like setting up a design brief—if people really understand what you need, they know how to help." 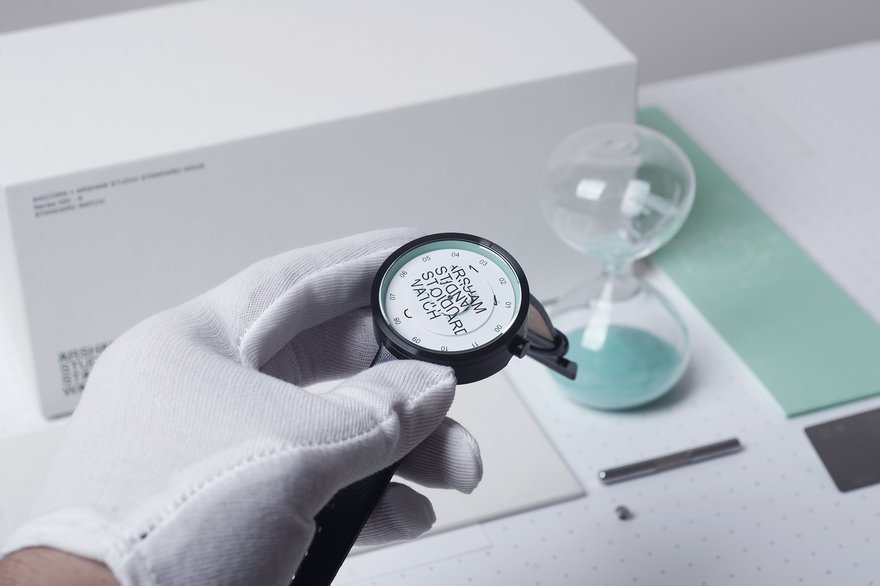 I thought it would be a great opportunity to combine my design knowledge with traditional watchmaking craftsmanship, to start a design brand with complicated mechanisms. It sounded cool! But the funny thing was that I didn't know anything about product design and the mechanical stuff...

So then what was that learning process like for you?

Yes, all designers know this quote, and it works for me. I think a designer's creative thinking can be applied to different aspects. Not only different design aspects, but you can also apply it to business development, and of course a physical watch. 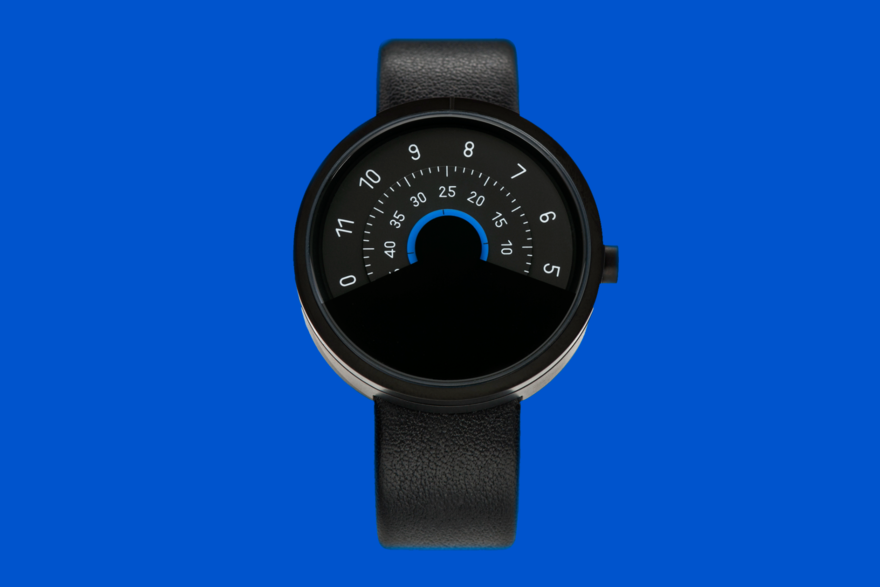 "Our design approach is not only designing the object, but we also create a whole story and scenario for each design."

The only way to learn is to talk to people. It's quite similar to talking with clients to understand their needs, but this time you need to talk to people about what you need. I talked to the watchmakers about my ideas and what I wanted to achieve, and they would let me know the practical ways to execute my ideas. It's more like setting up a design brief—if people really understand what you need, they know how to help.

How did you leverage your graphic design skillset to design watches? 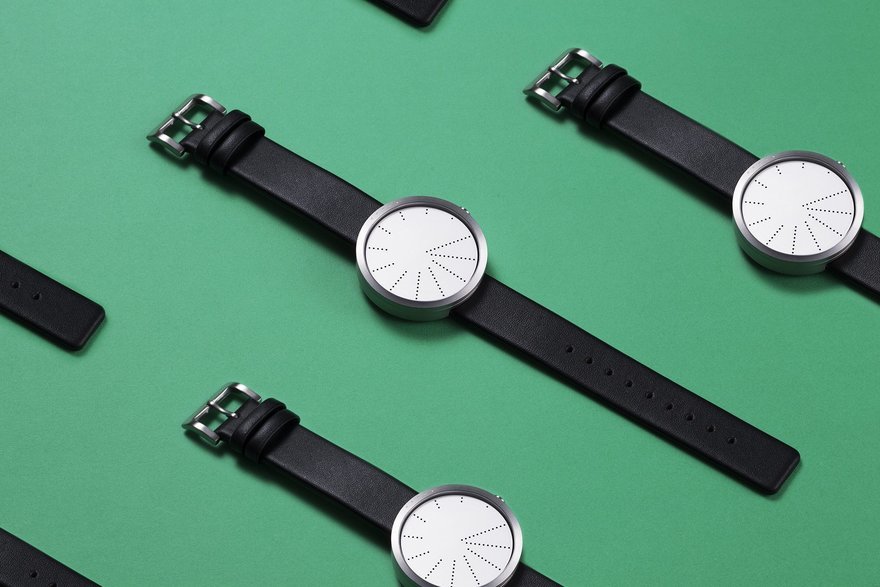 Watch faces are a very small area for designers to express their ideas. It's an advantage for me as a graphic designer because I know how to make good proportions, layouts, and most importantly—I know typefaces! There are so many watches on the market, but many of them underestimate the power and beauty of a good typeface. We work with type foundries that create beautiful numbers for us which you cannot find on the market. Maybe only design nerds care about this. Our design approach is not only designing the object, but we also create a whole story and scenario for each design.

Congrats on your first NASA watch selling out so quickly! How did the idea for this watch come about?

In 2016 we launched out K452 watch project on Kickstarter. The story was based on the discovery of an earth-like planet, Kepler 452. We were overwhelmed by the positive feedback from the crowdfunding community—people loved the design and the story. One day we received a message from a backer who worked at the NASA Kennedy center, and he was actually the director of the Kepler project. Since then, I had the idea on my mind that it would be awesome to collaborate with NASA to work on a special model of the K452 watch. 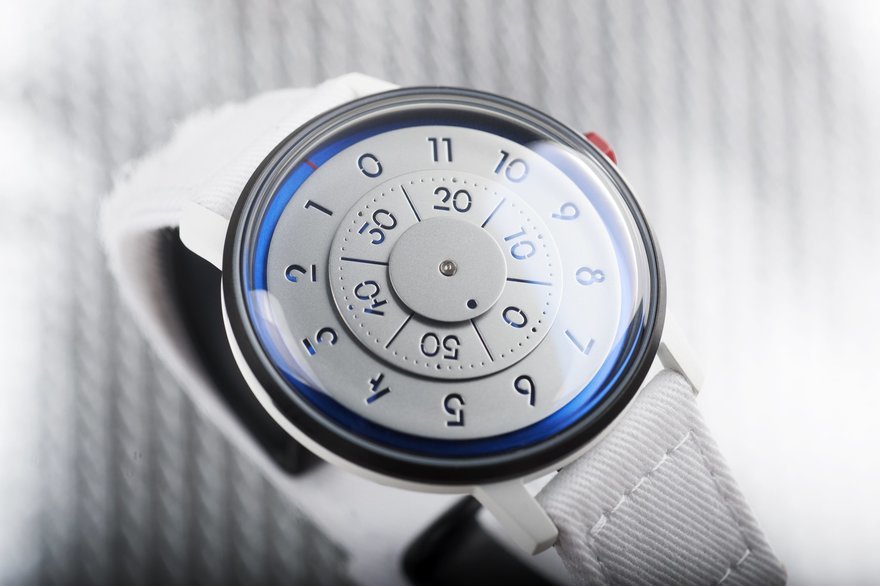 In September 2018, I found out that October was the 60th anniversary of NASA. I submitted my design to NASA, and they simply approved it! Then we sent the design to production and finished the whole project in one month. We launched the watch in October and sold out in 60 seconds.

What special design considerations did you need to make when designing a NASA inspired watch?

My friend Hamish Smyth and Jesse Reed published the NASA Graphics Standards Manual few years ago. Basically, I understood all the restrictions and design elements from this book.

You recently launched a new NASA watch that also sold out very quickly. What was the inspiration behind this version, and what made it different than your previous NASA watch? 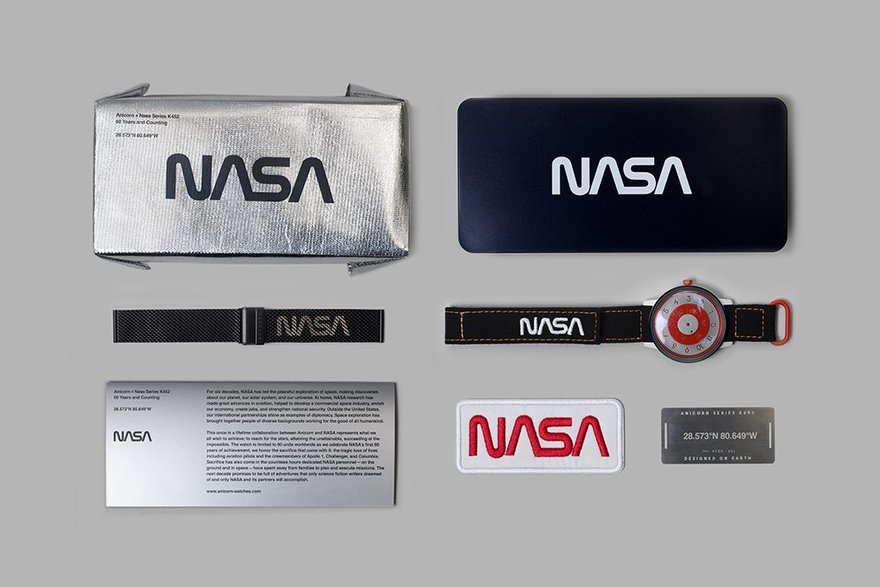 The first NASA watch design was based on The Extravehicular Mobility Unit (EMU), and the latest one as based on the Advanced Crew Escape Suit (ACES). Astronauts have used many different spacesuits during NASA's history. Different spacesuits fulfill different purposes for each mission. I like the color combination of NASA's different spacesuits—they are so fashionable and contemporary, it's so nice to immerse their design elements into a timepiece. 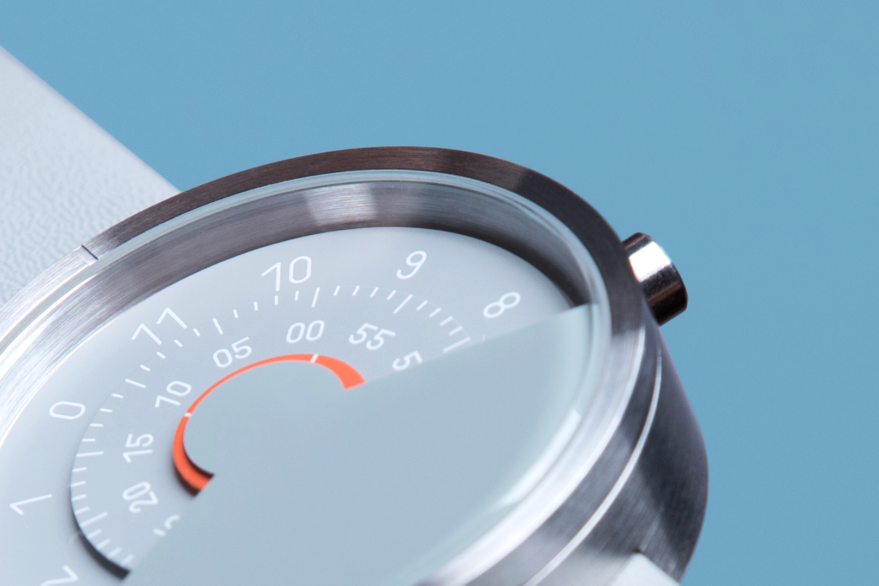 Our collaborations typically begin with a casual Instagram message or email. Normally I just simply show them what I've done over the past few years.
We seldom talk about terms and conditions during the first stage. The more important thing is that both parties think the project is interesting and that the brand position matches. I always look for collaborators who specialize in a particular creative industry and have a strong identity, no matter if they're in fashion, art, music, or design. 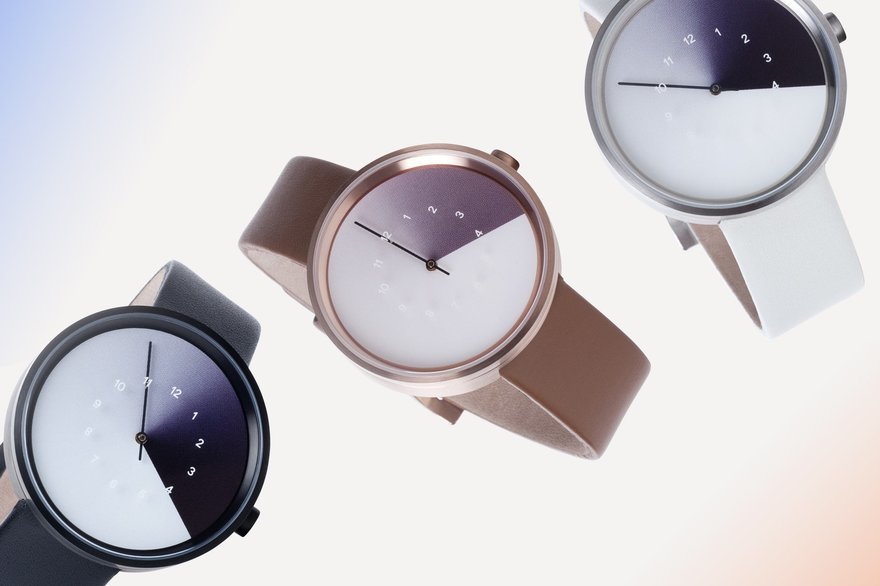 Is there any company or designer that you dream to collaborate with in the future?

M/M Paris, yes we are working on it!

Teenage Engineering, yes we are working on it as well!

Tadao Ando, my favorite architect, would be cool to work with. And also Nintendo, a company that shaped my childhood—it would be nice to design a watch based on their console design.