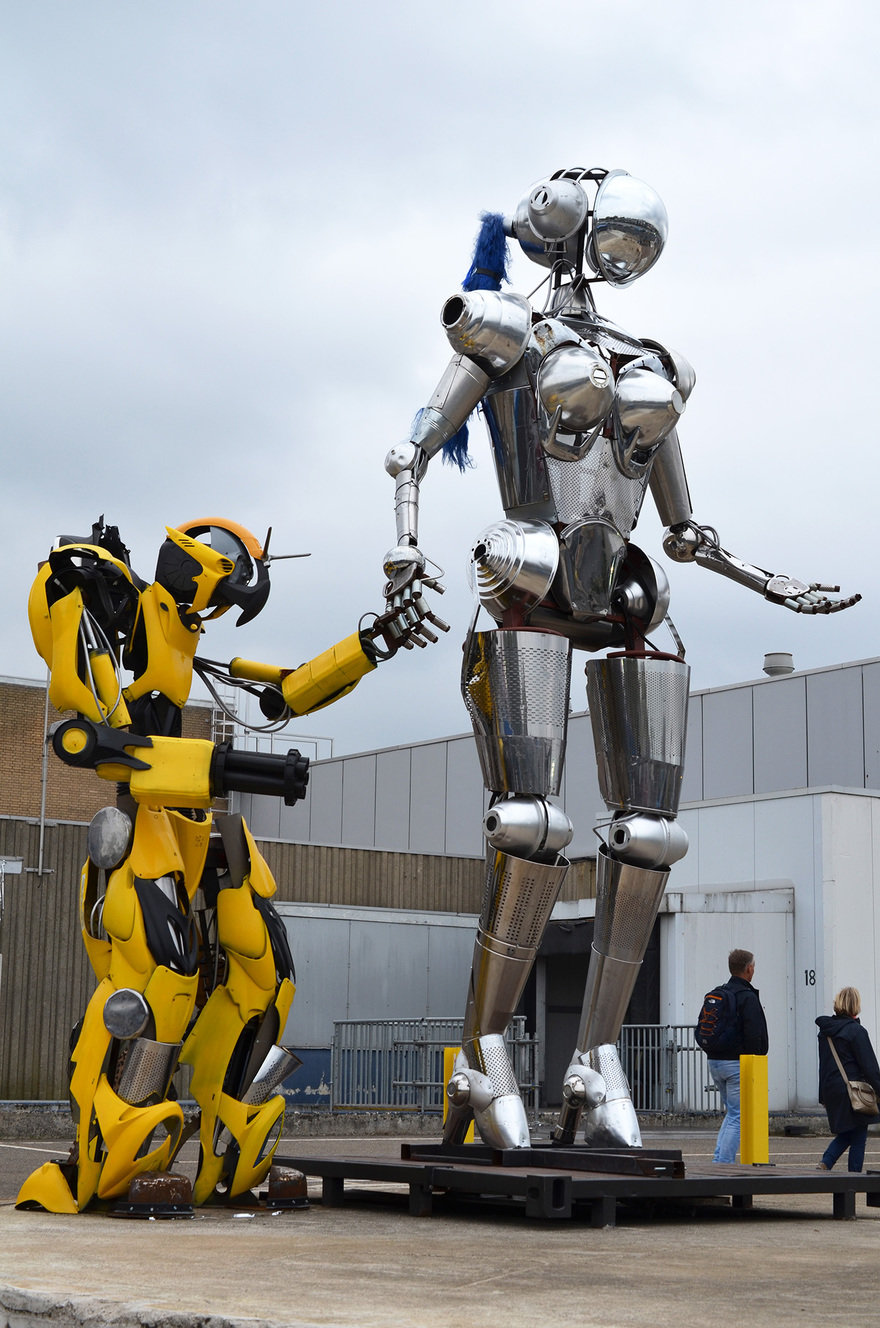 The Robot Love exhibition was one of this year's visitor magnets at Dutch Design Week, located at a historical factory for dairy production (Campina). The factory was closed down three years ago and is now establishing itself as Eindhoven's newest cultural hotspot. The industrial architecture and raw aesthetics made it a perfect location for bringing a large audience of humans in close(r) touch with robots.

"Can we teach robots how to love, and what can humans learn from them?"

Contributions from over 50 artists are exploring the emotional bond between humans and robots. Robots and artificial intelligence (AI) are seen as newcomers that need to learn and be educated. Unlike a robotics tech-show, this exhibition is clear call for mutual attention, care and love.

At the factory's entrance, we walked by a large-scale robotic mother and child who seemed to share our curiosity for the exhibition. Read on for a few more of our favorite discoveries at Robot Love. 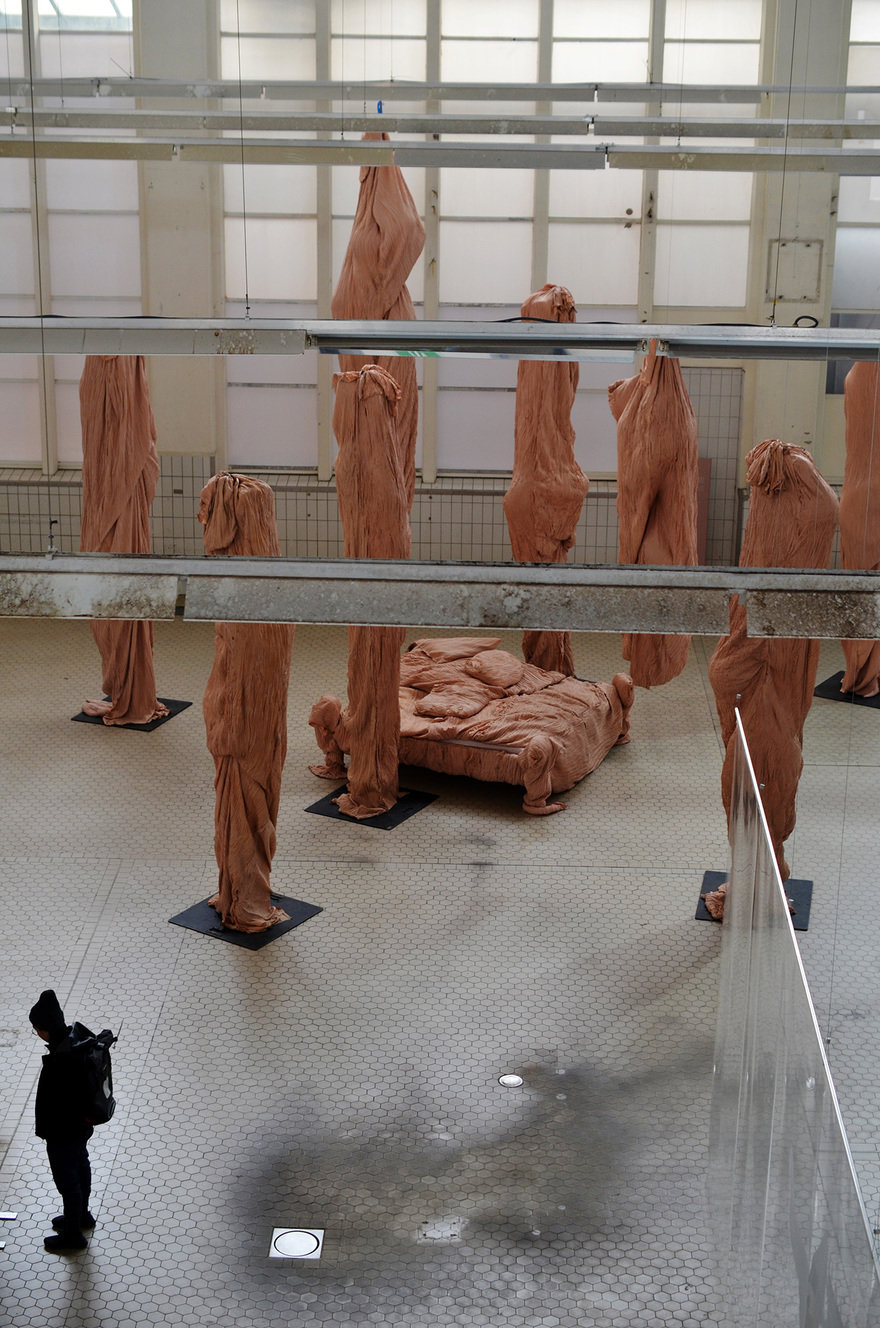 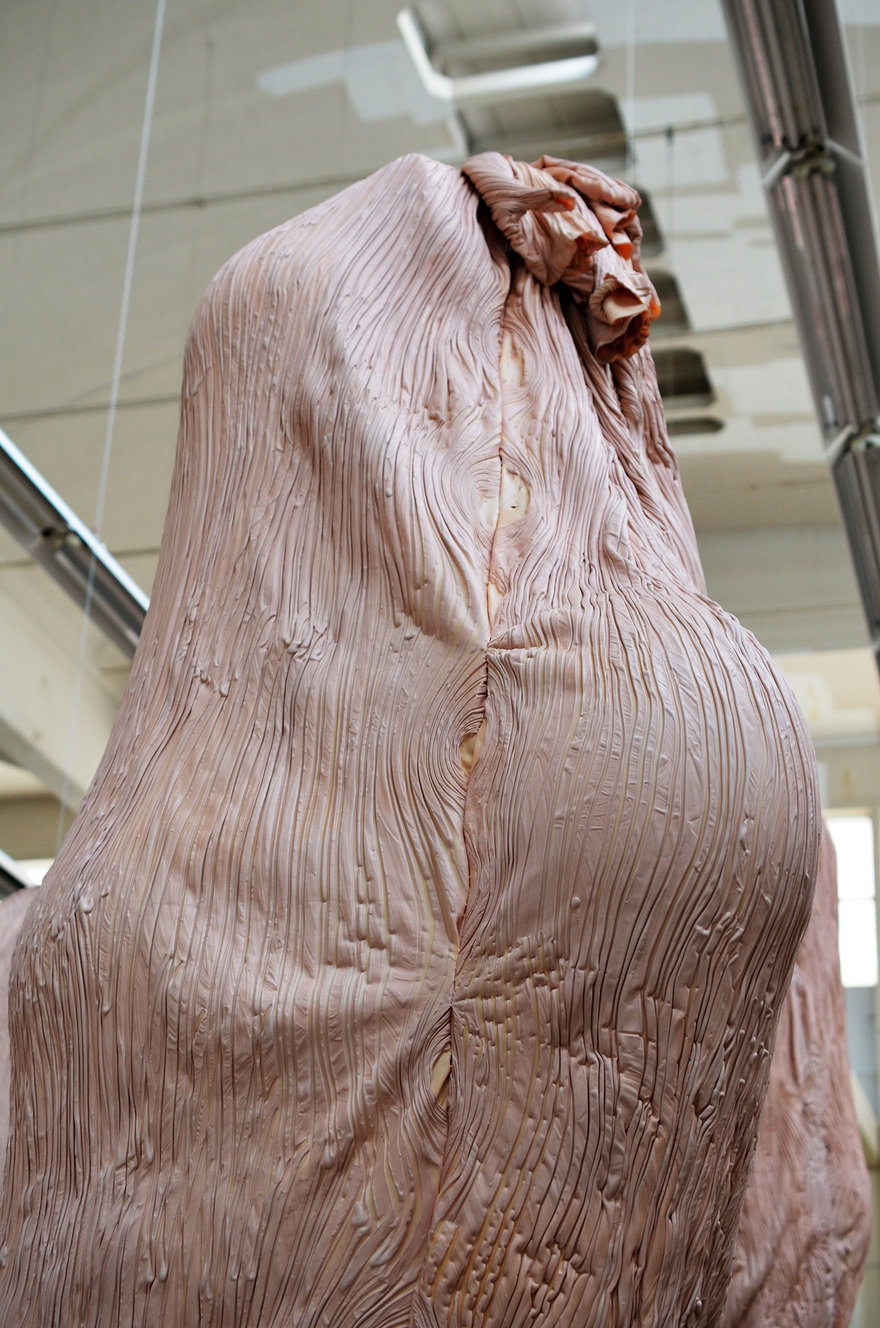 This is not what you would typically expect when entering a robot exhibition. In the center of the big factory hall, Grotto, formed by enormous latex pillars, demonstrates an extreme robot physicality.

Dutch designer Bart Hess created this piece back in 2015, and it is probably one of the largest pieces in his explorations on materials in relation to the human body. The Grotto installation raises questions about the materialization of robots. Why is the prevailing image of robots still that of smooth and cold machines resembling people?

We spent some time waiting for any motion within the installation but soon realized that these anonymous columns of wrinkled skin were here to stay.

The Waiting and The Tourist 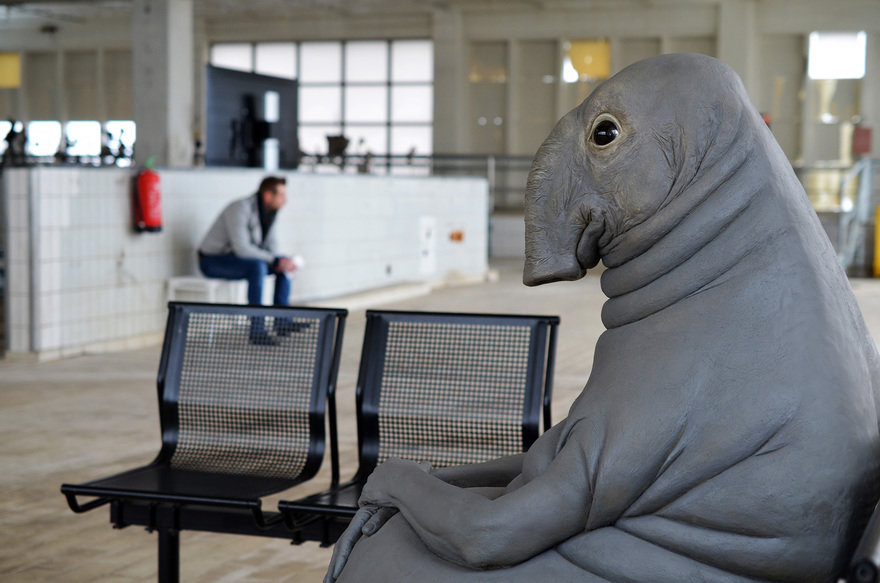 The Waiting by Margriet van Breevoort

When we walked by this humanoid walrus waiting on a bench, we were not sure whether it wound start moving. The hybrid sculptures by Dutch artists Margriet van Breevoort are so hyper-realistic that they alienated completely situations like waiting on a bench. We took this photo carefully to avoid interrupting the walrus that starred into the distance waiting for something, someone. Perhaps for another creature joining the bench? 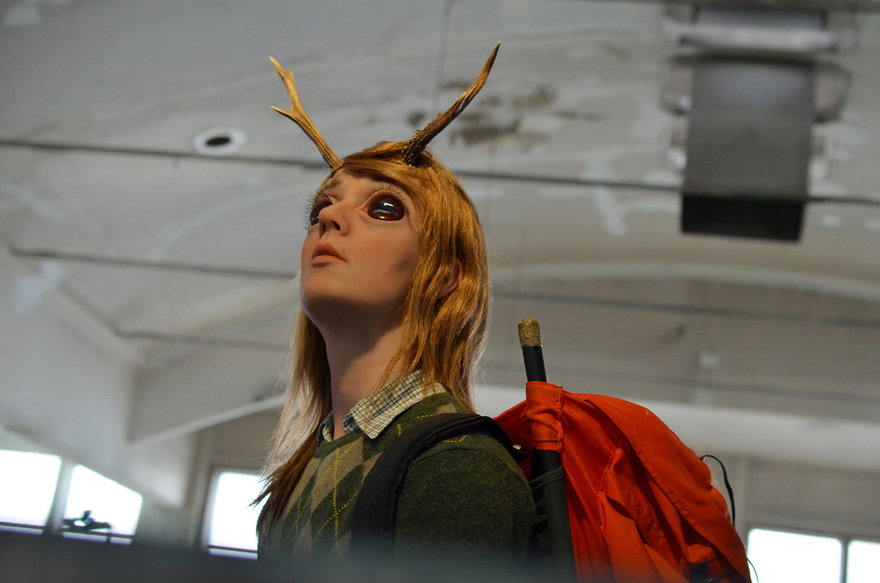 The Tourist by Margriet van Breevoort

With her sculptures, Margriet seduces us to believe in something impossible. Later on we looked into the eyes of The Tourist, which seems to be a traveler from a distant world, lost in the here and now. Where does this tourist come from, and to what world does he or she belong?

Extract from The Kitty AI : Artificial Intelligence for Governance

Pinar Yoldas is known for her futuristic projects at the intersection of art and science. In her latest video work titled "Artificial Intelligence for Governance" we arrived in 2039 where a 3D-animated cat had taken over the world. The Kitty AI spoke about the past crises that could not be solved by our politicians, such as refugee policies and climate change issues.

The adorable cat seemed harmless, but once it explains the inability of humankind to manage the complex issues of our planet—and why she had to become the first non-human governor—this kitten is more serious than ever. 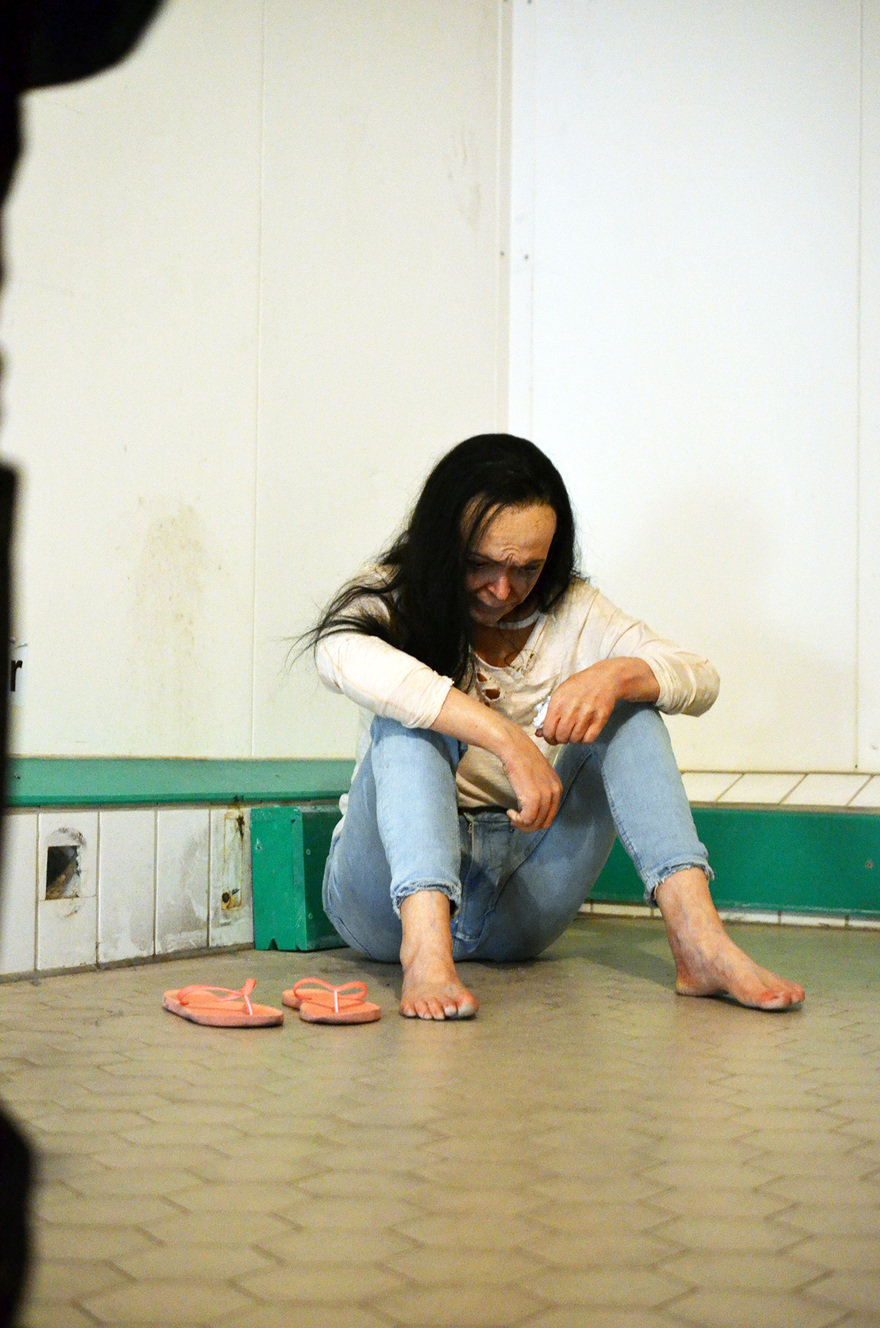 Annelies. The android robotic sister of Angelique and Liesbeth. 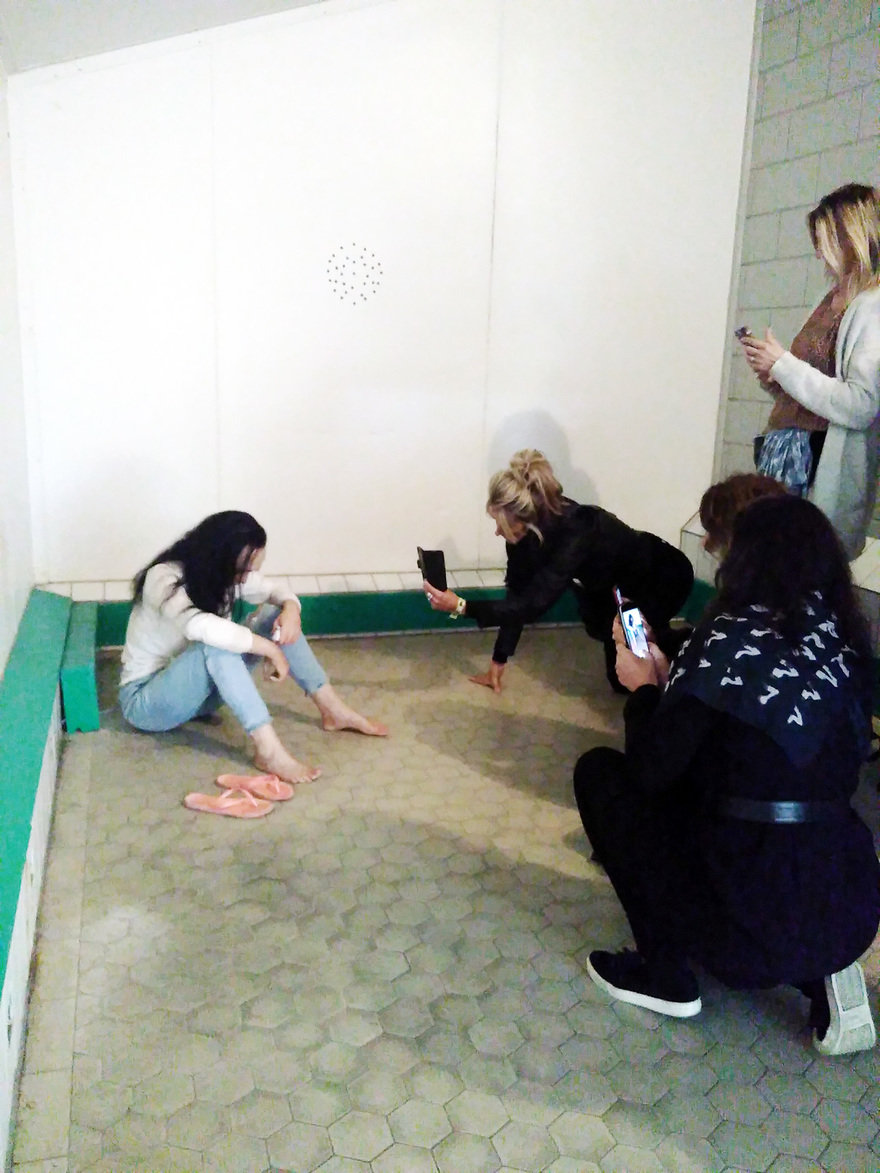 Annelies. The android robotic sister of Angelique and Liesbeth

Who is this crying woman in the corner? At first we were surprised to see people taking pictures instead of helping her, but we soon realized that this was an android. Annelies is a robotic clone that looks exactly like Angelique and Liesbeth Raeven, better known as the artist duo L.A. Raeven. The identical twins are known for celebrating their symbiotic relationship through artistic performances.

Their android robotic sister cried in the corner and demonstrated the lonely feeling of being incomplete without the other(s). She responded when people got close to her and looked up when being touched—but her silent crying never stopped. She was an impressive example of how pure electronics and a silicone skin is able to make people feel emotions and transmit the feeling of loneliness. View a video here. 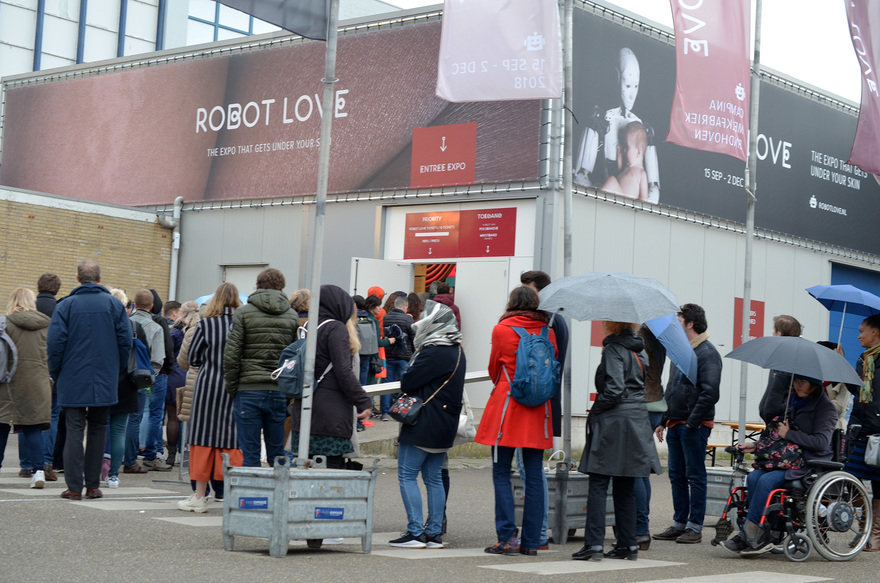 During the Dutch Design Week, the daily queues demonstrate the curiosity and endurance (and love?) of the visitors

The Robot Love exhibition is realized by Ine Gevers and the Niet Normaal Foundation. The goal of the exhibition is to create awareness and get people out of their comfort zones in a positive way. The diversity of the exhibits and surprising approach to robotics and artificial intelligence made us see things differently and question today's status quo.

Robot Love is still on show until 2 December 2018 at the (ex) Campina factory site. There is also a book publication of the exhibition. For more information and bookings please visit www.robotlove.nl