Buying a sharp tool is actually a relatively new idea 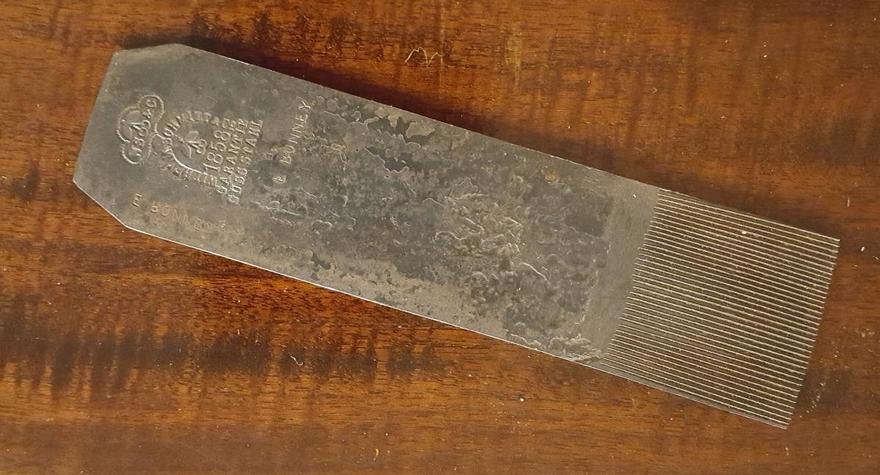 When you purchase an edge tool (plane, chisel, knife, carving tool, etc.), it will either have a "Factory Edge" or be described as "Sharp and ready to use." The idea of having a ready-to-use status is a comparatively new idea in tool marketing. Up until fairly recently - let's say 1960 - it was generally understood that most of the customers of tools were craftsmen who understood that even a new and sharpened tool would, after a few minutes work, require resharpening again. So why spend more initially for a temporary fix? But even more importantly, people have different preferences how a tool should be sharpened. Joseph Moxon (1678) writes in Mechanick Exercises about buying a saw:

"When Workman Light of a good Blade thus qualified [previously described], they matter not much whether the Teeth be sharp or deep, or set to their mind; For to make them so, is a Task they take to Themselves: And thus they perform it: [text goes on to write about saw sharpening]

I have a fair number of older tools whose cutting edges came with rough grind marks. These days, however, it is rare to see that. Most tools of any quality that are stocked by any dealer might not be ready to use, but they have at least a respectable "factory edge." The backs should be decent, the bevel ground to a good finish, and in theory the tool might even work, albeit perhaps inefficiently, out of the box. Carving tools are the exception. Most modern carving tool companies really intend for their tools to be usable right away. Ashley Iles tools, one of the first companies to offer sharp tools, deliver decent sharpness. Certainly the tools are sharp enough to get started and at least see if you like the way the tool feels in the hand. You can actually carve with the tools, but as you get more experienced, you will realize that the tools aren't as sharp as they can be, and the bevels are a little steep for some tastes. Flexcut - which we also stock in a limited number of tools, come sharp and ready to use.

Ray Iles's mortise chisels are not intentionally sharp and ready to use, but the factory edge is reasonable. Considering mortise chisel work without a superb edge, they work reasonably well straight out of the box.

Japanese tools as a group are now almost universally sold with a decent factory edge. This is also pretty new. Traditionally in Japan, one would purchase the tools from the toolmaker, ground only and without a handle. You would either take them to a handler for handles, or fit the mushrooming of the rear hand hoops yourself. The actual sharpening was up to you.

I am glad that all our chisels come with a good factory edge. I don't think any of them are ready to use, but for a lot of customers who don't have grinders, having a tool pretty close to usable saves hours.

Our veneer saws are sharp and ready to use. We found that our combination of hand and mechanical sharpening methods produced a far better edge than most people could easily do themselves. Having sharp saws means you can hit the ground running. It seemed to make more sense spending time veneering than figuring out how to get a veneer saw sharp enough to cooperate.

In the photo below are three never-used edge tools as they came from the factory. 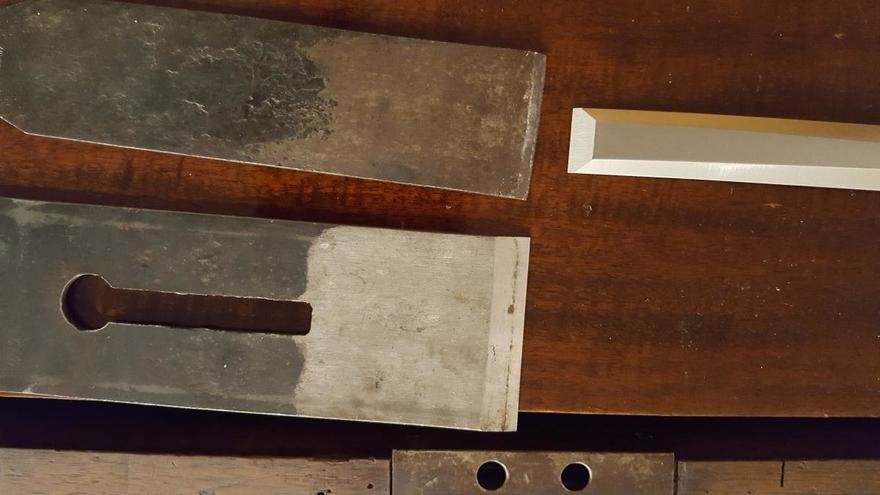 In this next photo, are the same tools flipped over. 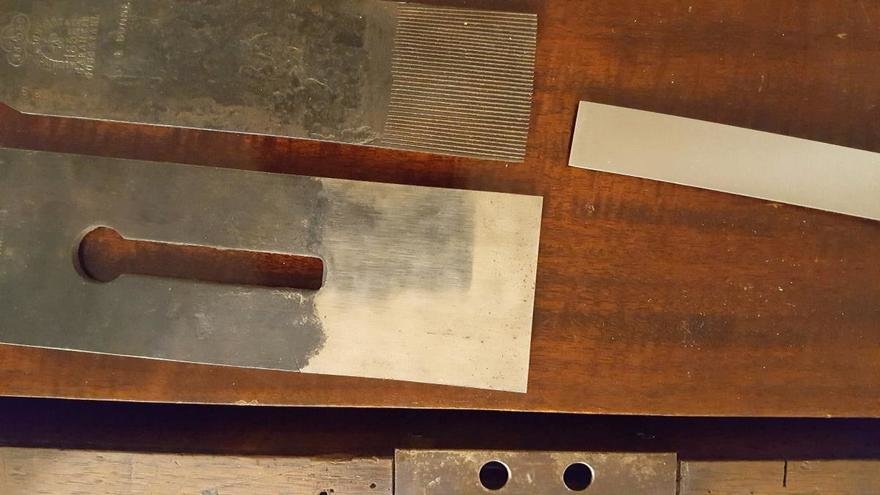 Clockwise from the top:

A German Wilhelm Schmitt toothing iron from the mid-19th century. Yes! This is the same company known today as Two Cherries and the iron is stamped with the two cherries mark (see picture at top of blog). There are no grind marks, but there are file marks on the bevel. I think it's a laminated iron so filing the bevel below the toothed area would work.

A 1960's Stanley 720. The grind marks on the bevel are fairly fine, although the finish on the body of the chisel is even finer. This chisel was made on production grinding machines that were invented just before WWII.

Finally a 19th century Buck Brothers wooden plane iron. The bevel on this is close to a mirror finish, but not quite: there are regular fine grind marks evenly along the bevel. If you hold a rule against the bevel, you can see a very slight hollow from having been hand ground against a very large diameter wheel.

When the iron is flipped over, we can see the ridges of the toothing iron. This iron was designed to successfully plane weirdly grained wood. The marks look forged in, but I am not sure how. Interestingly, they aren't symmetrical - they are more like a sawtooth. Again I don't know why.

The back of the Stanley 720 has even, consistent, grind marks of a large rotary horizontal tool grinder.

Finally, on the Buck Brothers iron you can clearly see the weld marks of the laminated blade. The back is strangely polished and shiny. The back seems flat left to right but there is a definite hollow from front to back. The hollow means that it will be really easy when sharpening to get an even line of flat right at the cutting edge.

If I had to draw a conclusion, it would be that the tool makers made their tools with as close to a finished edge as time and the technology of the time would allow.