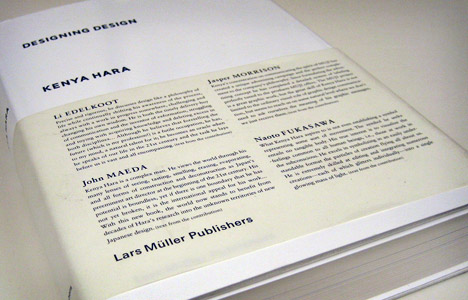 The opening sentence of Kenya Hara's recent book Designing Design states that "verbalizing design is another act of design." For those of us involved as much in design criticism as "design" itself, those are welcome words. They stand in stark contrast to another popular maxim, "Those who can't do, teach," so common in Western business circles. By actively thinking about the process and ethos of design as much as the end product itself, Hara has created a work that reads more like a mandate for ethical product design than as an indulgent graphic design book destined to rest on yet another modern coffee table.

Designing Design serves as a near-perfect companion piece to the Naoto Fukasawa monograph reviewed here some weeks ago. This comparison is appropriate, since both Fukasawa and Hara devote much of their energy to the minimalist Japanese firm MUJI. While some may take the "branding" of MUJI as a "brandless brand" to be a supreme act of hubris or pretension, the firm's emphasis on recycling, simplicity and waste reduction seems presciently apt in these troubled times. The inclusion of his work for MUJI and others, however, is included not as a monument, but instead as a point of reference for Hara's exploration of design as a philosophy of living.

Because Designing Design is written more as a contemplation of the ethics of design than as a retrospective of the work of an individual graphic designer, it seems inappropriate to devote too much of any review to Harra's actual design work. That said, I would be remiss if I did not mention that Hara's designs are almost universally pleasing on a visceral level. Works like his proposal for the 2008 Olympics in Beijing demonstrate Hara's capacity for combining simplified line forms with the judicious use of white space to evoke Chinese calligraphy while simultaneously echoing the German efficiency of Otl Aicher's pictograms for the Munich Olympics. As befits a book that straddles both industrial and graphic design, however, Hara's most compelling projects are those where graphics, paper and signage break into three dimensions. His work for the Umeda Hospital of pediatrics and obstetrics typifies this success. Using white cloth and fabric for signage, he uses the delicacy of fabric and paper as subliminal cues for the cleanliness of the building. Even in such trivial details, Hara is able to subconsciously convey to patients that the sheets must be sterile because even the wall signs are spotless.

The bulk of the book, however, is devoted to examining the projects of others through exhibitions, contests, and even the works of his students. All of these subjects serve to advance his central thesis that to engage in the act of design our man-made environment must also be examined, felt and understood. Kaoru Mende's matches, for example, directly reference their environmental precursors, with a phosphorescent head applied directly on top of a twig. While few of these projects are likely to provide any direct benefit to our wracked environment, they do stand ably as a sort of product design couture, not necessarily to be worn or used, but certainly provoking thought and examination on the part of their users. To naive Western eyes, like my own, Hara's introspective and holistic approach to design thinking (as well as his work) seems nearly impossible to talk about without resorting to cliched terms like Zen.In both its elegantly written beginning and its final coda, however, Hara himself does not shy away from referencing Japanese culture as an inspiration. Between the boundaries of geography and the gyrations of economic success, he uses pachinko's bouncing metal balls as an analogy for the multitude of design influences that trickled east across Asia into their sequestered island. Consequently, he feels that Japan lost something of its own national aesthetic in the wake of its Westernization.

Perhaps a sense of loss of simpler times remains imbedded in the collective consciousness of Japan after the sudden arrival of Commodore Perry's flotilla of steam ships in 1853. I'm not certain if Hara is entirely correct that the Japanese aesthetic was compromised by those events. While the gaudy crash of Western and Eastern culture seems so overwhelming in districts like Roppongi, the island of Japan is also dotted with enclaves of serenity. Emblematically, lovely retreats from modernity like the Itsukushima Shinto shrine can coexist with nearby Hiroshima, which itself stands as a dual signpost to the destructive power of technology and the human capacity to rebuild.

Instead, the tumultuous history of Japan can serve as a parallel to the environmental crisis our world faces today. Such jarring shifts demonstrate that the Western approach of doing rather than thinking can lead to truly tragic conclusions. Perhaps instead, thinkers like Hara can teach us that we should spend more time in contemplation of our environment rather than relentlessly pursuing maximalism and excess.