An off-road Aventador and other ill-advised creations

When you picture a powerful car clawing its way to victory at Paris-Dakar or the World Rally Championship, it's undoubtedly a stubby Subaru or a pugnacious Peugeot. But UK-based NeoMam studios, whose designers frequently render risible auto design mash-ups, asked themselves what ultra-exclusive supercars would look like in rally trim and posted them on BudgetDirect. I wouldn't click past any of these if they came on the TV: 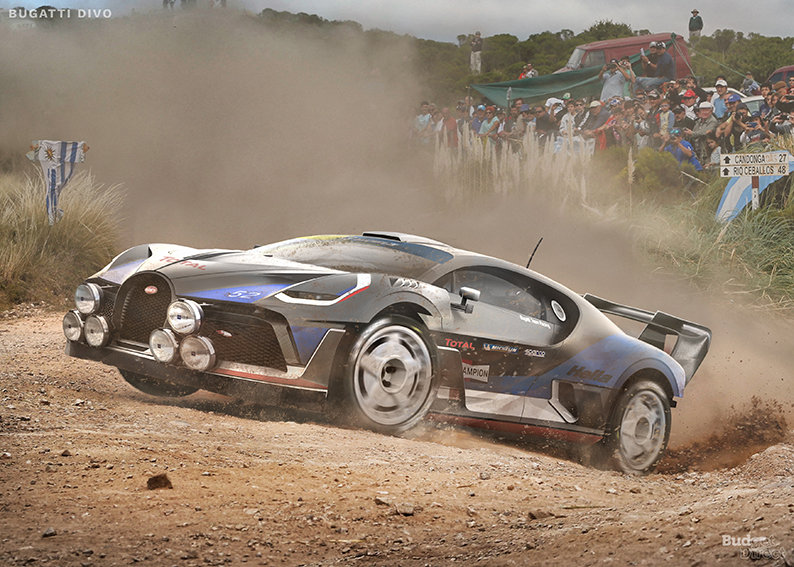 "Bugattis are renowned for their speed, hardly surprising with the Veyron and Chiron both capable of clocking well over 400 kph. They aren't all about straight-line racing though, in fact the tag line for their new Divo is "Happiness isn't just around the corner, it is the corner". So maybe they've actually been trying to build rally cars all this time and were just misunderstood. With the downforce generated by its massive hydraulically actuated rear wing, the car is perfectly built to put its quad-turbocharged 16-cylinder 8.0L engine to full use, while still being able to manoeuvre nimbly in and out of rain-soaked corners." 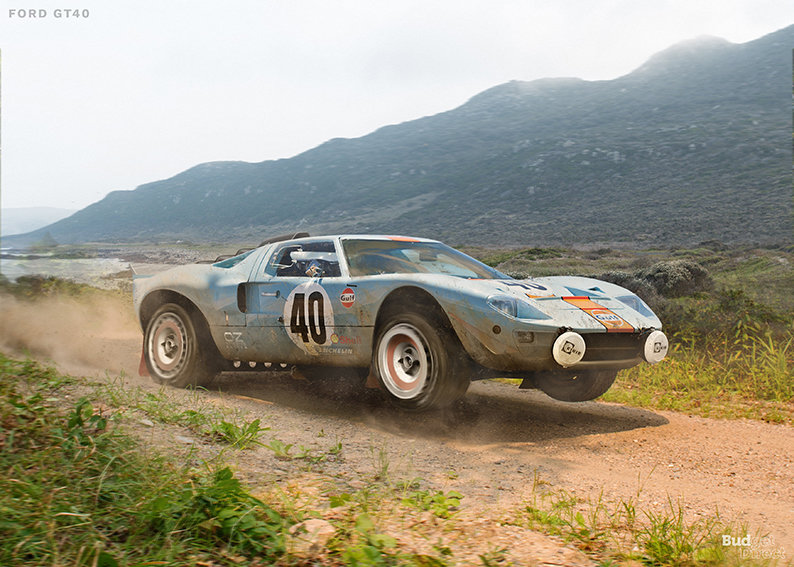 "The GT40 is one of the greatest racing cars the world has ever seen, though that's obviously an easier title to claim on an oval speedway. To truly be worthy of such high praise the GT40 should also give rallying a shot. What would it look like? Well it would have to have the classic blue and orange, "Gulf Oil" colours from its Shelby heyday, while its lower centre of gravity and relatively wide wheelbase would give it a serious boost when it comes to tricky cornering." 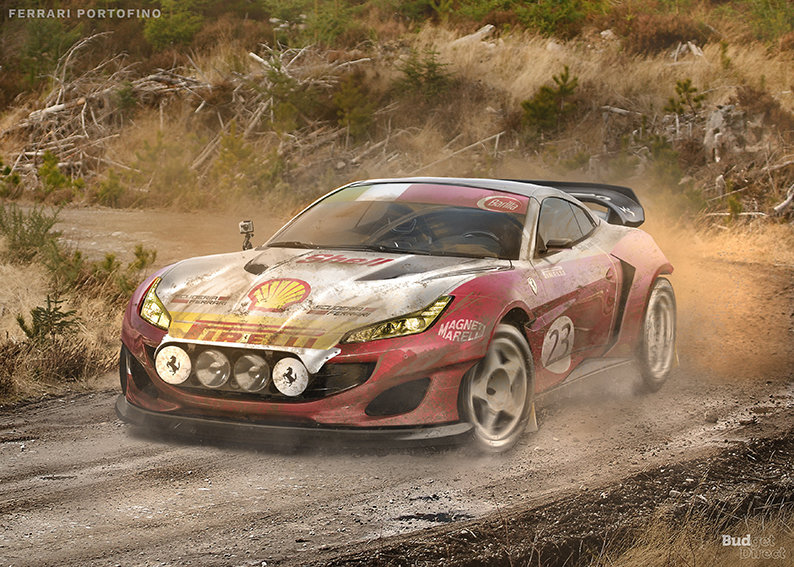 "The Portofino is Ferrari's "everyday" car, you know, the one you jump into when popping down to the servo to pick up some milk. As it's their entry-level Ferrari for the common person, it's the most obvious car for them to introduce to rallying. Expect plenty of pony from its twin-turbo V8. 591 ponies to be precise. While the lightweight aluminium chassis would mean it could accelerate like a rocket, but with slightly better handling." 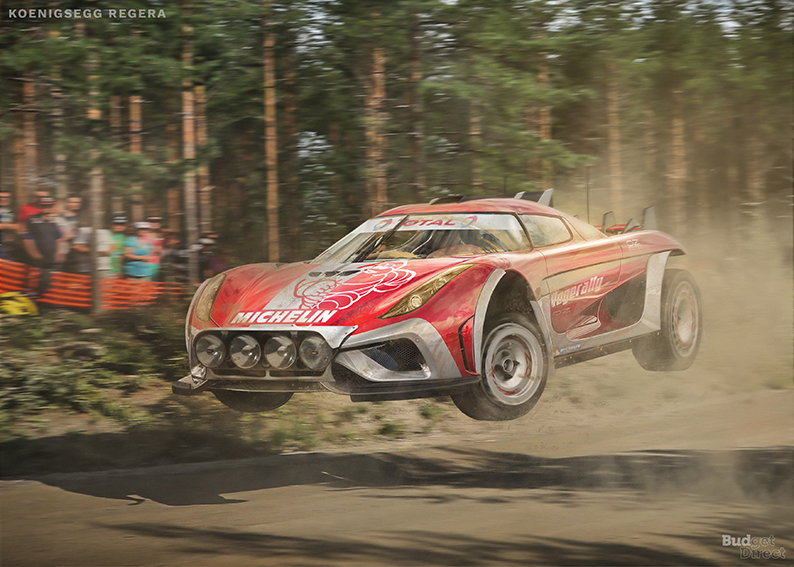 "Acceleration certainly wouldn't be an issue with a Koenigsegg Regera rally car. The Swedish supercar makers famously did away with the very confusing multi-gear setup that so many manufacturers persist with in favour of a single fixed gear. The early speed is provided by electric motors which combine to give it the fastest acceleration in the world, 0-100 kph (0-62 mph) in a mind-blowing 2.8 seconds. It wouldn't matter how tricky the course, in the Regera you could navigate turns like you were pushing a pram full of Faberge eggs then basically warp drive yourself to the next one. With the car's speed topping out at around 402 kph (250 mph), which it gets to in 20 seconds, a rallying experience would feel like just doing the exciting stuff, without having to waste time on the boring straight road bits." 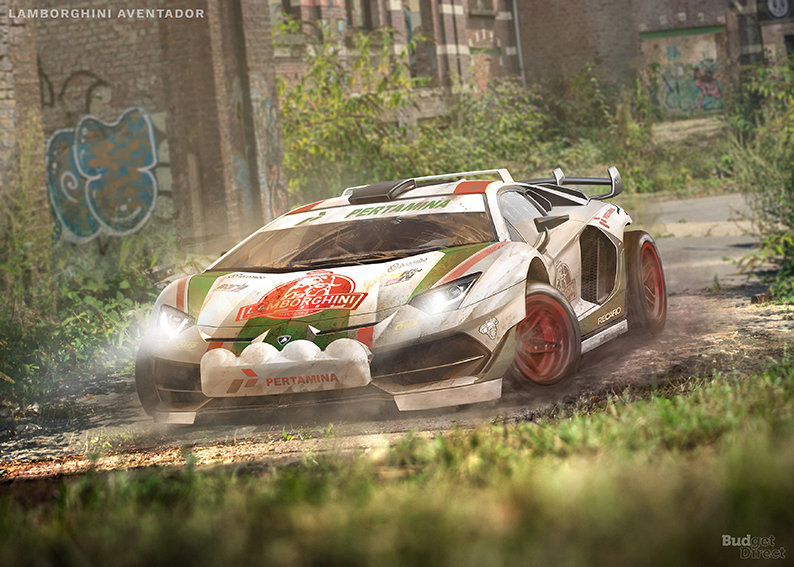 "Going fast can be fun, but you can do that anywhere. The real thrill of rallying is barrelling along a dirt track with an almighty beast of a vehicle, getting drenched in mud and smashing through the undergrowth. What better car for that exact purpose than one which was named after a heroic bull. The Lamborghini Aventador doesn't just bring power however (and with 690bhp it brings plenty of that), it's the first Lamborghini to have their state-of-the-art Aerodynamica Lamborghini Attiva, giving it huge amounts of extra downforce and reductions in drag, to make handling at brutally high speeds a thing of leisure." 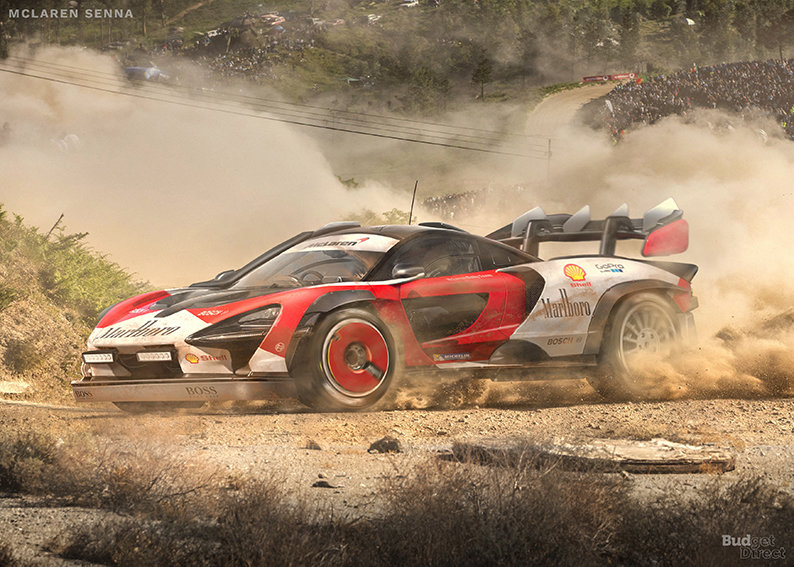 "Named in honour of one of the greatest icons of motorsport, it would be fitting to have the McLaren Senna prove itself outside of the track too. The prominent, electronically-adjustable rear wing would certainly help with handling, as well as functioning as an air-brake if you were getting near its 340 kph (211 mph) top speed, though its ultra-cool Brambo carbon ceramic brakes are pretty nifty at bringing you back down to zero in a hurry too. As can be expected with McLaren, they bring their Formula 1 knowledge to bear with a roof scoop and front and side air intakes to keep its twin-turbo V8 ticking nicely, so it'd certainly be interesting to see if track expertise could bring success in a more 'natural' environment." 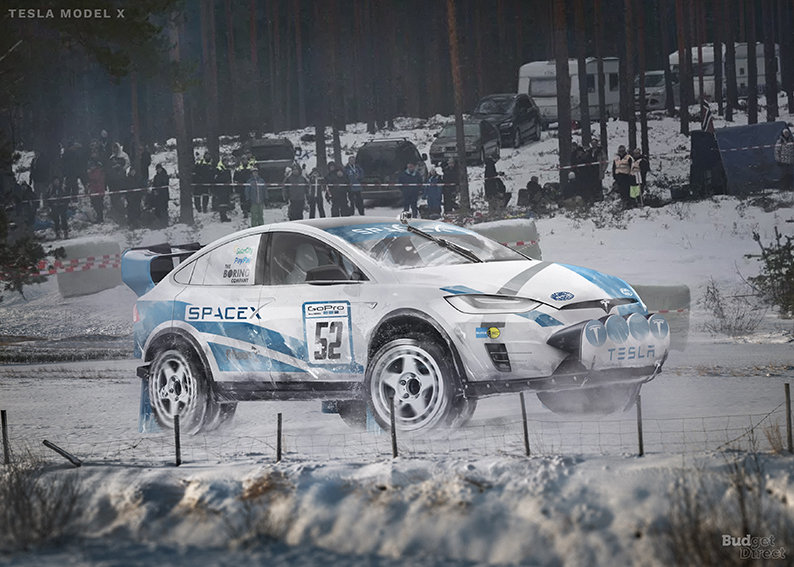 "For a whole new take on rallying, the Tesla Model X would really shake up the old order. Being all-electric it would have frightening acceleration though unfortunately without any of the engine noise that makes the sport so thrilling. Not to be deterred however, the Model X already has all wheel drive as well as Tesla's unique, Smart Air Suspension while its performance edition doubles up the rear motor's power to 503 bhp. It sounds like they were planning for a foray into rallying all along and with Elon Musk still at the helm who would be surprised?" 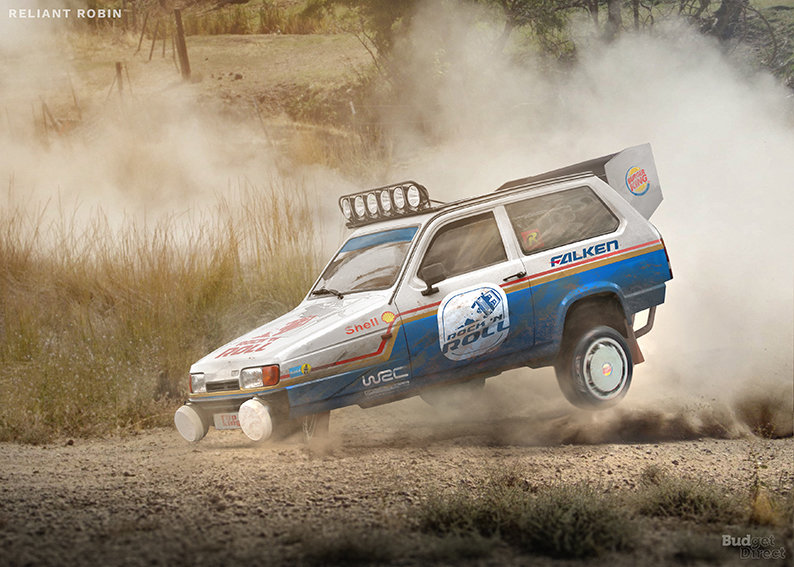 "Maybe not the most obvious of rally cars but the Reliant Robin would certainly be a much-loved people's champion wherever it did turn out. The Robin does have some features which would be advantageous as a rally car, like its super-lightweight fibreglass frame and aerodynamic frame. Probably its biggest advantage however is the fact that it only has three wheels. That might seem counter intuitive but, as its own engineer explained, as its so much like driving a motorbike, Robin drivers become hyper-aware of the car's limitations, forcing them to become expert wheel handlers. A glorious underdog, crowds would surely carry it shoulder-high from the finish line if it were even able to finish a race without turning over at least once."