METHOD will "bridge the gap between desktop and industrial 3D printing"

Editor's note: Although this is not sponsored content, the subject, MakerBot, is an advertiser at Core77.

Typically, small studios and independent designers have only had a couple of choices when it comes to producing performance-quality 3d prints during the prototyping process—either use a standard desktop 3D printer and expect to do some serious touch-up, or turn to a printing service bureau where designers work with machine operators to return their final print, causing a lag in the ideation process. With MakerBot's drop today of their new METHOD performance 3D printer, it looks like the days of the middleman may be quick to fade away.

METHOD is a performance 3D printer that fits on a desktop, and boasts several features rarely seen on the low-end (aka under $20,000) 3D printing market today, including water-soluble PVA support systems, incredibly high tolerances, and intuitive touch-screen UI features that allow designers and engineers to unbox and get going on prints within minutes.

The introduction of METHOD not only marks a shift in the design industry in terms of high-end tool availability but also for MakerBot as a producer in the hobby and consumer space—President & CEO Nadav Goshen says when he came on board in 2016, the team set an entirely new market strategy that focused on engineering their products for the education and professional market. As the company dug into user research, they saw a huge opportunity. "When we looked at the professional segment," says Goshen, "we saw there was a huge shortcoming in the market because industrial designer and engineers are lacking the tools to iterate faster. We thought, 'how can we make something that's as reliable and precise as an industrial printer, but make it accessible to the individual engineer?'" 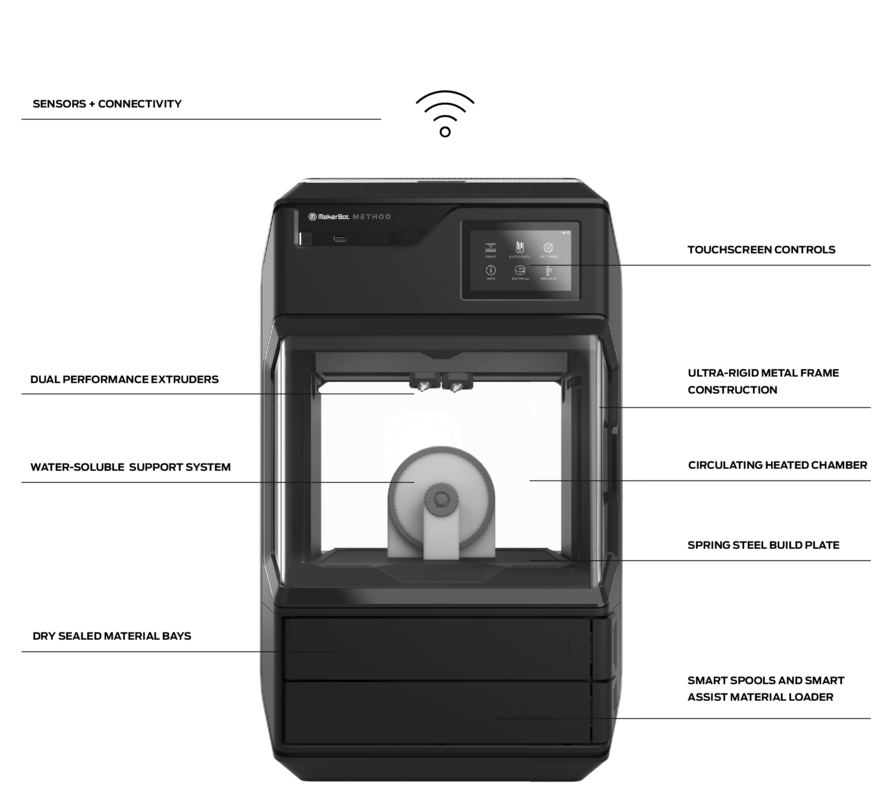 Given the origins of MakerBot as a consumer-friendly desktop printer, the team had extensive experience in taking very complex technology and making it easy to use. MakerBot Vice President of Engineering Dave Veisz notes that, "typically, to print something complex on a desktop [printer], you really need to understand that printing process to say 'ok, in order to remove my support, I need to print this vertically because that's going to give me the best chance of success'—but we don't want the user to have to go through that. We want them to be able to shoot that from their CAD program to the printer and have confidence they're going to get what they want." Thankfully, the user interface of METHOD takes away much of the barrier to entry when it comes to using a 3D printer, even one built for professionals. The touchscreen is simple yet allows for customization, the material loader allows for quick, easy insertion, and it's compatible with a variety of CAD software. 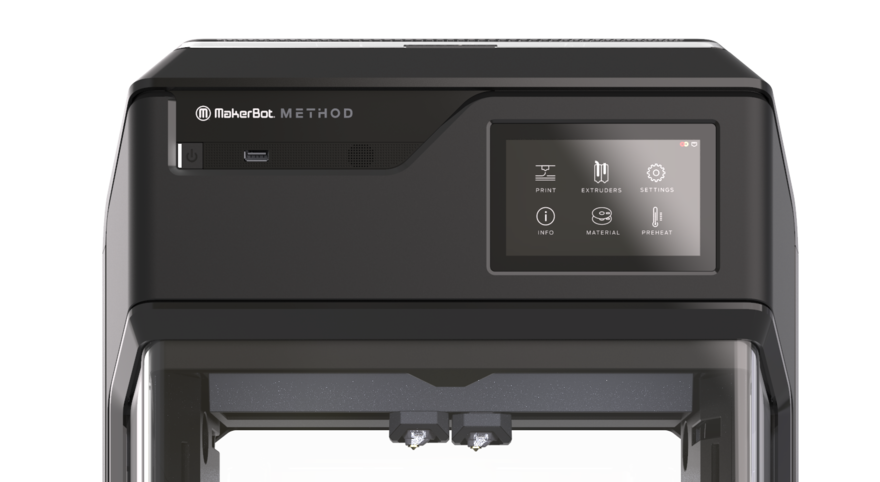 To accomplish their goal of developing an attainable yet uncompromisingly high-quality printer, the team behind METHOD also looked at critical features for industrial designers and engineers. First, there was the issue of reliable tolerances. Most desktop 3d printers offer up an estimation of a final product, i.e. it's often hard to print moving parts that will fit together flush. With METHOD, CAD tolerances as close as 1/2000th of an inch on CAD can be achieved within a printed piece (goodbye, sandpaper!). To get to this point involved some highly complex engineering, including perfecting heating temperatures for different materials using a circulated heating chamber and dual-performance extruders that provide an ideal environment for consistent liquefication of material. 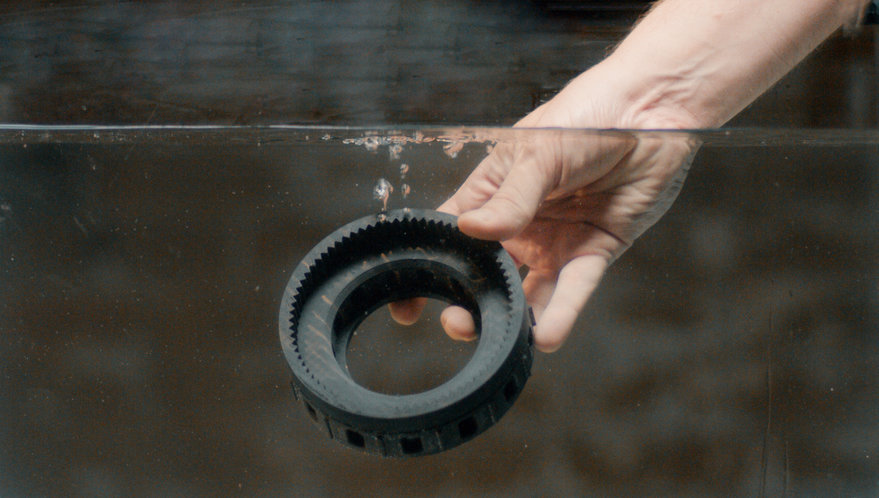 The incorporation of PVA supports is another exciting feature. PVA, a primary component in Elmer's glue, is tap-water soluble. "When printing on METHOD, any supporting surface is printed on top of [PVA], "says Veisz, "the result is that when you dissolve it, you actually have a functioning [moving part]." The pieces can also be printed on top of one another, saving overall printing time, material, and bed space.

A moving claw part printed in one piece on MakerBot METHOD 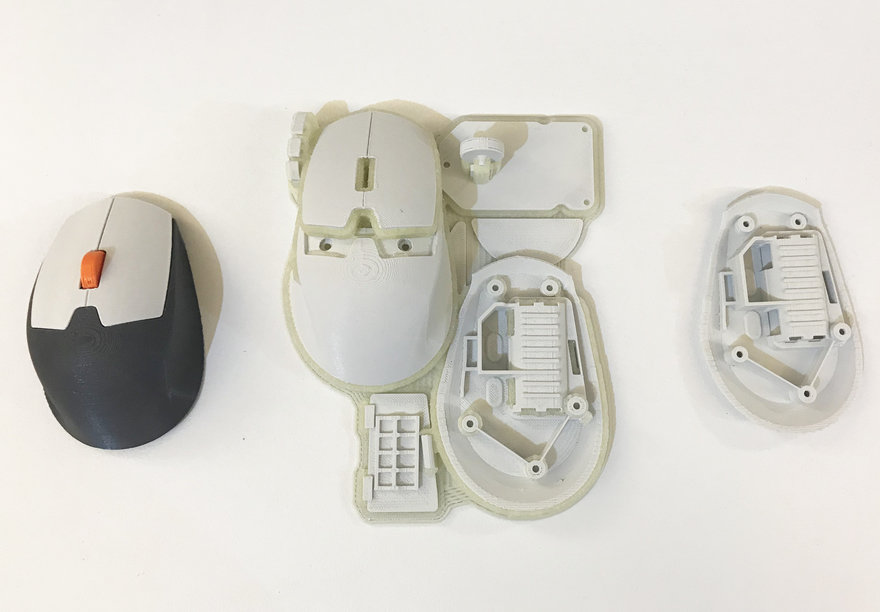 Mouse parts printed off of METHOD

The overall mission, Goshen tells us, of producing a machine like METHOD is allowing less time for troubleshooting, and more time for ideation and learning: "the starting point for a professional grade printer is very high; but when we have this tool closer to an individual designer, the amount of iteration will extend. If you iterate more, and you have more touching points with your product, I think you'll develop a better product."

MakerBot METHOD is available for order now and retails for $6,499, so while it won't be going in the studio of all designers, it's certainly something that's going to be worthwhile for slightly larger companies and studios with in-house design teams who want to save serious time in the product development phase.