Here's our ten favorites, with commentary

National Geographic's photo contests always draw incredible submissions from around the world, and this year is no different. Perhaps the best part is that entrants willingly yield the rights to their photos, allowing NG to make each one freely downloadable as wallpapers for your desktop, tablet or phone.

You can check out the 2018 Finalists here. We've just gone through the list, and here are our ten favorites. (The captions are written by the photographers themselves, with our enlightening commentary placed after each photo.)

PHOTO AND CAPTION BY JASSEN TODOROV 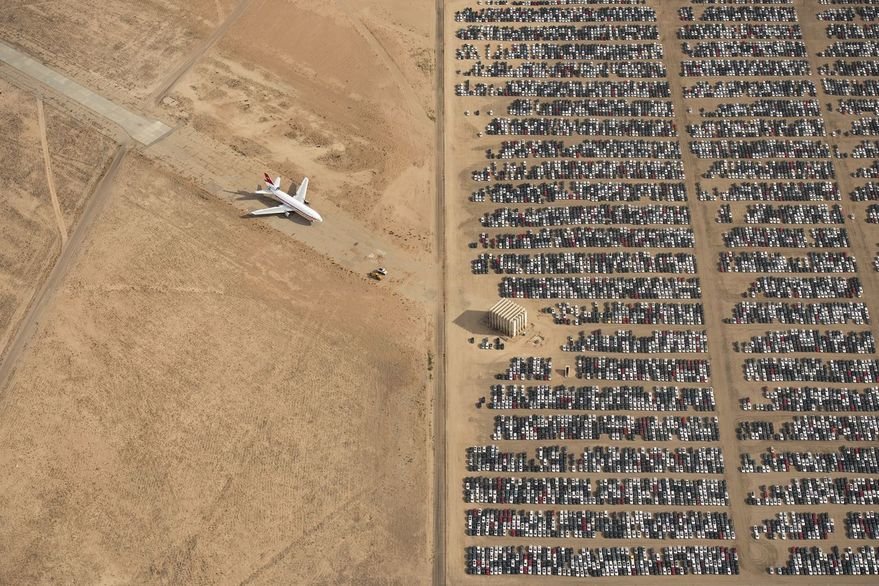 "Thousands of Volkswagen and Audi cars sit idle in the middle of California's Mojave Desert. Models manufactured from 2009 to 2015 were designed to cheat emissions tests mandated by the U.S. Environmental Protection Agency. Following the scandal, Volkswagen recalled millions of cars. By capturing scenes like this one, I hope we will all become more conscious of and more caring toward our beautiful planet."

I bet the plane gets better mileage than any of those cars.

THUNDERBIRD IN THE DUST

PHOTO AND CAPTION BY NICHOLAS MOIR 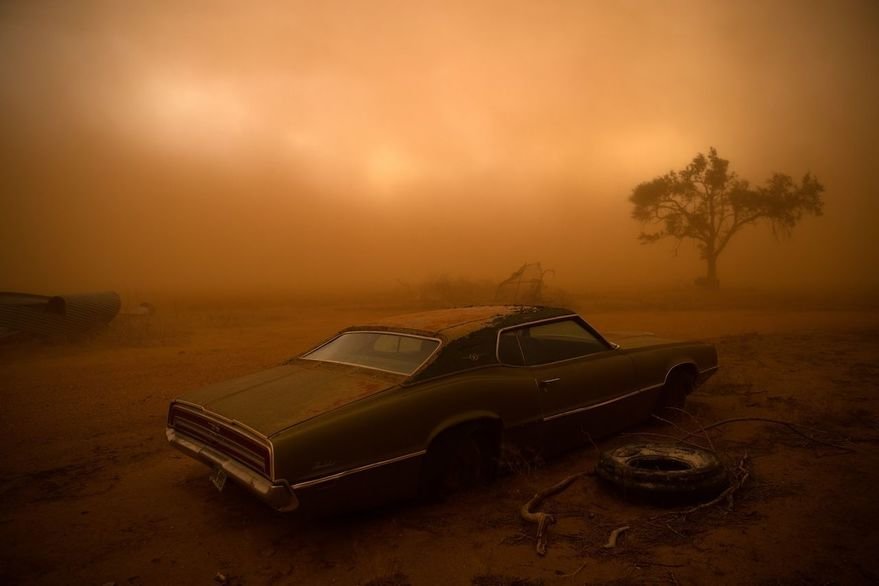 "A rusting Ford Thunderbird is blanketed by red dust from a supercell thunderstorm in Ralls, Texas. The dry, plowed fields of the Texas Panhandle made easy prey for the storm, which had winds over 90 miles an hour ripping up the topsoil and depositing it farther south. I was forecasting and positioning a team of videographers and photographers on a storm chase in Tornado Alley—this was our last day of a very successful chase, having witnessed 16 tornadoes over 10 days."

PHOTO AND CAPTION BY MIKE DEXTER 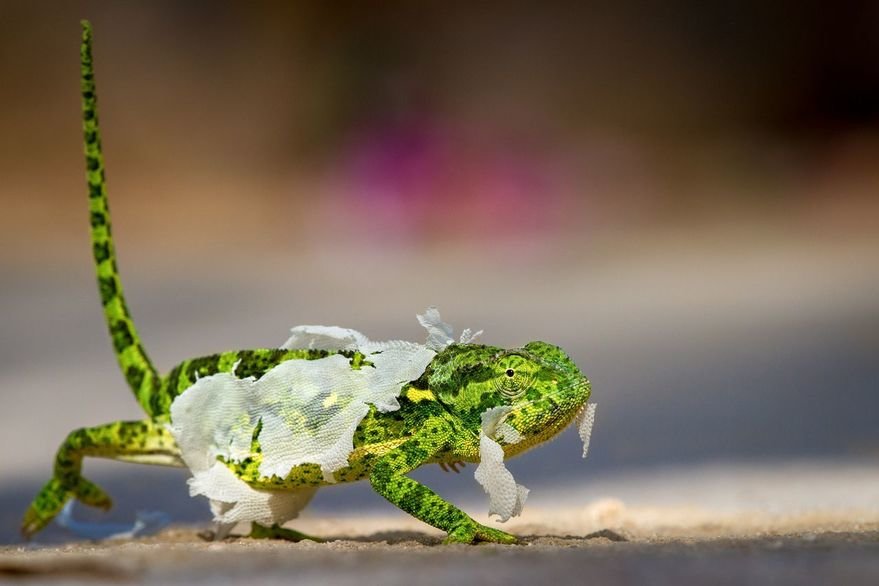 "CHAMELEONS SHED THEIR SKIN REGULARLY THROUGHOUT THEIR LIVES BUT, UNLIKE SNAKES, IT PEELS OFF IN BITS AND PIECES RATHER THAN AS A WHOLE. This flap necked chameleon, mid shed, was tentatively making its way across an open sandy area putting itself at great risk from predators. My aim was to capture an image that depicted the vulnerability of the situation so I lay down, transporting myself into its world."

This chameleon is known to his friends as "Ashy Larry."

PHOTO AND CAPTION BY THOMAS VIJAYAN 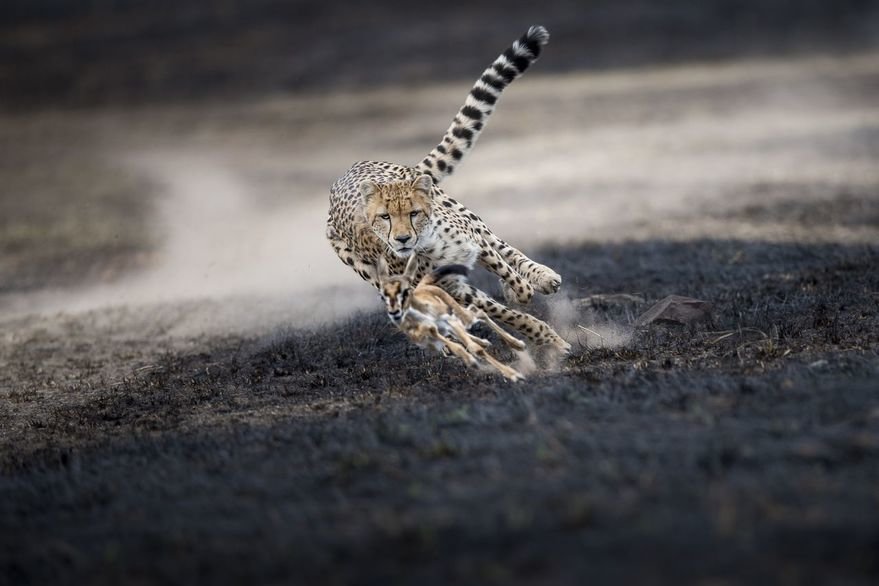 "After many days of following a cheetah on the second last day of my trip this cheetah target a gazelle cub and started running towards the gazelle exactly the way i wanted and I was able to capture it running in between the black grass with a dust forming behind its legs creating a magical frame. But the end was more astonishing. The cheetah started playing with the gazelle fawn like its own cub and then after sometime set it free to its mother. Even the animals value the life of other animals."

Too bad they don't value the emotional wellbeing of other animals. You don't think that gazelle cub is traumatized? One time when I was a kid I got chased through a parking lot by a bully. He didn't catch me and beat me up but it still messed me up for a while. Plus I ruined my favorite shirt with motor oil from hiding underneath a Plymouth. If you're reading this, Mike Gallinari, fuck you! You owe me a shirt.

PHOTO AND CAPTION BY MARTIN SANCHEZ 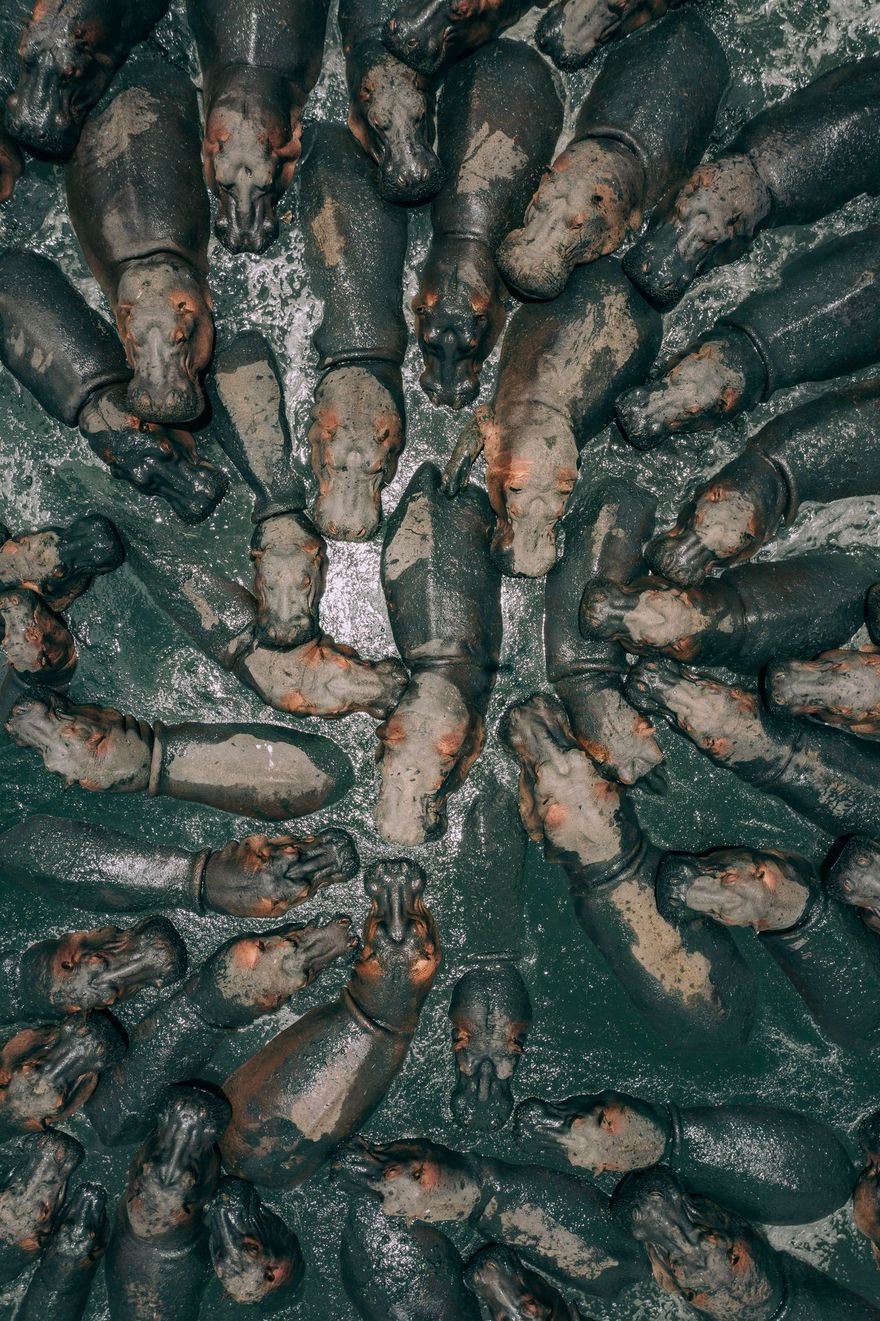 "I found a hippo party and decided to join! AND WE ALL DECIDED TO PLAY HUNGRY HUNGRY HIPPO! :)"

"Well, one of you has to move or we'll be stuck here forever! I told you I can't back up, there's no room--can one of you do a three-point turn?"

PHOTO AND CAPTION BY ALEXANDROS MARAGOS 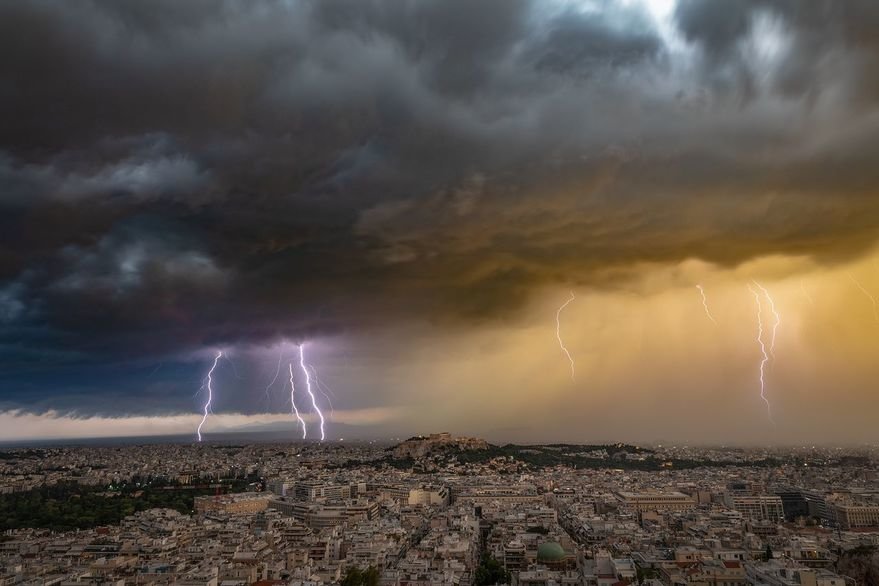 "A severe summer thunderstorm in Athens, Greece with the Acropolis between lightnings. June 23, 2018."

Or as the Greeks call it: "Zeus wildin' out."

PHOTO AND CAPTION BY MAGGIE MACHINSKY 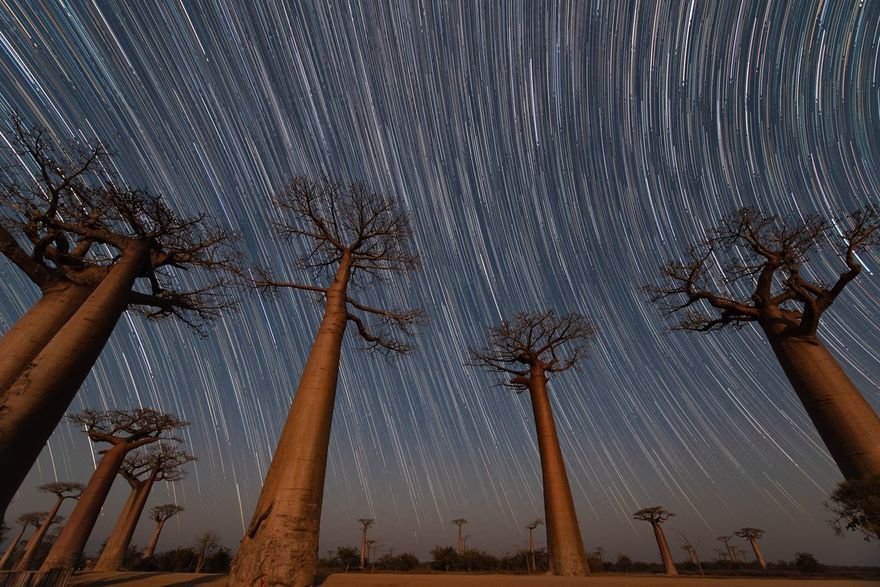 "In a time when approximately 1/3 of the world's population can no longer see the Milky Way with the naked eye, Madagascar is a rare, isolated paradise untouched by modernization or light pollution. This is a 47 minute exposure of the sky trailing over the iconic 800+ year old baobab trees of the famed "Allee des Baobabs" in Morondava, Madagascar with the setting moon illuminating the foreground."

You will see something similar if you eat broccoli and take LSD.

PHOTO AND CAPTION BY LILIAN KOH 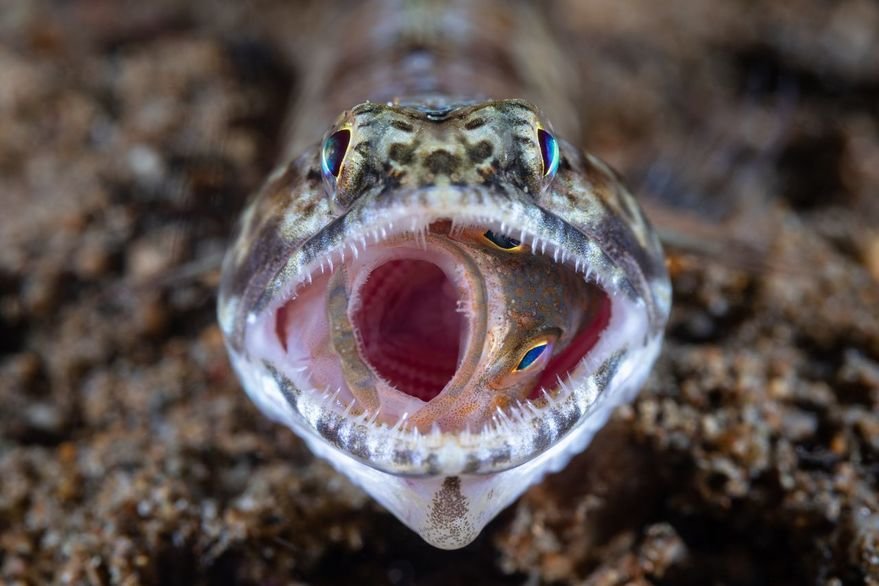 "A juvenile grouper is fighting for its life while the lizard fish trying to ingest it. Story after this shot was the juvenile grouper managed to break free from its jaw. Alive but can barely swim, however it took 2 breaths before it was eventually eaten by a prowling snapper nearby."

Lizard fish eat with their mouths open. I guarantee you these fish don't swim in schools…because they got no class. 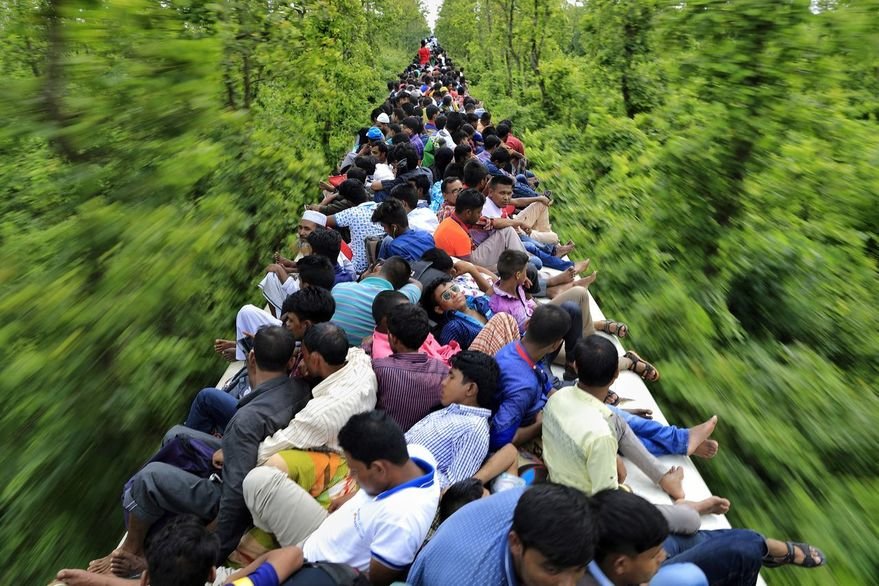 "Thousands of millions people travelling on the roof an overcrowded train heading for Dewanganj, Jamalpur, from the city of Dhaka to celebrate Eid-al-Fitr with their families."

"Dude STOP LEANING ON ME"

PHOTO AND CAPTION BY BARTLOMIEJ JURECKI 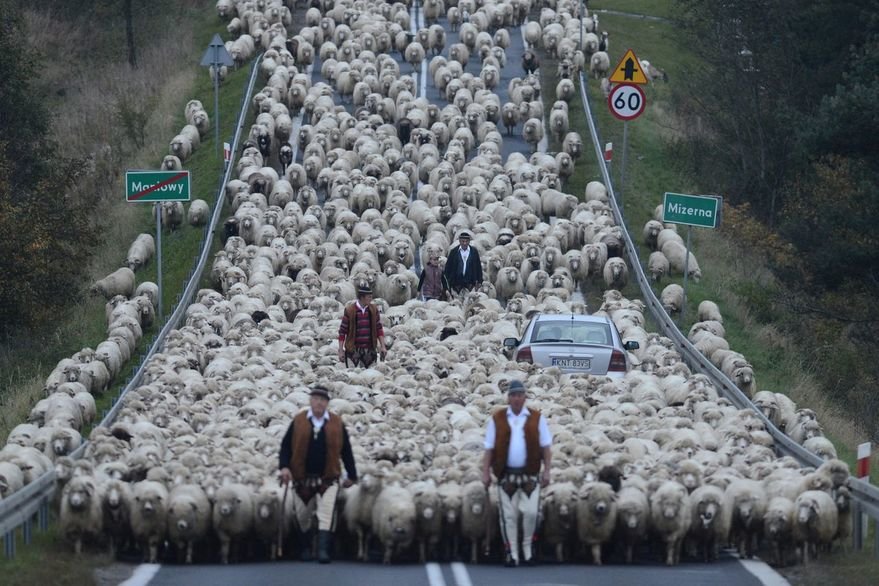 "The traditional and counting more than 1,900 animals, sheep grazing called "Redyk". From the Low Beskid in mountains to the city of Nowy Targ, Poland. shepherds bring back the animals to the owners who will take care of their sheep during the winter. Animals will come back to the mountains in the spring. It has been a tradition for many centuries to take the flock of sheep to the mountains for grazing."

Man in the car: "Boy, this traffic is baaaaad."

His wife: "If you say that one more time I swear to God I'm divorcing you"