As certain rooms in our house become obsolete, will furniture keep suit? 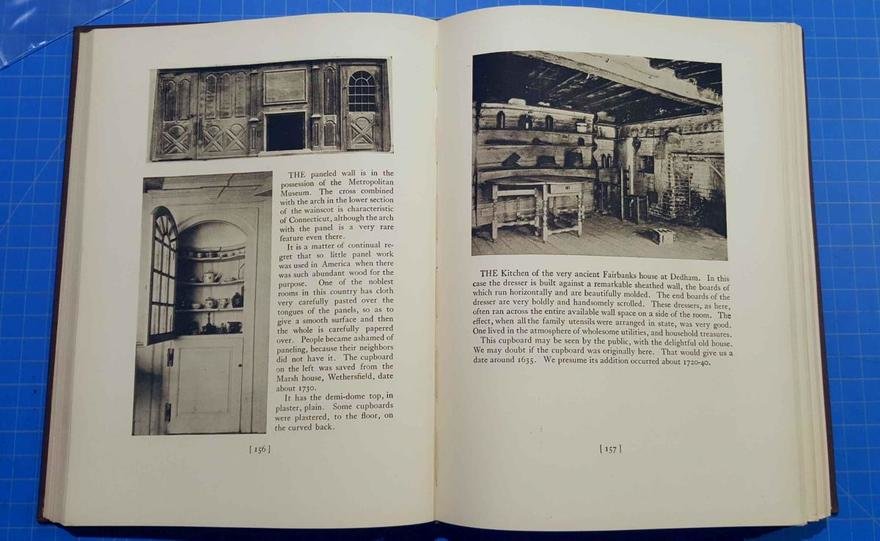 The picture above comes from "Furniture of the Pilgrim Century" by Wallace Nutting (1921).

Here are four links to articles in the New York Times that set me pondering.

The first says the antique furniture market is collapsing because nobody wants the old stuff, but the article gives hope for modern makers. How Low Will Market for Antiques Actually Go?.

The second says nobody wants the old stuff because people aren't using their living rooms or dining rooms since everyone congregates in the kitchen. Why Are Antiques So Cheap? Because Everyone Lives in the Kitchen.

The third article points out that our society exalts the expert but we would all be happier and have a lot more fun doing stuff if we were a little more tolerant of mediocrity. In Praise of Mediocrity.

The last article says the internet facilitates hobbies and crafts because people who are spread out all over the world are getting together in small little groups. This is not only true, it's AWESOME! And it's great seeing confirmation in print. Online Hobbyists Can Reaffirm Your Faith in the Internet.

I find the last two articles true and encouraging. I find the first two true but depressing.

It's the second article that ultimately I found most important. It's true adults do not entertain as much as previous generations did. We don't even eat meals together like our forebears did. We don't have staff so if you entertain, chances that guests who want to talk to the hosts have to hang out in the kitchen and help. Adults are also working longer hours so entertaining at home can easily become a big chore (or never happen).

What is interesting to me most of all is that historically it's not so much a change as much as a return to earlier patterns of living.

{26:8} And it came to pass, when he had been there a long time, that Abimelech king of the Philistines looked out at a window, and saw, and, behold, Isaac [was] sporting with Rebekah his wife. And Abimelech called Isaac, and said, Behold, of a surety she [is] thy wife: and how saidst thou, She [is] my sister? And Isaac said unto him, Because I said, Lest I die for her.

The reason Isaac and Rebekah were outside was that there was no privacy inside.

Rooms and privacy came later. Before the invention of the chimney (12th century) almost everyone slept in one big room. The lord of the manor might have an area with some partitions, but heating was a big fire in the middle of the room with a hole in the roof. Just about everyone else slept in common spaces. A hayloft would have been dry and warm. Average people didn't have much in the way of possessions, so a big blanket chest might be all one would need. Peasants and serfs would have had their animals living inside to protect against their theft and also share the heat.

Without a separate fireplace going, the communal areas around the kitchen or really the main fireplace were where people gathered. The house was a place you slept, ate simple meals, and stored your few possessions. The Church, the local pub, the village common, and the street was where you socialized.

In the Victorian age, when the industrial revolution gave rise to a large middle class, their private homes became miniatures of what rich people lived in. The parlor, the living room, and the upstairs bedroom. For the first time the kitchen was in the back, tended by a household staff in all but the poorest houses. The poor were crammed into single rooms and largely bought ready to eat food. Water, if the place was lucky to have running water, probably only came into a tap in the basement or kitchen. Bathrooms with plumbing come into play in the second half of the 19th century. By the turn of the 20th century, the basic design of middle class private house was widely understood: public rooms, private rooms, and a kitchen in the back, with room for live in staff. After World War II, private house ownership exploded but labor was in short supply. Cities, New York City especially, provided an alternative model of middle class and upper middle housing before WWII, with a small maid's room and bathroom tucked in near the kitchen in the back of the apartment (with a second service entrance). But the white brick buildings that rose up in the post war period contained a nice kitchen in the middle of the apartment and no provision for staff.

As fewer and fewer families had anyone staying at home during the day (because everyone works), there was far less incentive and energy to entertain, show off their furniture as a symbol of wealth, and with the advent to television, live collectively.

In many ways we are returning to our roots. Everyone works, comes home at what used to be workaholic hours, and has little time for hours of socializing. We don't have the energy to emulate the very rich who still have staff and entertain. The furniture associated with that live-style sits unused. The new generation just doesn't bother. I have been amazed by a new style of multi-bedroom apartments in NYC that don't have living rooms. The apartment has bedrooms spoking off a central room with kitchen appliances. This model was presumably developed with roommates in mind, but families are also renting them. In more spacious suburban homes, the "den" has become a relic as family members spend more time in their rooms, alone with their electronics.

The future of furniture is a subject that interests me deeply. What will future woodworkers build? What is the point of building a nice dining room table if you don't plan to use it? Will we be inventing new furniture forms or just tweaking the old designs? Will the old techniques still have a place in this evolution? Or are we all destined to be building square melamine boxes? This blog entry is the start of an occasional series as I try to understand these questions. Before I can go forward I think I need to go backward and understand the social reasons why the furniture we have looks and is used the way it is. I think I also need to understand the difference between building a piece of furniture because it's an interesting project and building a piece of furniture because it's needed.

A lot of writers talk about people wanting experiences rather than objects. There is truth to this, especially in New York City where space is at such a premium, but humans have pretty much been thrilled about consumption since commerce began. I don't think I am ready to write off the possessions concept any time soon. Of course I want to learn how to encourage people to want to build things. In the next months I will be going to the library, discussing ideas with colleagues and experts, scratching my head, and trying to understand my world and where we are headed.

In other news - our BT&C hardened planing stops are [finally] available.

This "Tools & Craft" section is provided courtesy of Joel Moskowitz, founder of Tools for Working Wood, the Brooklyn-based catalog retailer of everything from hand tools to Festool; check out their online shop here. Joel also founded Gramercy Tools, the award-winning boutique manufacturer of hand tools made the old-fashioned way: Built to work and built to last.p