At the world's largest grad show, students design for an aging population

In the Dubai Design District, groups of students in school uniform roll around in Thomas Heatherwick's chairs. Buggies transport visitors from one exhibition to another. In the plaza, pop up installations draw visitors in with their cooling mist spray and shade. The coffee shops are crowded with young designers, chatting about their projects while standing in line for a cool drink in the afternoon desert heat.

This is the Global Grad Show, the largest student gathering in the world. It is part of Dubai Design Week, both in their 4th year, and this year the student exhibition showcased 150 projects made by designers from 100 schools across over 40 countries. Talk about representation.

As we walk through the exhibition area filled with medical devices, altered clothings and remodeled furniture, one pattern seems to emerge among the most compelling projects: many of these young designers are designing with the elderly in mind. 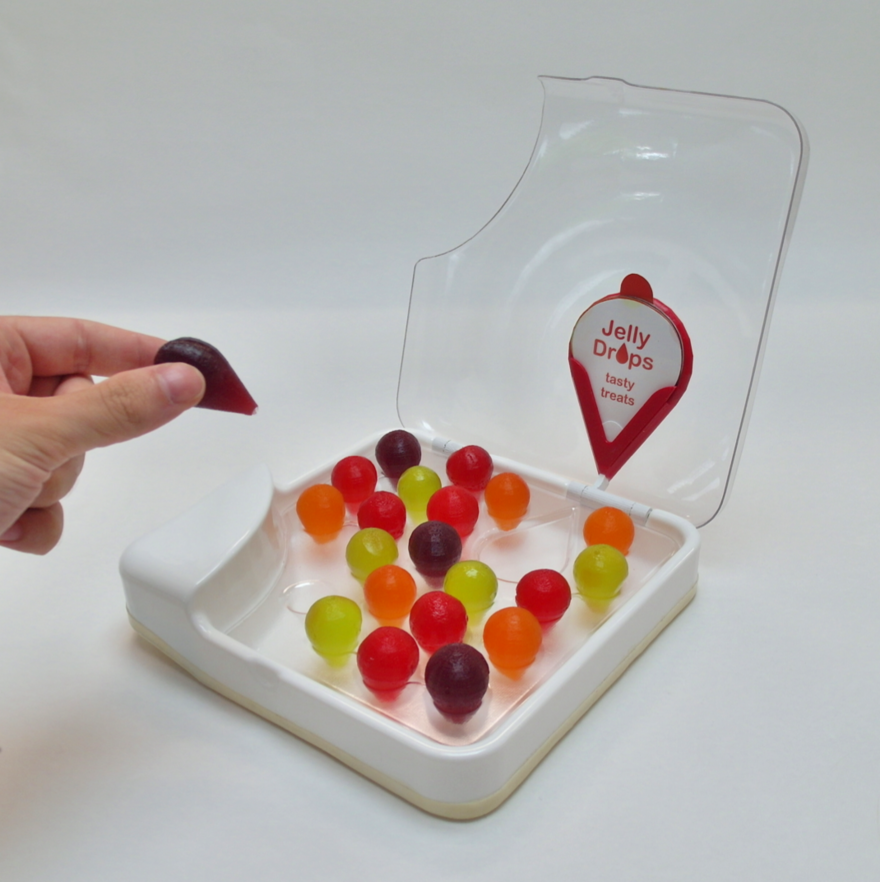 Take Jelly Drops, for example, designed by Lewis Hornby. Hornby saw that his grandmother was struggling with dehydration and spent weeks living in her care home to learn how to create a source of hydration that people with dementia would interact with. The result is a box of super hydrating treats–a box of Jelly Drops can be equivalent to drinking over a liter of water—and the colorful, easy-to-eat format encourages dementia patients to feed themselves. 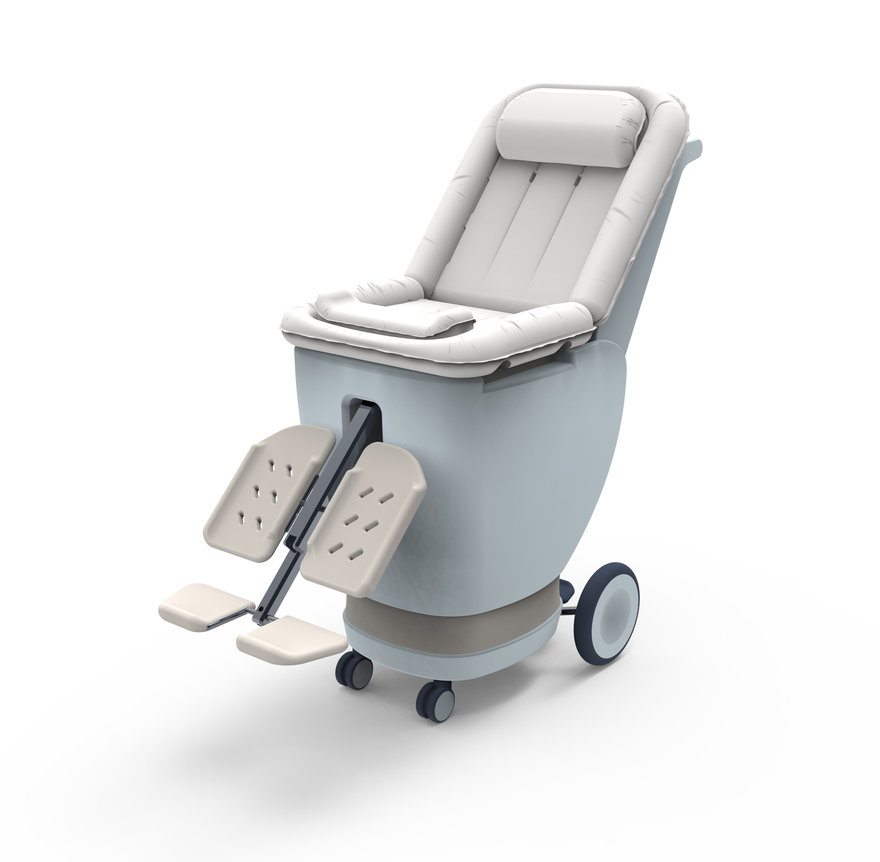 There's Cushy, an inflatable medical chair designed for elderly homes, to make everyday sanitary routine more pleasant and easy for both the residents and their caregivers. Cushy can be used at each step of the process, from transferring the resident from bed into the chair, to undressing, showering, and dressing after. 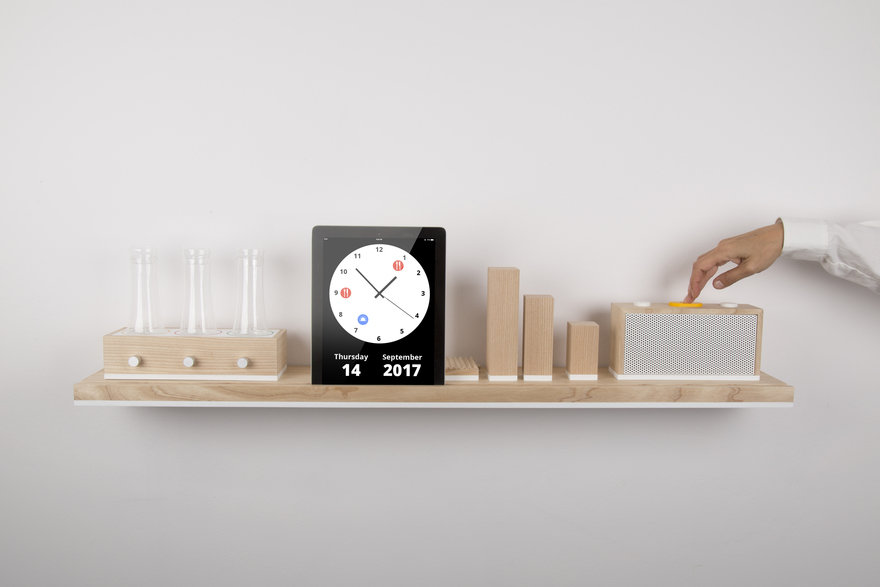 Memo is sensory therapy for people with Alzheimer's disease. The set includes a speaker and various instruments for music therapy, a fragrant diffuser that can be adjusted for different functions eg. to stimulate appetite, to calm before going to bed. There is also a set of memory exercises and caretakers can add relevant photos that bring back memories. 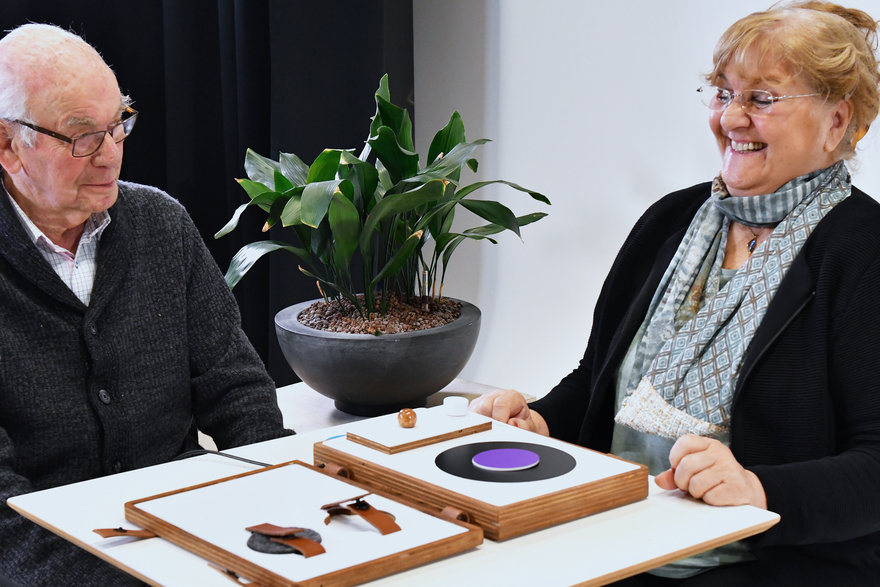 Another project designed for dementia patients is Sentic, a music player designed for tactile interactions and encourages users to touch and play. Music is said to improve mood and trigger memories and the player, being personalizable, increases feelings of self-control in patients. 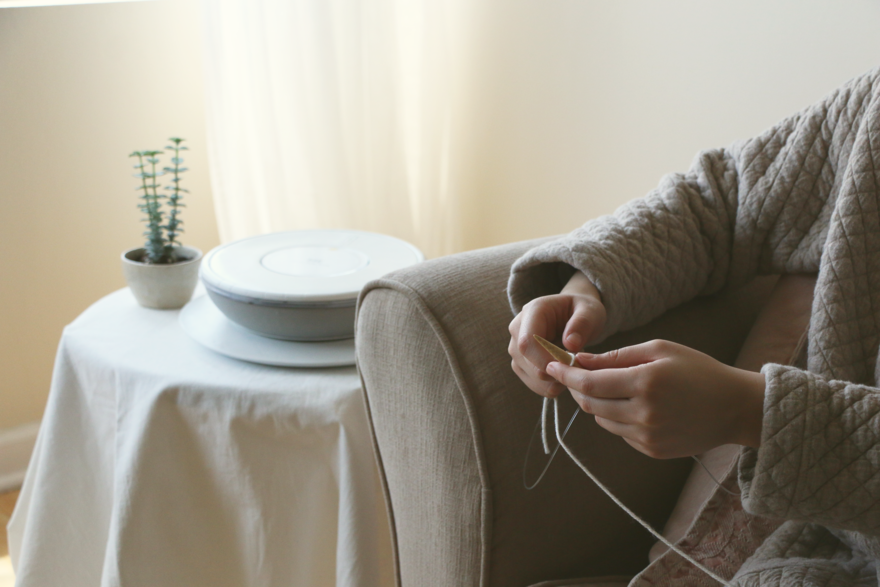 It's not just elderly persons' health that the students are attentive to, they also recognize the loneliness in old age. Melo is a music sharing device that connects seniors to their loved ones. Instead of public radio stations, the elderly can tune into the music that their family members are listening to, bringing them together across time and space with one shared tune.

The task of selecting 150 projects for the exhibition out of over 1,000 entries falls on the shoulders of curator Brendan McGetrick, who has been in charge since the show's inception. We sat down with him at the Global Grad Show in Dubai to chat about the trend of student designers designing for seniors, as well as how he evaluates projects for the show.

We've been aging forever, so old age is not a new issue specific to our times, but it doesn't seem like the technology is keeping up with the needs of the elderly. What are the barriers these products face in terms of implementation?

One of the big barriers is simply the limitation of the market and what the market thinks is worth spending money on. Now there are retirees who have more money, the baby boomers are going to change everything because of their size, their resources and because they demand a lot. Although it is a poorly addressed community at the moment, I wouldn't expect that to be the same in 10 to 15 years.

Do you see a trend of an increasing number of students designing for old age?

It's been consistent the whole four years, yes. Maybe it's a counterintuitive thing but it's really clear that young designers are really concerned about this. Not just aging but all the things related to it: dementia, Parkinson's, macular degeneration, all these disabilities that revolve around aging. I wouldn't have guessed that but every year it's been really consistent.

I've always preferred student design to profesional design because it's a lot more emotional and you can get a much wider range of projects that deal with issues that are sometimes not commercial. We fly in everybody, all the students, and we don't actively pitch any projects to investors, so it's not a competitive atmosphere. Dubai the city itself is also a mixing chamber of all these cultures and has a friendly approach to visas. This couldn't happen in New York or London.

What types of projects appeal to you most?

It has to do something different. It gets me out of evaluating aesthetic qualities like "Is this chair beautiful?" Yes it matters to me that they make a positive social impact, so I wouldn't pick an app that gets somebody to do your laundry. We have so many submissions so I can be really strategic and pick say, objects that are for the elderly, or objects that are low-technology. I can be a curator now because I have a lot of raw material to work with.

With regards to the elderly-focused projects, are the most viable markets hospitals or private patients?

There's two different kinds. One is for people that live alone. The one about the radio (Melo, above), that's a beautiful project. The idea is that everyone in your family and friends has a radio station and it's playing their music, so you can listen to whatever your grandson is listening to, and it's dealing with this issue of loneliness where music can fill the space.

What's happening now, and is becoming a bit of a political nightmare, is that old people are lonely and they're watching 24 hour news because it kind of is a presence, but it's a really—in my opinion—toxic presence. What Melo is trying to do is fill the space not with TV but with music, and you bring a family or friendship group together.

Last year there was something similar as well, on online gaming for the elderly, and the idea is that you can play a simple game with somebody else—Scrabble or whatever—and the feeling of feeling connected, even when you're living by yourself, that's one range of issues that these student projects tackle.

The other range is really about care and improving the lives of people in old aged homes or in hospitals.

What makes Melo stand out for you?

That's a good project because the technology behind it already exists but it's a very clever way of thinking about how to use that technology, and to identify an experience that means something.

And about the social gaming platform last year...

It was the same concept where they used existing technologies and applied it to a new demographic: elderly people, who don't play online video games so much, but play, say, Scrabble, and then to support them to do so online in a collaborative, social environment.

What happens when someone has a great idea and you like it?

If someone comes by and says, hey I'm the head of Sony, or Apple Music, and I'd like to use this, then yes we would go help connect them and make it happen.

Do you think the next trend might be to adapt existing technologies to an elderly population?

For sure! I accept projects like that all the time. If you don't do that then you'll rely on things that often times require a lot of money to produce a prototype, and a lot of times a project is brilliant because it is a brilliant idea and it looks at something in a new way.

And about elderly products—

It's really one of the themes that's always fascinating for me. Every year there's loads of projects. I have a whole catalogue. In the future, there will be more and more demand for elderly lifestyle and care products.

Once, I gave an interview and I said I'm really surprised and happy to work on elderly projects—it was in the Vancouver Sun or something—and some guy wrote me an email: I'm 87 years old and I read your interview in the Vancouver Sun and it really touched my heart and made me really happy that it's happening. And I went, oh my god! Old people would feel so happy if they knew that young people are not laughing at them or thinking they're irrelevant, but they're trying to figure out how to make their lives better.

East Asia, in particular, has a lot of the best thinking about these kind of stuff. It is a very particular kind of thinking, and you consistently see it coming from Hong Kong, Japan, Korea. To be honest I think you're onto something, because when I see my father and all his friends they're all...old, but young spirit, and they're baby boomers, and they need more and more, so there's a tremendous appetite for elder lifestyle and products. Whoever cracks it will make a lot of money.