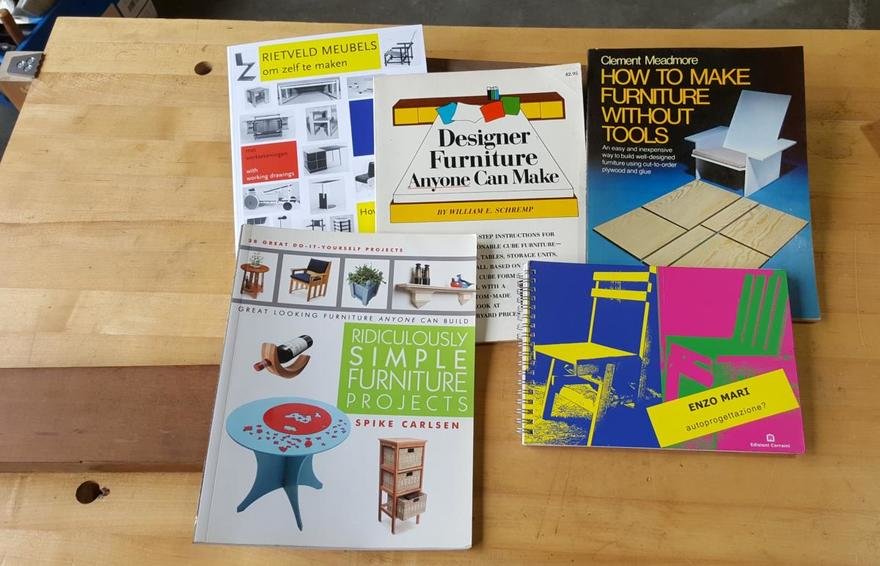 Now that woodworking is no longer regularly taught in schools, young people as a group have a distinct disadvantage compared to the youth of bygone eras when it comes to skills and equipment. (Yes, I know this doesn't apply to everyone. Many customers come to our showroom with their kids, and some of them, even those under 10, have some serious skills.) Fortunately furniture making doesn't have to be off limits to folks (young or old) without a lot of tools or accessories. In Part Three I hinted at some ideas about the future of furniture making without a giant shop. The concept isn't new. Many writers and designers going back to the 1930's basically had the same idea with different solutions. Two books that we stock and another three from my personal collection address this very issue. In chronological order:

My favorite of the bunch is "How to Construct Rietveld Furniture," which we stock. (The first edition came out in 1986; this is the later second edition.) It's still in print and still great. Gerrit Rietveld, like Gustav Stickley and other Arts & Crafts proponents, wanted to design furniture that anyone could make. Unlike Stickley, Rietveld used construction grade lumber, dowels, screws, nails and paint. Nearly a century later his pieces still look fresh and modern. We offer classes in building a version of the Zig Zag chair.Seventy years after it was first introduced the chair looks as modern as ever and isn't a very complicated build. All the designs in his book are like that. The original zig zag chair was made out of solid wood, in the class we use Europly, which is simpler to use. We also use modern equipment for cutting and joinery. Unfortunately most beginners don't have access to that sort of equipment in their home. The original chair was bolted together, and like most of Rietveld designs basically require some sort of handsaw, some sort of drill, and simple fasteners.

Enzo Mari's "autoprogettazione?" originally published in 1974, also wanted to make a visionary's work easy to make. Like Rietveld, Mari used solid wood and common fasteners to hold it all together. Popular Woodworking recently did an article on how to build one of Mari's dining room tables (October, 2018). The tools here are also pretty simple. Mari mostly used solid material so a saw and a drill are the key tools.

I think we have to add in some sanding equipment, which could be as simple as a sheet of sandpaper and a block of wood, to make Rietveld and Mari furniture. A chisel or two might be handy but not essential.

"Designer Furniture Anyone Can Make" by William E. Schremp (1972) isn't a very good book. There are no photographs to convince me that anything was ever actually made from this book. The designs are less a copy of designer pieces, and more a silhouette of the original design. The book is interesting to look at because essentially everything is reduced to a square of plywood, joined using glue and screws. Schremp does talk a little bit about the mechanical considerations of making a sturdy piece but he totally glosses over the details. All of the projects are made out of sheet goods - plywood, and you are stuck with the problem of cutting plywood cleanly unless you have a good power saw of some kind.

"Ridiculously Simple Furniture Projects, by Spike Carlsen is a book we stock. There is a plywood chair project in it that I built and it was a few hours of cutting apart a sheet of plywood. I was impressed. The book unfortunately is mostly about smaller projects and not enough projects to furnish a house, but the author's instincts are good. The chair I built from his plans used a portable circular saw and a jig saw, but I could have done it only with the latter. For the solid wood projects, a handsaw and a drill might be all you need.

Finally, Clement Meadmore's "How to Make Furniture Without Tools" (1975) has a great concept, but I don't think it is practical the way the author describes it. The basic premise is that the book includes cuts lists and layouts for all the projects, and all you have to do is take the plan to a lumberyard and have them do all your cutting. While I don't think any lumberyard can cut wood as precisely as you might need, the idea that all you need to do is glue everything together and paint it shows that the author in the 1970's understood that the urge to build something useful way exceeded the skill level of most people. I don't think just gluing the materials together as the author recommends would last. But the basic idea of the book - namely that outsourcing might be a realistic approach for the future of furniture - is something that is worth discussion, and I plan to explore the idea in a very practical way in the next installment of this series. 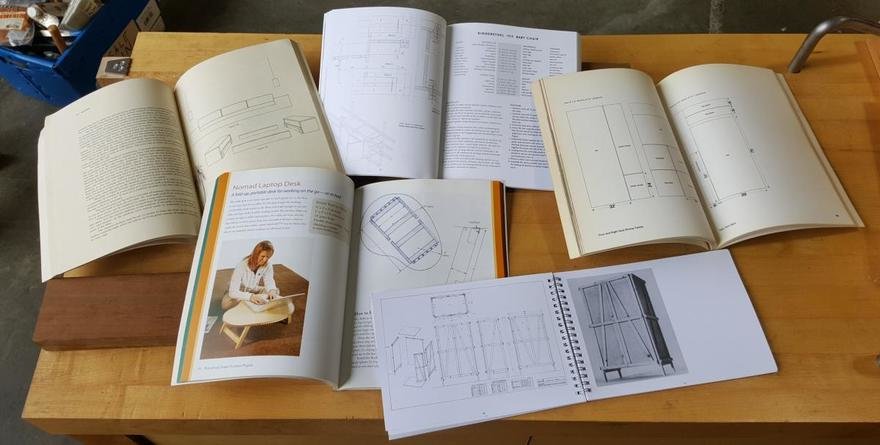