Designism 2.0: Stepping Off Of Milton Glaser's "Road to Hell" 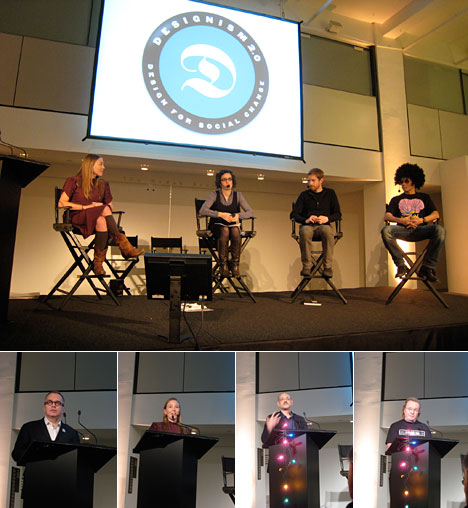 [Ed note: You can now listen to a podcast of the event here.]

Before getting into the details of Designism 2.0, the second annual gathering of graphic designers committed to social activism, please permit me a brief digression. Apropos to the giving mood that comes with the winter holidays (along with the sort of self-promises to turn a new leaf that come with the New Year), I recently engaged in a short conversation with a high profile corporate attorney who bills in excess of $500 per hour. With a smile and a well-meaning heart, she explained to me that she was eagerly giving her time to a soup kitchen for the holiday season. I couldn't resist playing the Devil's Advocate and explaining how unbelievably wasteful such choices seemed to me. Any economist would likely tell her that her decision was counterproductive. If her time was truly worth $500/hour, wouldn't she be far better served donating her legal advice and acumen? Or wouldn't her time and money be equally well-spent working for one hour and then hiring someone else to contribute nearly a hundred hours of work at minimum wage instead?

Scrooge-esque curmudgeon that I am, I went a step further, explaining that I'd far rather have a grocery bagger (paper or plastic?) fully committed to his or her work doing a bang-up job of bagging my groceries than a lackluster employee who explained that he or she was sleepy from staying up all night serving food to the homeless. There can be little doubt that from a strictly rational standpoint the economy does a far better job of allocating resources and capacity than our heavy hearts...but will that sort of behavior let us sleep at night?

It is this sort of ethical quandary that Designism 2.0, held at the Art Directors Club gallery in NYC, was held to address. Bringing together design luminaries such as Milton Glaser with pundits like This is Spinal Tap's Tony Hendra, Designism provided an outlet for graphic designers in search of a cause to come together and fix (some of) the world's problems. Lofty goals indeed.

Designism began with the "SEE" panel, moderated by Alissa Walker, where young Turks Ji Lee and Andrew Sloat discussed projects they'd undertaken on their own accord in helping to shape consumer perception of our sociopolitical climate. Purely self-financed, Lee and Sloat, joined by Ellen Sitkin, explained how they had each successfully brought their design talents to bear in creating political discourse. (For those readers wondering what sort of financial commitment would be required, each of the speakers concurred that they had spent approximately $3,000 of their hard-earned money financing their endeavors. So according to the economic lens I brought to bear as the Devil's Advocate economist above, that meager figure could be taken as the cost of social activism.)

Ji Lee gave a brief presentation on his effort The Bubble Project, which required only the printing of word balloon decals that he pasted on top of subway ads and the like, to allow consumers to express their own opinions of what sorts of witticisms the models in major corporate ad campaigns might produce. Dressed in a "disguise" consisting of a giant fake afro, the puckish presenter provided his audience with footage of him wandering through the city dressed as Santa, festooning his decals on to billboards across the city. Proving deftly that the voice of the people should never be underestimated (neither in its activism nor its wit), it's worth a perusal of his website for to see what sorts of messages the public provided those voiceless billboards. The combination of activism with legitimate public interaction proved to be a highlight of the evening.

In stark contrast, Andrew Sloat produced compelling videos of written messages achieved by rapidly shuffling letterforms printed on t-shirts and manipulated on cue cards to express dissatisfaction with the current administrations' handling of the war and slaughtering of our constitutional rights. Paired side-by-side, Sloat and Lee demonstrated how radically different approaches to graphics and design can serve to educate the public and promote activist messages.

Ellen Sitkin shared her experiences from taking part in Project M in Hale County (covered nicely by Alissa for GOOD mag), showing pictures of bunk beds and project calendars. Things started to heat up when she touched on the "tremendous backlash" from some of the members of community, planting a nice seed in the evening that perhaps positive action wasn't so cut and dried. 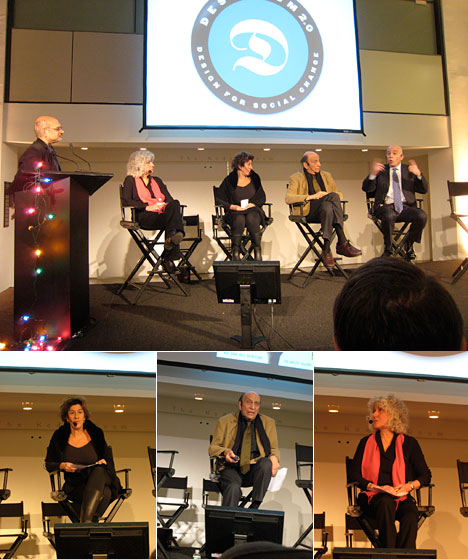 While the first panel exposed the audience to activism without explicitly delving into philosophy, the second panel, entitled "TALK," explored the deeper meaning of activist behavior. This panel consisted of Milton Glaser, Janet Kestin, Liz Resnick and Michael Wolff. The presentations of Glaser and Resnick related directly to activism itself, with Glaser describing and showing his posters and postcards highlighting the conflict in Darfur, and Resnick showcasing the activist work of her students at the Massachusetts College of Art and Design. Rather than working autonomously like Glaser or Resnick, Kestin pursued her goals with corporate backing. Kestin has worked heavily on the Dove "Campaign for Real Beauty" and focused primarily on their Self-Esteem Fund. As an observer of popular advertising, I confess, I have always found something mildly hypocritical about the Dove campaign, which to me felt as though it was saying that women should be comfortable in their bodies however they were shaped, but still needed to shell out money to buy moisturizing soap to look OK. While I didn't depart fully convinced to the contrary, her film for Dove, entitled "Evolution" is a visual marvel. (Look here if you'd still like to duke it out after last night's Q&A.)

Both in design and art, it's easy to imagine the critic or the insider as an insular navel-gazer, and the evening could have become completely congratulatory. Indeed, after hearing Glaser, Kestin and Resnick present, I'll admit to feeling pretty good about myself and about design in general. Ultimately, however, deeper questions remain as to the moral good of all this advertising and selling. Amazingly, for this evening, Milton Glaser, author of the incendiary The Road to Hell for Metropolis was not the firebrand. Instead, that role went to the fourth panelist, Michael Wolff of Vanity Fair, who served to question the value of all this masturbatory self-congratulation. Nattily dressed in a suit with a cleanly shaven head, he seemed almost to be channeling Dr. Evil when he announced to a crowd of graphic designers that "design is officially over." Cue the collective hush.

Setting aside the sort of courage it takes to express such an unpopular opinion, it must be noted that Wolff did, however, make several truly valid points, and even had Glaser agreeing with him for some. Left unresolved at the end of the discussion was whether a veritable arms race was occurring in advertising, such that for any message to stand out, it needed to be louder and stronger than anything that had been said prior. Wolff asked the question that none of the designers in the audience truly cared to address: "Could anything truly new be said, or were we simply barraging a saturated audience with information they already had?" Fortunately, as history will always prove, the truly new was left to be found and rescued by the young. Toward the end of the Q&A a young man at the beginning of his career in design observed that to Michael, the apogee of design had been in the sixties or seventies, when Wolff was coming of age, but that to him, at 18 years old, the design of this era, the design of now, was the genuine article, and that Wolff's suit and even his disagreeability itself were themselves acts of design.

If any conclusion was to be taken away from this event, then, it seemed to me that the design that catalyzed people like Wolff, the young questioner, and indeed the audience itself simply had to be socially inclusive. In the sixties, inclusion could be as simple as "getting it," while in our era perhaps socially relevant design is typified by the Dove campaign where the Talkbacks are full of opinions (good or bad), or Ji Lee's bubbles, where even the passerby can see just how involved the public has become with the issue.

Once again, I find myself as the critic or observer in an awkward place. Teddy Roosevelt, in a speech at the Sorbonne just after the turn of the twentieth century explained what is equally true today, "It is not the critic who counts, not the man who points out how the strong man stumbled, or where the doer of deeds could have done better. The credit belongs to the man who is actually in the arena, whose face is marred by dust and sweat and blood, who strives valiantly, who errs and comes short again and again, who knows the great enthusiasms, the great devotions, and spends himself in a worthy cause, who at best knows achievement and who at the worst if he fails at least fails while daring greatly so that his place shall never be with those cold and timid souls who know neither victory or defeat."

So let no reader think even for a moment that as a critic I can question the virtue of any individual who chooses to step into the arena to do well, whether working in a soup kitchen is all they can spare, or if as a captain-of-industry lawyer they choose to forgo their salary for humbler pleasures. But even as a participant, I readily noticed that by putting designers in touch with needy causes through social websites like Idealist.org that the folks at Designism 2.0 were doing good. And that my particular role, for which I was best suited at least for the evening, was to distribute just that message. 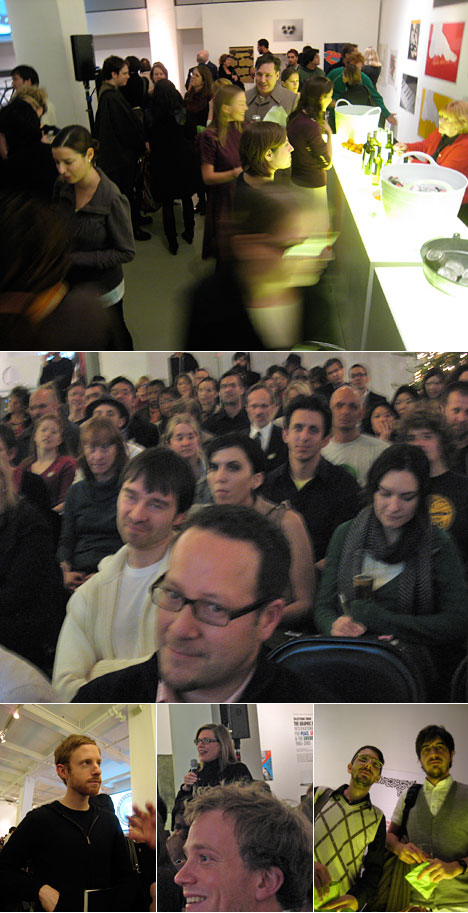 [Ed note: After some participants went to dinner, this police car was found parked outside the restaurant. Notice the bubble. Finally, nostalgic for Designism1.0? Read our review here.] 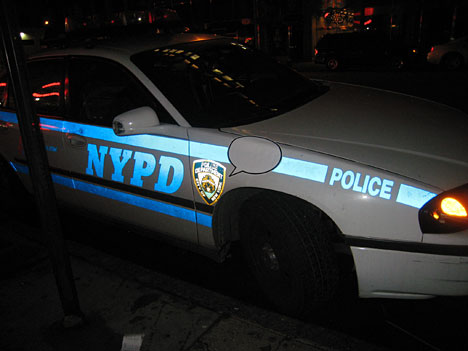