Their app-controlled spherical robot taught thousands of kids to code. The upcoming release expands the possibilities of what they can build. 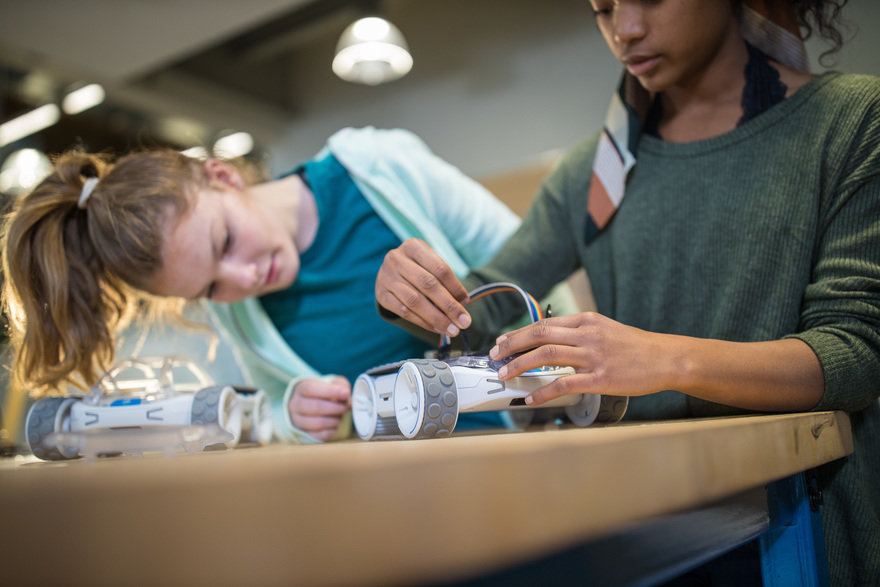 Sphero's RVR prototypes expand on the functionality that made their BB-8 bot a household name.

Late one night in 2015, the Sphero team gathered in their Boulder, Colorado, offices to watch Star Wars Celebration Live, a 30-hour live stream hyping the first new Star Wars movie to come out in 10 years.

The team knew something other fans didn't: this would be fans' first look at BB-8, a lovable new droid character. Disney had licensed their team to make it, but no one had spoken publicly about it. To their surprise, Star Wars producer Kathleen Kennedy jumped the gun and hinted at the toy release in the broadcast.

"Our Twitter started blowing up right away," Sphero cofounder Adam Wilson recalls. "We were like, 'Um, this is gonna be much bigger than we thought.'"

It was. They went on to sell hundreds of thousands of units in just a few days, and the BB-8 toy became the coveted holiday gift of 2015. Wilson estimates that no other company, aside from iRobot, the maker of the Roomba, has made more robots. 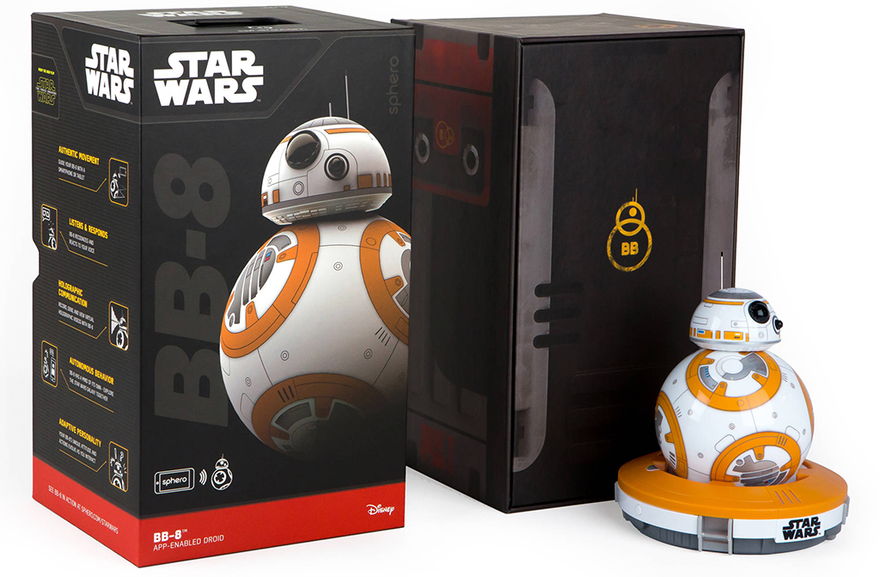 The BB-8 bot made Sphero famous.

The explosion of interest proved to be a crash course in how to make indestructible robots that connect to just about any smartphone. But when Wilson looks back at his first product, he concedes that "all you can really do is turn it a color and then drive it around."

Today, as his team shares a first look at their new RVR prototypes on Kickstarter, Wilson is excited to show how much more his latest robot can do. Newbies can still easily set up straightforward commands, but as they get more advanced, they can also attach and run third-party hardware like a Raspberry Pi, micro:bit, or Arduino, using RVR's durable, reliable engine for creative applications like autonomous metal detection, battle bots, environmental sensors, or place-based musical instruments. "Chances are, if you can hack it, RVR can do it," they say on their project page. 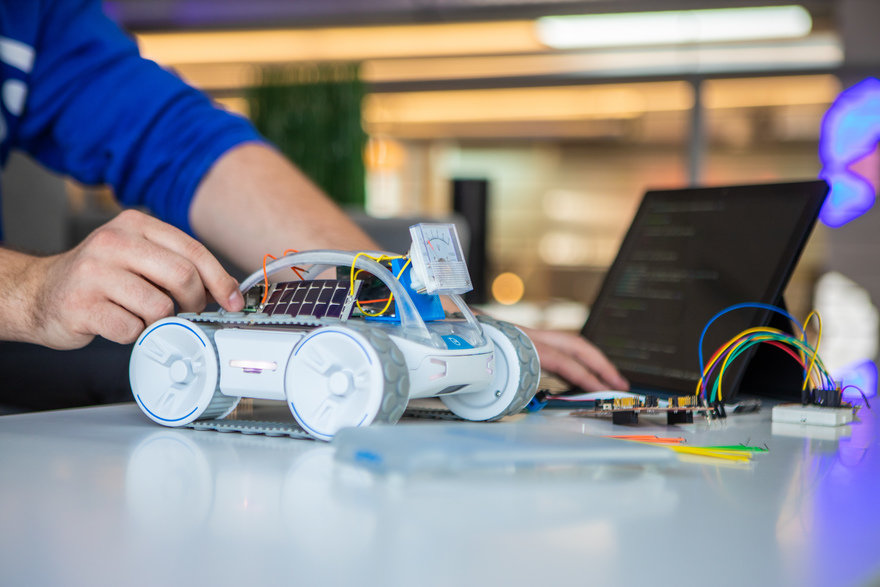 RVR is designed to host a wider range of creative uses.

Born of open-source principles, simplified to be classroom-friendly

When Wilson and his cofounder Ian Bernstein first started work on Sphero in 2010, they knew they wanted to make robots that kids and experts alike could take apart and make their own. "We had this rule that no matter what we did, we would make this product hackable. It had to have an open API. Nintendo and Microsoft, with XBox, they keep everything so locked up. We always wanted to make hackable robots that you could really program."

Smartphones were becoming ubiquitous, and all kinds of "Internet of Things" inventors were experimenting with connecting physical devices to apps. Their concept for the original Sphero bot was a small rolling light-up ball that you could program and direct from your phone. They positioned it as an educational tool and sold it to classrooms in sets of 12.

"There's something really satisfying about that instant gratification where on the screen you say, 'Go forward, then stop, then turn red,' and the robot does that in real life. We saw kids change from saying, 'I don't like technology,' or 'I don't like robots or computers,' to 'I might want to be a programmer.'"

The team had a hypothesis that their earliest models quickly confirmed: most kids don't care about the hardware or software, they want to see what they can do with the thing.

The Sphero Edu app lets users code in JavaScript or drag and drop different functions with block programming, but maybe more importantly, it includes a "community" tab where anyone can share projects and experiments they've run, from lesson plans that teach geography to games built around the colored lights. Teachers have uploaded more than 2 million programs on everything from coding to circulatory systems to color theory to buoyancy.

"We see our robots as a canvas," explains product manager Ryan Burnett. "We're not selling you hammers and saws, we're showing you how cool it is to build your own deck. 'It transforms your backyard! You can do this yourself! And you'll need a couple of skills and tools along the way, but you're building a deck, isn't that cool?' At the end you feel so accomplished."

The Sphero team originally liked the idea of creating a gender-neutral robot that all kids could relate to, explains Wilson. Seeing how most robots are tailored to appeal to boys, he thought it was important to be inclusive. But testing Sphero with kids, the team quickly realized that those who played the longest all had one thing in common: they named their robots.

Luckily, the team didn't have to chew on this challenge for too long. Sphero was part of the Techstars accelerator, a prestigious startup support system that had recently penned a deal with Disney. "We had no idea that when we showed up the first week, we would meet Bob Iger," Wilson says. "He pulled up a picture on his iPhone—he had a model no one had seen before because he's on Apple's board—and he pulls up this picture of BB-8 and J.J. Abrams on set. He was like, 'Could you guys make one of these?' We were like, 'Uh, yes. That's what we do. Robot balls.' We made one that night."

Making millions of Disney bots: a crash course in building for everyone

The Disney deal gave Sphero an adorable—and conveniently androgynous—personality to play with. It also forced them to scale up their production faster than they ever thought they'd need to.

After Disney surprised them with the early announcement of the forthcoming BB-8 toy, Wilson called their account manager and asked how many they should expect to sell. "They were like, 'Well, this is unprecedented, there's never been anything like this… Millions?'

The word 'millions' had not been in the plan for us. It was a quick panic, like, 'Dude, we need to start fundraising this week. How are we gonna buy all the materials to make these?'"

They needed more material, more factories, and more test units for all those factories. They got some fast venture capital funding, and expanded their team of about 40 people to about 160.

Their next concern was quality control for all those units. Fortunately, they had always built the Sphero bots to be durable and simple enough for classroom setup. "A lot of teachers who are now assigned to teach code never learned code in school themselves. When they have a whole classroom of students to guide through lessons, it's disruptive to deal with malfunctions or reassembling broken parts," Wilson points out. They kept the unit simple to set up to accommodate instructors and parents who might not have any robotics experience.

But still, scaling production from a few thousand units to several million forced them to tighten up the product and make it compatible with more smartphone models; even a low rate of error would now mean a tsunami of customer support tickets. "Star Wars forced us to be universal," Wilson says. "We made millions of robots, and we got really confident in our ability to make robots that won't break."

Rolling forward with a new product and hardier hardware

Wilson is glad he started with a relatively simple product. "The crappiest thing about robots is the mechanics part of it, in almost everybody's opinion," he says. "So much of the time, you build something, but once you tell it to move forward, it doesn't go in a straight line."

By the time he made millions of BB-8 robots, he finally felt he had the mechanics down—and he was ready to get more ambitious with a new model.

The team started prototyping the RVR as a more adaptable open-source tool that could let users dream up wilder robot missions, "without getting stuck in the weeds of Kalman filters and loops and all this funky stuff," Wilson says. "RVR just goes right where you say, and it's very simple to deal with."

The prototypes they're putting on Kickstarter have Sphero's impeccable location and movement accuracy, but also add all-terrain tank treads that can navigate arcs, climb inclines, and make precise starts and stops. A color sensor on the bottom lets the robot read and respond to the world around it. And a port hooks up to more advanced hardware like Raspberry Pi, micro:bit, or Arduino boards.

"We intentionally made it look pretty neutral, even though it does have this cute little face, and we put a restrained but diverse suite of sensors in it just to get you started. But we wanted to make a platform that gave the community the freedom to tell us what the robot should be," explains product manager Burnett. "If we're doing our job right, the robot disappears into the background. It's all about what you're accomplishing, what you're creating, or the problem you're solving."

He's started testing it out with Sphero engineers and kids in Boulder, and he's already seen RVR put towards an impressive range of uses: a solar power monitoring device that scouts out the sunniest spot in your classroom or home, a musical instrument programmed to play particular notes as it rolls over different colors of construction paper, a mobile weather station, a safe-box that delivers notes to friends who know the secret code to receive them, a companion who goes to sleep when it senses it's on the color programmed to be its "bed." 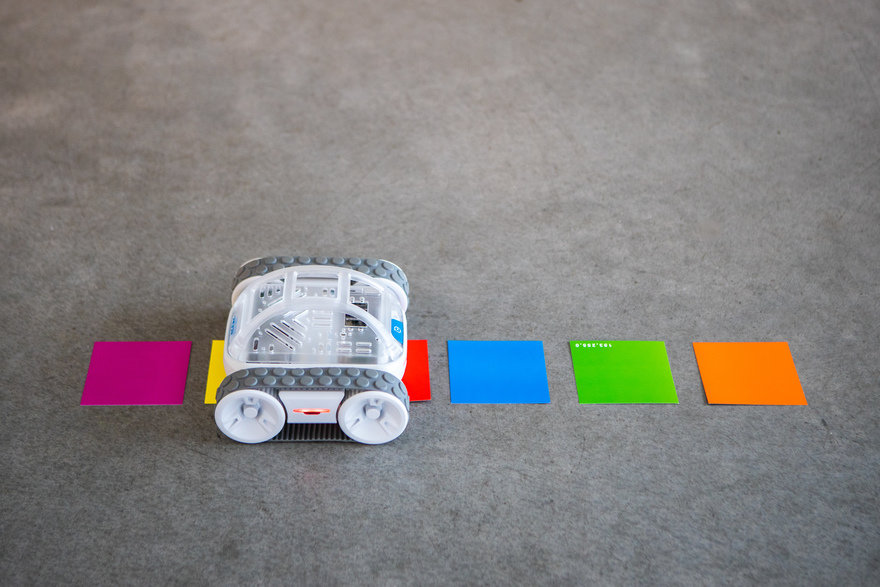 RVR's color sensors allow for creative applications like playing a particular note every time it rolls over a certain color.

RVR will use the same app as Sphero, which has a community tab where users can share all these ideas. And the programs made for Sphero, while simpler than what can be done with RVR, will already be there to get new users started.

"We see people doing crazy stuff with just a robotic ball," says Burnett, "so we're really excited to see what they'll do with this whole world of open hardware."