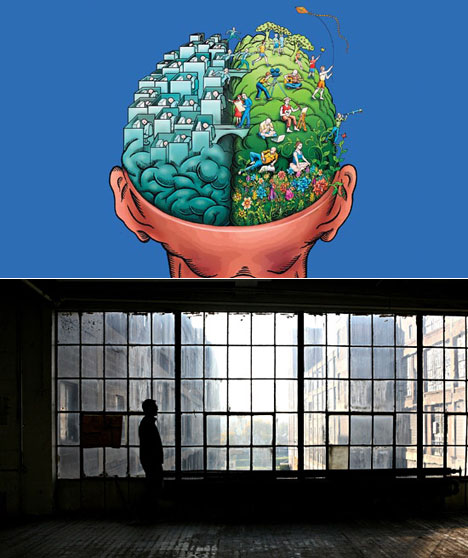 It's a familiar story: pioneering artists and creatives move into an abandoned industrial area, infuse the place with creativity and the life that only the right-brained can bring, and within years you've got a revitalized, hip (and no longer affordable) SoHo, Berlin, Billyburg or DUMBO.

Several years ago, an unexpected snowstorm and a shutdown airport following a Michigan State lecture left us crashing with hippie activists in the depths of darkest Detroit. We were shocked to find a vibrant underground community ekeing it out in bombed-out industrial buildings and recognized it as the model described above, in a very nascent stage.

In the years since, Detroit's creative community has continued to grow, but still has room. There are 1,000-square-foot lofts going for US $550 a month. There are places like the Russell Industrial Center, a 2.2-million-square-foot, World-War-I-era bomber factory containing

Nearby CCS is producing a steady crop of industrial designers, last month the Detroit Institute of the Arts reopened after a $158 million renovation, and last year the Detroit MoCA opened "in an abandoned car dealership [and] received praise from the New York Times for its 'guerrilla architecture that accepts decay as fact.'"

"When we talk to artists from out-of-town, we mostly talk about opportunities that don't exist elsewhere," [said Mitch Cope, artist and co-owner of Design 99]. "You can come to the city, take over land, do whatever you want."

Creatives looking for a fresh start, Detroit is the new Wild West. Read the article the above quotes are taken from here.