Anatomy of an iPhone fake update, from an industrial designer/writer perspective

The supposedly upcoming iPhone update being posted about on some blogs allegedly lets you move icons around, has a Google Maps self-locator, will let you add Safari bookmarks to your home screen, and has been confirmed as "real" by "experts."

Though not willing to stake Core77's rep on this, I can stake my own; I'm 95% sure said update and its attendant photos are fake. Some websites contain technical talk of why this update has to be real, and I can't address that stuff; but take a look at the pictures with me, from the perspective of an industrial designer and writer with a baseline familiarity with Apple design, and I think you'll agree. 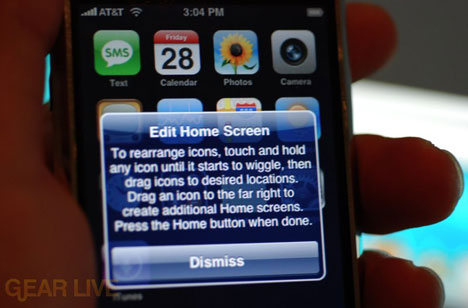 1. The text in the "Edit Home Screen" pop-up is un-Apple-like and wordy. Also, when would this window pop up? Steve Jobs' whole product philosophy is to design things that don't require instructions. The notion that Apple, a company that specializes in minimalist copy, would make you read a pop-up this long every time you performed a fairly routine task seems like it came from someone who uses Windows. 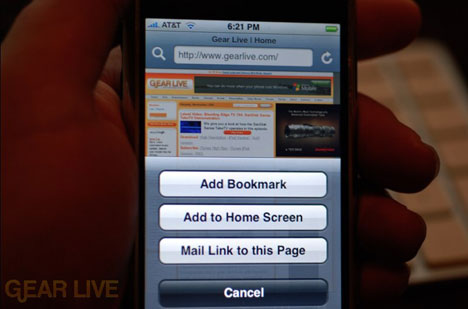 2. Do enough product sketches and you know when the perspective's on and when it's off. Here, it's off and looks poorly Photoshopped. If the topmost screen line jives with the bottom line of the "Cancel" button, it creates an impossible vanishing point vis-a-vis the angle of the phone and the on-screen text. Also note that both words in "Home Screen" are capitalized; in the instructional copy in point 1, it was written "Home screens," with the second word lowercased. The photo's exposure also looks wonky to me, but I'm not a pro photographer (if you are, please pipe up). 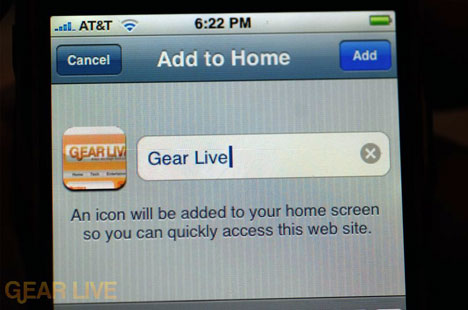 3. The most damning piece of evidence is in this copy: "An icon will be added to your home screen so you can quickly access this web site." Boom, fake. "Website" should be one word, not two. Apple is pretty fastidious about their copy, and there's no way this would make it into a final product. Not to mention the icon at left, a sloppy grab of a portion of the website, that I can't see Apple deeming aesthetically acceptable.

Sure, it's possible that the gaffes in points 1 and 3 are just test copy inserted by an uneloquent Apple software engineer, and that the perspective in point 2 is correct and I've just got a bum pair of peepers. What do you think?

Addendum: Last night I was contacted by Andru Edwards, the owner of Gear Live, the guy who posted the original entry I'm questioning above, and the apparent owner of an iPhone with the 1.1.3 update... Although Edwards refuses to disclose how he acquired the update, he swears it's real and was somehow updated through iTunes. Edwards allowed me to interrupt him working on posting a video of the update for a brief interview. (If it turns out it's real, I'll withdraw my application for a private investigator's license...I might still be able to get the fee back.)

How do you explain the copy errors? "Web site" rather than "website," "Home Screen" alternatively capitalized and not capitalized. I cant answer that either. I mean, that is what it says. I didnt write the firmware or anything.

How do you explain the "off" perspective in the photo? LOL. Again, I have no idea. I used a Nikon D80 with an AF Micro Nikkor 60mm macro lens. I suck at taking those shots, and they cause blur outside of the center focal point. So I can't really explain why they look [perspective-inaccurate].

Do you know when the software update is coming out? No clue. I am assuming Macworld (January '08) but that is not based on anything other than a hunch.

The complete list of features in this new update is: 1. Google Locator 2. Multiple addressee text messages 3. Ability to move icons on home screen 4. Add Safari bookmarks to the homepage

So far. I didn't get a list, so it's just me finding things as I go.

Anatomy of an iPhone fake update, from an industrial designer/writer perspective