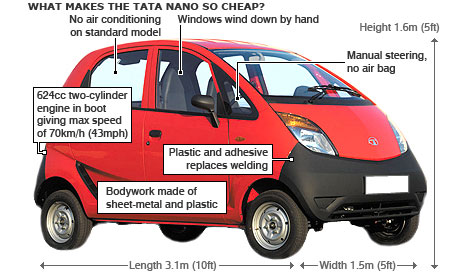 That there is the Tata Nano, the spiritual successor to the original Volkswagen Beetle. With manual steering, a sub-one-liter engine and wheels the size of dinner plates, the "People's Car" from India was designed not for aggresive performance, but for aggressive economy.

How aggressive? The Nano gets 50 miles to the gallon and will retail for roughly $2,500--the same price as the DVD player option on a new Lexus, as one reviewer drolly noted.

While the diminutive car will most likely not meet U.S. and European safety standards, it wasn't designed to compete with cars in those markets; it was designed for people whose previous form of transportation was connected to their ankles. Tata expects an annual demand of one million cars. As the so-called "other half" gains access to automobiles, what will be the impact on the transportation design field?