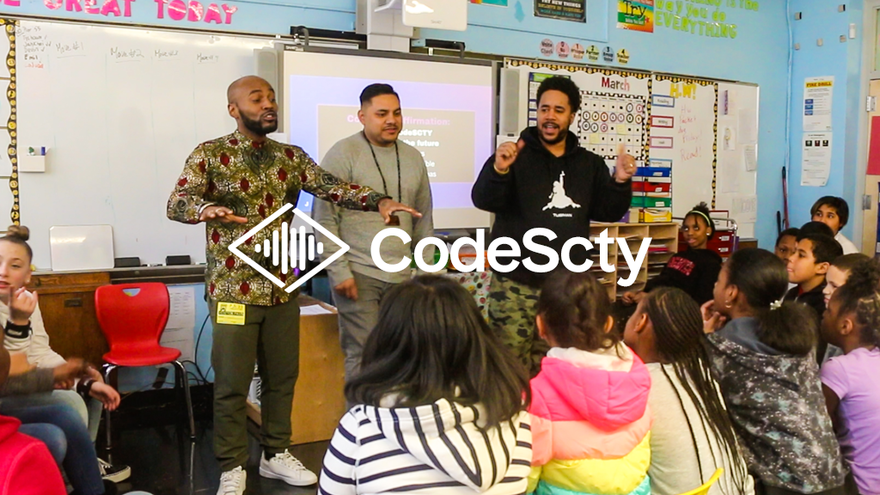 "Say your ABCs," Armando Somoza says. "It's usually in song form, right? Across countries and languages, we've seen the power in this mnemonic device, the power of call and response, the power of communal, creative learning experiences."

Somoza and his cofounder Chenits Pettigrew have been artists and educators for nearly 20 years, and have long wondered why technology training programs so often ignore the simple structure that informs so many language classes.

"As an artist, I don't look at my music as just a producer and vocalist," says Pettigrew. "I have to understand the power of video, social media, and technology. I think it's the same in education, but math and science classes are usually a little bit dry and dull, because they're put in this separate category."

The pair hope to help solve that problem with CodeScty (pronounced "code society"), a music-based curriculum with an original album, music videos, and a forthcoming app that make hip hop a vessel for teaching computational thinking.

A radical idea: create a curriculum that takes culture into account

"I'm a hip-hop MC by trade," says Pettigrew. "I started doing that when I was about 15 years old. When I came back to Pittsburgh, Pennsylvania, after undergrad, I found a job doing gang prevention in schools. One of the things I noticed right away was that young people weren't seeing themselves represented in their coursework or educational material.

"I was fortunate to know a lot about my history as an African-American man, and to have parents who were educators, so I began to share that with the students through music. I would use hip-hop references, or actually create songs around specific subject matter that would be relevant to them, and it lit them up. I had never seen anything like it, so I knew there was something there, and I continued to push it and pursue it."

Within a few years he was studying music, art, and activism at NYU, starting music production and licensing companies (most notably Soul Science Lab, which programs ambitious projects like an orchestral and documentary retelling of the African American experience), and taking jobs at art education institutions.

It was at one of these arts education jobs that he first met Somoza. "We have a very similar upbringing—both my parents were professors and our conversations around the dinner table were about culture, politics, society, and people," Somoza says. "And we had similar professional experience as well." Their combined training spanned music, visual art, media production, dance, and coding, but always came back to the themes of education and social change. 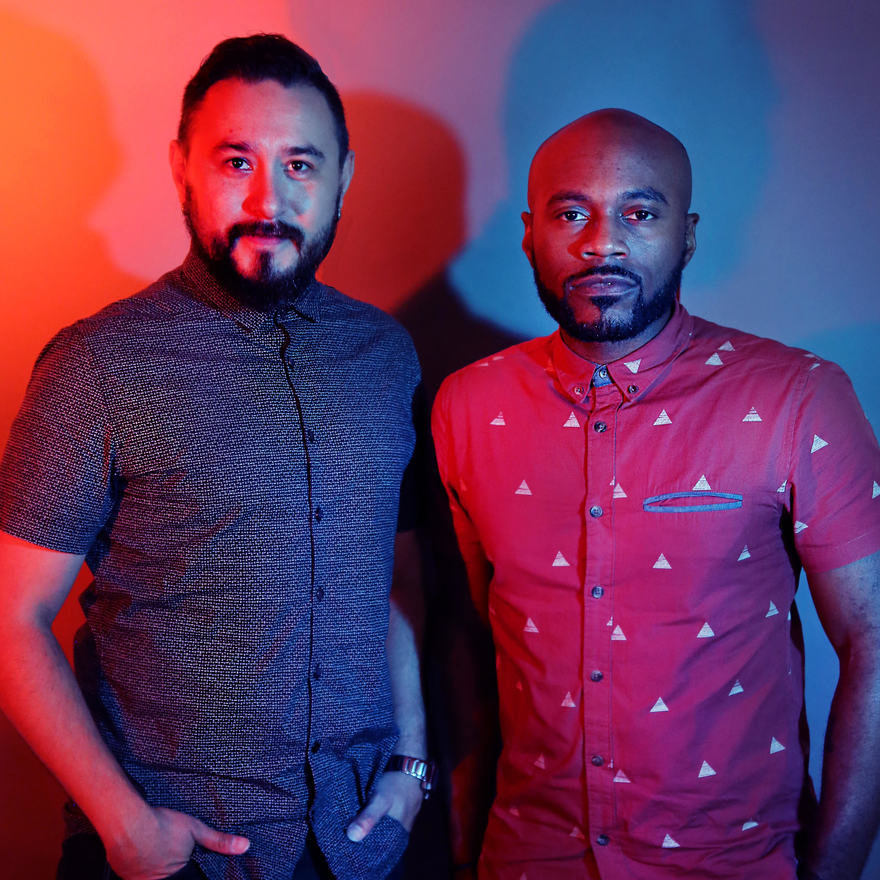 Somoza and Pettigrew, cofounders of CodeScty.

Pettigrew and Somoza worked together at a nonprofit where they created a preprofessional program that taught high school students skills like advanced media production, music production, coding, and game design.

"Our curriculum included music and animated videos and activities that were what we call 'culturally responsive'—integrated with the cultures of the communities we serve and designed to resonate with those young people," says Pettigrew. "We had incredible success with that."

But the team still ran into many of the problems that are common at nonprofits. "We're enterprising minds," says Pettigrew. "Seeing the success we had in creating original music and materials, we also saw opportunities to bring them to market in a bigger way. But that was a very difficult ask in the nonprofit space. There were constraints that limited how we could grow it. So we said, 'Actually, we need to step out of this space and figure out how we can continue this work on our own.'"

The pair quit their jobs and started working on building CodeScty as a standalone set of resources and tools for educators. As they started testing it in New York City schools like PS33 and educational programs at companies like Google, they came to realize that code education ignores an even more foundational element of teaching kids about technology: computational thinking. 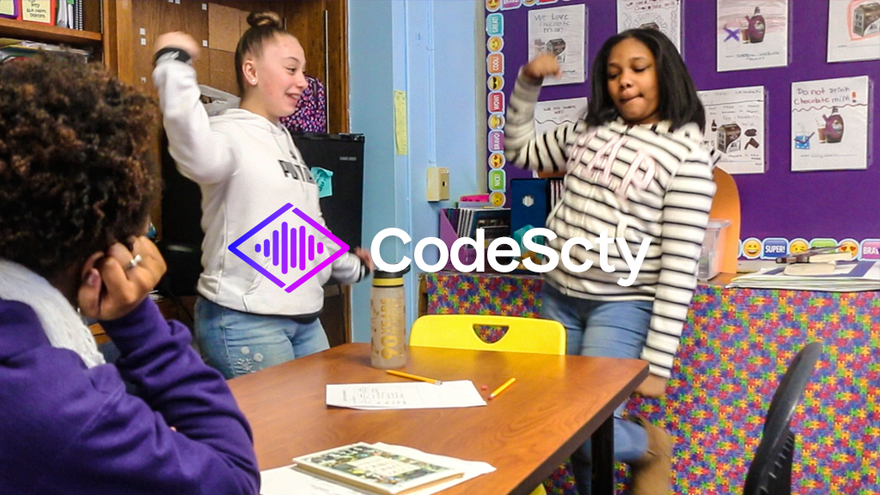 Students from PS33 defining the dance steps to their dance challenge algorithm.

"Teaching code is actually not the way to engage young people," Somoza says. "If you're trying to learn a new language, just memorizing vocabulary isn't going to get you there. If you land in France with all your memorized words, it's going to be difficult to make meaning. The context, the cultural context, and how words allow for interaction is an entirely different skill set. That's why Rosetta Stone, and Babbel, and all these language tech platforms start with cultural contents and words that relate to experiences like dining or art."

The cultural touchstone CodeScty focuses on is hip hop. "There are 17-year-olds who struggle with science, but memorize every single word on the last Cardi B album," Somoza says. "So imagine the power of using that as a mechanism to communicate the concepts that they have struggled to learn."

"One of the main lessons we've been teaching right now is around the concept of an algorithm in the context of a viral dance craze," says Pettigrew, giving an example of CodeScty's approach. "An algorithm is simply steps in a sequence that produce a desired result, like a dance. So, let's look at one of Drake's recent dances, the Kiki challenge, and what made that dance craze go viral. What were the elements, from a hashtag to a celebrity endorsement, and how does a platform like YouTube's algorithm turn that into an international viral sensation? It's about entry points that make this all more relevant."

A lack of diversity, and a lack of perspective, have made tech toxic

Teaching tech through a cultural lens is important to Somoza and Pettigrew because they see such an incredible disparity between kids' capacity for making content and their ability to shape the platforms that host it—and they think that divide contributes to the widespread challenges Silicon Valley struggles with today.

"Look," Somoza says, "there's no secret that there's a lack of diversity in technology. It's 2 percent African-American professionals and 3 percent Latinx professionals in the field. And these young people creating and consuming culture online don't know how the systems work. There is a tremendous discrepancy between who uses the platforms and who really understands the architecture."

Traveling the world, Pettigrew says he's always struck by hip hop's global import, and frustrated that the young people behind it get so little for their work. "All the kids—everywhere—are training to be like the young people we teach here in Brooklyn and Harlem," he says. "Everyone is trying to replicate what's happening here, but these kids never benefit from the distribution of their images, likenesses, ideas, and intellectual property on these tech platforms that generate exorbitant wealth from it. We're trying to help young people understand that they can create the means of production."

To discuss these issues, CodeScty talks to students about four levels of digital power: users, producers, developers, and architects. "On Snapchat and TikTok and all these platforms, they're consuming content and, thankfully, learning how to produce their own," Pettigrew says. "But very few students know how to develop their own tools, and we even want to go a step further and teach young people how to architect and how to imagine new possibilities for technology."

"Especially since 2016, across the country and around the world, we've all been asking about the ethics, morals, and values of Silicon Valley," says Somoza. "When you hear the cliché that 'the young people are the future,' the young people are the future. Period. Making these skills accessible is an investment in equity, in representation. People who are interested in the future of our country, our institutions, our markets, our everything, need to pay attention and invest in opportunities in this space."

CodeScty is live on Kickstarter through April 20, 2019.