Siphoning the perfect cup of coffee 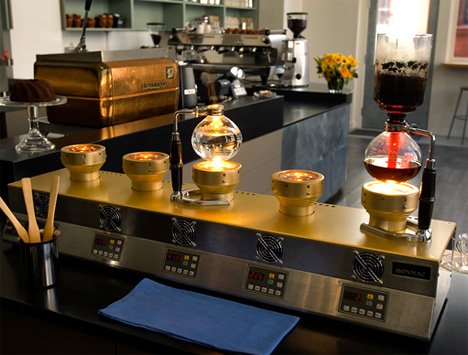 Siphoning works for stealing gasoline and moving cash into secret bank accounts, but it's apparently the way to go if you're searching for that perfect cup of coffee. The Blue Bottle Cafe in San Francisco has recently acquired a $20,000 imported Japanese siphon bar (above) after years of attempts. This halogen-powered coffee contraption is currently the only one of its kind in the U.S. The high-tech, $11,000 Clover siphon brewer makes only one cup at a time but depends way less on the barista than the aforementioned siphon bar, resulting in a consistently tailored cup every time. There are about 200 Clovers around the world but Starbucks just bought 2, so if you're a fanatic now, prepare to feel less special.

Designed by three Stanford graduates, it lets the user program every feature of the brewing process, including temperature, water dose and extraction time. (It even has an Ethernet connection that can feed a complete record of its configurations to a Web database.) Not only is each cup brewed to order, but the way each cup is brewed can be tailored to a particular bean -- light or dark roast, acidic or sweet, and so on.

Siphoning the perfect cup of coffee