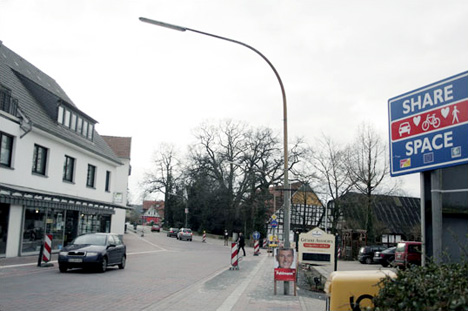 "If you're faced with a traffic signal, you don't have to think anymore," says Ben Hamilton-Baillie, a leading Shared Space advocate based in Bristol, England. He's discussing the new shared space policy to be implemented in the small German town of Bohmte, where sidewalks, traffic lights, signs, and road markings were removed in hopes that pedestrians, bicyclists, and drivers become more vigilant by being forced to pay attention.

The shared streets are not meant to replace every road, but reworking downtown thoroughfares has already succeeded in the Dutch town of Drachten. That Shared Space municipality got rid of almost all its stop lights a few years year ago. Most street signs are gone, and big intersections have traffic circles. Accidents have fallen by 50 percent since the program started, city officials say.