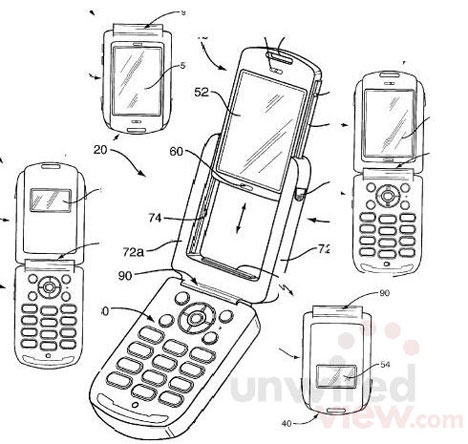 That there is a new Sony-Ericsson patent drawing for a modular cell phone:

As described in a patent application called "Detachable Housings for a Wireless Communication Device," mobile phone has two detachably connected housings. One of them can hold user interface devices such as keypad, keyboard, touchpad, joystick control, etc; for data input and control. Other things, such as GPS receiver, microphone, camera and battery go in there, too. The second housing will hold a display with some user input buttons and all the necessary phone circuitry, application processor and memory, another battery.

When separated, both housings communicate with each other via short range communication module, e.g. Bluetooth. What's more, the housings are designed so, that they can be joined in different orientations. E.g. with the main display on the inside or outside of the clamshell phone, when closed.

We're not sure where, practically speaking, the design wisdom fits in here; are we consumers meant to assemble the phone we'd need for a given day on that morning, like a sniper screwing his rifle together before an assignment? Or would we carry all of the components around in a bag and swap out on the fly? Either way we're curious to see what the finished product looks like.