The kotatsu: a different way of thinking about tables 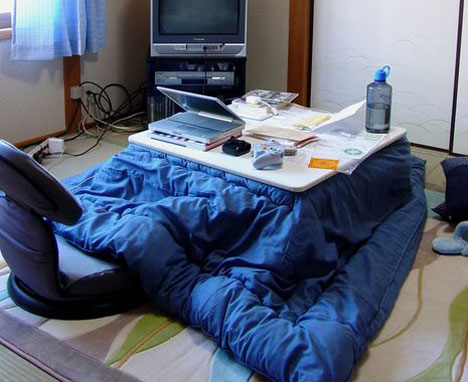 At a recent dinner party in NYC, our Japanese host set out a kotatsu, a type of low table not commonly sold in the US; in fact, it was the first time we'd seen one outside Japan. (Our host had lugged it through Narita and JFK.) As the ethnically-mixed company arrived, every Japanese guest expressed delighted surprise at the table's appearance and eagerly took turns manning it. All of them had grown up with one and maintained a warm (no pun intended) connection with it.

So what is it? The kotatsu looks rather like a coffee table and is comprised of four parts: 1) the wooden structure, 2) a heating element that hangs in the center of the structure, 3) a heavy futon blanket, and 4) a tabletop that sandwiches the blanket between itself and the structure. 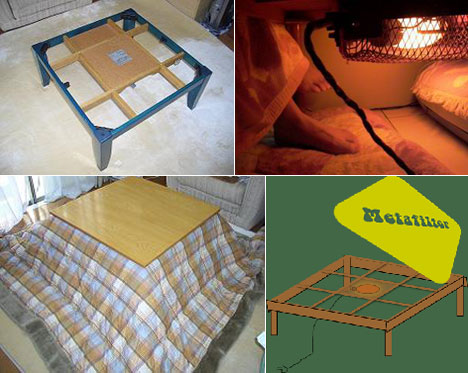 The user sits at the table (on the floor--remember, it's coffee-table height) with their legs under the blanket, which traps the heat underneath the table. In Japan, where houses are often built without insulation and central heat due to the frequency of earthquakes and the problems those things provide, a kotatsu may be the only source of heat in the house. 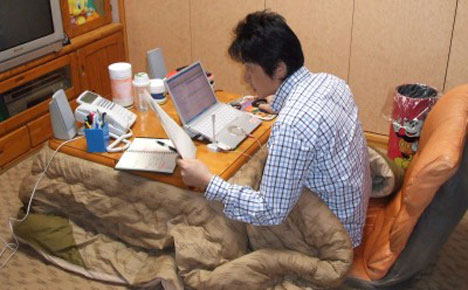 A friend in Japan explained to us that keeping the bottom half of the body warm while the head and torso remain cool provides mental clarity, which is good for working, as opposed to the tendency to doze that can come with full-body heat. 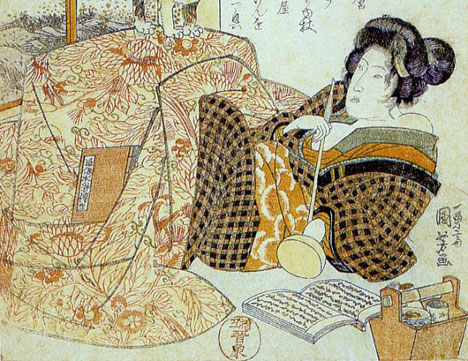 But we'd also read that the kotatsu was designed hundreds of years ago (with charcoal, not electricity as a heat source, obviously) during a time when the Japanese wore loose, flowing clothes; the heat would enter the wearer's clothing at the bottom and exit through the neck opening, thus heating the entire body.

As we've said before, kotatsu are not terribly easy to come by outside of Japan; but they're simple enough to make on your own. And while the design of the table is not explicitly informed by earthquakes, we do find it an interesting solution vis-a-vis its environment.