Roland Lamb is finally tuning in to the needs of newcomers, casual dabblers, lapsed pianists, and experts alike

When he read the email, Roland Lamb assumed it wasn't really from Herbie Hancock. The follow-up call confirmed that it was. Hancock wanted to try the Seaboard, a futuristic piece of super-piano hardware that Lamb had started developing at London's Royal College of Art.

Lamb, whose father is a jazz musician, has been playing piano since he was two or three years old. When he set out to make a digital keyboard that could push piano into new realms of musicality, he had expert players like Hancock very much in mind. "With some of his electronic music, it seemed like he took the keyboard to this new, incredibly expressive place," Lamb says. "'Chameleon' and stuff from his Headhunters album was a direct point of inspiration for me in creating Seaboard." Watching Hancock play those songs on a Seaboard in his L.A. studio was elating.

But Lamb's deeper interest has always been to make music technology for everyone. "I wanted to build a smooth and seamless on-ramp to music-making, but I knew that to make a low floor, I had to start with a high ceiling."

With LUMI, live on Kickstarter now, Lamb is finally tuning in to the needs of newcomers, casual dabblers, lapsed pianists, and experts alike. The LUMI app will stream your favorite songs and light up the notes to play on the small keyboard, which is designed to snap on to other sets for an expanded instrument once you master the basics. 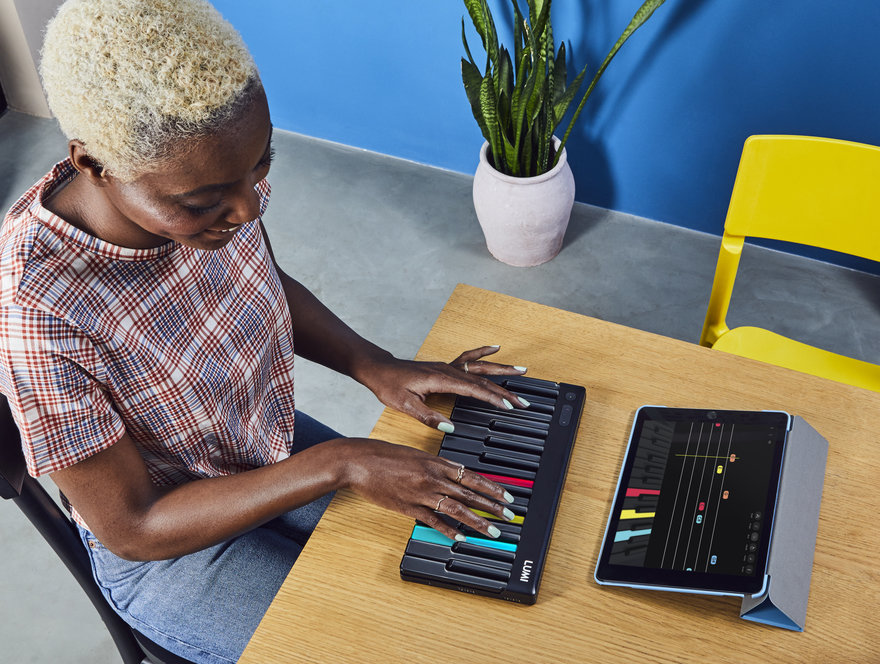 The LUMI keyboard from ROLI

Seeking inner peace, Lamb discovered the depth of his connection to music

Before Lamb started building the Seaboard, he thought he might be a Buddhist monk. He bought a one-way ticket to a monastery in Tibet and learned its disciplined routines. "When I say they're really strict, I mean every single thing that happens is regimented, like how you pick up your chopsticks or how you pick up your bowl," he says. "You have to follow really detailed rules."

Part of that meant selflessly renouncing personal possessions. If your family sends food, you're expected to share it with the group, even if you might be tempted to hide it away. "Everyone had their little worldly things that were harder to give up," he says. "For me, my one secret was that I had this minidisc player. I'd listen to many of my favorite albums on it. Very late at night, I would get under the covers and listen to music. That was my forbidden pleasure."

He ultimately decided he couldn't reconcile his deep love of music with the monastic lifestyle, but he carried the Buddhist spirit of human connection into his instrument-making philosophy.

"One of the things that attracted me to Buddhism is the idea that enlightenment is a collective activity that you can practice individually," he says. The creation of new music technology isn't such an unrelated pursuit. "Music is a powerful technology that has developed over two million years, closely connected to the evolution of language and altruism," Lamb says. "It rolls into our deep cultural membrane, our DNA. So for me, in terms of the impact that playing music can have on one's emotional state and ability to express oneself, to find new entry points into the world of music is a wonderful and exciting thing."

Lamb started thinking about how a new instrument could create these types of experiences, and he ended up in a Royal College of Art PhD program, exploring the history of the piano and designing a new one for the digital age. His work would lead to the formation of his company, ROLI, and its first product, the Seaboard.

"Look at fields like photography," he says. "Thirty years ago, it was a very elite hobby to set up a darkroom and learn how to edit and then publish your photographs." Needless to say, a lot has happened in photography over the past 30 years, and Lamb realized that to create something as democratizing as, say, Instagram, he needed to build his credibility with a product more like a DSLR first.

"We had to start at the top and work our way down," he says. "First we built instruments that were for professionals, that really push the envelope in terms of sound. If we started with a toy, it would be hard to turn that into a professional music production system. We'd kind of be known for making musical toys."

So he launched the Seaboard, a digital keyboard with rubbery keys that give experienced players more control over a wider range of sounds, and followed up with iterative models that improved playability and introduced portable modularity with snap-together sets.

The experts were just the beginning

"Seaboard was really about saying, 'Can we improve upon the piano by making it more expressive and adding different layers of orchestral control?' LUMI is about improvements that make the piano much easier to learn, more fun to play, and more accessible for those just getting started," Lamb says.

He went back over his PhD research on the history of pianos, this time looking for opportunities to make them more egalitarian. "Even the basic concepts, like music notation, haven't really evolved," he says. Instead of forcing students to learn how to read music, LUMI will feature illuminated keys that express patterns more directly. Instead of the standard key widths created for adult male hands, its slimmer design will make octaves easier to reach. And like precursors to the piano, it will light up all the notes in a scale that naturally sound good together instead of forcing an in-depth knowledge of 12-tone music theory.

Most notably, its connected app leverages the never-ending library of streaming music that features piano, made possible through the company's relationships with Universal Music Group and Sony. "That emotional connection that you have with music is really important to nurture and sustain in the learning process," says Lamb. "If I like Drake, but I'm trying to learn piano and I'm only playing Beethoven, it doesn't connect with me emotionally the same way."

As students get comfortable on the small, manageable LUMI board, they can snap it on to another to make a larger instrument. "We were trying to make something that would be really easy to play but would also be expandable—a bite-sized thing that doesn't feel imposing," Lamb says. "When you walk up to an upright grand piano, you can feel dwarfed by that. You can feel overwhelmed by all the possibilities if you don't know what to do. It can be diminishing. With LUMI, you start small. You have this nice, portable, intimate palette to begin with, and if you want to build a larger instrument over time, you just click the pieces together."

"This is a new instrument, in a way. It's a new interface," he says. "But it's very close to what is perhaps the most important and most popular instrument of all time. In that way, it really leverages a lot of the culture that already exists in the world."