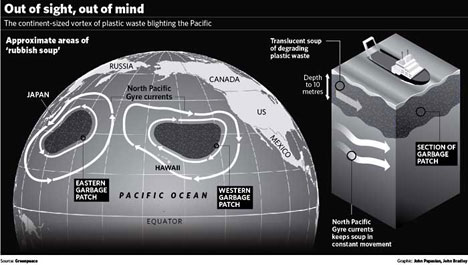 It's not exactly a Leif-Ericson-class discovery in terms of positivity, but it's important nonetheless. Oceanographer Charles Moore was on the high seas between Hawaii and the US mainland when he drifted into the "'North Pacific gyre'--a vortex where the ocean circulates slowly because of little wind and extreme high pressure systems. Usually sailors avoid it. What he found was revolting:

He was astonished to find himself surrounded by rubbish, day after day, thousands of miles from land. "Every time I came on deck, there was trash floating by," he said in an interview. "How could we have fouled such a huge area? How could this go on for a week?"

This "garbage continent" is apparently twice the size of the US landmass, and was formed from garbage both shipborne and dumped from land. Even worse, it's more malevolent than just a bunch of floating rubbish--it's decomposing into a kind of toxic soup, and it's due to double in size over the next decade. Read the unbelievable tale here.