Apple, Google, Microsoft, and Hewlett-Packard are just some of the most famous tech companies to come out of garages. They're far from the only ones. The garage is a near-ubiquitous fixture of Silicon Valley culture, and has grown into a symbol of experimentation and invention. Good luck finding one in crowded Chinese metropolises though.

That's part of why Rockets Xia has helped develop Mushroom Cloud Maker Space in Pudong, Shanghai. Since 2013, the informal gathering place for inventors with similar interests has grown into an essential resource that's helped launch products from the OverLord 3D Printer to homegrown quadcopters to the HuskyLens AI camera, live on Kickstarter now.

Creating a community for makers

"At first, we just gathered together because our interests were the same," Xia says. "Later, we saw that, in China, because of our housing conditions, many people lacked a space like Americans' garages, so we found a way to build a space where we could share our tools and talk about our projects."

More than 10,000 visitors have attended workshops and courses hosted by experts in robots, 3D printers, CNC, electronic skateboards, laser keyboards, and more. They get technical support and supply chain analysis from DFRobot, a prolific product studio that cofounded the space with Xia and later hired him.

"We hope that we can be like a nuclear reaction, spreading the maker culture like a chain reaction," Xia says.

A hivemind raises the bar, and lowers the barriers to entry

From running the space for more than five years, Xia has seen how bringing together like-minded makers raises the quality of everyone's work.

"When you run into issues, there are other makers to help you think about various solutions," he says. "If you don't understand a certain technology, there are people to help."

The conversations are honest—sometimes painfully honest—but the open and constructive dialogue helps build stronger products. "Our members are enthusiastic testers," says Xia. "Their feedback can be harsh, but the best evaluators are sometimes the ones who criticize you the most—the worst feedback is no feedback."

Mushroom Cloud's biggest achievement might be cultivating a community that is invested in making hardware more inclusive, rather than one-upping each other. "I am most proud of the fact that we have always had the most interesting and exciting projects, dedicated to lowering the user threshold, allowing more people to access the latest technology, and making our lives better," Xia says. "We encourage our members to create projects that benefit more people."

One particularly strong example of how the community supports tech for more widespread use is HuskyLens. DFRobot couldn't have developed the AI vision sensor that recognizes faces, objects, lines, movements, and colors without input from Mushroom Cloud residents. 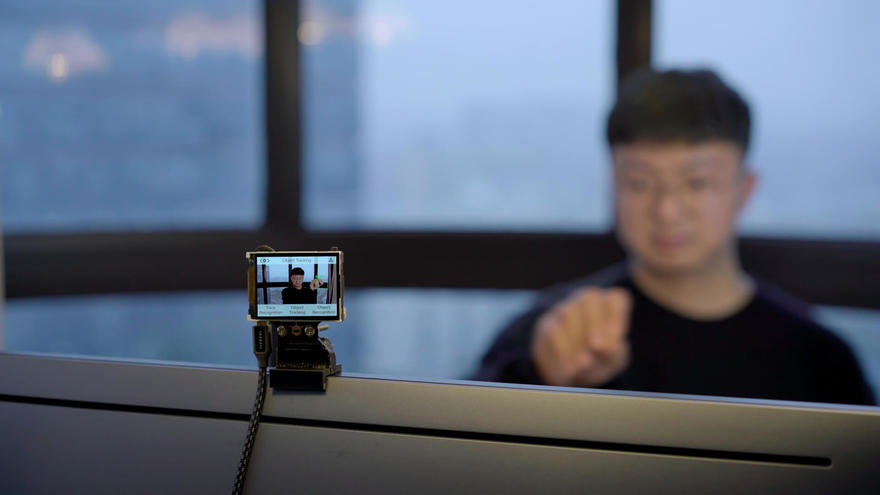 The HuskyLens is easy to set up, so makers can get right to inventing applications for robots, face recognition, interactive art, and more.

"HuskyLens brings the most frontier machine vision to the hands of developers and even rookies, making it easier for them to develop the projects they want," Xia says. The camera is for tinkerers working with Arduino, Raspberry Pi, LattePanda, or micro:bit to create autonomous vehicles, interactive art, upgraded cameras, and more without getting into the weeds of AI algorithms.

"Ten years ago, many robot parts were very expensive. With the development of the open-source movement and maker culture, we realized that sharing hardware and technical knowledge would help us make a better future, so we are starting to offer lower-threshold robot accessories."

HuskyLens product manager Youyou Yu explains that about a year ago, the team started looking at how they could make AI vision easier for more makers to experiment with. Earlier tests with technology like OpenTLD, an algorithm based on open-source libraries, had been unsuccessful; new specialized K210 chips offered faster processing for running neural network algorithms without demanding too much specialized knowledge from users.

"HuskyLens emphasizes the process of learning," Yu says. "By learning, it adapts the user's usage scenarios better than a common model algorithm. We hope that our users can solve problems by making more meaningful applications through such sensors." 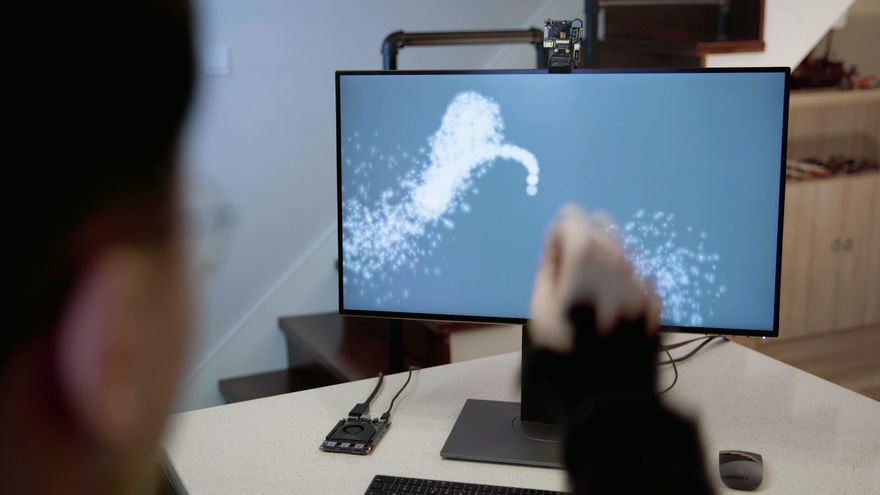 Motion tracking with the HuskyLens.

And of course, they've tested their ability to do this with their neighbors at Mushroom Cloud. "We have had extensive conversations with members of the maker space to understand their needs and problems, and we've learned about the limitations and possibilities of current machine vision technology through discussions with people doing similar projects. In fact, that was how we learned about the K210 chip," Yu says.

The team can see which features will be popular, like that the sensor can integrate with three or four functions like PixyCam or OpenMV, and which parts needed improvement, like the accuracy and ease of the set-up. Their next step is to open units up to the Kickstarter community to start building with.

HuskyLens is live on Kickstarter through September 7, 2019.