Out of Office asks: "If the office is no longer spatial, what has it become?"

"If the office is no longer spatial, what has it become? Where work and life are conflated, what is the relationship between the office and identity?" These are some of the questions posed by Out of Office, an exhibition exploring the evolution of the office from 1950 to a speculative 2050. Taking place at A/D/O—a fitting venue to explore shifting paradigms of work—and co-curated by Andrea Hill of TORTUGA Living, Alex Gilbert, and Soft-Firm, the exhibition tracks "the feedback loop" between design, technology, and the office. 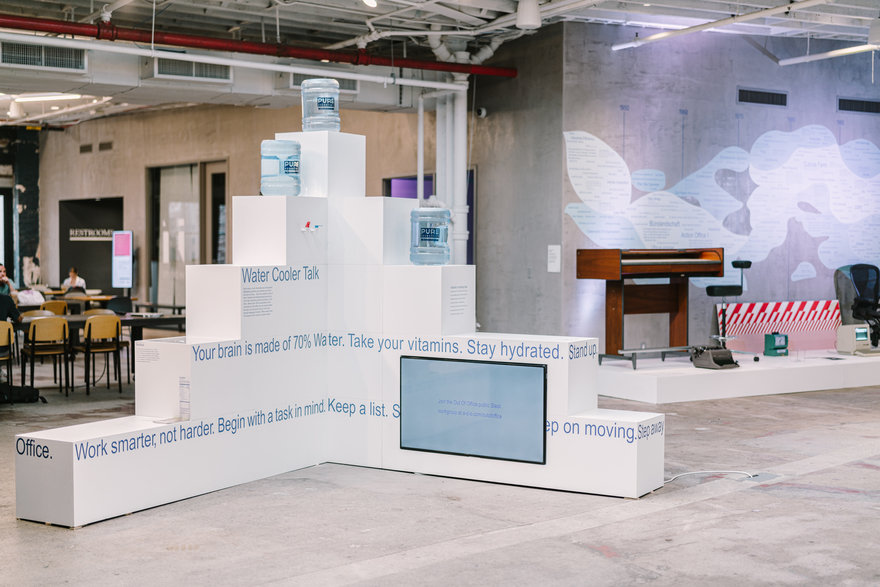 The show is comprised of four installations. First upon entering, the interactive Water Cooler Talk places the ubiquitous conversation starter next to a live feed from a Slack group to suggest how "the symbolic heart of the office" has shifted, while phrases like "Step away" and "Work smarter, not harder" remind us of the negative repercussions of our always-connected culture. 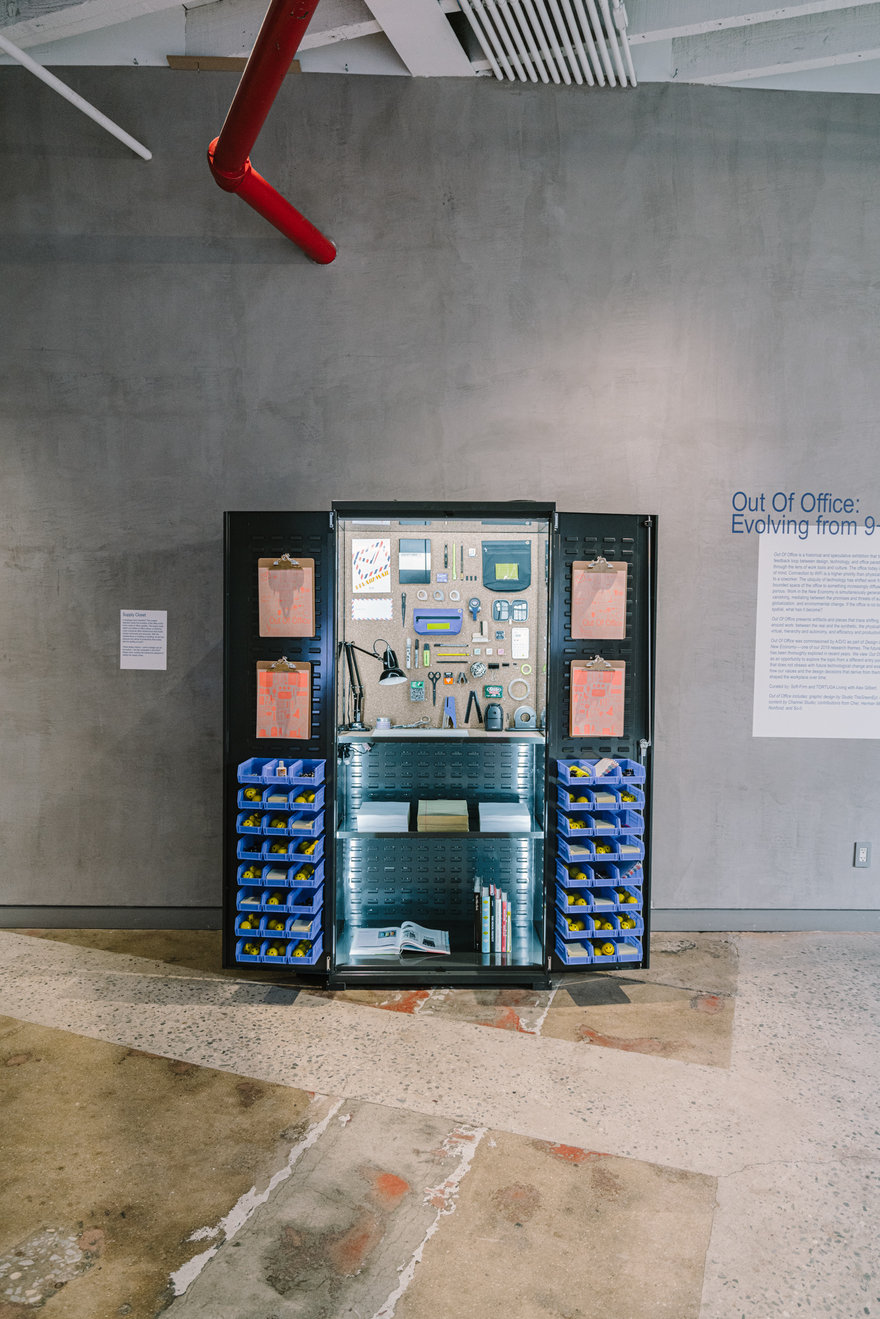 There's a sense of what we're losing in The Supply Closet as well, which showcases an array of office supplies, many of which are now nostalgia-inducing. "It's rare that we interface with anything other than a computer these days," the curators told us in a recent interview. "What would it take to reinvigorate our senses and make for more inspiring modes of communication and creation? Can something as simple as receiving a letter in the mail help diminish our digital fatigue? We believe that the manual tools of work can continue to spark productivity even as they become less directly tied to our output." 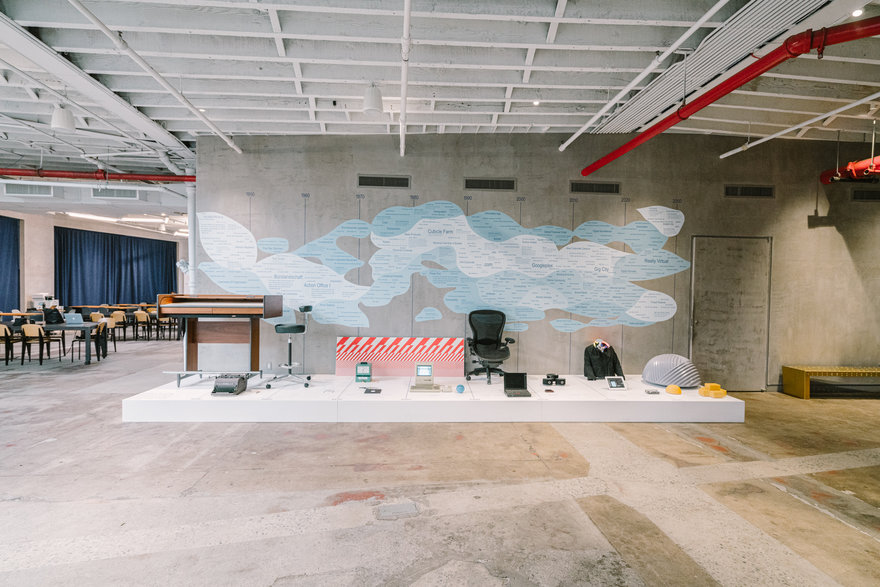 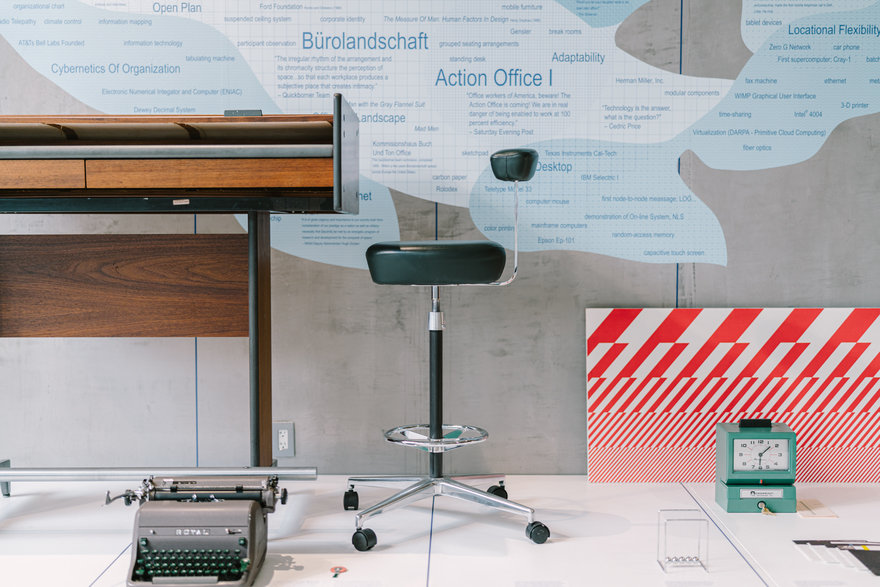 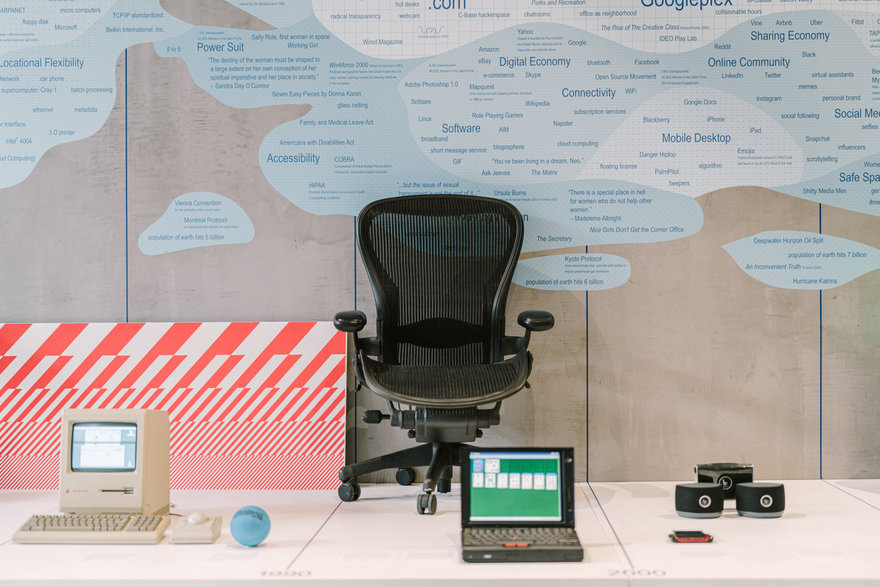 The meatiest component is the Evolution of the Desktop, a graphic timeline that tells "an associative story of how the office evolved alongside global events, cultural and political shifts, labor movements, and pop culture," through the lens of several narrative arcs: from job security to flexibility, hierarchy to horizontality, profit-driven to innovation-driven, control to autonomy, homogeneity to diversity. The cloud-like graphics (likely inspired by Charles Jencks's Evolutionary Tree diagram) express how "these values overlap and bleed into each other, setting the stage for inventions, emergent technologies, IPOs, and work movements," the curators say. "It isn't meant to be a definitive survey from 1920-2050...we intended to create an installation that offered a great deal of information about the evolving office in a single glance."

Beneath the graphic, a standing desk prototype designed by Robert Propst—the originator of the cubicle furniture system—for Herman Miller in 1963 and SO-IL's speculative furniture system designed for Knoll in 2014 bookend an array of workplace innovations, "from the curious to the canonical." 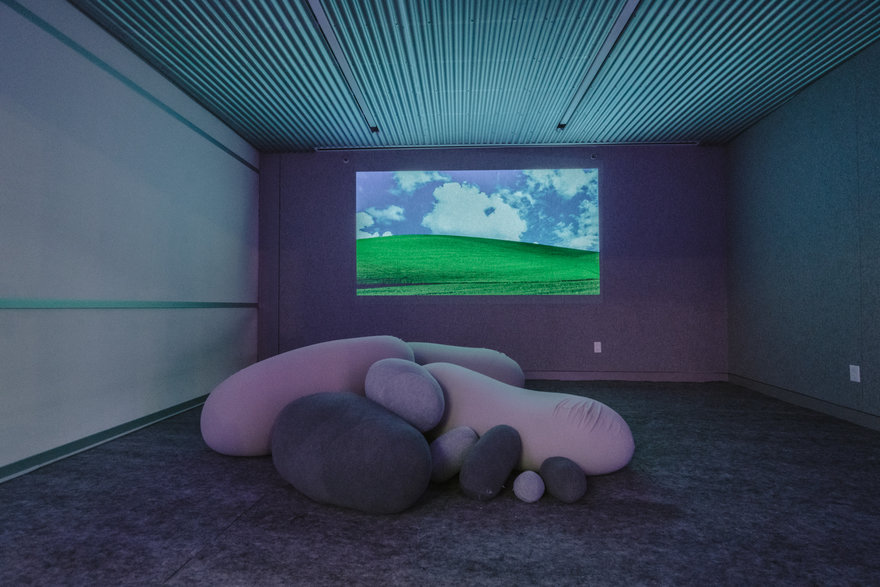 Tucked away in a separate room, the dimly lit space of Wellness 2050 offers a place to rest under the familiar glow of a projection, which shows a bucolic landscape—more or less a stand-in image for wherever a worker would prefer to be. Will conference rooms be transformed into wellness rooms? "With the increasing virtuality of work and nature, spaces for escaping and unplugging from our new reality may be the new normal."

Each distinct installation expands on the exhibition's underlying questions and teases out even more strands of thought to chew on—but don't go in expecting any answers. Ultimately the show hopes to "prompt designers to expand their role in the creation of new, humanistic formats for work."

What do the curators forecast for the future of office design? "Office design has become increasingly about wearables," they say. "Building technology will become smarter over time (like a device) and office technology will catch up to the algorithm."