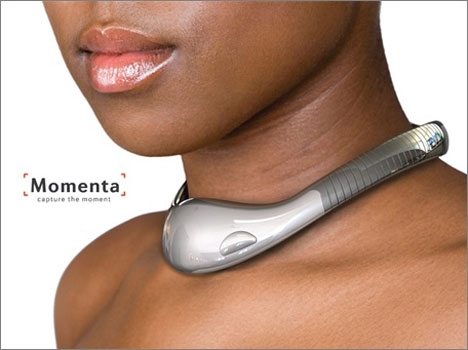 That's the Momenta, one of the finalists in Microsoft's Next-Gen PC Design Competition. The idea behind the neck-worn Momenta PC is that it actively records everything in a rolling buffer and, creepily, reads your pulse; once it encounters an increased heart rate, it TiVo's the previous five minutes, so you can later review whatever it was that caused your pulse to go up. The product copy indicates this would typically be some joking moment with friends, but we're picturing it recording us receiving unfortuitous letters from the IRS, frantically stifling a grease fire in the kitchen and having heated telephone arguments with the landlord, who says he can't fix your heater until July.

Also--folks, c'mon! We don't want to wear a computer on our necks! It's bad enough we have to carry one on our backs!